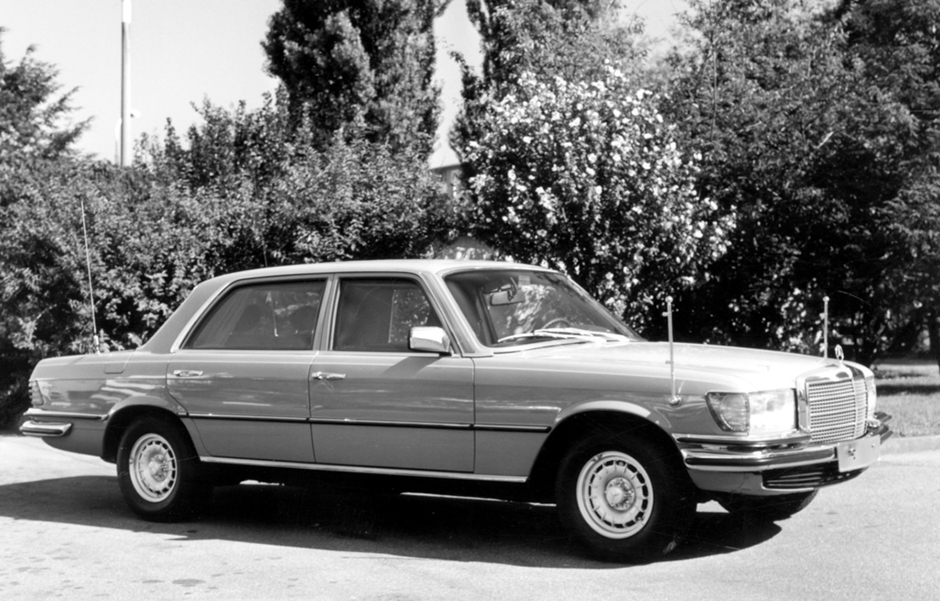 The 116 S-Class was a quantum leap from its 108/109 series predecessor and began MB’s modern era of technology and design. With an array of V8s under the hood, the 116 would soon be considered the finest sedans in the world. Alloy wheels would soon become an available option. The design was a study in parallel design elements. This early 350SEL has been outfitted for diplomatic use.

116 Excellence
Brilliance in the details

There are clear demarcation points in some manufacturers’ histories where new technology and inspired design conspire to create benchmark cars. The 116 S-Class Mercedes was such a design and would become the luxury sedan against which all others competing in that segment would be compared, ultimately including Rolls Royce.

The sober, upright MB designs of the ’60s gave way to a fresh, leaner interpretation of Teutonic automotive style that broadened Stuttgart’s latest premium luxury model’s global appeal. The new model, introduced at the Paris Motor Show in September 1972 could not be considered evolutionary in any manner.

The new 280S/SE sedan was longer (+2.4?), lower (-.6?) and wider (+2.1?) than its 108 280SE predecessor and incorporated a number of subtle design elements that reflected MB’s thorough wind tunnel analysis. The fluted, self cleaning, tail light lens design introduced on the 107 roadsters was integrated along with distinct rain deflectors on the A-pillars that directed water away from the side windows.

Wind tunnel tests with windows down revealed that interior buffeting could be reduced by sculpting the interior door panel caps in a peaked wedge manner. Substantial side moldings were again included but now sitting flush on the coachwork and stylistically connecting front and rear bumperettes. Further visual relief was provided by a horizontal peak line running the length of the coachwork a few mm below the door release handles. The design was study in parallel lines and was consistent regardless of whether one viewed the new S-Class from the front, rear or sides.

The reduced grille height required additional wide cooling vents situated below the front bumpers to keep the car running cool. This was a particularly clean and thoughtful design and one that conveyed agility and power. And safety. The central passenger cell was stronger than before enabling the front and rear crush zones to be weaker. The spare tire now sat horizontally in a snug trunk well and assisted in absorbing rear impact forces.

The fuel tank, historically located just in front of the rear bumper (and a major impact force area), was now located above the rear axle and fitted with a collapsible filler neck. Anti-squat rear suspension geometry was integrated and in a break from 15 years of tradition, the front suspension was no longer supported by a heavy perimeter subframe. Zero-offset front suspension geometry allowed a satisfyingly small turning radius for such a large car. 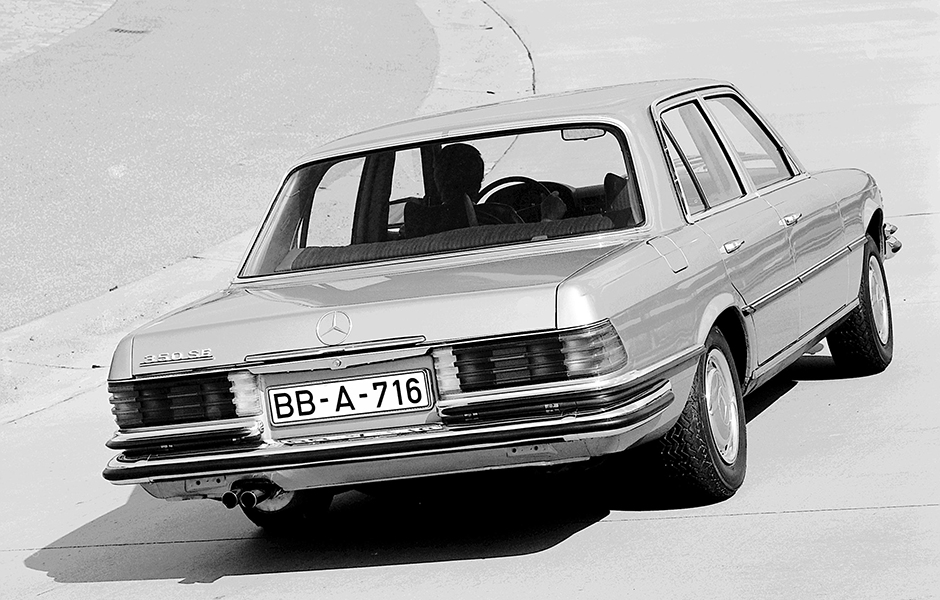 The short wheelbase 350SE was a lively, comfortable and supremely well behaved sedan in its European form. Sadly, US emissions requirements progressively dulled the performance for derivatives of this touring sedan destined for North America. The 350SE debuted to the world at the 1972 Paris Auto Show. US customers received the car later in the year to allow dealers to dispose of unsold 108 models. The long wheelbase edition would not arrive until Spring 1974. The 116 was an undoubtedly handsome sedan.

As with the 108 series before it, the 116 sedans would offer buyers a wide selection of engines that included for the first time a twin overhead cam six cylinder. This new M110 six was offered with fuel injection or a dual compound carburator with outputs in the US of 140 hp and 120 hp SAE respectively. European versions were vastly more powerful at 180 and 160 hp. V8’s included 3.5 and 4.5 liter variants and ultimately the largest engine fitted to a postwar Mercedes, a 6.9 liter dry-sump V8.

Engine development focused on coping with North America’s tightening Federal emissions regulations. While Europeans enjoyed the pure 116 driving experience, North American owners had to make do with detoxed engines in the mid ’70s as Mercedes struggled with solutions to reduce emissions. A US model 450SEL produced a paltry 160hp in 1980, barely adequate for its 4,100 lb bulk. Californians suffered through a few years of the dreaded ‘thermo reactors’ installed adjacent to the exhaust manifolds to superheat exhaust gases in lieu of a proper catalytic converter. Unfortunately, US enthusiasts – and particularly Californians – were deprived of the 116’s true performance for much of the car’s production life. 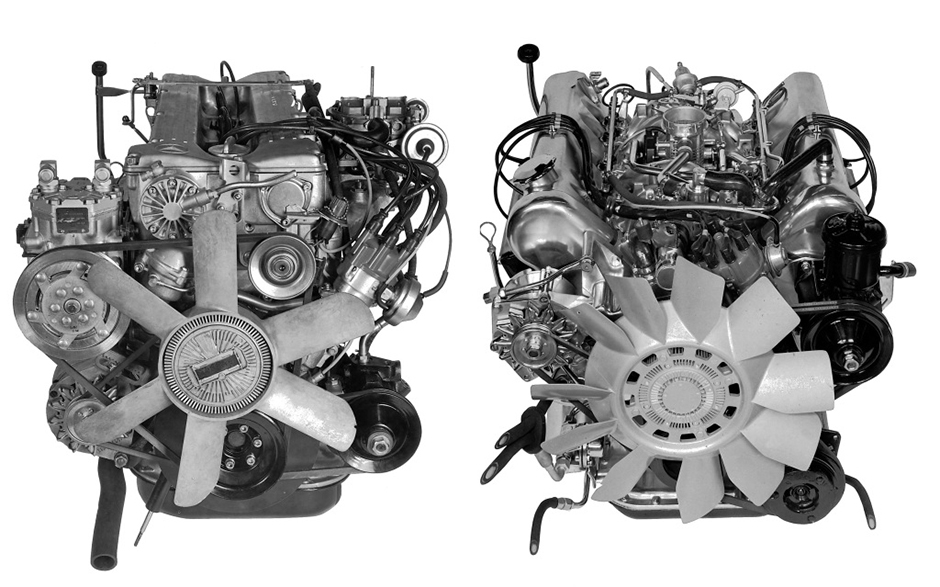 The new “greatest sedan in the world”

When the 300SEL 6.3 arrived in 1968, the motoring world was stunned by the car’s ability to not only carry 4 occupants in luxurious comfort but to do so at sustained speeds only associated with high performance sports cars of the day. The 6.3 seemed beyond challenge from any other manufacturer and it took its creator to construct a sedan that would knock the 300 hp brute off its pedestal as the most competent post war luxury sedan. To do so, Mercedes engineers scrutinized the 450SEL platform and determined which modifications would be required to exceed the 6.3s power, handling and refinement benchmarks.

With the planned specification, the new car would be at least 300 lbs heavier than the 6.3 (the final US 6.9 was a full 450 lbs heavier!) so extra power was going to be necessary to simply equal the 6.3’s performance. To this end the M100 engine was enlarged a full half liter to 6,834 cc resulting in 36 additional horsepower and a 10% increase in torque. To allow the massive new engine to sit cleanly below the 116’s low hoodline, a dry sump lubrication system was adopted with the added benefit of two extra quarts of oil which extended service intervals and reduced oil temperatures.

Complementing the additional power, a sophisticated new self-levelling suspension system was conceived that incorporated oil filled struts that regulated hydraulic pressure to five nitrogen filled cylinders. Absent were any steel springs or conventional shock absorbers. The system was pressurized by an engine driven hydraulic pump and offered both a supple ride quality as well as high speed precision.

Top speed was quoted at 140 but road testers reported almost 150 mph in Europe so the new 6.9 surpassed the 6.3 in that respect. However, the extra 36 hp could not overcome the 6.9’s extra heft and the 6.3 arrived at 6o mph a full second sooner. Quarter mile times were essentially the same. This was an outrageous new car and one that reset the benchmark for a high performance sedan. Mercedes had done it again. It all came at a cost, however, and in the US a 1980 6.9 cost a whopping $52,000 (44% more than a 450SEL). 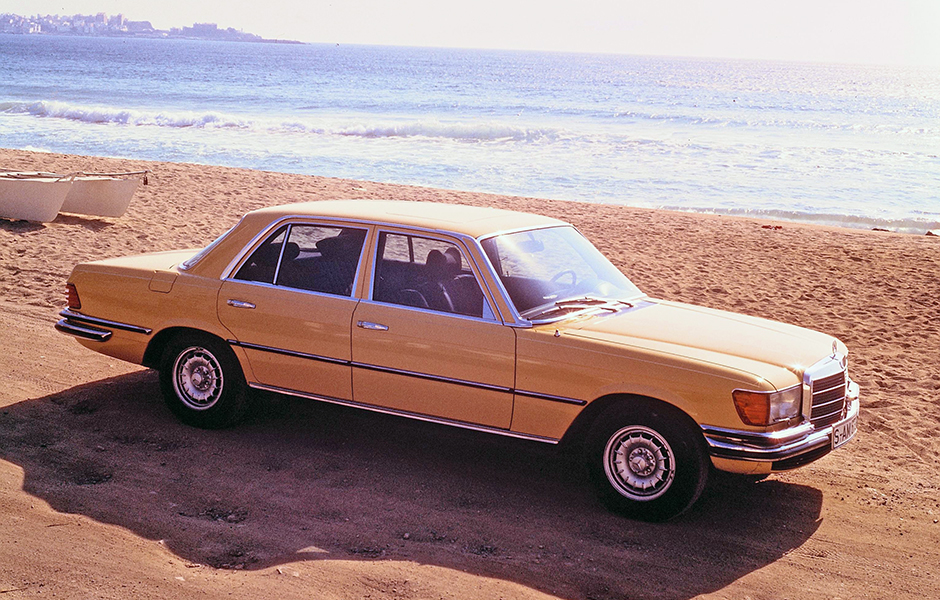 According to Road & Track magazine, the bold new 6.9 was “the fastest, best sedan in the world.” This was a claim that was futile to argue with. Aside from the badge on the tail (which could be deleted by factory order) keen observers could differentiate the car from its 450SEL brother by the fatter 215 series Michelin XWXs and subtly different stance.This is quite likely the only 6.9 you will ever see in manila beige.

The final edition of the 116 series provided a perfect counterpoint to the excessive 6.9 and proved Stuttgart was taking a responsible attitude toward the increasingly fragile supply of fossil fuels. The notion of a luxury European sedan powered by a diesel was generally unthinkable, particularly in Europe. Tastes were changing, however, and the occasional gasoline supply interruptions and attendant price increases provided the right environment for such a car. In a distinctly bold marketing move, Mercedes planned a short wheelbase S-Class fitted with a diesel which would offer much of the S-Class opulence combined with the longevity and frugality of a diesel. The challenge was to offer sufficient power to satisfy the upscale buyer.

At the time of the project’s conception, the most powerful diesel in production was the 3.0 liter OM617 five cylinder producing just 80hp. This was exactly half the output of the entry level gasoline 280S’s 120hp and simply would not do. To boost power to an acceptable level engineers looked to turbocharging technology and specifically to California turbo experts, Garrett AiResearch. This collaboration resulted in a modified turbocharging system fitted to an comprehensively uprated five cylinder diesel that was able to push a experimental C111 around Italy’s Nardo high speed test track at over 200 mph for hours on end. The C111’s 200 hp turbo-diesel was not a candidate for the new SD but its production derivative offered a reliable 115 hp, a full 44% increase over the non-turbo 300D engine.

The new SD arrived on US shores in 1978 and was an immediate success, eventually selling over 28,000 units worldwide during its four year production run. It would out accelerate the 280S, provide over 20% better fuel consumption and consume fuel that (at that time) was less expensive than gasoline. For many, these benefits offset the increased noise, odor and turbo lag attendant with the $30,000 sedan. The SD rounded out a series of luxury S-Class models that offered a wheelbase/drivetrain combination for just about any upscale buyer’s taste during its nine year lifespan. The 473,035 units that found new owners around the globe confirm the 116’s success. 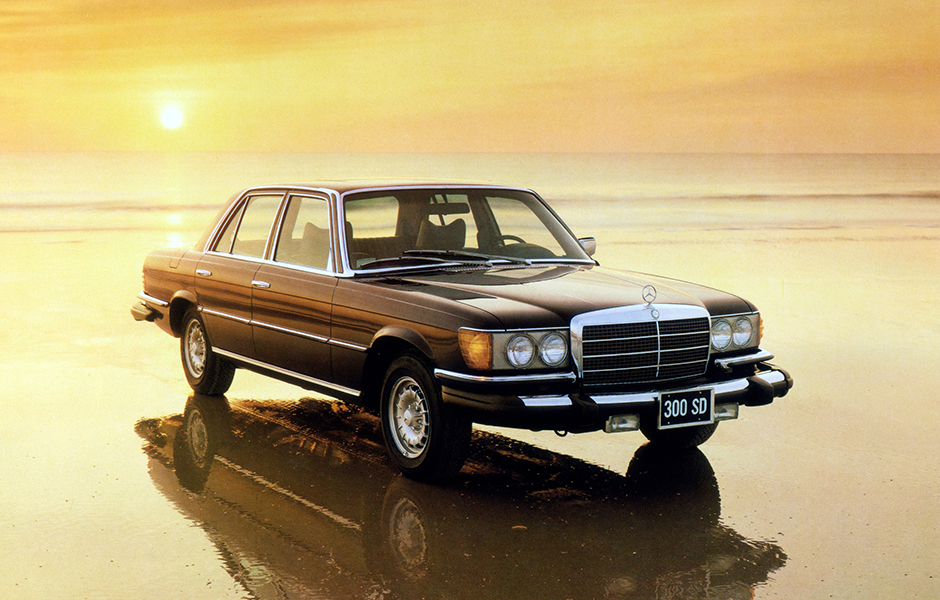 Mercedes ignored conventional wisdom suggesting negligible demand for a luxury diesel sedan and pushed forward with the 1978 300SD. It prove very successful particularly in the US. Its turbo five cylinder’s 115 hp was more than adequate to satisfy frugal minded buyers ready to part with $30,000.