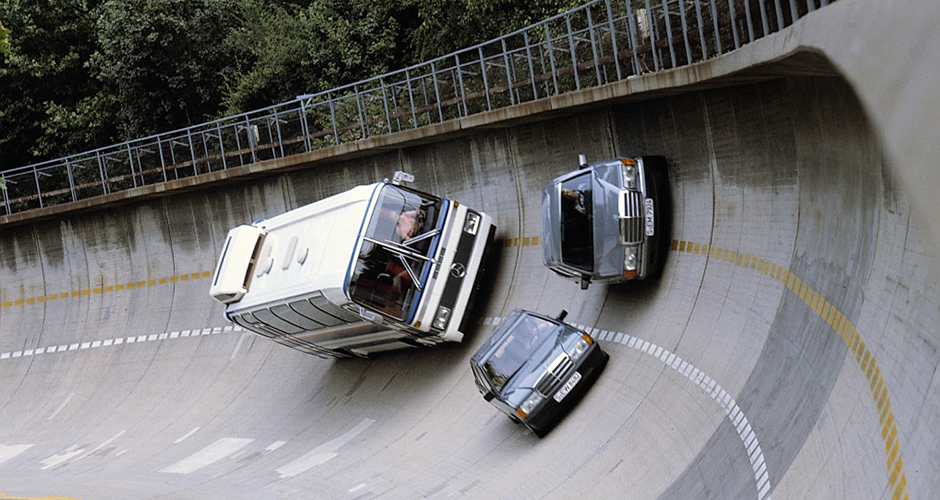 In 1967 the roads of the world converged at Mercedes-Benz in Stuttgart: the scenarios that can be replicated on the company’s test track in Untertürkheim range from storm-swept motorways and slippery wet tracks to bumpy country roads. It was completed 50 years ago, following extensive expansion work. To mark the occasion, the company presented the otherwise top-secret track to the media, on 9 May 1967. The work to extend the test track made it ideal for high-speed, endurance and rough-road testing. The possibilities for testing are as varied as the Mercedes-Benz product range – and, to this day, they continue to provide important input into vehicle development.

Stuttgart. Saloon and truck, Unimog or sports car, bus and racing car: by the 1950s, Mercedes-Benz had the perfect product in its portfolio to suit virtually any automotive purpose. And the model range was steadily being extended, refined and further developed as demand in those early days of the “economic miracle” continued to grow. All of which presented the development department with some major challenges. What was missing, in order for the engineers to meet these challenges as efficiently as possible, was a versatile test track located at one of the major plants. It was an issue whose importance was stressed by Dr Fritz Nallinger, Head of Development of the then Daimler-Benz AG, to his colleagues on the Board of Management as early as November 1953.

Nallinger’s suggestion: a long stretch of company-owned land directly adjacent to the Untertürkheim plant, known as the “bottleneck”, should be given over to building a test track. A planning application was submitted to the City of Stuttgart in January 1955, and in July 1956 the Board of Management of Daimler-Benz AG gave a green light to the proposed investment. As 1957 dawned, the first phase of the test track was taken into operation. The layout at that time already included a skid pad featuring concentrically arranged circular tracks with different surfaces: vehicles can be tested here on blue basalt, concrete, slippery asphalt and large cobblestones. The integrated sprinkler system allows wet-surface testing.

It soon became evident that the test track was still inadequate for the many and varied demands of the passenger car and commercial vehicle testing departments: the engineers were keen for better facilities that would allow high-speed, endurance and rough-road testing. They also wanted to be able to test commercial vehicles on steep inclines. The site was therefore gradually extended to accommodate all these ideas. 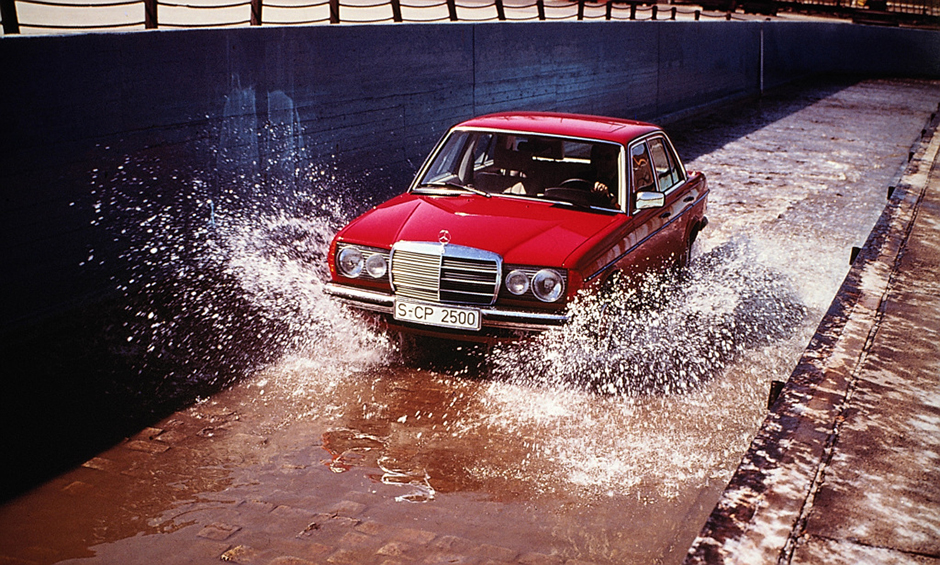 A Mercedes-Benz 123-series Saloon drives through a water basin on the test track at the Untertürkheim plant.

Activities on the test track are normally conducted in secret since, after all, this is where Mercedes-Benz also tests the prototypes for forthcoming series models. However, once the extended and improved facilities had been completed, Mercedes-Benz seized the opportunity to present the full details of this new, major platform for vehicle development to the media, on 9 May 1967. The cumulative length of all test sections is 15,460 meters, including 3018 meters of high-speed test track. The two parallel tracks are connected by steep-bank curves with a diameter of 100 meters. A source of wonder back then were the seven different incline sections with gradients of between 5 and 70 percent, along with the steep-bank curve with a transverse inclination of as much as 90 degrees. A maximum speed of 200 km/h is theoretically possible on this steep banking, but this would physically be almost unendurable for a human being.

For long-term testing purposes it is particularly important instead to be able to drive through the steep-bank curve at 150 km/h with no hands on the wheel. At this point, namely, there are no longer any lateral forces impacting on the tyres and the vehicle remains on track through the bend without any steering input. The driver’s weight nevertheless rises by a factor of 3.1, pressing him or her into the seat.

Another indispensable part of endurance testing is the “Heide”, or heathland, test section. This rough-road track in Untertürkheim was built to scale to replicate a particularly poor stretch of road in the Lüneburg Heath in the north of Germany as it was in the early 1950s, hence its name. Here, as on other so-called washboard, boneshaker and potholed sections, is where Mercedes-Benz submits its newly developed products to lengthy endurance testing. Tests like these are so stressful that drivers have to change over every two hours. Further features of the circuit include extreme distortion tracks for commercial vehicles and off-roaders, along with ramps used to force extreme spring compression and rebound.

Handling safety in adverse weather conditions is tested with the help of a 34-metre-long crosswind section. This features 16 blowers, designed to produce gusting side winds of speeds up to 100 km/h. A world first was the slalom section introduced by the head of vehicle testing at the time, Rudolf Uhlenhaut. This was a stretch of track designed to test the driving stability of suspensions at high speed and during abrupt changes of lane, using measurement loops embedded in the road surface to deliver electronic data. Such data is used in conjunction with the test driver’s personal assessment to evaluate the suspension tuning. For the purposes of precise analysis, the tests have also always been recorded using radar, other measuring equipment and on film.

Since the expansion work was completed 50 years ago the 8.4-hectare site, with its cumulative 15.5 kilometres of different test tracks, has continued to be adapted constantly to new conditions. A section of road with a low-noise “whisper asphalt” surface, for example, was created for the measurement of noise. This continual updating of the test track in Untertürkheim means that it remains, to this day, an important development tool for new technologies and vehicles. 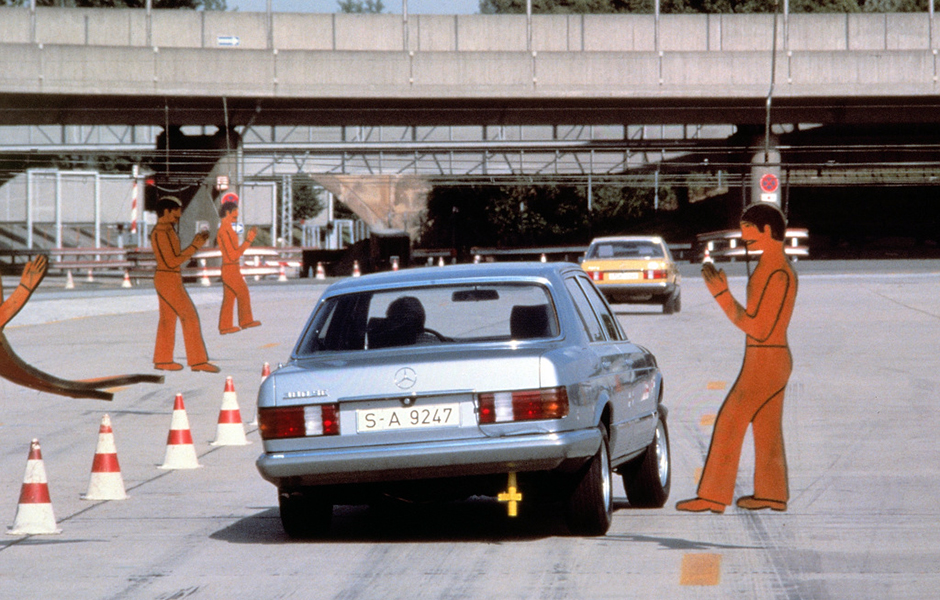