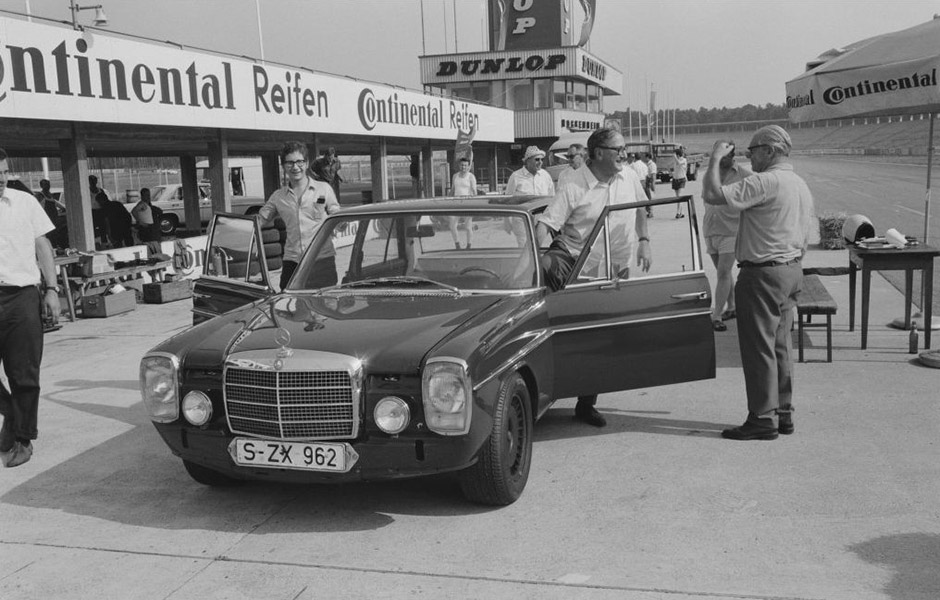 Rudi Uhlenhaut (far right) greets a journalist who has just been out on this competition prepared 115 sedan.

Competition 1969
Making do with sedans

It had been a good fourteen years since Mercedes was absolutely “all in” regarding their global motorsport commitments. Le Mans 1955 emphatically and tragically ended MBs global domination of both Grand Prix and sports car racing with their complex and enormously noisy W196 and 300SLR models.

Competing internationally in 1969 was not going to require Zwangsteuerung (Z-drive) valve trains, an unlimited budget and exotic fuel blends. The cars that carried the Silver Star competing in events around the world were of the “off the shelf” variety in 1969 and featured four doors.

Interest naturally turned to the muscular new 300SEL 6.3 and both Mercedes-Benz and some privateers campaigned modified editions with some success. Buoyed by Erich Waxenberger’s win at Macao on the coast of China in 1968 aboard a RHD 6.3, Rudi Uhlenhaut entered a team of three 6.3s for the prestigious Spa 24 hour event for touring cars in 1969. Drivers would be Waxenberger, Hans Herrmann and the man who had triumphed at Le Mans a month earlier in a Gulf Oil Ford GT40, Jacky Ickx.

While the three 6.3s were quick in practice, tire chunking plagued the team and Uhlenhaut chose to withdraw the cars prior to the start rather than risk high a speed tire failure. Tire life would be the bane of the 6.3’s racing career.

“Among the epic group of cars at the 1969 Hockenheim press day was an obviously carefully prepared 250(?) sedan” 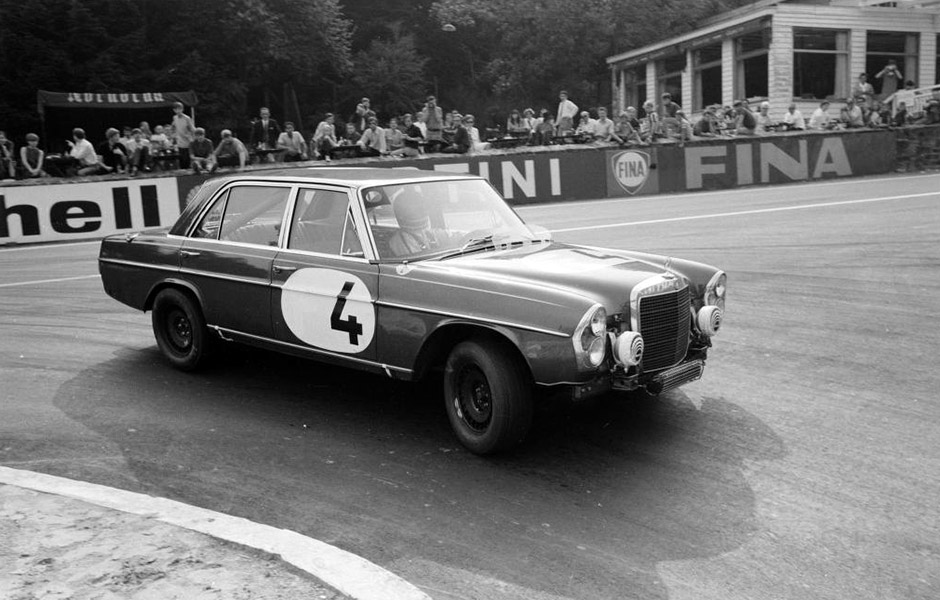 MB’s second official foray into International Motor Racing with the newish 6.3 occurred at Spa Francorchamps for the 24 hour event for saloons. This looks like Jacky Ickx tipping the heavy 6.3 into the La Source hairpin during practice. Tire issues forced the team to withdraw all three cars prior to the race. 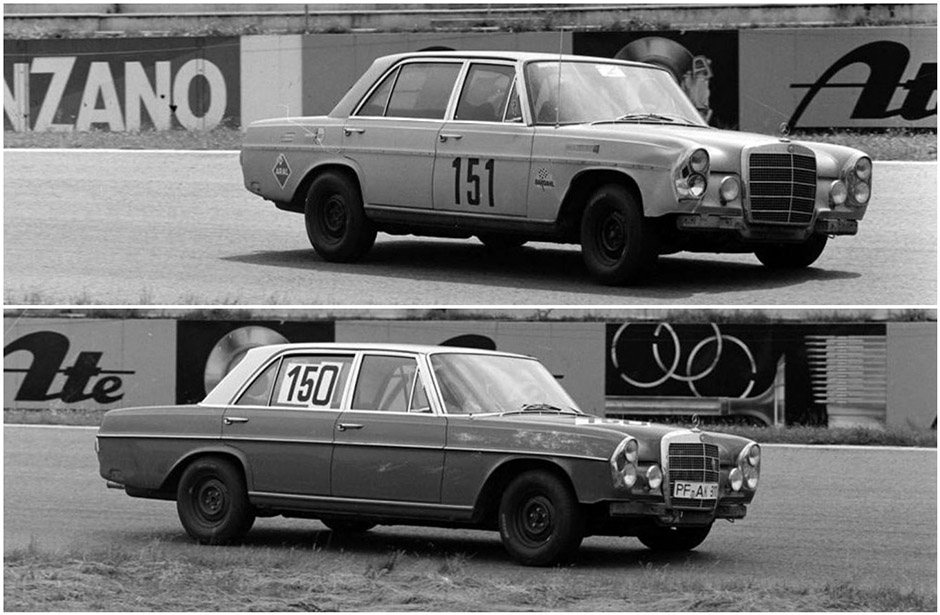 If you were a fairly wealthy MB enthusiast and wanted to have a go at saloon car racing in Europe, you might pull the bumpers off your 6.3, install a roll cage and have a go. These 300SELs are pounding around the Solitude circuit near Stuttgart. I wonder what the two-tone scheme of the bottom car was?

Six Cylinders to the rescue

There were other alternatives if one wished to pilot an MB on the track in 1969 and opting for a 109 or 115 series six cylinder was far easier on the budget, not to mention the tires. Endowed with extraordinary durability and driving comfort if not an excess power, MB sedans were excellent rally candidates as demonstrated by the factory’s 1960 Monte Carlo rally win using a 220SE fintail sedan.

While Gerd Schäfer and Helmut Ratjen were entered and evidently practiced for the 1969 Monte in their 300SE, they were nowhere to be found among finishers nor retirements. Perhaps a reconnaissance off?

And for those after more seat time to master the Ring’s interminable bends and plunges, there was the Nurburgring 84 hours. Yes, 84 hours racing through the mist and gloom of the “Ring”. The pilots of of the lightly modified 250 sedan must have developed foot cramps from the long stretches of having the throttle “matted” during the three and a half days of competition. Must have been great fun, however. 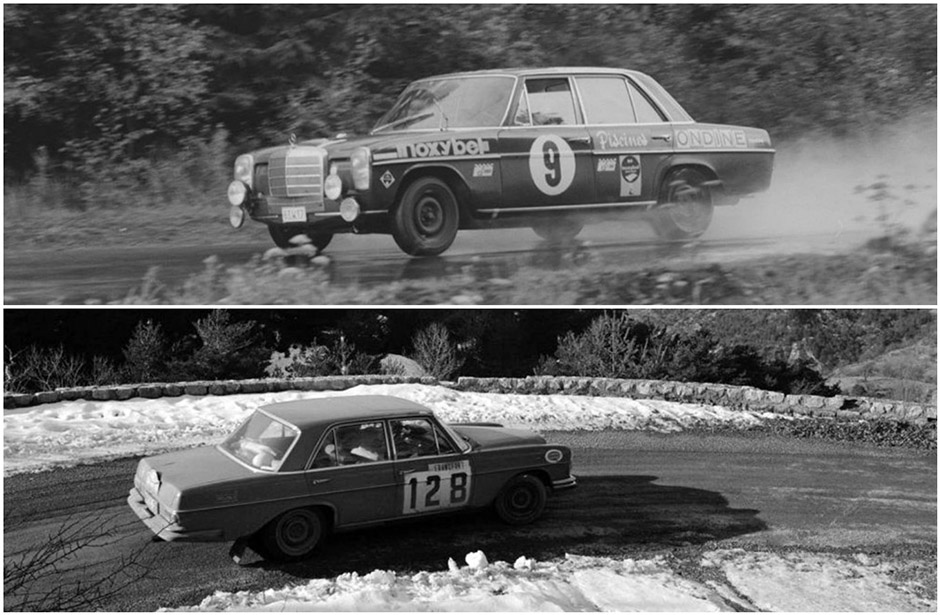 Top: 84 hours at the rainy “Ring” aboard a 250: What this 250 sedan lacked in horsepower was offset with candlepower! Bottom: Evidently Gerd Schäfer and Helmut Ratjen completed some preliminary reconnaissance laps in their 300SE in preparation for the 1969 Monte Carlo Rally but did not start the event.

Among the epic group of cars at the 1969 Hockenheim press day was an obviously carefully prepared 250(?) sedan. I have to presume its was a Mercedes project based on its presence and the attention it’s receiving from Rudi Uhlenhaut in the image at the top of this page.

Have a close look at the trick wheels that have been installed. Prior to these Karl Ludvigsen images, I’d never read a word about the car nor seen an image. Looks superb to me and I presume it’s a 250 fitted with a manual gearbox. Fantastic car and something I’m temped to re-create…. 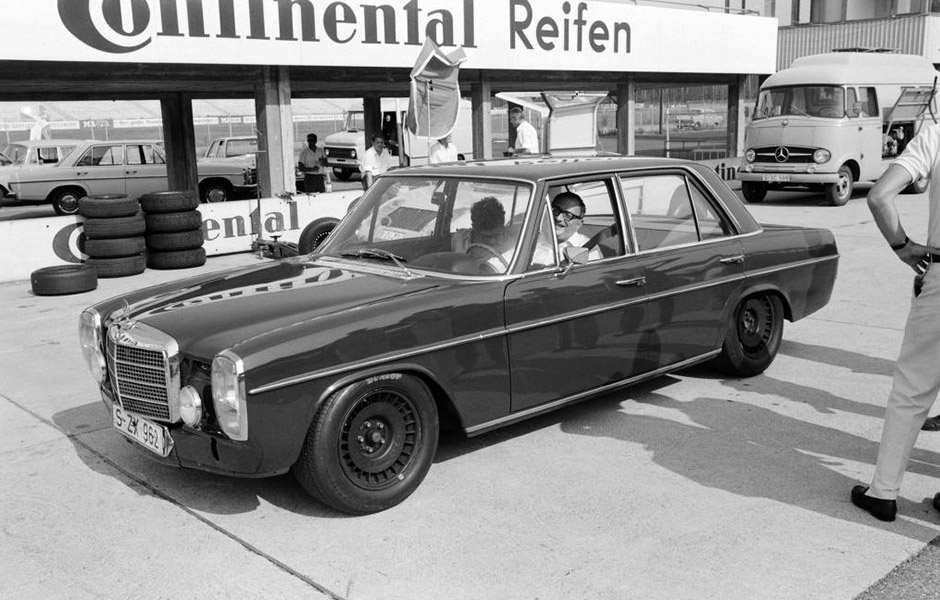 Have you seen a cooler 115 sedan? I haven’t. Have a look at the special cast finned wheels and the absence of a rear seat. Earlier in the day the car circulated with bumpers attached.