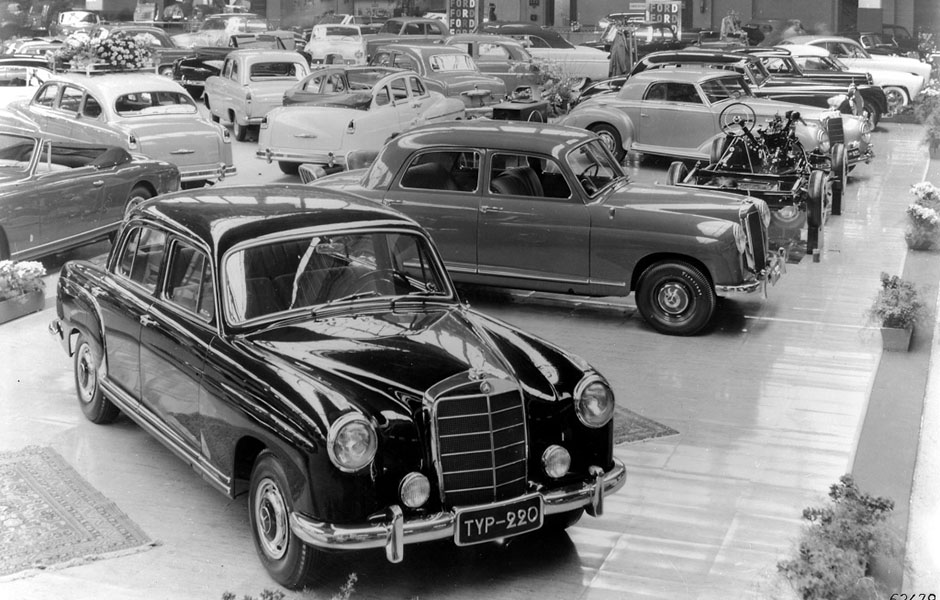 1956 saw the debut of the S (Super)-Class Sedan as we know it today. A derivative of the successful 180 ‘Ponton” sedan series introduced in late 1953, the 220S initiated the hallmarks of today’s S class; long wheel base, upgraded exterior adornment, top range engine selections and touring comfort. 55,279 220S’s were constructed from 1956-1959.

S is for Super
Refinement, power and prestige

While the fabulous new 2013 S-Class Mercedes-Benz sits securely and distinctly atop Daimler’s 4 door range of offerings, the first postwar Mercedes sedan to be worthy of the S or “Super” designation had its beginnings within the humble 1953 180 ‘Ponton’ sedan. This milestone model introduced unique new technologies that included a perimeter platform chassis and an engine/suspension mounting system that led to the series nickname: the Pontons. Creating a subframe to which both the front suspension and engine were attached via three rubber mounts allowed efficient assembly and provided additional driving refinement.The entire engine/suspension assembly could be dropped out of the car as a unit, hence the Ponton moniker.

To create a volume luxury model for the masses, Daimler stretched the 180’s wheelbase 4?, added their improved 2.2 liter carburetored six-cylinder and adorned the coachwork with attractive chrome trim that flowed elegantly rearward, neatly tracing the front and rear fender creases. A new rear axle design, the race bred single-joint swing axle, appeared for the first time and provided improved handling. Extra rocker trim and additional brightwork outlining the side windows resulted in a rich looking long wheelbase sedan. Full wheel covers and additional driving lamps mounted on the front bumpers completed the up market model. And so the modern S-Class was born. 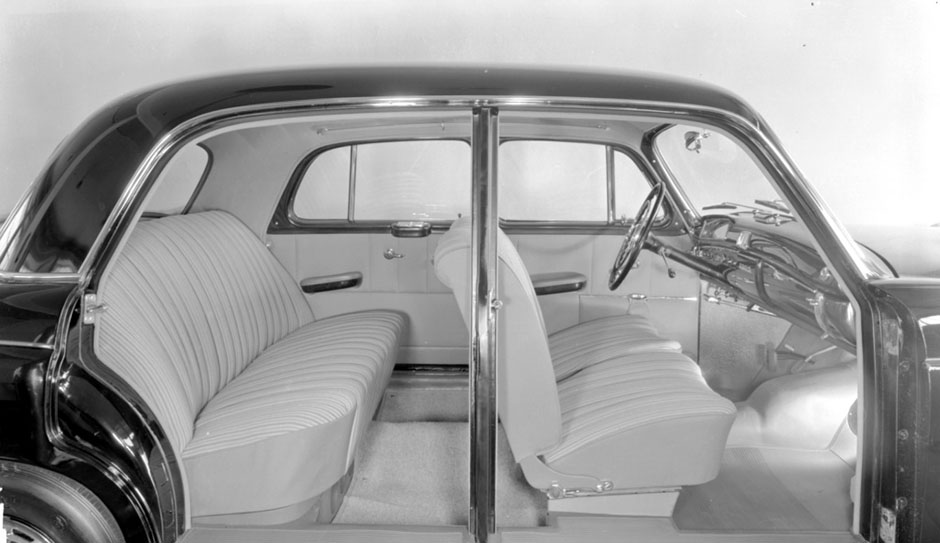 This was state of the art for a luxury European sedan of the middle ’50s according to Mercedes-Benz. Austere in its execution but utilizing fine materials and a sensible layout, the 220S cabin was cozy and logically laid out but was faintly reminiscent of the latter ’40s. The perceived sense of luxury symbolized by the massive slab of dash wood would evaporate in a few years. 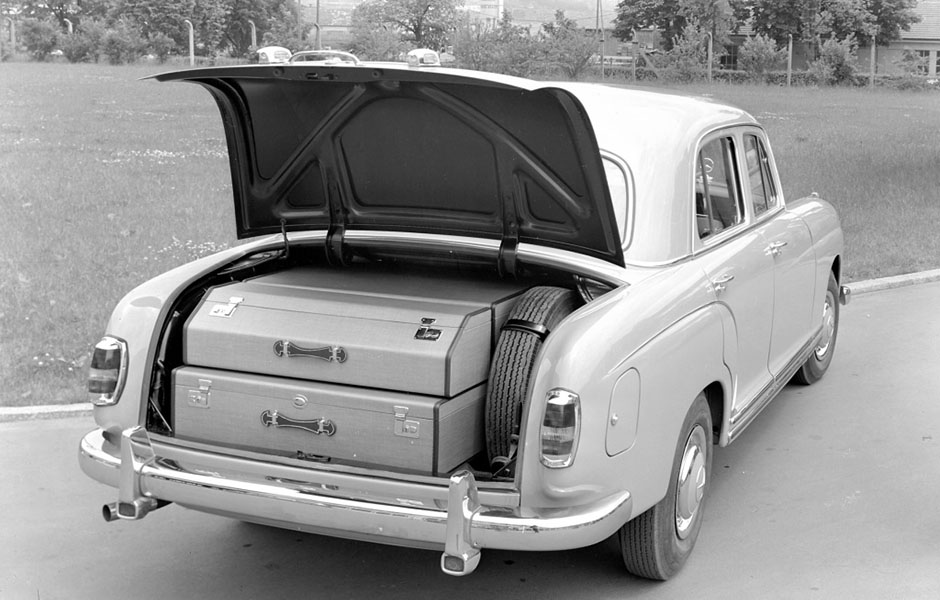 Fitted luggage was a option found in most Mercedes products of the day and made touring the Continent rather more civilized. The 220S weighs about 1,000 lbs less than the new 2013 S-Class.

Fuel Injection for the masses

Having created the first production automobile fitted with fuel injection in 1954 (300SL Gullwing), Mercedes was doubtless eager to integrate this new technology into their new upper range cars. The Gullwing was a highly specialized, low production endeavor but the 220SE that debuted at the Frankfurt auto show1958 would be the first fuel injected automobile available to the mainstream buying public. Unlike the Gullwing’s direct injection, the 220SE system’s injectors were installed externally, adjacent to the intake manifold flanges where bolted to the cylinder head. While the power increase over the carburetor version was a scant 9 hp, refinement and fuel mileage improved and torque increased a substantial 26 ft/lb.

The new Ponton S-class still lacked an increasingly essential item found in most luxury sedans of the day: an automatic transmission. Determining that a conventional fully automatic transmission would sap too much of the 220’s meager horsepower, Daimler opted for a semi-automatic system devised in conjunction with Fichtel and Sachs. The system utilized the standard 4-speed manual gearbox but replaced the lever actuated clutch assembly with servo actuated clutch assembly using a fluid coupling to damp gear selection loads. In theory, eliminating the need for a driver to bother with depressing a clutch during shifting seemed a sensible benefit of the system although one still had to lift off the throttle during shifts. However, in actual use the system proved frustrating to use as any casual pressure on the column mounted shift lever automatically engaged the clutch resulting in increased clutch wear. The system was not friendly to the clumsy driver. This combined with spotty reliability of the various switch hardware eroded the initial enthusiasm from buyers and many cars have been subsequently converted back to the conventional fully manual gearbox. 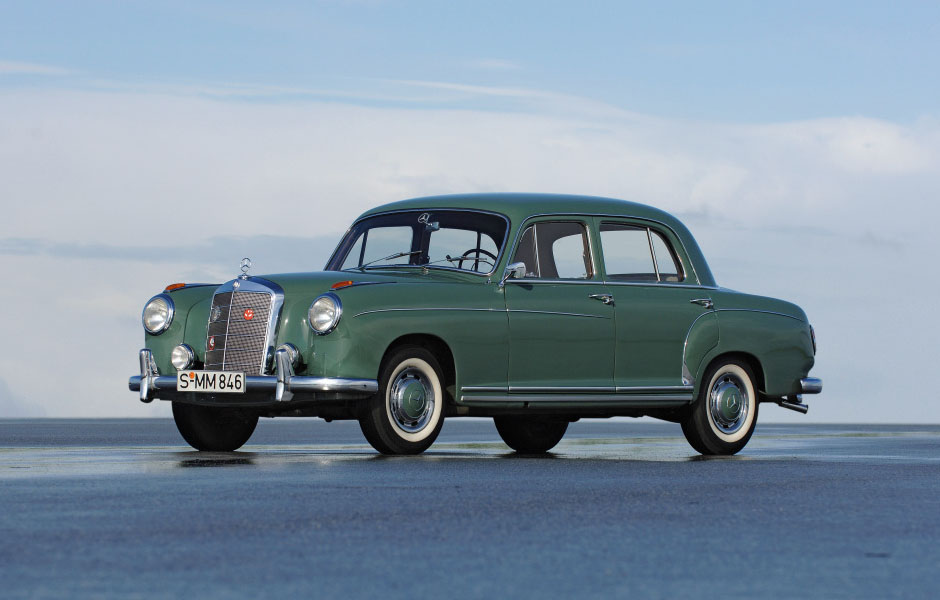 Charming and particularly durable, the Ponton 220S/SE range was the basis for the massively popular S-Class of today.

Which Ponton S series is collectible today? Franky, any highly preserved, original, example will find a buyer. However, all things being equal, a 220SE with the vast Webasto sliding canvas roof and a conventional manual gearbox would be something to cherish. Unfortunately, based on the total 220SE production, a 220SE in that specification is rarer than a Gullwing. Of the 1,974 injected 220s constructed, I would surmise less than 100 were ordered with the cool sliding roof option.

As the ’50s came to a close the sober Ponton design was showing its age both from a technical and styling standpoint. A total of 57,253 (55,279 220S/1,974 220SE) Ponton S-Class models had been sold between 1956-1959. Detroit was well on its way down the path of new found power and aviation inspired designs in the latter ’50s. In contrast the soft curves of the Ponton design had become quaint and dated. This would change as the S-Class matured to greet the ’60s. 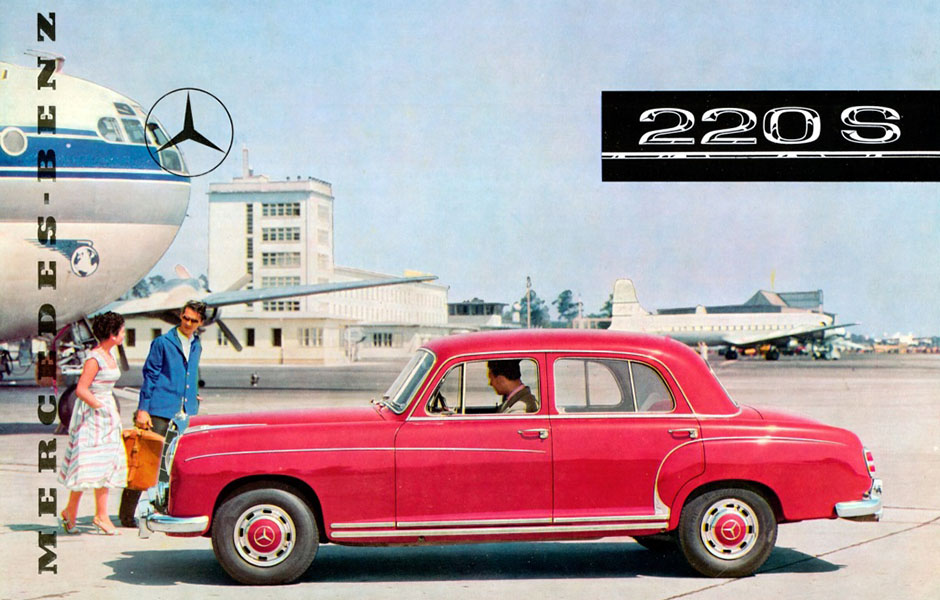 Period brochure conveys the upscale lifestyle of the potential S-class Mercedes-Benz clients in the latter ’50s.