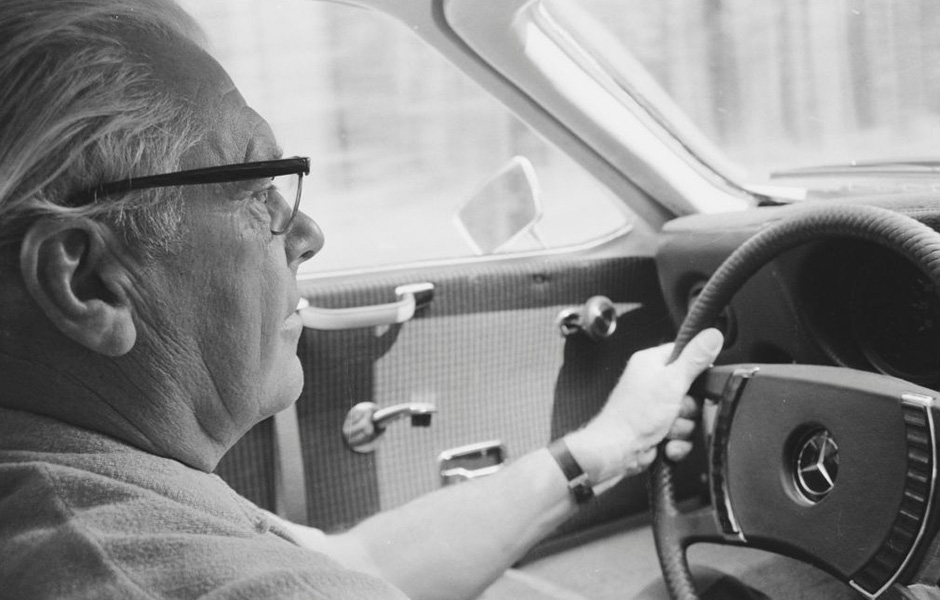 Rudi Uhlenhaut demonstrating one of the Wankel engined C111s.

Successful tractor manufacturer Ferruccio Lamborghini stunned the motoring world in spring 1966 when he revealed his audacious mid-engined Miura P400 at the Geneva Motor Salon. The rolling chassis was shown a year earlier and in a massive display of confidence in Bertone stylist Marcello Gandini, orders rolled in despite barely a hint of a final design.

The breathtaking P400 undoubtedly caught MB engineering Chief Rudi Uhlenaut’s attention and the instant backlog of orders was not lost on the shrewd Uhlenhaut. A modern mid-engine Mercedes was an idea that had been percolating for a few years and a design study for such a car had been completed in 1964.

With a parallel program also underway at MB to develop new engines based on Wankel rotary technology acquired in October 1961, studying the Lambo at Geneva just may have sparked the epiphany that resulted in Uhlenhaut combining the two programs. 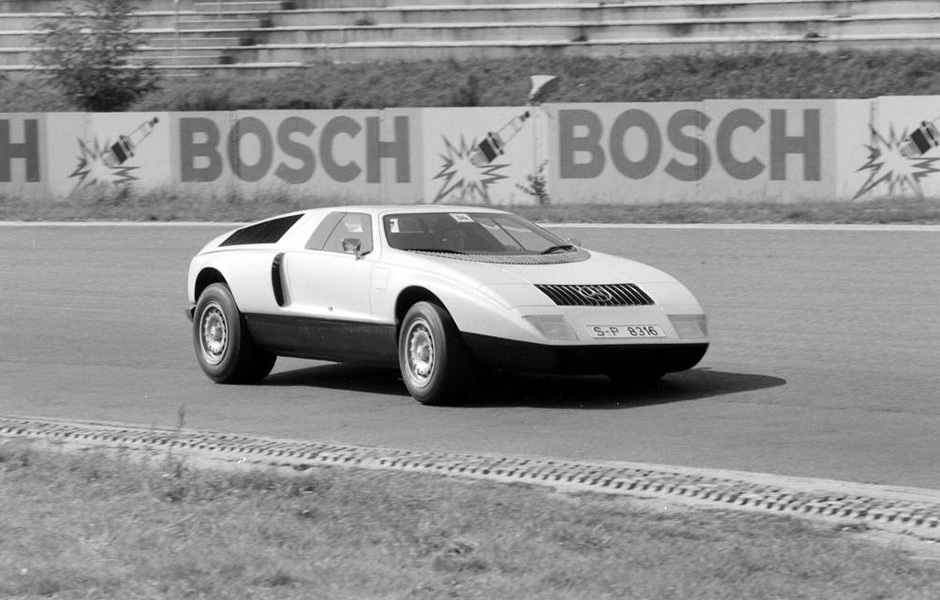 Pressing on at Hockenheim. Note the enormous rear tires and the first appearance of well vented forged alloy, and soon to be known as “Bundts”, wheels. Fabulous looking car, if somewhat bulky.

What the press saw during an extensive new model preview at the Hockenheim circuit in 1969 were various iterations of the evolving C111 project, with at least two fitted with three rotor versions of Felix Wankel’s design. There was a C111 fitted with the new 3.5 liter V8 in existence but I’m not sure it was at this event. Those that drove the cars experienced a fairly refined mid-engine 280 hp (for the Wankel cars) road car that was capable of 165 mph and whose cockpit you entered in the same fashion as another groundbreaking model introduced in 1954; through up-swept Gullwing doors.

The shape of the road cars was indeed dramatic and featured very tall front fender and cowl surfaces that flowed via an equally tall belt line to a slightly tapered tail. Engine bay cooling air was sourced via a prominent vertical air intake slot just ahead of each rear wheel arches. It was a muscular automobile whose styling cues undoubtedly linked it to Mercedes-Benz and the tartan plaid interior trim left no doubt about its creator’s racing heritage. 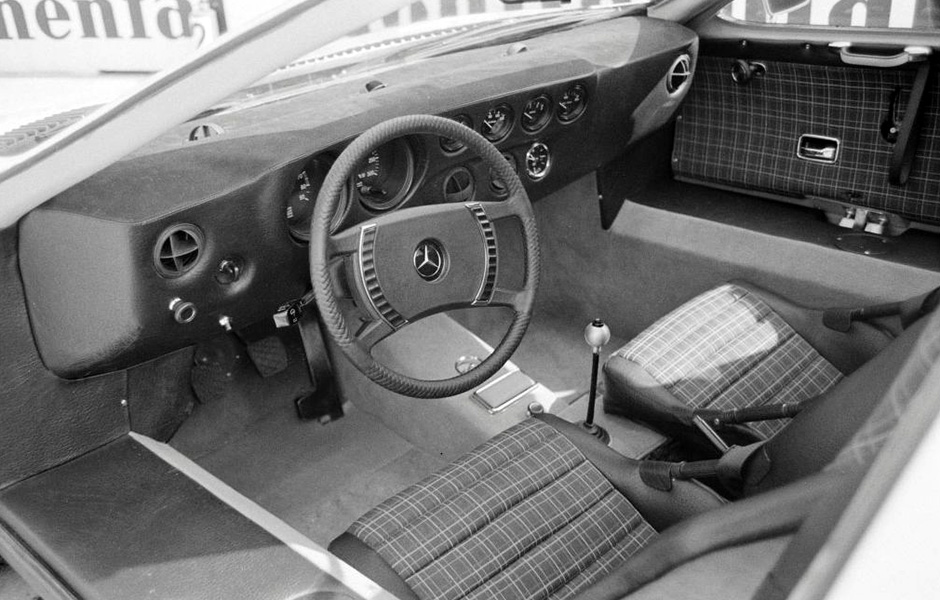 Spacious interior reveals the steering wheel design that would arrive in 1971 with the new 107 series and the traditional plaid seat trim recalling the Silver Arrows of the past. 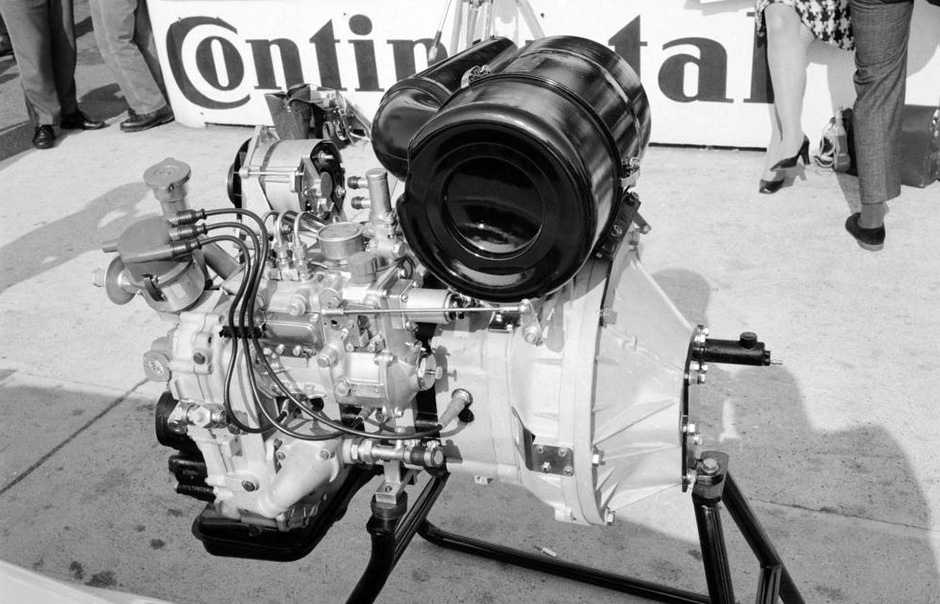 While not an artistic triumph in mechanical design, MB’s three rotor Wankel engine was potent and compact. The addition in 1970 of a fourth rotor resulted in a potent and, at 396 lbs, light package that produced 370 hp.

And so, what happened to this daring project? Gordon Wilkins summed it up nicely in his Cars of the Year review in the 1969 edition of Automobile Year, “Mercedes-Benz’ C111 mid-engined coupe with triple-row Wankel engine proved to be a way-out car but something of an enigma.”

Unlike Mr. Lamborghini, C111 collaborators Messrs Uhlenhaut, Bensinger and Derndinger faced a conservative board of directors and conflicting priorities, not to mention tightening emissions and safety requirements. Those waiting for an audacious offering from Mercedes would have to wait a further three decades for the CLK GTR coupe and roadster street homologation specials. 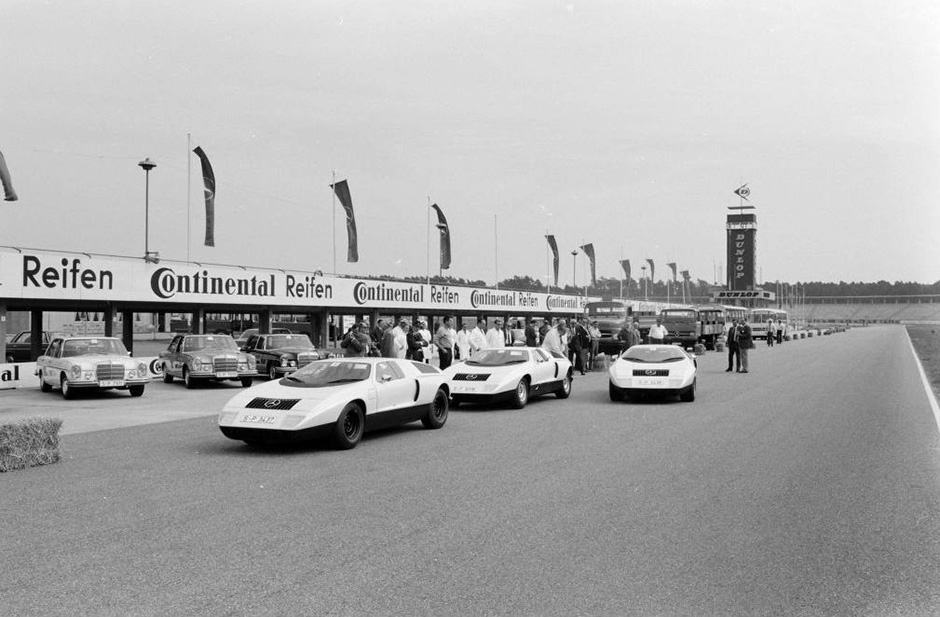 A trio of C111s trundle out of the pits, each fitted with a different wheel/tire combination. A portion of the full 1969 model line can be seen assembled at the pit wall.