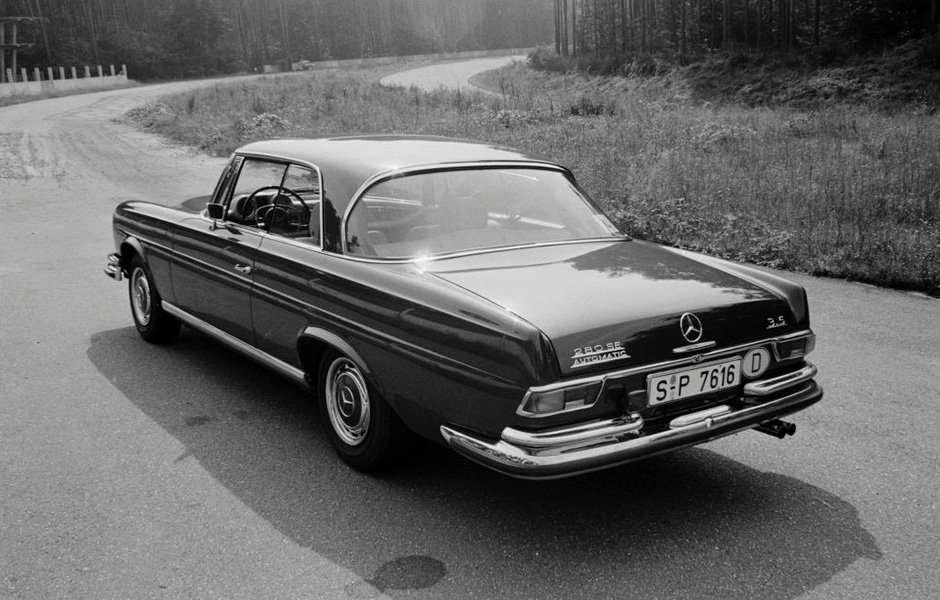 In the latter ’60s, the fact that the lovely 111 series coupes and cabriolets were getting rather long in the tooth was not lost on Mercedes-Benz.

Introduced in 1962, the series had progressed through three engine revisions; 2.2 liter, 2.5 liter and the 2.8 liter of 1968. Horsepower rose steadily from 134 to 170 and finally to 180 with the 280SEs. While this was progress, these figures were always fairly anemic compared to what drivers enjoyed in MB’s looming target market; the United States.

Converting more Americans to premium Mercedes products would require an alternative to high revving 2.8 liter sixes connected to laughably low final drive ratios. The massive 6.3 liter V8 was certainly not for the masses so something less intimidating and more refined was in order.

“The design transition from 3.5 coupe to SLC lacked inspiration but would be righted a decade later with the also sublime 126 coupes of 1982.”

The solution was demonstrated to the world at Hockenheim in 1969. Reflecting the lifestyle of many of its future buyers, MB’s new M116 3.5 liter V8 also provided “effortless power” and when installed in the subtly restyled 111 coupes and cabriolets, provided an altogether “grander” touring experience.

As is so often the case with certain gifted automobile series, the end-of-series models finally satisfy what early buyers longed for. With the introduction of the 280SE 3.5 coupe and cabriolet, complete automotive harmony was achieved. Well, almost. The 4 speed automatic was slightly frantic at times compared to the seamless power of say…a 1969 Buick Skylark GS. Nevertheless, the pillerless two-door 3.5s soon epitomized that over used notion of “timeless” design. 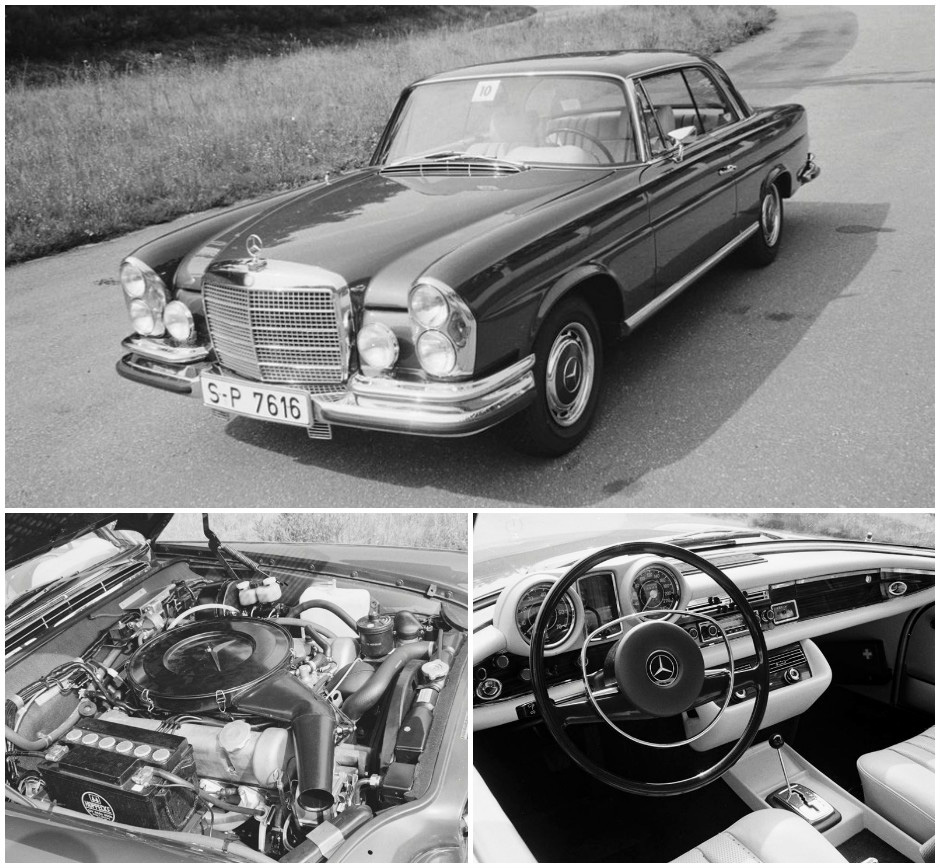 Bringing the beautifully balanced original Paul Bracq design up-to-date simply required re-profiling the hood and grille and adding rubber impact strips to reduce the visual mass of the bumpers. Producing about 230 HP, the new 3.5 liter V8 was the element that created a true grand tourer. The AC unit was reasonably well integrated within the beautifully constructed interior.

The coupe we see here is actually the very first example constructed, serial number 000001 as evidenced by the image of the ID plate Karl Ludvigsen carefully photographed. To kick the new two-door V8 range off with some panache, The Germans painted the first coupe 571 brilliant red and trimmed it with beige leather, a dramatic combination.

While it was fitted with air-conditioning and the desirable floor mounted automatic transmission selector, it lacked a sunroof and power windows. As those who were able to hurl the car around Hockenheim this day undoubtedly learned, the new V8’s extra 40 HP livened things up dramatically. This fabulous final revision of the 111 coupe would be a car that attracted clients with an appetite for supreme quality, understated elegance and a little power underfoot.

The 3.5 extended the aging series while the upcoming 350SLC was being finalized and while I’m a fan of the SLC, the 3.5 coupe has weathered the test of time with far more success. The design transition from 3.5 coupe to SLC lacked inspiration but would be righted a decade later with the also sublime 126 coupes of 1982. 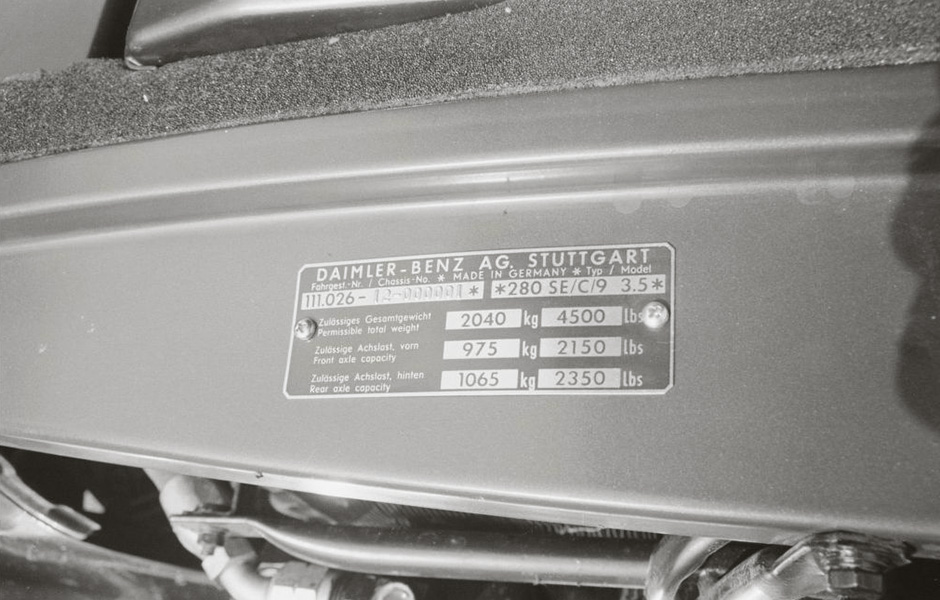 No mystery here; the press car shown is the first 3.5 coupe constructed.

History dictates that the very first example of an epic and typically short lived generation of automobiles should eventually be rewarded with collectable value. How did the first 3.5 coupe do over the years? The brilliant red coupe #000001 popped up at Bonhams’ Mercedes sale at the MB Museum in July 2014 and was knocked down for $115,713 including buyer’s premium. A well earned result in my mind. Who knows what it would take to pry the car away from its owner today? 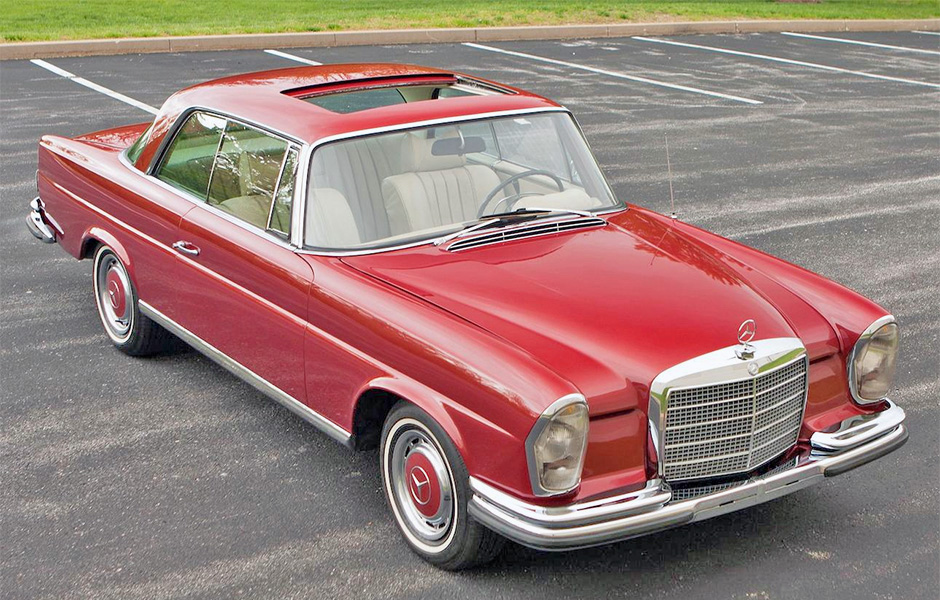 3.5 coupe #000001 was offered in July 2014 at Bonhams’ Mercedes-Benz sale conducted at the MB museum and bought $115,713. Comparing this image to its debut images reveals it’s lost the massive driving lights and the “fanfare” horns. Does its new owner realize this? Fabulous color/trim combination. I wonder who owns that last 3.5 coupe produced?

The press also were treated to what is today the most valuable of the entire 111 series; the new 3.5 Cabriolet. While shown in the somber combination of (probably) white/black, the car nevertheless exuded prestige and carefree continental top-down opulence. The next open four passenger convertible from Stuttgart was a full 24 years away and that void fueled a steady rise in used 3.5 cabriolet values. $400k is occasionally touched today by exceptional examples. 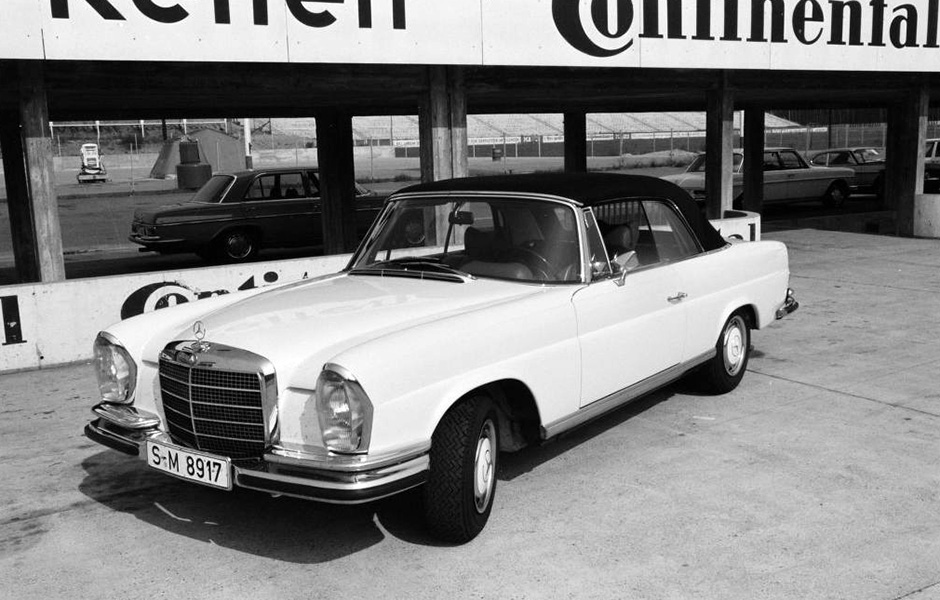 The cabriolet was beautifully proportioned and the soft top would stow fairly cleanly under a finely constructed leather boot cover. The fabulously clean design is revealed here with no driving lights – and no US side markers – to interrupt the symmetry of the nose. Is this serial number 000001?