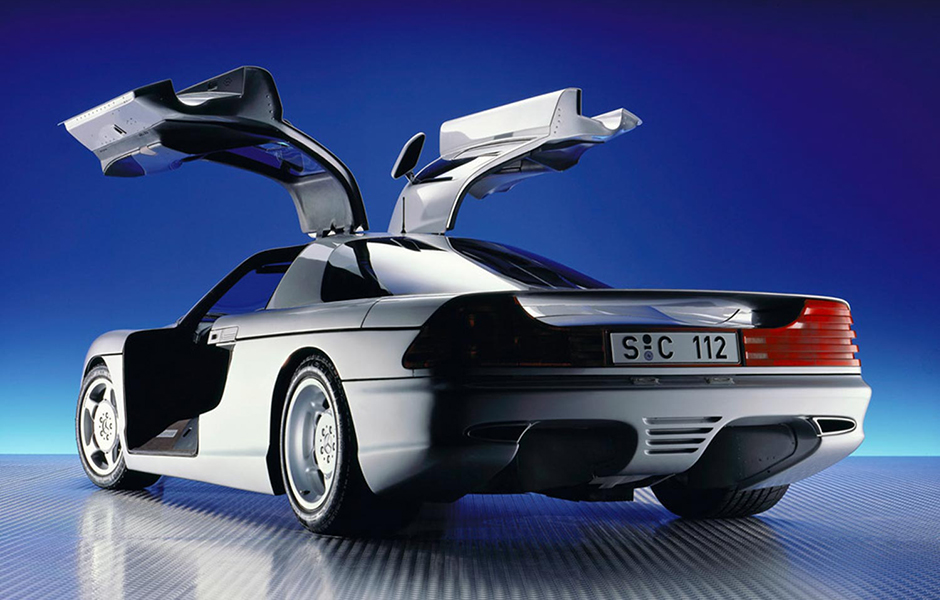 The Gullwing had an opportunity to return via the C112 program of the early ’90s. But this car ultimately served only as a test bed for many technical advances that would be embodied within future Mercedes.

The Mercedes-Benz display at the 1991 Frankfurt Motor Show contained a mid-engined Gullwing coupe engineering exercise that contained many systems that would find their way into future models. Designated C112, this sober design represented the next step in Mercedes’ technology development using a mid-engined platform. Its numeric predecessor, the fabled Wankel – and for world record attempts turbo diesel – engined C111 program teased us with the prospect of a 400hp, four rotor Wankel gullwing Supercar.

Begun in the late ’60s the exciting C111 project became essentially a dead end when the factory dropped Wankel engine development. However, technology developed and tested on the C112 proved to be more relevant for future road cars and we rely on many of these technical advances today. 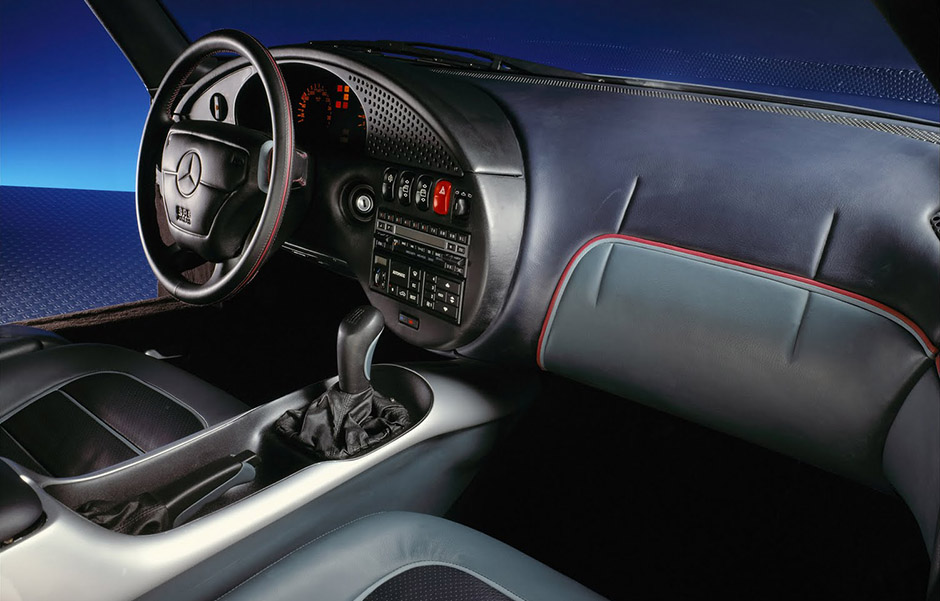 C112 interior hints of a luxury super car. With its mid-engine V12 coupled to a 5-spd transaxle, this Gullwing must be a satisfying drive.

In 1991 active suspension had long been a featured technology in the automobile racing world – particularly F1- and was just beginning to enter the production car realm. Infiniti’s 1990 Q45 sedan was an early “active” production car. Each wheel of the C112 is equipped with a combination of spring and hydraulic servo cylinder. Sensors detect all vehicle motions; vertical displacement, roll and pitch and computers evaluate the data and control the active suspension elements accordingly. The result was a high level of stable roadholding. This technology was the basis for what would become Mercedes’ ADS (Adaptive Damping Suspension) initially found on Mercedes’ V-12 cars introduced in 1993. 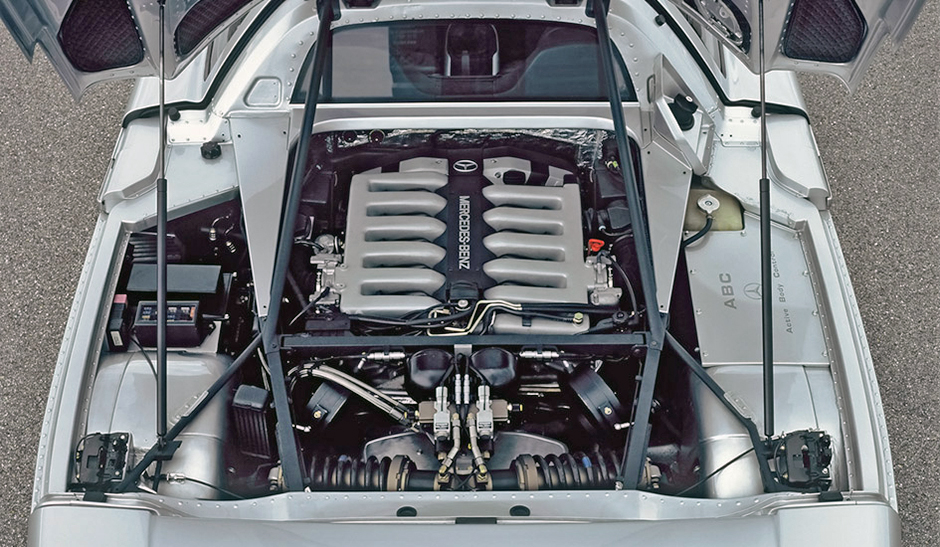 Raising the C112’s massive engine cover reveals the 6.0 liter V-12. Keep in mind this car was conceived a few years before we saw first production V12 that arrived in the 1993 SL600. Note the active suspension hydraulics plumbed to the coil over shock assemblies and the finishing cover announcing ABC – Active Body Control. Extensive new technology being featured here in 1991.

Anyone peering under the enormous clamshell rear deck of the C112 in 1991 would have been struck by the prominent cast aluminum intake manifold incorporating 12 intake runners: A V-12. It’s worth noting that Mercedes’ most potent production engine at the time was the 5.0 liter, 4 valve per cylinder V-8 producing a paltry 322hp and 332 ft/lbs of torque. This exotic new 6.0 liter V-12 produced 408hp and massive torque in a silent, linear manner. In a scant 2 years, the Silver Star’s most discriminate and wealthy buyers could purchase this silky smooth powerplant in either an SL or an SEL. The C112 undoubtedly contributed to this range of engines.

One bit of technology not making the production cars was the active rear steering system. The ESP (Electronic Stability Program) certainly did, however and has helped thousands of over enthusiastic Mercedes drivers avoid slipping their cars off the road and into the bushes. All thanks to the C112’s hard work at the Mercedes-Benz test facilities. 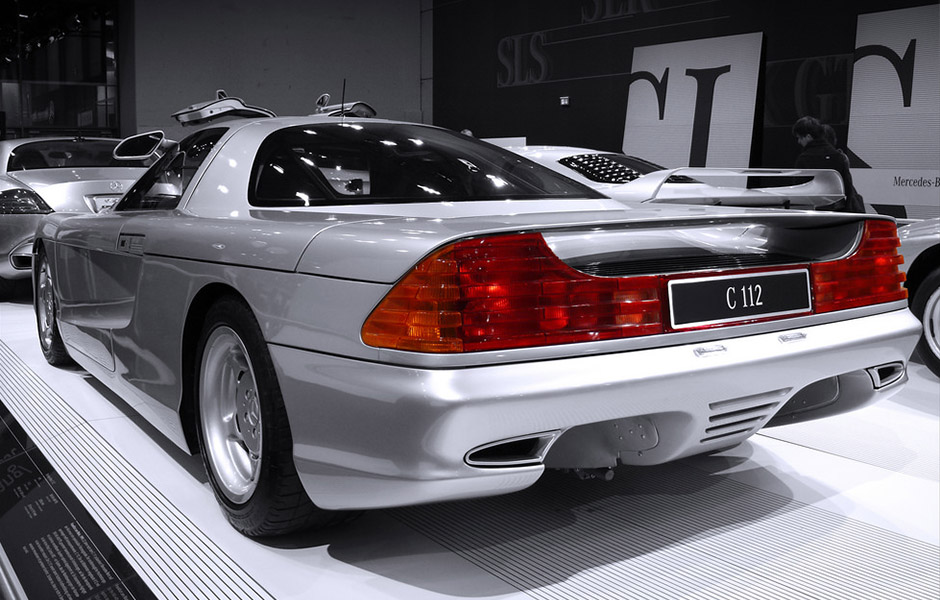 The C112’s sober and clean shape eschewed the ‘tack-on’ styling gimmicks so often found on future – and current – generations of Supercars. Front spoiler was automatically adjustable in concert with rear spoiler depending on the C112’s speed. Mirror placement is similar to the Sauber C11 Sports Prototypes of the era. And note the ‘tunnels underneath the tail of the car to assist airflow from underneath the car. 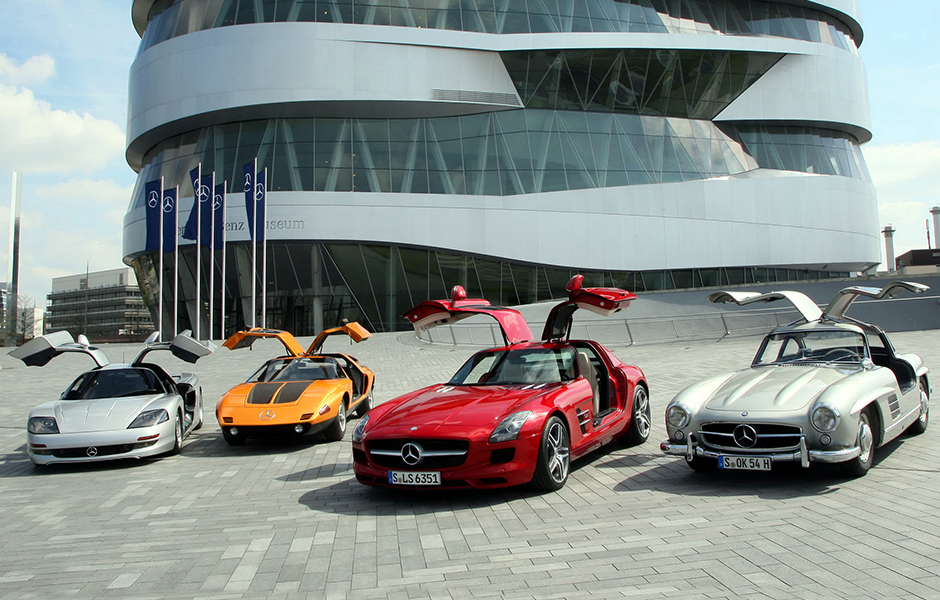 The C112 joins its brothers past and future in front of the Mercedes-Benz Museum.