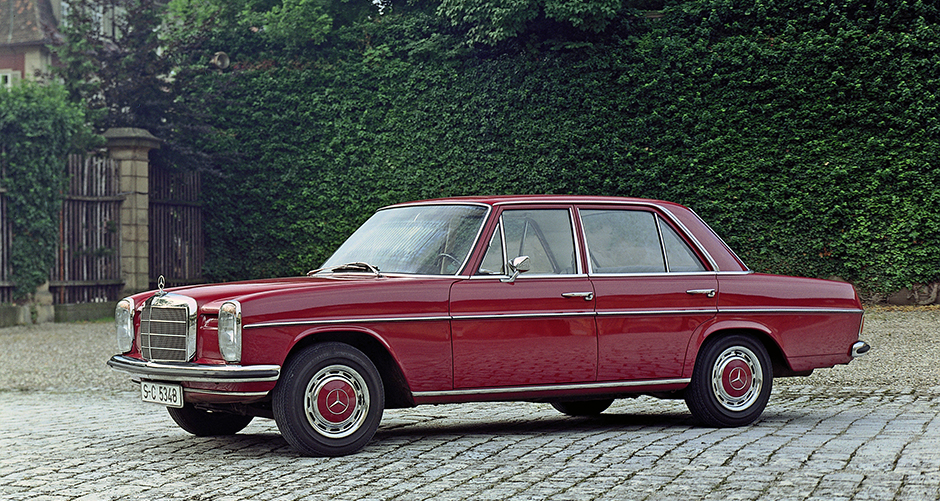 Early 200 sedan in 516 Red. Supremely practical, roomy and economical, the long running 114/115 series Mercedes was wildly popular…and rather dull. We have to admit that it is a very clean and crisp design.

How about a slight, well…large departure from the usual focus on gullwings, 280SLs, 6.3s, the new SLS and such? The perfect counterpoint to the poster children of Mercedes-Benz’ glorious heritage has to be the “stroke 8,” so named for its introductory year of 1968 (although 67 units were constructed in 1967).

Stay with me here. The range began with the sober 200, a 95hp gasoline 4 cylinder sedan. This 2805 lb four door initiated a series of cars fitted with a wide variety of engine/transmission combinations which culminated nine years later when the final 1976 240D 3.0 (known in the US as the 300D) left the assembly line. A Mercedes-Benz for the masses, 114s and 115s were safe, reliable transportation for conservative motorists around the globe. “Exciting” was not an adjective generally connected to the “Stroke 8.” Dull, utilitarian, sober and practical were more to the point.

Is a 1975 240D collectible? Generally not. But this spectacularly preserved 73k mile example certainly is. It’s a matter of finding such an example among the hordes of deteriorated Stroke 8s. It’s an extremely rare find and an enjoyable cruiser.

To the Daimler-Benz board of directors, however, the Stroke 8 was the most successful range of cars the company had yet produced. Performing duties as taxis, ambulances, pickups and everyday transportation, the range found 1,919,066 buyers! This was indeed a very exciting car for Mercedes-Benz’ profitability over the 8 year production run. 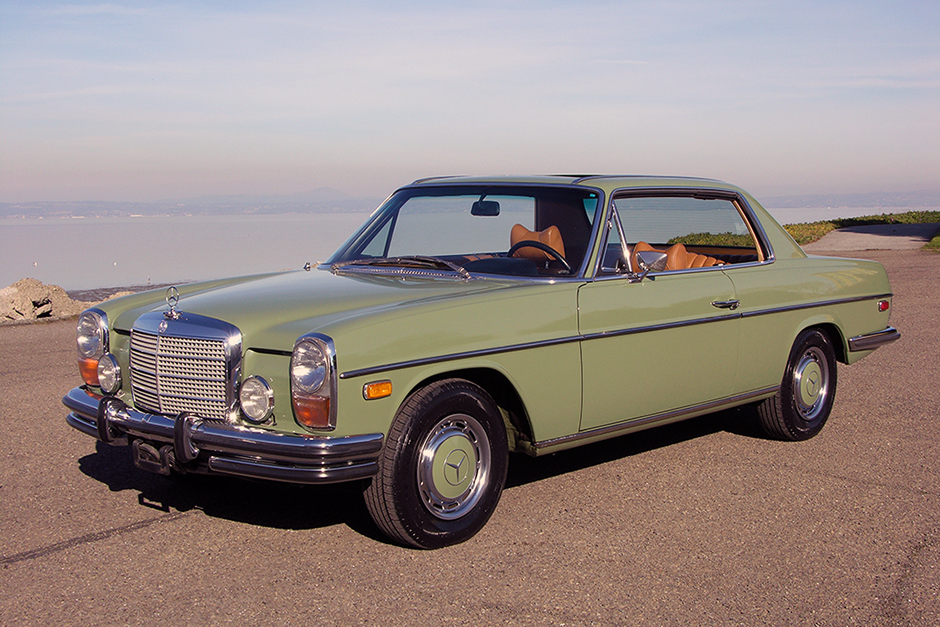 The 114 coupes will be the most collectible but finding a good one is the challenge. Production numbers were far lower than the sedans. This ‘high grille’ 1973 280C glows in the California sun. Was fitted with superb tan leather and center console shift selector.

My philosophy is that any extremely well preserved original pre-1974 Stroke 8 is collectible. The caveat here is “extremely well preserved.” Here’s what I mean. A severely weathered, non-running or hobbling 280SL or 280SE 3.5 coupe or 220 ponton cabriolet is collectible because they have an intrinsic design appeal, dynamic performance capabilities and an enduring cultural identity. Most importantly, these and many other established Mercedes-Benz classics have adequate end value to justify restoration costs. Enthusiasts will step into the market and purchase such cars and return them to the road.

This is not the case with the 114/115 series, nor most fintails, ponton sedans and 108s for that matter. A heavily neglected Stoke 8 will not find a buyer as prices do not support any significant refurbishing – not even for a coupe. However, a highly preserved example is absolutely collectible and surprisingly rare. Highly distressed examples become parts cars and often are simply left to die. I’m certain a spotless original 220D would find an enthusiastic buyer as would any highly preserved example of the range. And of course an immaculate 250C/280C would be the most collectible of the series. 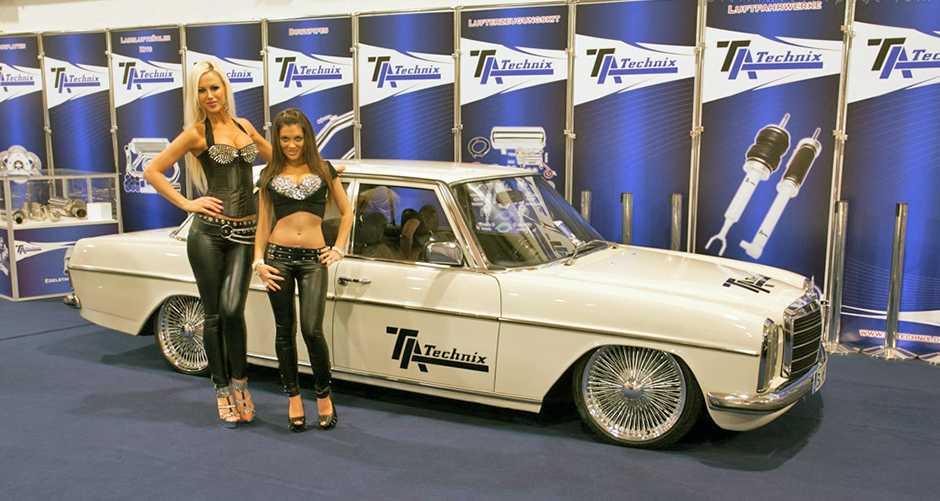 And the tuner community has also discovered the 114/115s. Blinged coupes and sedans with bedazzled female accessories are fairly common today at shows. How about those spoked wheels?

What to look for

Due to the Stroke 8’s generally low values, any significant reconditioning can swamp a car’s full value. Finding an up and running, reasonably presentable example is essential. Remember, we only recommend pre-1974 cars to avoid the crude emissions equipment and the offensive 5 mph bumpers.

Some of the trouble spots follow and most are typical classic Mercedes weaknesses. 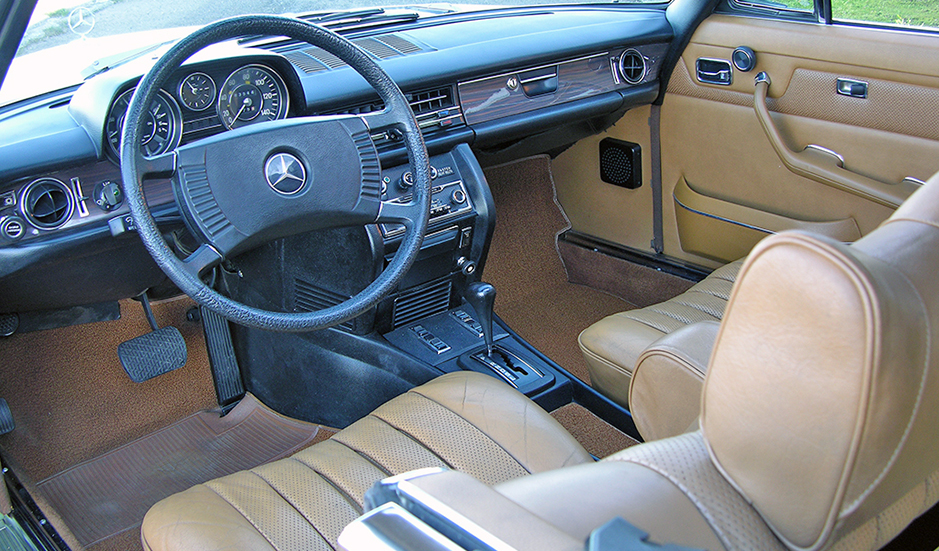 Exceptional ergonomics are part of the /8s appeal. This is the interior of the green 280C above. Leather is particularly rare. Note the floor shift automatic. They are comfortable touring cars.

What about the driving experience? After using my 1973 280C regularly and spending the entire August Monterey week in the car, I can say the car is absolutely suitable for regular, comfortable use. With an enormous trunk, spacious interior environment and compact design, a sorted Stroke 8 rewards its driver with relaxed comfortable touring. My only complaints would be the slightly over-assisted power steering, typically soft suspension settings and…and…that’s about it! Visibilty is excellent and parking is a cinch.

Is this a respectable Mercedes classic? During my auction inspections in Monterey I parked my dark olive green 280C in downtown Monterey in front of a grigio metallic (Anthracite) Ferrari 360 Modena (one of the hordes of 360s that engulf Monterey each year). I popped in to a cafe for a mocha and watched as people walked by the cars. 80% of the passersby ignored the 360 and paused at the cool Stroke 8 coupe for a better look. Enough said.

One thought on “Making a case for the ‘Stroke 8’”