Stroke 8 coupe 50th anniversary. In November 1968, Mercedes-Benz unveiled the 114 model series coupes. In addition to the 250 C with the then most powerful saloon engine, the 250 CE is also available, whose six-cylinder injection engine is reserved for the coupes.

The two-door long-distance vehicles round off the top end of the “Stroke Eight” model range. Today, the coupes are among the sought-after classics on offer from ALL TIME STARS, the Mercedes-Benz Classic dealer. The premiere 50 years ago marked the starting point of the history of coupes in the upper mid-range series by Mercedes-Benz.

Mercedes-Benz set a benchmark for elegance 50 years ago, right in the middle of the 1968 revolution: in January 1968, the “Stroke Eight” saloons of the 115 and 114 model series set new stylistic and technical standards. Now, the coupes of the 114 model series round off the top end of the model range of this first independent upper mid-range series by Mercedes-Benz and establish the tradition of today’s Mercedes-Benz E-Class coupes. The third “Stroke Eight” body variant to follow in December 1968 were the saloons with a long wheelbase and, later on, chassis for special-purpose bodies.

The contract for the development of the elegant two-door model based on the saloons was awarded on 11 December 1964.

Instant success for the new range

The experts are impressed by the two-door long-distance vehicle with its high-quality interior equipment, including carpeting and elegant wood veneer on the dashboard. Trade magazine “auto motor und sport” writes: “The coupe also provides the level of comfort missing from the saloon. A touch of luxury is offered in a functional package at an acceptable price.”

Technically, the coupe closely resembles the saloon. Its design, however, clearly sets the sporty-elegant touring car apart from the four-door model: the front and rear windows are flatter than those of the saloon and, together with the roofline, which is 45 millimetres lower, create a dynamic silhouette. There are also frameless and fully retractable side windows at the front and rear. Removing the B-pillar creates generous, open areas. The overall style is harmoniously rounded off by the bumper, which extends up to the rear wheel section.

By the end of production in August 1976, Mercedes-Benz had built a total of more than 67,000 “Stroke Eight” coupés of the 114 model series. The most successful model, with 21,787 units, is the 250 CE. The top-of-the-line model ─ the 280 CE ─ is built 11,518 times. Some 60 percent of the coupes are exported. Today, the coupes are among the most sought-after classics on offer from ALL TIME STARS, the Mercedes-Benz Classic dealer. 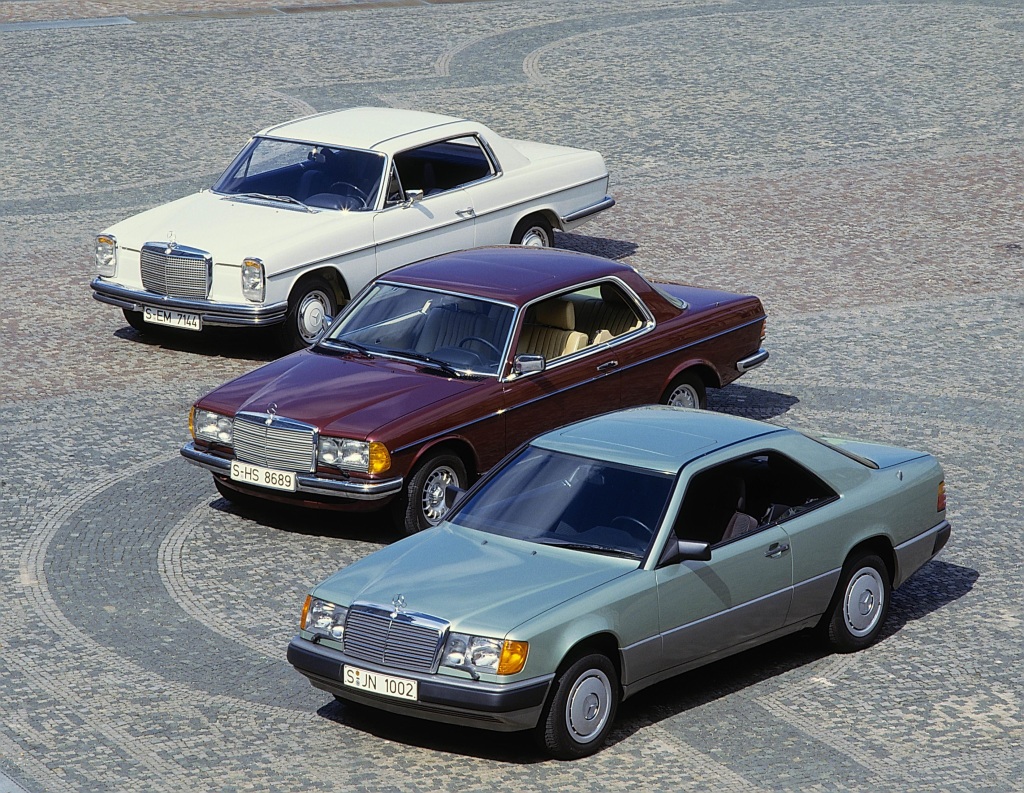 In 1968, Mercedes-Benz not only established the tradition of the E-Class coupes with those of the 114 model series, but also advanced the differentiation of the model range. After World War II, the Stuttgart-based brand initially opts to use standard bodies for passenger cars of the 180 (W 120) to 220 SE (W 128) model series.

This means that many identical pressed parts can be shared, including windscreen frames, front doors and trunk ─ the basis for efficient production. The possibility of utilizing streamlined body construction techniques is applied to an even greater extent in the 110 and 111/112 model series, whereby the vehicle bodies resemble each other from the windscreen all the way back to the boot.

In 1960, Prof. Dr. Fritz Nallinger, head of development, proposed subdividing the passenger car model series into two areas. This is how the “Stroke Eight” model series family was created, named after the abbreviation “/8” for the year, it was unveiled as an independent, upper mid-range series (1968). The four-cylinder models are grouped as the 115 model series, whereas the six-cylinder variants form the 114 series and also lay the groundwork for a coupe. The contract for the development of the elegant two-door model based on the saloons was awarded on 11 December 1964. As early as 3 September 1965, Nallinger presented two coupe designs to the management board. 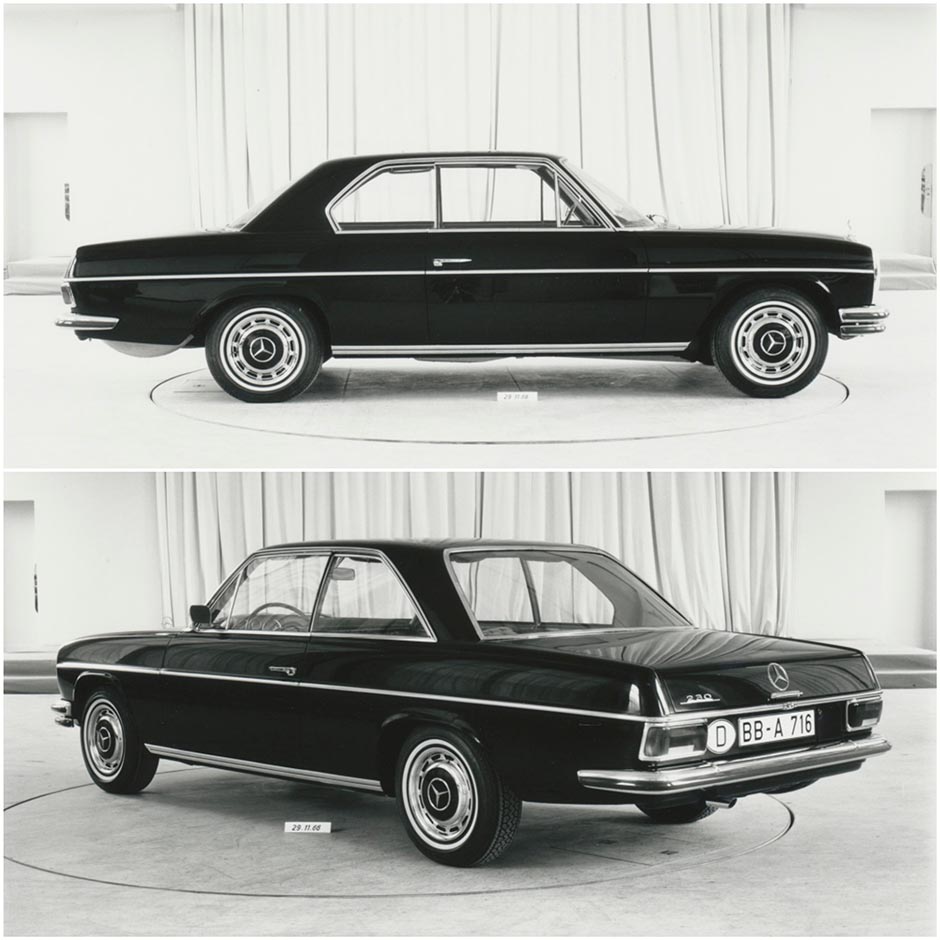 The fact that the “Stroke Eight” coupe, launched in November 1968, is positioned at the top of the family makes the choice of engines clear: from the saloons, Mercedes-Benz uses only the six-cylinder carburettor engine borrowed from the top 250 (96 kW/130 hp). The variant of the M 114 engine with Bosch D-Jetronic electronic fuel injection in the 250 CE (110 kW/150 hp) is reserved for the coupes. This more powerful variant quickly becomes the star of the new coupes.

“Motor-Rundschau” as well as “auto motor und sport” measure a top speed of 198 km/h for the 250 CE, and “Automobil Revue” in Berne even measures 199 km/h. The car thus almost reached the magical mark of 200 km/h, which was still outstanding for passenger cars at the time. It goes without saying that Mercedes-Benz chose the Hockenheimring race track to present its coupés 50 years ago.

In 1973, Mercedes-Benz introduces the facelifted coupes of the upper mid-range series. The Stuttgart-based brand retains the 250 C, 280 C and 280 CE engines. All the more extensive are the other changes, some of which are borrowed from the SL and SLC sports cars. Here, the focus is on safety, which translates into movable outside mirrors that can be adjusted from the inside, dirt-repellent trim on the A-pillars and dirt-resistant tail lamps.

As early as 1973, the coupes of the 114 model series are fitted with the four-spoke safety steering wheel from the S-Class, head restraints and automatic safety belts for the front seats as standard equipment. The simultaneously revised design includes elements of the S-Class 116 model series introduced in 1972, such as a low and wide radiator grille and a redesigned front apron. 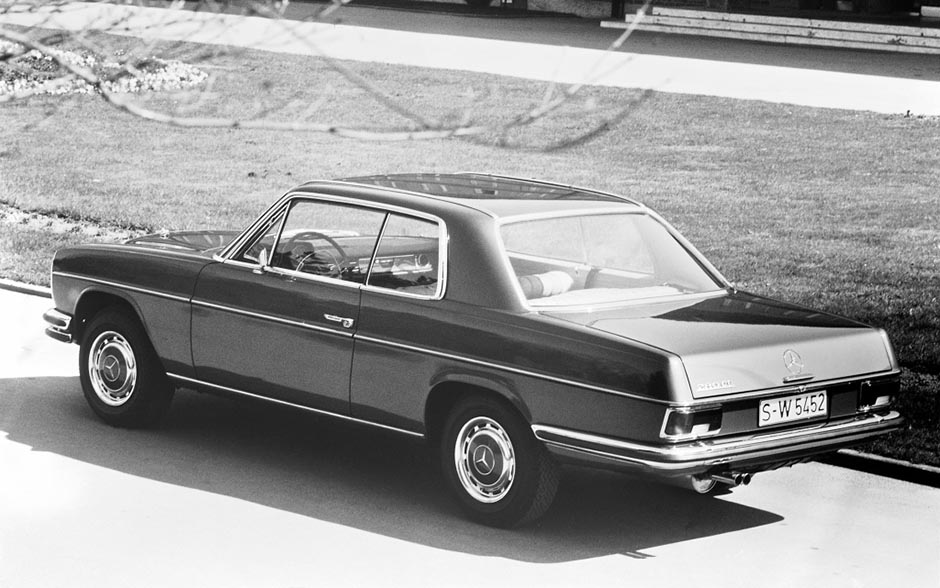 The introduction of the 250 C and 250 CE models in late autumn 1968 marked the beginning of a success story that continues up to this day. The current E-Class coupé of the C 238 model series advances this excellent history by impressing with its wide range of models and regularly enjoying top sales numbers when it comes to new sports car registrations in Germany. 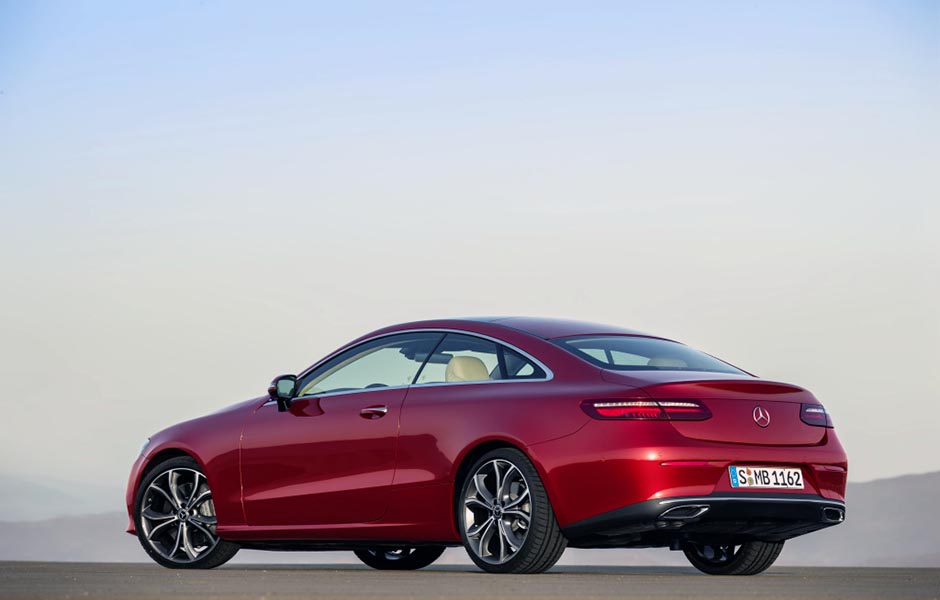