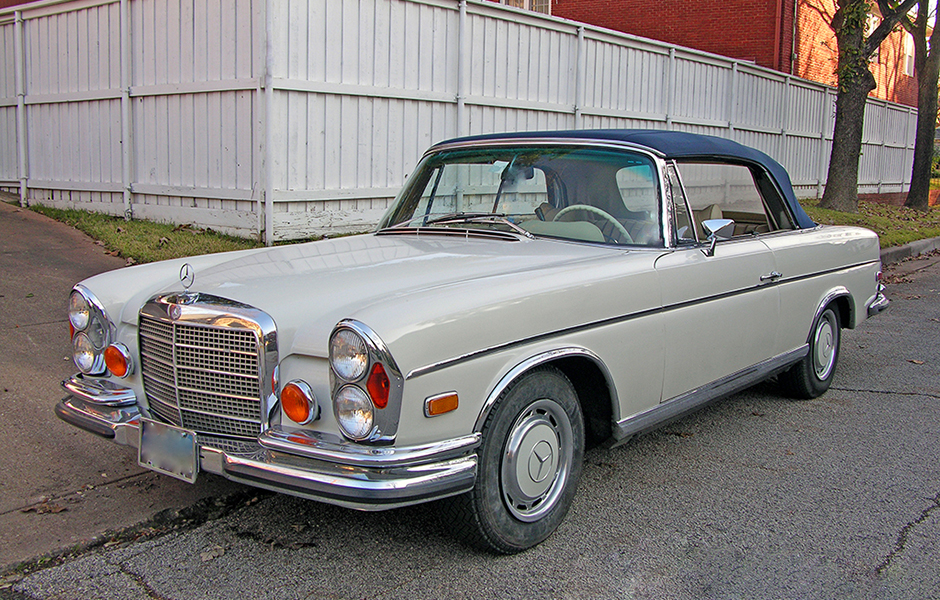 Last month’s Failure of a Mission article was so well received that I thought I would follow it up with an article covering a successful buying adventure. I can’t buy everything I’m offered but the following purchase was a result of some good luck and of staying in business for 29 years. While not quite the caliber of the Gullwing last month, this lead was an exciting call nevertheless.

The phone call came in late October from a gentleman in Dallas offering a car that I consider the most desirable post war Mercedes-Benz classic, a 1971 280SE 3.5 cabriolet. In fact, I missed the call AND the message for the better part of a week which, in today’s competitive market to buy such a special car, generally means the car goes to another buyer who moves immediately. I’m not the only game in town relative to buying classic MBs and as such I didn’t have much hope for a return call.

After we shook hands on the deal I asked him how he found me. Evidently I had helped him with market valuations for 3.5 Cabriolets…17 years ago.

Why did the end-of-series V8 111 coupes and cabriolets rise in value so dramatically from 2010 forward? My sense, and one shared broadly by MB collectors, is that these cars possess the exact ingredients required to justify the financial appreciation and buyer adulation they have experienced. These ingredients include: highest build quality of MB’s post war classic era, (relatively) low production numbers (1232 for the cabriolet), modern over-the-road dynamics, undisputed elegance, supremely well balanced design, potential four passenger touring capabilities and…well, that sums the 3.5’s appeal fairly well.

There comes a time in any intrinsically interesting automobile’s life when a larger audience recognizes the qualities that set it apart from its contemporaries. The 3.5 cabriolet has experienced more than a few five year cycles where values essentially doubled. And deservedly so.

I’ve had a fully restored Silver/Black 3.5 cabriolet sitting under a cover in my warehouse for 8 years. I purchased the car for a client for $175k in 2011, a price we spent quite some time debating as it was absolutely the ceiling of the market at that time, perhaps slightly over market. My client’s priority was to own one of these gorgeous cars, not necessarily what it would be worth in the future.

He visited his 3.5 no more than 5 times for weekend jaunts during its time with me. In early 2015, well into the first 5 year cycle of his ownership, the car had doubled in value, almost to the dollar. While other benchmark European sports/touring cars of the same era, including early Porsche 911s and pre-Fiat front engine V12 Ferraris as well as 300SL gullwings/roadsters rose dramatically during the same period, few had value increases approaching 100%. The market had indeed awakened to these extraordinary cars.

He decided to sell the car recently just over 4 years into his second 5 year ownership cycle, a period in which the car depreciated approximately 20%. His 3.5 replacement? A Ferrari 365 GTB4 ‘Daytona’ coupe, a car that arguably has declined significantly more than 20% since winter 2015. He will soon have 375 HP (it’s a seriously massaged Daytona) rather than 220 HP residing under his right foot. 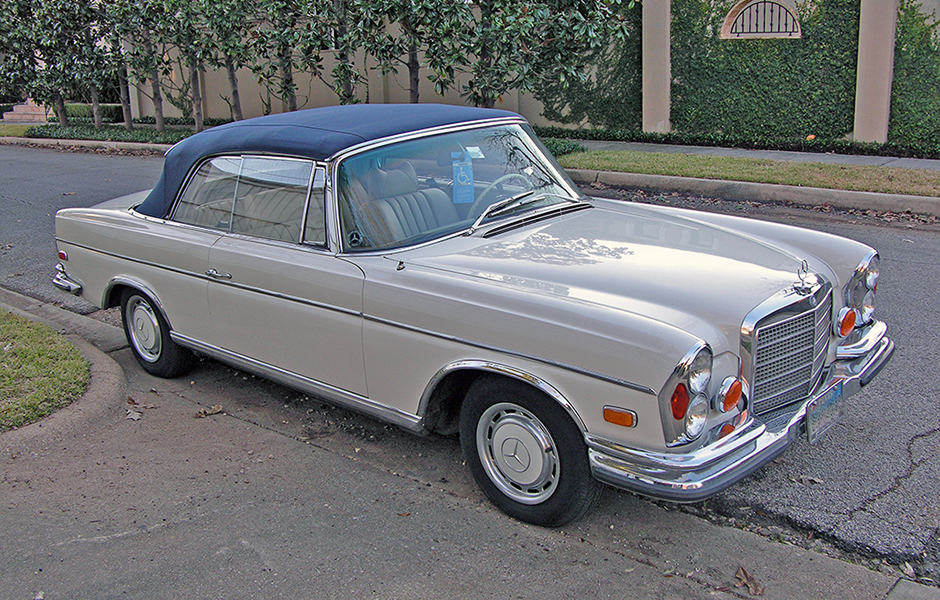 Elegant regardless of color, the 3.5’s sublime design impresses even when clothed in pastel white. Full length beltline side molding was standard on the air suspension big six cylinder 300SEs and gracefully reduces the sense of mass in the side view. Chrome wheel arch moldings were an extra cost option. The small V8 offered 220 HP and a top speed of 125 MPH.

After almost a month with no return call from the Dallas 3.5 owner, I was shocked and absolutely relieved to receive a call back. After confirming that the ID number indicated an original 3.5 cabriolet and not a coupe sans hard top, I immediately made arrangements to visit the car. Checking the ID number prefix on any 111 convertible is essential. Open cars will have an odd number type designation such as 111027 for a 3.5 cabriolet.

As the garage door slid back at his comfortable home in the Dallas suburbs, I saw a pleasantly weathered European model cabriolet finished in 131 pastel white with creme leather and blue carpets/soft top resting inside. And the car had been fitted with the full length chrome sweep spear side moldings usually found on 112 (300SE) cabriolets. He had owned the car for 47 years and so I was looking at an essentially single owner 3.5 cabrio. Typical for Euro models, the car did not have AC when delivered from the factory although power windows front and rear were ordered as was burlwood and an ivory steering wheel.

Crucially, the car was structurally exceptional with undisturbed front fender bolts, door hinge bolts and deck lid hinge bolts. So, panel fit and door/hood/deck lid gaps were factory correct. It had certainly been painted but thankfully not disassembled, a rarity today. Structurally it was a ‘survivor’.  And the odometer showed but 63k miles.

The sense of relief and excitement upon arriving at a car and finding it to be undeniably interesting is what drives me forward. And it makes up for the inevitable occasional disaster. This was a compelling cabriolet that ran and drove acceptably well and one that could be finessed cosmetically, and technically updated to become a (comparatively) inexpensive driver quality example. It needed to be bought.

I’d had a discussion regarding price with the seller before making the trip to Dallas so we were generally on the same page. After an easy chat about pricing I owned this cool cabriolet. After we shook hands on the deal I asked him how he found me. Evidently I had helped him with market valuations for 3.5 Cabriolets…17 years ago. He saved my number and copies of my emails in the car’s file. Amazing.

With the handbook packet in hand, we parted ways and I headed back to the hotel to get prepared for my flight to McAllen, TX to have a look at a motley group of 9 cars the next day. This 3.5 is being freshened up in Europe at the moment and will soon be ready for Continental touring. Mission accomplished.

The McAllen adventure will be coming your way soon.