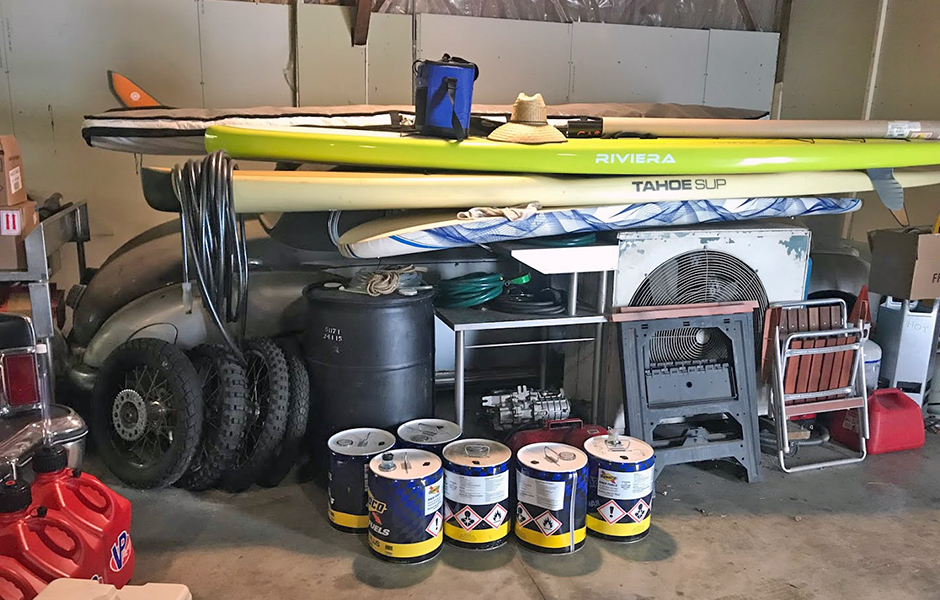 If you were a premium European automobile manufacturer trying to gain a secure a foothold in the vast US market in the mid ’50s, the options were to go it alone and open dedicated franchises across the US or to partner with an existing manufacturer with an established dealer network. The manufacturer in this case was Mercedes-Benz and they decided on the latter plan, forming an unlikely alliance with the Studebaker-Packard corporation.

Odd as it sounds today, Mercedes was having a difficult time signing dealers in the US at that time: a franchise required a $10,000 commitment to buy parts, tools and signage and MB would provide flooring to stock 2-4 cars.

By the early ’60s, however, Mercedes-Benz no longer wanted to be tied to the failing Studebaker Corporation and wanted out of the agreement, having achieved their goal of establishing their brand in the US.

There were not many takers to handle MB’s utilitarian (300SL gullwing and 300s excepted), expensive and 95% manual gearbox model lineup in 1957. Oh, what hindsight tells us now. I can’t help but think of my Father’s fatal business mistake of turning down a Volkswagen franchise in 1969 after loosing his Buick franchise. Taking on a Mercedes-Benz franchise in the middle ’50s was also a serious leap of faith, despite the presence of the 300SL in the model lineup. 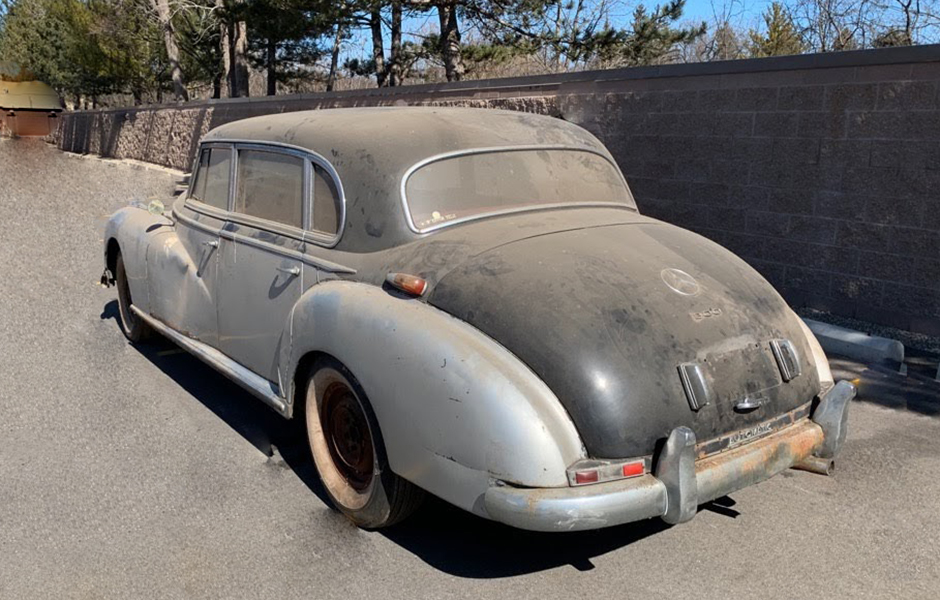 Seeing the light of day after decades of hibernation. The ex-Hurley 300c’s 100mm of length via extended rear doors slims the original 186’s slightly bloated side profile. It is one of only 62 extended models and quite likely the only one fitted with fuel injection.

One and only fuel injected, long wheelbase 300c?

Evidently Mr. Hurley became adequately enamored with the Mercedes-Benz marque to order a very special ‘Adenauer’, a 1957 300c. Befitting this titan of the automobile (and aircraft) industry, the W186 300c that Mercedes assembled on May 10, 1957 featured fuel injection – the fuel injected W189 300d would not appear until late 1957 – and was stretched 100 mm beyond the 5065 mm of the standard car.

The data card firmly establishes this extraordinary build. In addition to noting the car’s general specifications – ‘schwarz’ (040 black) paintwork and 1088 leder rot (red leather) piped in 826 creme interior and a Becker Mexico radio with power antenna –  it clearly notes ‘einspritzmotor and ‘100mm langer’: fuel injected motor and 100mm longer wheelbase. And tellingly, factory documents note ‘Herr Generaldirektor Hurley’ as the individual who placed the order. Of the 1,472 300c sedans constructed, evidently Mercedes built 62 LWB versions, something I was never aware of. Mr. Hurley’s was likely the only one fitted with an ‘einspritzmotor’.

It was a proper limousine and one that allowed Mr. Hurley to comfortably read about his company’s declining fortunes in the Detroit News from the 300c’s spacious rear cabin while being whisked to his office in South Bend, IN. And the 35 extra HP didn’t hurt either. 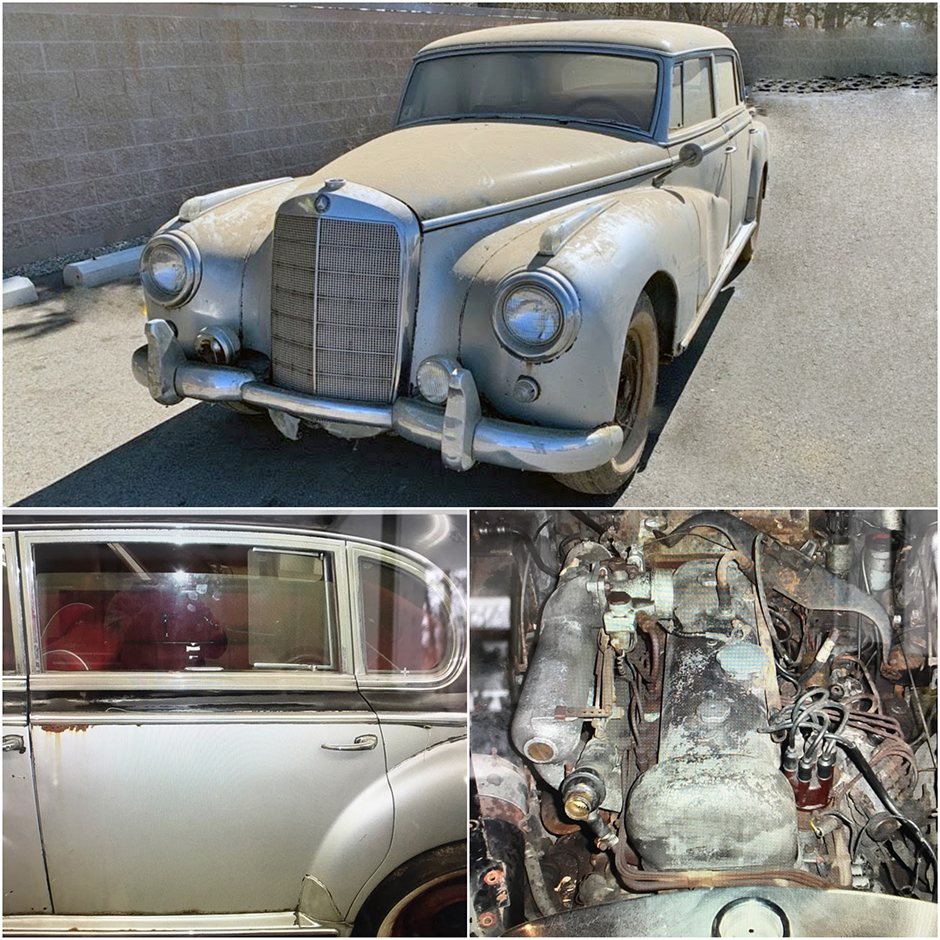 Aesthetics up front are standard 300c. Lifting the hood reveals quite a surprise: fuel injection provided a useful 35 additional HP. Extra length becomes apparent looking side on at the rear doors.

Hidden but not lost

Hurley (probably) retained ownership of his special Adenauer in New Jersey until the late ’60s, well beyond the extinction of both Studebaker and Packard. Packard went first: my grandfather had some good ideas to reverse Packard’s decline when he was elected executive vice president in 1952, but was eased out of a possible presidency by the tough James Nance who presided over the merger with the moribund Studebaker in 1954. Packard, as an independent automobile manufacturer, officially died on June 25, 1956 but the name was resurrected and attached to crudely modified Studebakers beginning in July 1956.

By the early ’60s, however, Mercedes-Benz no longer wanted to be tied to the failing Studebaker Corporation and wanted out of the agreement, having achieved their goal of establishing their brand in the US. For a sum reported to be close to $9m, Mercedes terminated the agreement well short of the original 14 year term and set up Mercedes-Benz North America. Studebaker officially died in 1964.

This special 300c changed hands a few more times after Hurley’s death in 1971 and spent time in Wisconsin during the mid ’90s and most recently in Michigan. As was/is the fate of so many Adenauers, the car was allowed to deteriorate substantially over the ensuing decades but thankfully has been rescued by a dedicated MB enthusiast who had been following it for some time. 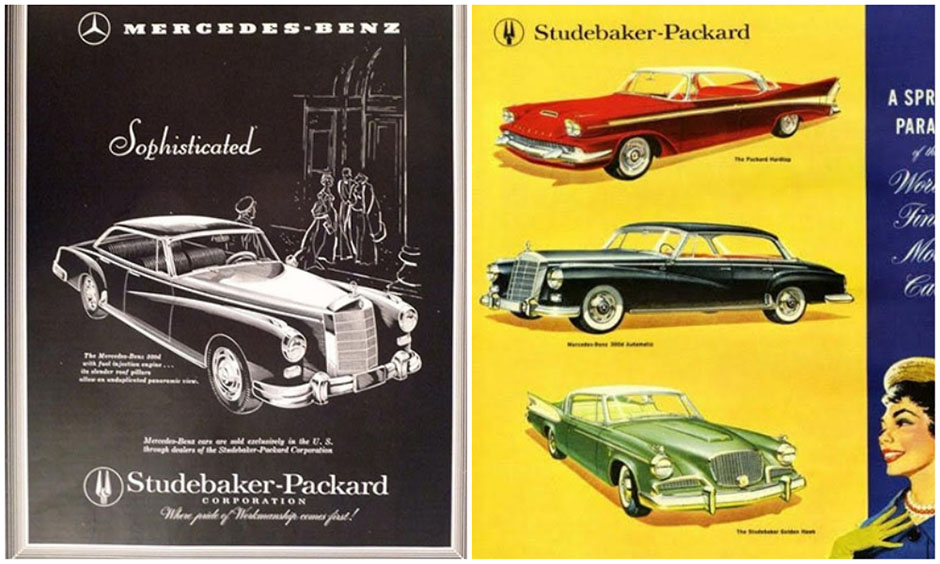 Combined marketing for a very unlikely trio: Studebaker/Packard/Mercedes – Benz. Only one survived. Typical of renderings of the era, the ‘Sophisticated’ 300d looks more like a restomod creation from the brilliant builder Steve Moal. Mercedes could only wish their end-of-series Adenauer looked so lean and sleek.