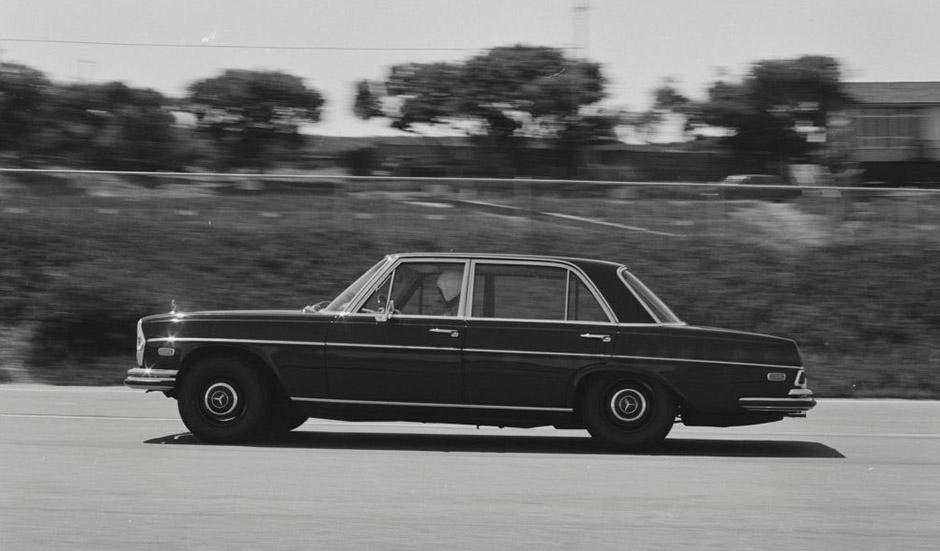 Legend has it that sometime in 1966 Mercedes engineer, Erich Waxenberger, hatched a plan whereby he would install the 300hp (SAE) 6. 3 liter engine, at that time used exclusively for the 600 “Grand” Mercedes, into a 300SEL 109 chassis air suspension sedan. Introduced in late 1965, the 300SEL was an opulent, long wheelbase variant of the new 108 chassis but fitted with the aging 180hp M189 series single cam inline six-cylinder.

With no formal approval from the passenger car planning brass – notably Rudi Uhlenhaut – Waxenberger completed the first test hack largely on his own time working after hours at the factory. Fitted with a lower final drive ratio (2.85!), larger wheels/tires and upgraded brakes, his creation was predictably a stormer. The legend continues with Waxenberger casually tossing the keys to his secret project to Uhlenhaut, suggesting an innocent test drive. Uhlenhaut didn’t get far before pulling off the Autobahn to lift the hood and determine the source of the car’s endless wall of torque, 434 ft/lb @ 3,000 rpm to be exact.

Impressed with Waxenberger’s neat installation of the massive M100 powerplant and the car’s subsequent impressive road manners, the performance oriented Uhlenhaut – he was the driving force behind the all conquering Silver Arrows of the ’30s and ’50s – persuaded the board to produce the car. With sales of the $26,000 Grand 600s understandably low, the board reasoned production of 300SEL 6.3s considerably reduced the amortization costs associated with 6.3 engine (M100) production facilities. Badged 300SEL 6.3, this businessman’s express debuted to the world at the Geneva Motor Show in March 1968. 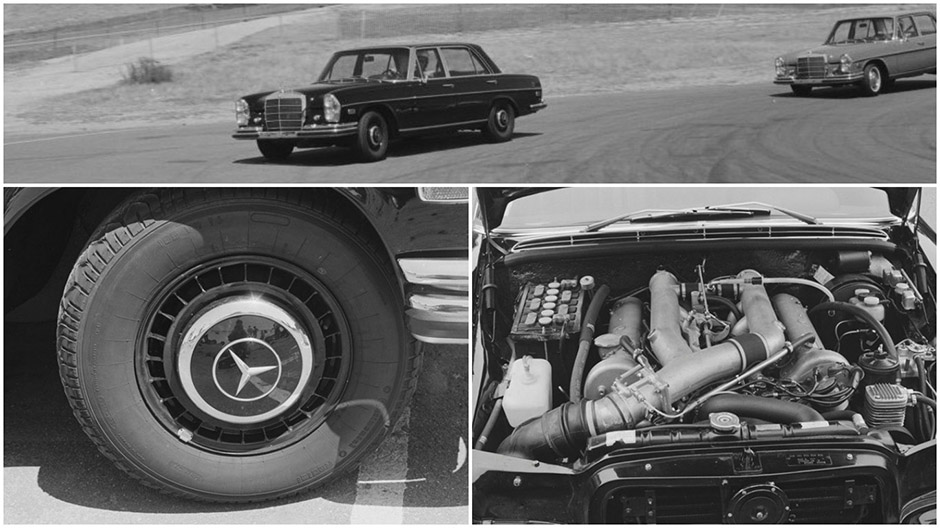 New 6.3 leads a 280SE out of Laguna Seca’s turn 9 during press day laps. Specially cast vented alloys would not make it to production but are evidence that MB was concerned about high brake temperatures. Fuel injected 6.3 liter engine filled the engine bay. Note air suspension compressor at left front of of the bay.

Today (Fall 2012), muscular V-8 mid-sized saloons (sedans) abound from every manufacturer whether it be Pontiac, Audi, BMW, Jaguar or the originators of the theme – Mercedes-Benz. 500 horsepower is now commonplace for this segment of the market but in Europe 1968, the concept of a large output V-8 powered middle sized sedan was novel.

The press release for the June 27, 1968 West Coast debut of this ground-breaking car noted that the entire 1968 model year 6.3 production had already sold out via confirmed orders placed at dealers across the country by eager (and wealthy) clients. Also noted was the fact the new car was “nearly indistinguishable from the normal 300SEL.” Indeed. And so the sleeper “super saloon” was born.

Monterey’s picturesque Laguna Seca Raceway was chosen for the car’s west coast debut and Rudi Uhlenhaut, an extremely competent driver in his own right, delighted – and terrified – the assembled journalists by hurling the new 6.3 around the 1.9 mile course at speeds normally associated with Ferrari GTs than a fully equipped four door sedan. In Uhlenhaut’s the 6.3 could have undoubtedly harried the then new Ferrari 365 GTB “Daytona” around Laguna.

Once 6.3 production ceased in September 1972 (with 6,526 units built), Mercedes-Benz didn’t reprise the concept until the introduction of the Porsche constructed 500E of 1992. The 6.3 stands as a segment defining automobile that is today a rewarding, elegant way to very quickly and discreetly transport yourself over vast distances with minimal fuss (and maximal fuel consumption!). 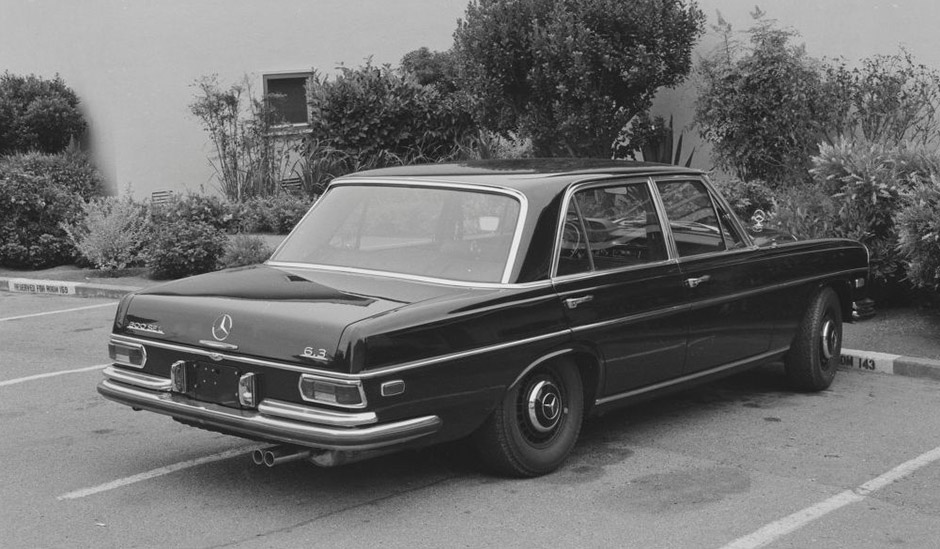 The press car rests in the parking lot of the Del Monte Lodge in Pebble Beach after a hard day at the track. Where is this car today? 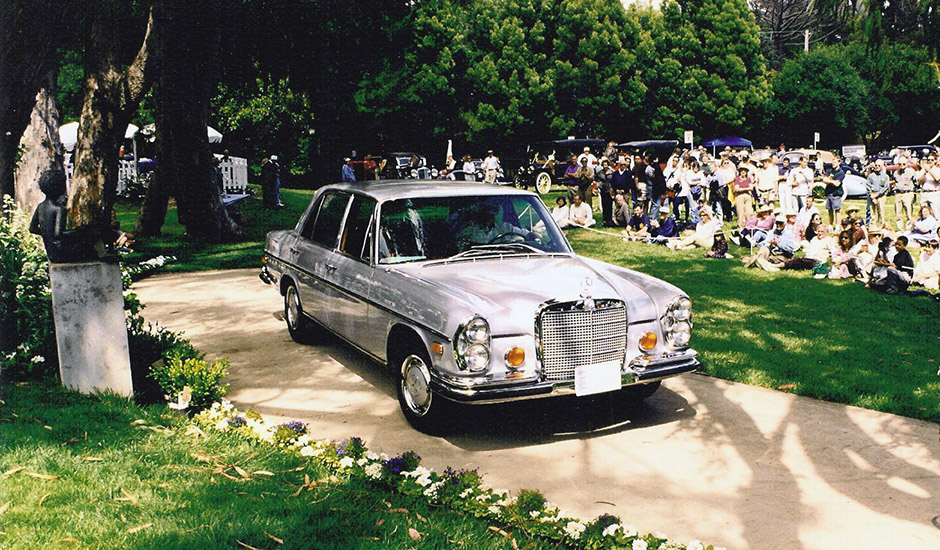 Your author accepting a class win in his fully restored 6.3 at the Hillsborough Concours circa 1998.