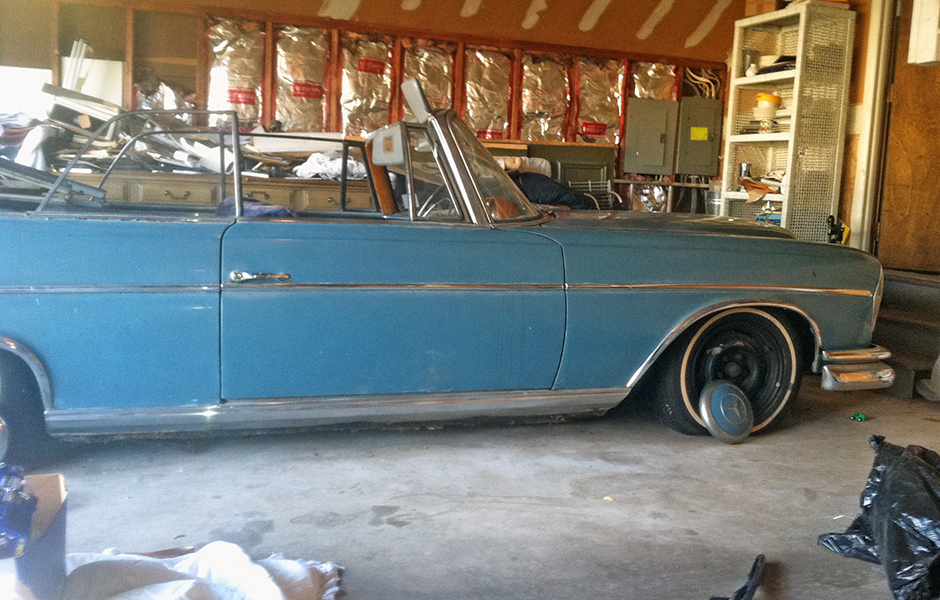 Recent Acquisitions
Cabriolets across the US

Christmas and the New Year presented us with some superb finds from throughout the United States. 111 and 112 series Cabriolets seemed to be coming out of the woodwork over last 30 days or so. Not that I’m complaining. Amongst our recent acquisitions are these four milestone Cabriolets. Each of the cars will be improved – aside from the restored 250SE Cabrio – and all will ultimately find excited new owners. Let’s take a look at this diverse group of one of the most sought after genres of classic Mercedes-Benz. 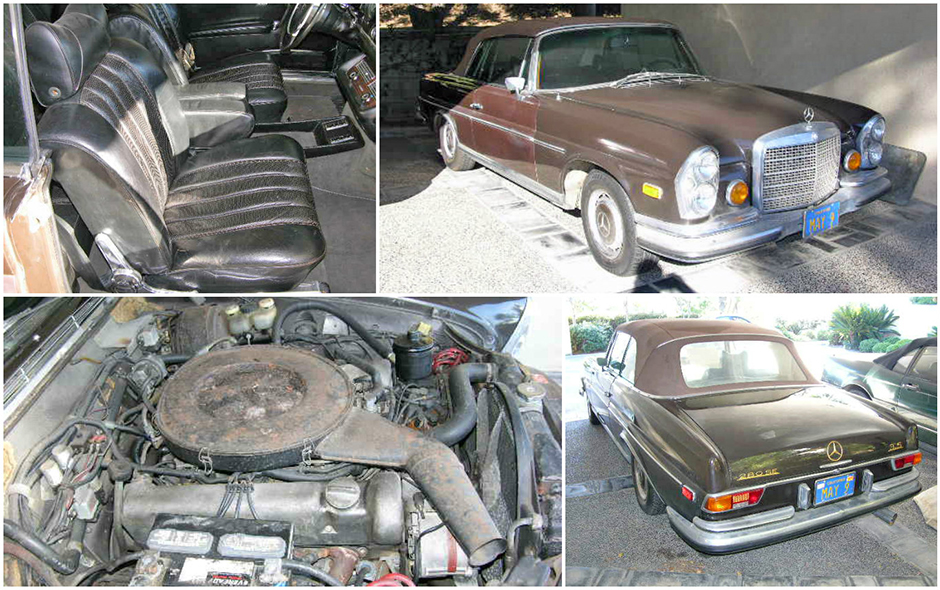 All I was told by this owner was he was interested in selling his beloved 3.5 Cabriolet and that yes, it was rather distressed from having sat for some years unused. I saw only two images, one of the left quarter panel and one of a section of the rodent eaten wiring harness running over the right engine bay inner apron – only 2 images. After the owner mentioned an absurdly low offer made by a local (Los Angeles) vendor, I was on a plane for a look. This V8 Cabriolet was indeed tatty but I was shocked to find one of the most beautifully preserved original 111 interiors I’d ever seen. Amazing. Yes, the front fenders had been replaced but the car was structurally sound with zero rust, a spotless trunk area – filled with a set of ’70s kitsch Zenith wire wheels – and an original hydro-compensator over the rear axle. Here was an intact 3.5 but one most certainly ready for a full cosmetic restoration coupled with a massive technical re-commissioning. I paid the gentleman twice(!) the original offer and headed home. This neglected V8 Cabriolet will eventually return to the road in all its former glory reminding the motoring public of a more refined and opulent era. 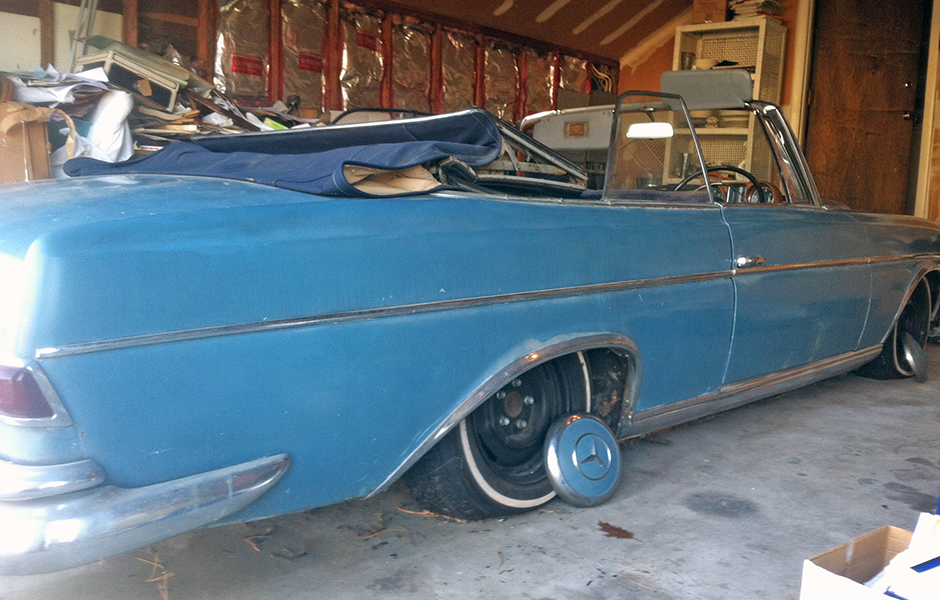 I wrote an article last year called ‘300SE Two-Doors: Worth the Headaches?’ and received a blistering note from a 300SE coupe owner complaining about my bad attitude toward the cars. Granted, I used an image of his car sitting on its belly in the article which did not make him happy. But, the fact remains the 112 air suspension M189 engine equipped 2-doors are…well, problematic. When I received this image from a very sweet woman wishing to clear this 1965 RHD 300SE from her garage, I thought of the fellow with the slumping coupe and poison pen. This is an all too familiar scene with these (112) cars. However, this is one damn rare Cabriolet with its RHD configuration. It was worth buying but not worth a trip for an inspection. Extracting the 334 mid-blue cabrio from its resting place of over 20 years was a puzzle but the delightful owners are quite pleased the car will be returned to the road after what will undoubtedly be a rather extensive restoration. There will likely be surprises underneath once the car goes on a lift but I’ll gladly take the risk in the interest of seeing this exotic “right hooker” back on the road. 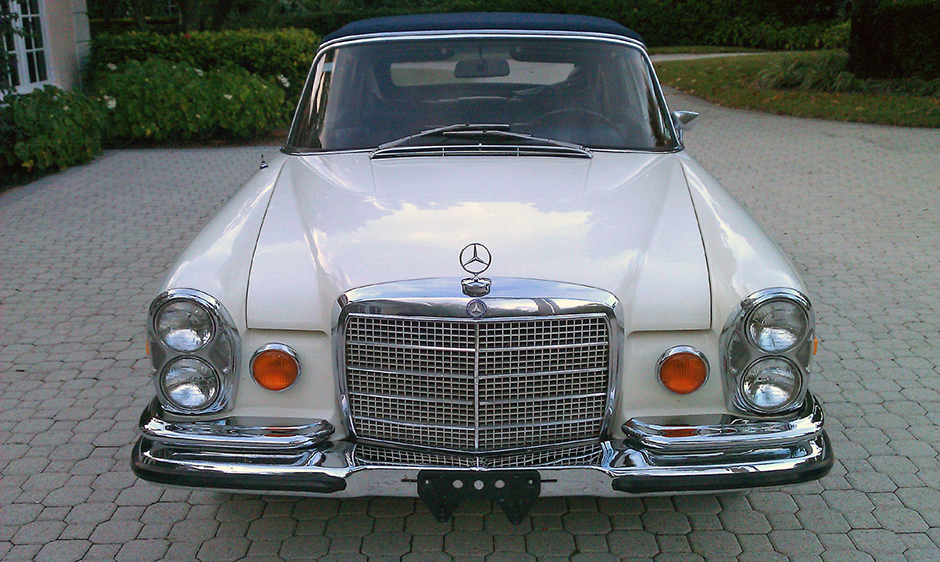 With between 240 and 370 (depending on who you consult) ‘low grille’ 280SE cabriolets constructed, the chances of owning one are relatively slim, particularly with low grille prices escalating in concert with 3.5 prices. This 050 white European model had been languishing at a Florida winter home for some years when the owner contacted us for a quick, no nonsense deal. I didn’t bother to visit this car either but demanded certain highly specific images to get a sense of the car’s structural status. The car needed to be gone by the time he arrived for a Christmas holiday and so it was after a quick deal. It arrived exactly as I had expected – not always the case with my sight unseen deals – and we’re sorting some of the loose ends to end up with an entry level 111 low grille Cabriolet. I’m enjoying some open air (and recently very cold) touring in an iconic open Mercedes-Benz. Did I mention it is fitted with a 4-spd manual gearbox? What an interesting car. 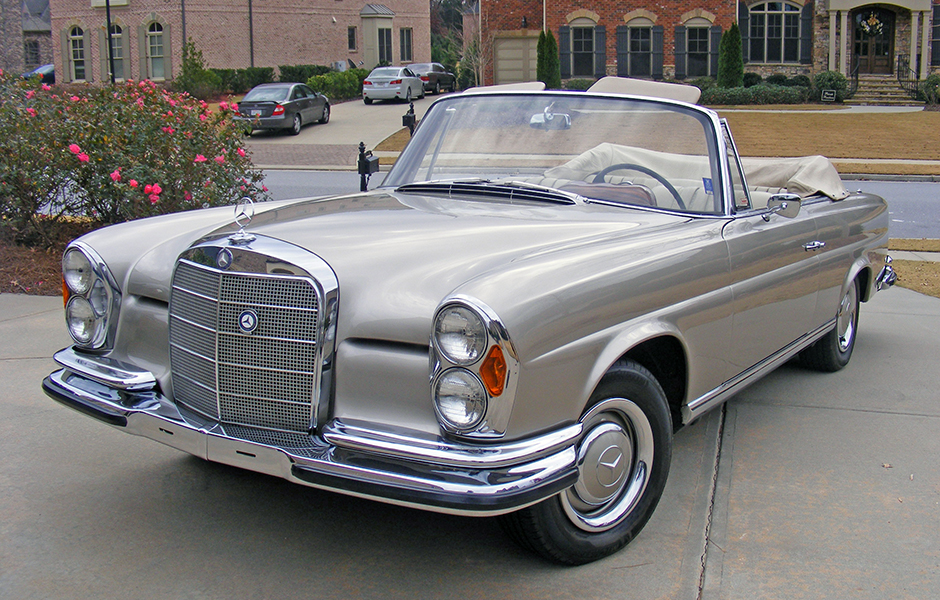 How many times have you heard a car described as ‘restored’ and rolled your eyes as you took a closer look. ‘Restored’ is a rather overused term. The cool owner of this mind-boggling 250SE also described his car as fully restored to which I replied, “show me.” And he most certainly did. Seems an eccentric fellow purchased this car in the late ’80s as a tired but complete restoration project and sent it to the Netherlands for a nut and bolt restoration – and I mean “nut and bolt.” Thankfully, comprehensive images of the work were passed on as part of the car’s historical record and reveal the extent of work. This cabriolet was stripped to an absolutely bare shell and every item subsequently reinstalled on the car was renewed or restored, every item! All this work required $110k in restoration costs…in the late ’80s. Extraordinary. We’re warming up to the non-period 702 smoke silver paint- this 250 was originally 040 black – and will have nothing to do once it arrives other than fill it with fuel and head down the coast toward Big Sur. The seller now has ample funds to sort out his recently acquired 220SE Ponton Cabriolet.