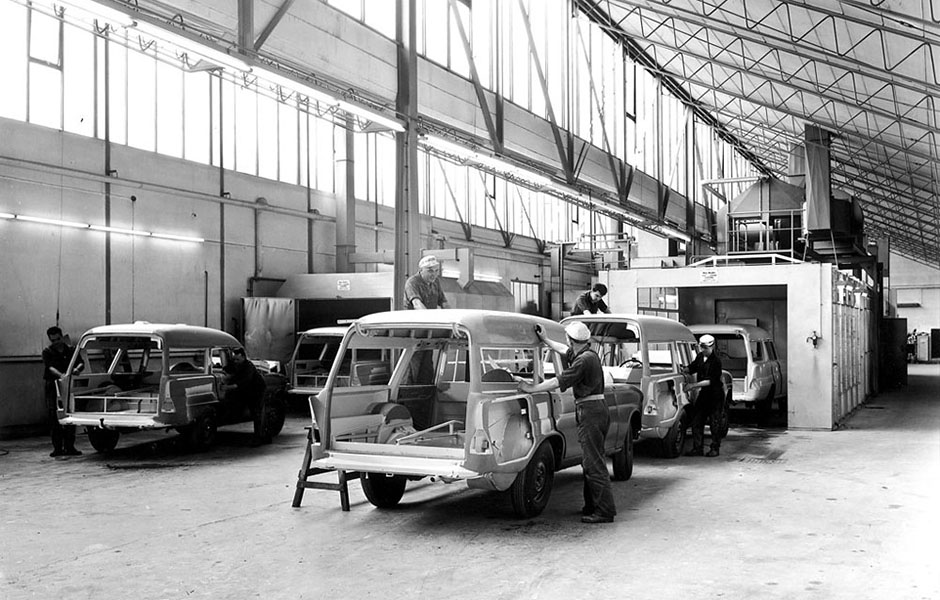 Mercedes-Benz as a company was a late comer to the wagon market. Demand pre-dated their inclination to produce their own designs and resulted in the use of trusted outside vendors. Here we see the delightfully simple production line of the Binz company. Generally associated with Ponton wagons and utility vehicles, Binz offered modified fintails as well. The two cars in the foreground appear to be partially completed ambulances or hearses based on the high rooflines. Such specialized hand fabrication was not feasible within MB’s production facilities at the time.

With the recent introduction of the gorgeous CLS Shooting Brake, Mercedes-Benz has dispelled the notion that a ‘station wagon’ design must necessarily lack the harmonious lines of the sedan it was derived from. I think the general consensus regarding the shape of latest CLS derivative ranges from excellent to downright stunning.

The new shooting brake – a definitive term from England’s early 19th century lexicon and derived from a vehicle’s gun toting capabilities – serves as the ultimate expression of a line of wagons that began 36 years ago with the 123 series wagons. However, 1977 wasn’t the first year a buyer after the more practical features of a wagon could drop into their local dealer and order one. It was the first year the factory offered a wagon that was in fact constructed by the factory.

The demand was there from the middle ’50s through the ’60s and Mercedes subcontracted with reputable coachbuilders BINZ and IWA to construct a variety of unique wagons using different drivetrains. Binz, founded in 1936, was constructing MB based wagons well before the ’50s and is still in business. IWA. located in Belgium, is known for their 111 Fintail wagons and surviving examples are sought after by those MB enthusiasts who appreciate their quirky design and rarity, your author included. Let’s take a quick at some of the more interesting wagons from Mercedes-Benz over the last six decades. 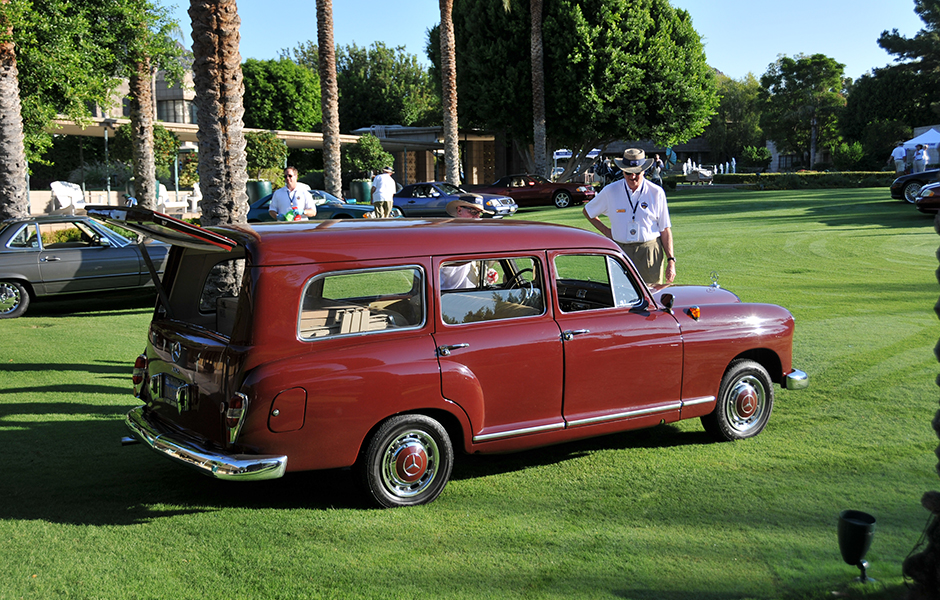 While not quite as stylish as the new CLS Shooting Brake, Ponton wagons were generally the province of Binz and about 5,667 were produced. With 2,439 constructed, the 180D was the most common platform. 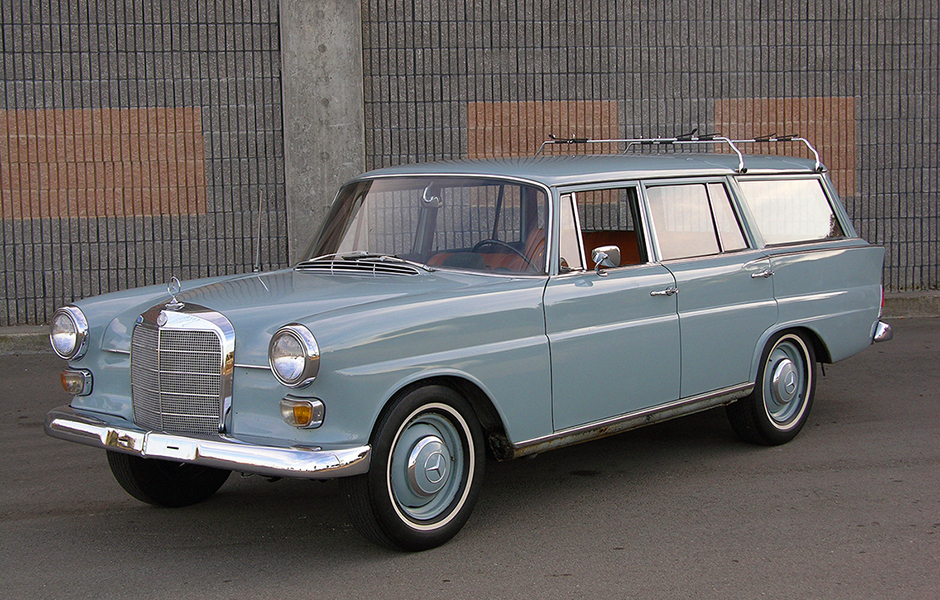 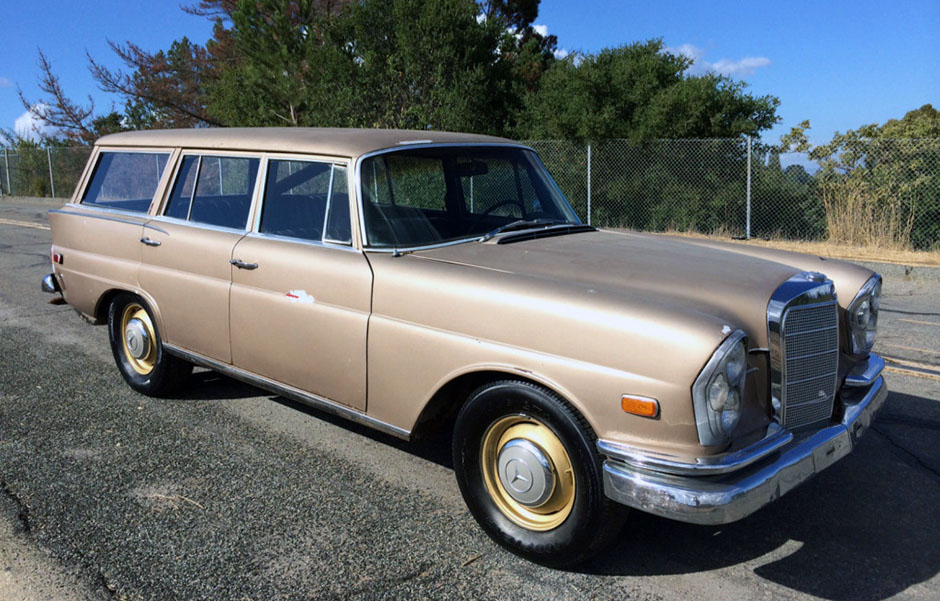 While Binz did construct utility vehicles based on the 111 Fintail platform, Belgium’s IMA S.A. specialized in the Fin wagons and also utilized various engine/transmission combinations. Again, diesels were the most common drivetrain, chosen in the interest of durability for these ‘Universal’ wagons. All were fitted with 15” wheels as well as heavy duty rear suspension and a Boge hydro-compensator strut over the rear axle. The top photo reveals a base, short nose 4-cylinder 200D variant in horizon blue. Universal Wagon buyers could expect to spend a 33% premium over the cost of a standard Fintail sedan. Production ended in 1967, the end of the Fintail series production. Bottom photo reveals the rarest of the IMA wagons, a bronze 230S Universal. 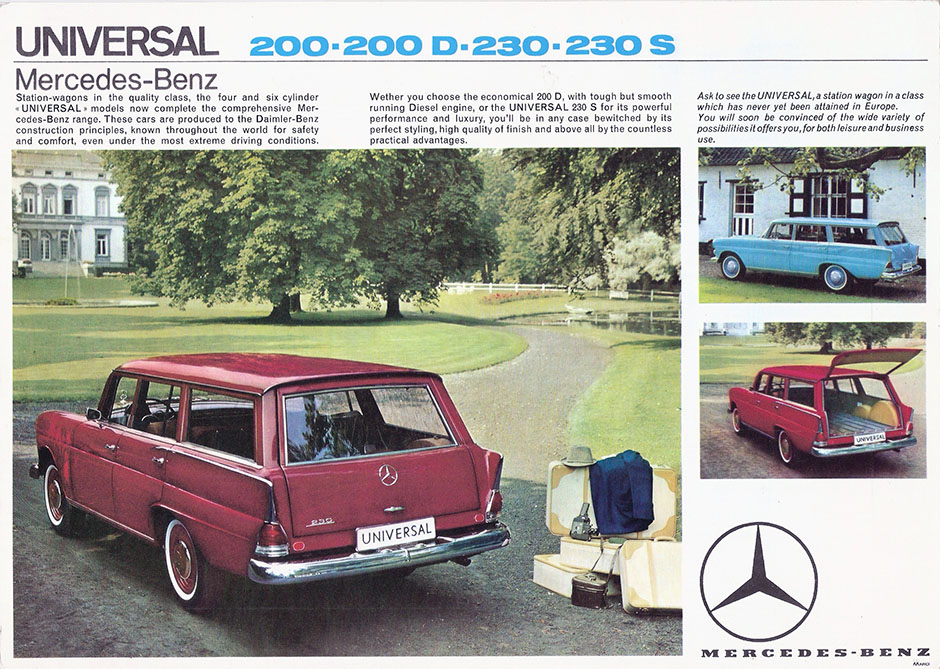 This charming original IMA Universal brochure portrays the practicality of the Fintail wagon. 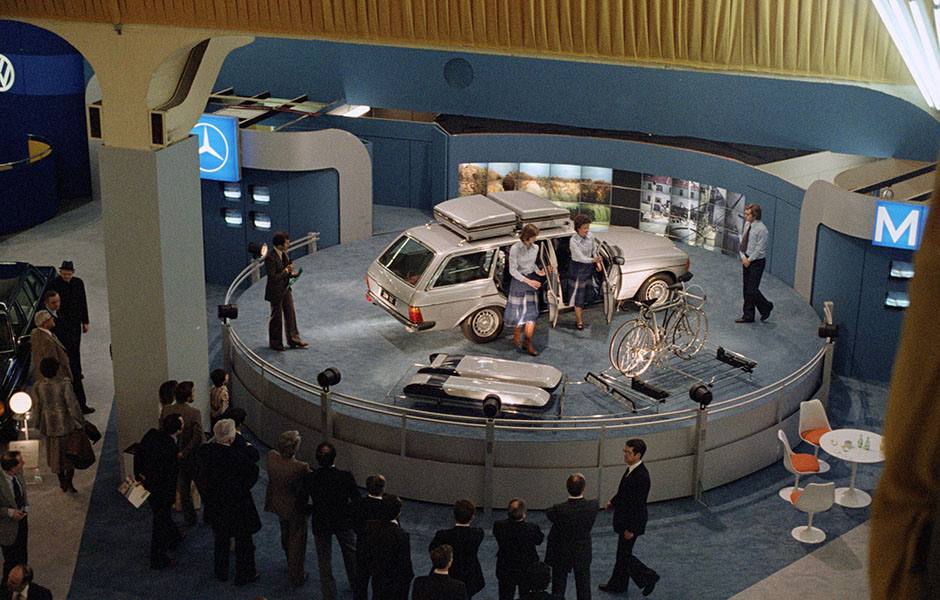 The 123 series wagon debuts in 1977. Outside vendors were no longer needed once the milestone 123 series was introduced. The wagons, offered with 4 and 6 cylinder gas engines and 4 and 5 cylinder diesel engines proved highly desirable globally. With 199,517 constructed over the range’s 9 year model run, 123 wagons were particularly successful for MB and good examples are sought after today. 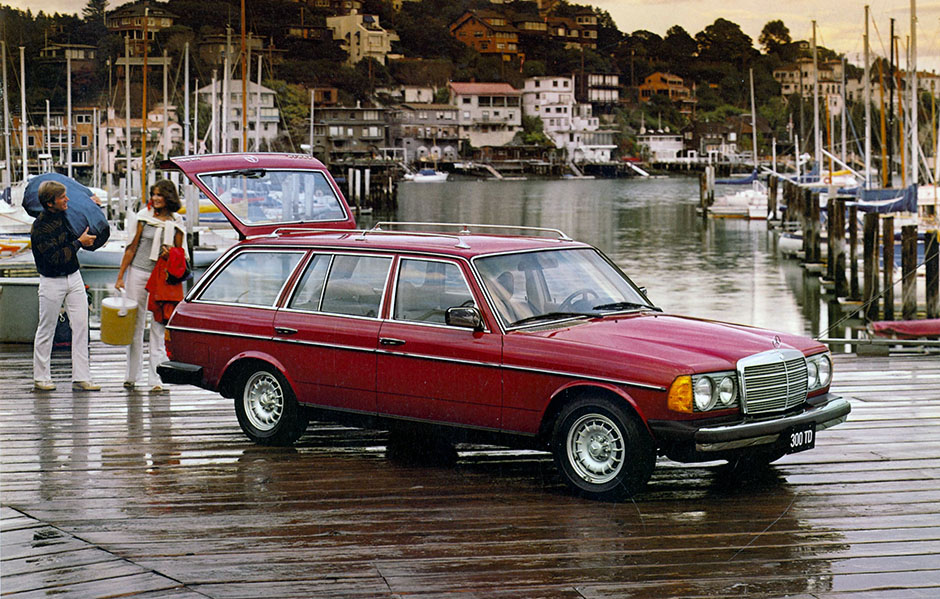 The US market received the crisply styled 5 cylinder 300TD Turbo in 1981 and it became a most elegant and efficient family car. Self leveling rear struts kept things on an even keel when loaded with kids and/or supplies. The car pictured is a US model as evidenced by its DOT mandated 5 mph bumpers. Top speed was 103 mph and 28,219 units were sold globally. 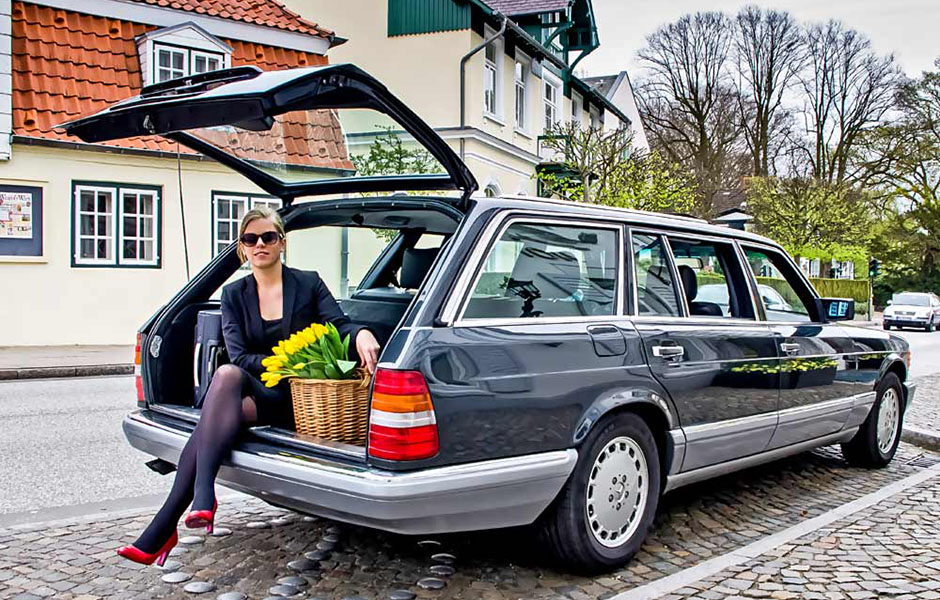 There were anomalies outside Mercedes-Benz production and that of their authorized vendors. How about this 560SEL wagon! Created in Europe and looking rather stylish, this S-Class Shooting Brake pre-dates the CLS by decades yet achieved similar goals, S-class refinement combined with the utility of a wagon. Yes, I would love to own this wagon as well. 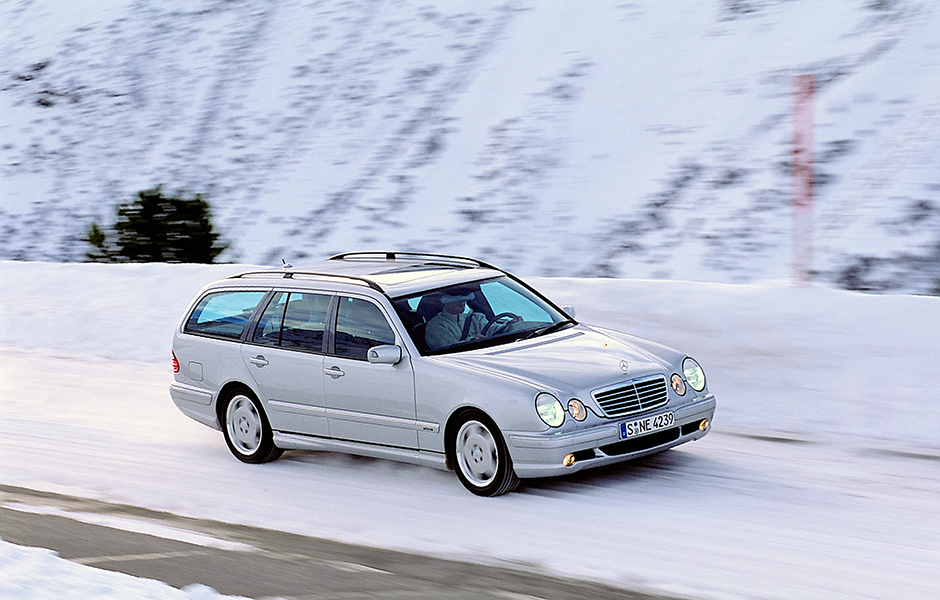 While narrow, the market for a high performance MB wagon was certainly a possibility and AMG explored this genre with its W210 E55 wagon in 1999. Unfortunately this fabulous wagon was not certified for the United States market otherwise I would be driving one today. Combining 350 odd horsepower with improved brakes, higher levels of grip and subtle detail improvements resulted in a compelling all around driver. Production was undoubtedly minuscule. 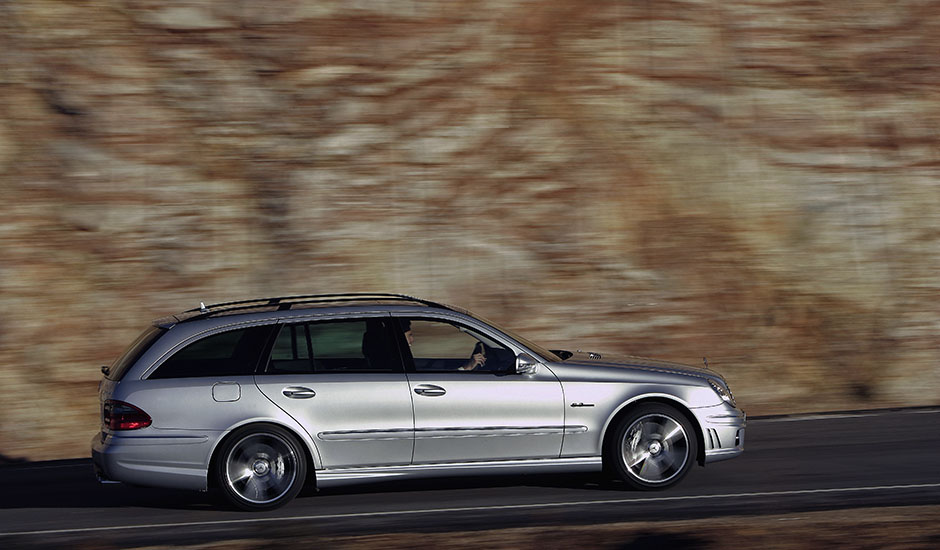 Is this the most extraordinary Mercedes-Benz wagon? I think so. The sensuous and well balanced W211 series E-Class wagon proved to be a most attractive basis for the spectacular, understated and outrageously muscular E55/E63 wagons. Lacking the contrived styling of the next generation W212 series, the supercharged E55 wagon and the normally aspirated E63 wagons are equally at home attending a track day event or an evening out to dinner with friends. Available on a special order basis in the US, these wagons are destined to be collectible. 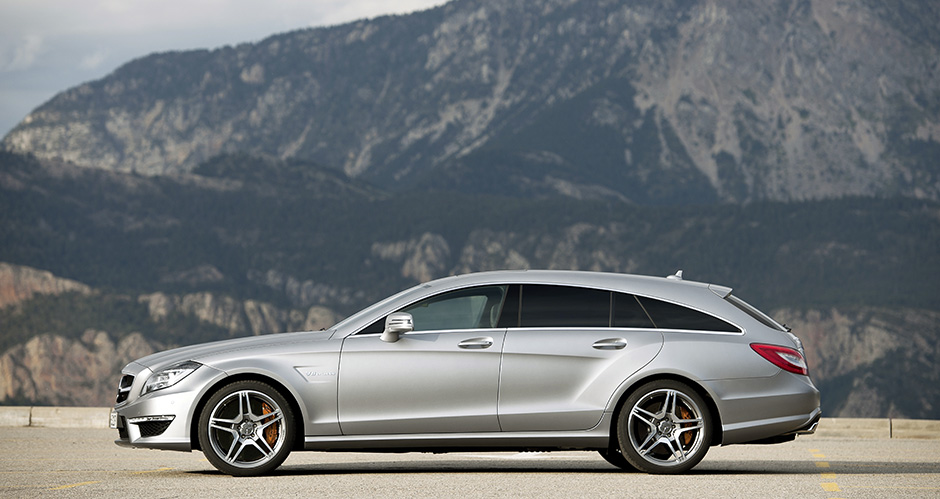 So, the lineage that began with the homely Ponton wagons of Binz and flowed through the quirky Fintail Universals, the epic 123 series and subsequent wagons terminates – for the time being – at this grand design: the CLS63 Shooting Brake 4Matic. While its practicality is somewhat compromised by the general lack of rear 3/4 side visibility, this ambitious project rolls every production automotive desire into one wild package. Buyers receive a breathtaking segment defining style, towering horsepower, excellent foul weather grip, potential track day enjoyment, S-Class opulence and the practicality of a station wagon, or as it is described by the British and now Mercedes-Benz: a Shooting Brake.