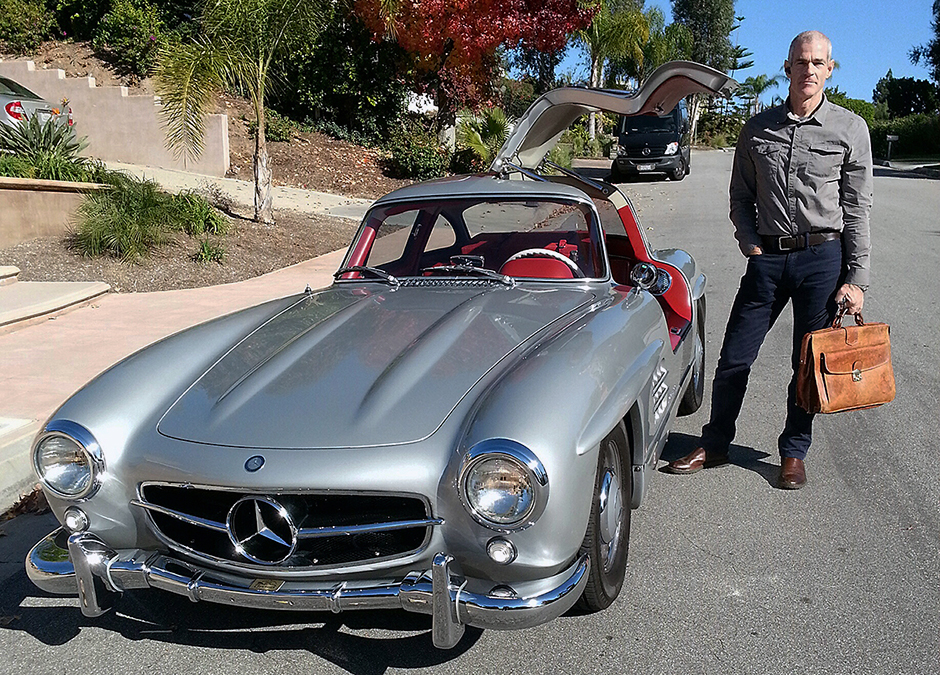 Your author ready to head home from Los Angeles in an Ostermeier Gullwing. My less that pleased expression was a result of a serious title snafu.

All cars below have been sold – See our current listings HERE

The reason newsletters were rather sparse in 2015 was because I was very busy chasing cars. No TV network has picked me up as yet so I roared around the country on my own nickel. It was a great year that began with the purchase of a nice Ostermeier Gullwing re-creation, the car Mercedes-Benz loves to loathe. There is a demand for them in the US and the 19k mile silver/red 1999 model I bought and sold literally within a few hours was a good one.

There was one small detail that popped up after(!) I had paid for the car and was taking possession: The title the seller casually handed me as he whooshed off for a holiday in his new RR Phantom Coupe had a lien holder. The title I was shown before wiring funds did not! I owned half an Ostermeier for which I paid low six figures. Heart attack time. We worked it out over the next 2(!) weeks but it was a large reminder to cover every possible kink before paying for a car.

The remaining deals during 2015 presented no such problems and I’ve put together a snapshot of some of the more memorable acquisitions. Sorry, no 540Ks or C111s came my way but there were plenty of excellent affordable classics. If you have something for sale that matches what you see below, give me a call. 2016 will demand I find another 75 or so cool MBs! 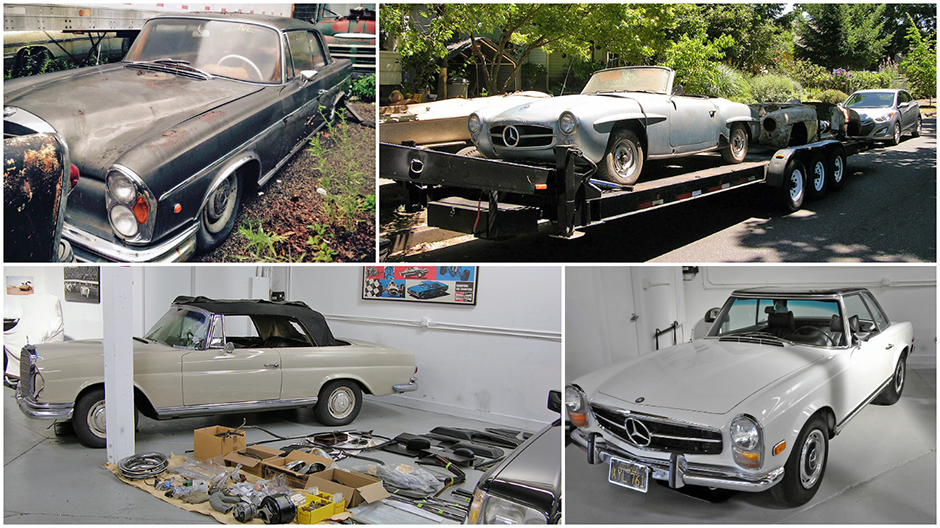 We’re all excited about quasi-barn finds and more than a few found me last year. The grey 300SE coupe was sitting in an Ohio salvage yard and is now being restored by a (brave) MBCA Regional Director. The 181 Beige 250SE Cabriolet required a trip to Pennsylvania and partial re-assembly during one of the fiercest rain storms I’ve ever experienced. Extracting the 1.5 190SLs from their decades long slumber deep in a Portland OR property was treacherous. I never relish being underneath teetering oldtimer MBs. but we managed to the return the two cars to the ground and get them loaded. The 190SL hulk had all ID numbers/stamps in place and will likely emerge as a perfect 190SL in the not so distant future. The best Pagoda find was a structurally perfect black/yellow plate CA car that had been sitting for 20 years in a parking garage in SF! It still amazes me that this scenario still exists. An exciting group of cars. 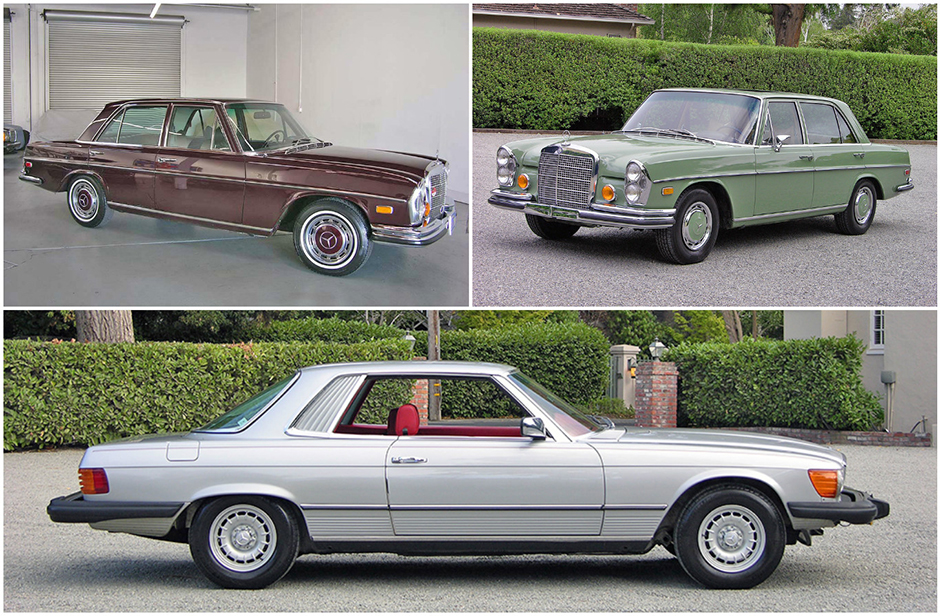 Clockwise from upper left: Exceptional 108s are impossible to find but two great cars found me early in the year. The dark red/black SWB 4.5 was the holy grail – single owner, 31k miles, original paint/interior, all records etc. It had been sitting for a decade or so locally. The green LWB 4.5 was the ultimate specification with sunroof, floor shift and mint original full leather. Gorgeous car but it killed me with mechanical needs. We’re always interested in superb SLCs and this silver/red 1979 fit the bill perfectly. 80K miles, flawless original leather/dash and neurotic care for decades. The 80 yo seller was weeping as I drove her baby away. Great group of affordable MB classics. 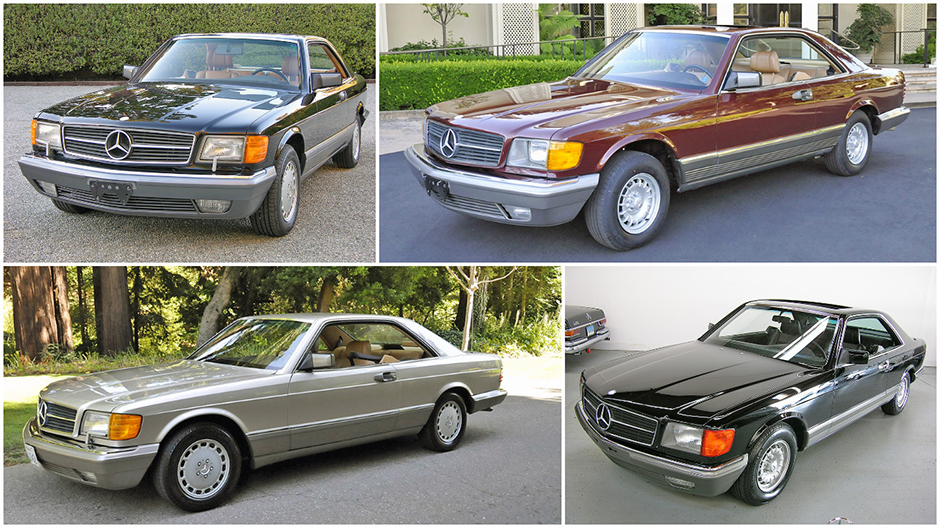 Clockwise from upper left: Great SECs always find homes and I chased these cars down last year. The black/palomino ’90 with only 60k miles now sits in Washington state. A US 500SEC is a cool car but only if spotless and correct like the Cabernet/Palomino 1985 pictured. Great car and sitting now in Washington DC. The blackblack 50k mile Euro car came from Montana and after removing the bling (AMG alloys, tinted glass, AMG steering wheel, gold package etc.), and sorting cosmetics and mechanics, the car was absolutely spectacular. And tastefully lowered as well. Of course the 560SEC US models are prevalent in CA. The low mileage smoke silver/palomino ’88 was driven to Tennessee by its new owner . Lovely cars. 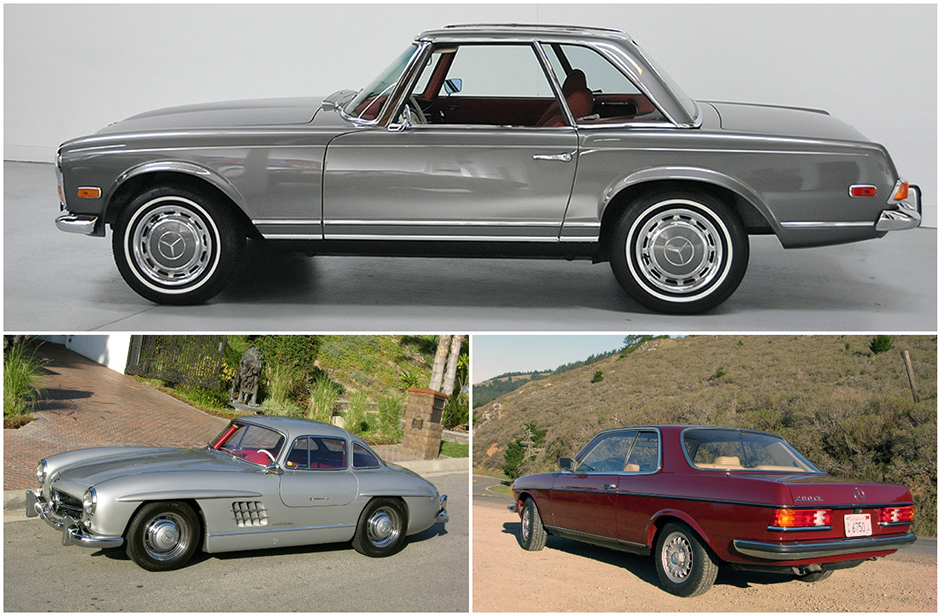 Clockwise from upper left: The fully restored anthracite ’69 280SL allowed me to test the upper end of the Pagoda market. The car was breathtaking but took quite some time to sell. Now sits in Arizona. My very cool orient red Euro ’81 280CE 4-spd went to Louisiana and I don’t know where the Ostermeier ultimately went.