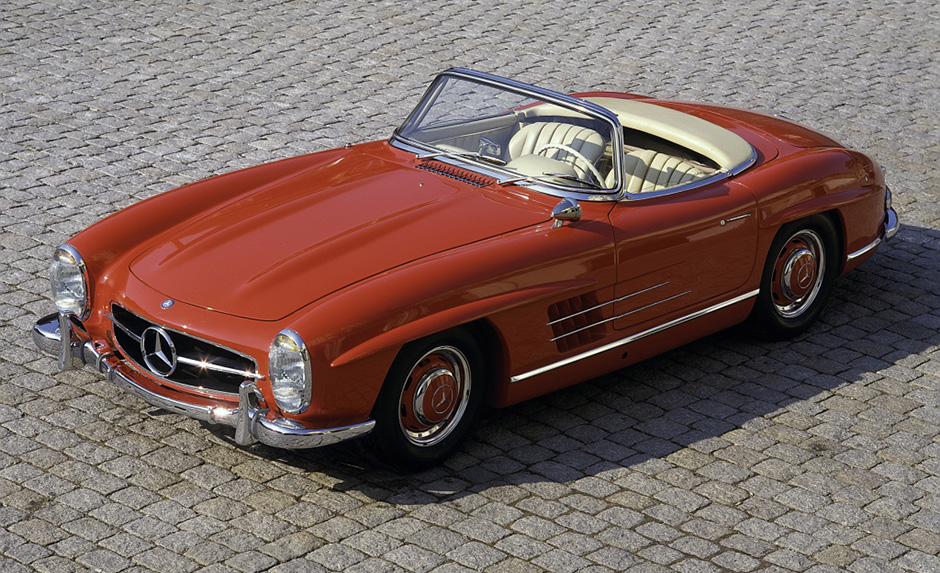 The Mercedes-Benz 300 SL, famed for its distinctive gullwing doors, appeared in a new guise in 1957: At the Geneva Motor Show, held that year from March 14, 24, Daimler-Benz unveiled a fleet-footed roadster (W 198 II series). It was the company’s answer to the demand for a high-performance open-top sports car.

The roadster succeeded the 300 SL coupe built from 1954 to 1957. Compared with its predecessor, the roadster had a slightly modified front end and vertically arranged headlamp lenses. It also boasted improved running gear, the most significant design difference being a modification to the coupe space frame which allowed lower entry sills for easier access to the roadster and doors hinged at the front. These changes also made it possible to accommodate the easy-to-open soft-top roof.

A car for North America

The idea to replace the Gullwing with a roadster came from Maximilian “Maxie” Hoffman. An Austrian by birth, Hoffmann had been importing Mercedes-Benz vehicles to the United States of America since 1952 and was the principal driving force behind the initiative to develop the 300 SL racing sports car (W 194) into a production coupe. In order to realize this goal Rudolf Uhlenhaut returned to the space frame and technology of an abandoned racing prototype from the year 1953.

Karl Wilfert and Friedrich Geiger developed the racing prototype into a production model. The six-cylinder in-line M 198 engine that powered the racing sports car now became the basis for a three-liter six-cylinder in-line unit for the series SL. It was the first four-stroke production engine at all to feature direct gasoline injection. The addition of direct injection boosted engine performance to 215 hp (158 kW), a sizable increase compared with the 175 hp/129 kW produced by the naturally-aspirated W 194 engine with three downdraft carburetors. Hoffman had already persuaded the Stuttgart development department to use the Mercedes-Benz 180 as the basis for the 190 SL roadster (W 121), the car that made its debut in 1955. By 1957 the importer was keen to translate the success of this elegant open-top tourer on the North American market to the larger and more powerful 300 SL. He lobbied vociferously in Stuttgart to have Mercedes-Benz develop a roadster out of the Gullwing.

Launched by Daimler-Benz in 1954, the Mercedes-Benz 300 SL was a breathtaking sports car, and one which continued in the tradition established by members of the legendary S to SSKL families. Given the history of the brand, it seemed only logical to turn this vehicle into a classic roadster version for the road. In addition, it would mean the elegant entrance onto the automotive scene of an open-top sports car that embodied the fascinating blend of dynamically flowing lines and top sports appeal.

The success of the roadster, of which 1,858 units were built between 1957 and 1963, was confirmation of the decision taken by Maxie Hoffman and the Mercedes-Benz developers. The Mercedes-Benz 300 SL roadster successfully reinterpreted brand history based on the company’s most recent motor sport triumphs. At the same time, the concept of a powerful and elegant open-top sports car became firmly established as the leitmotif of the SL-Class.

In 1957, however, many fans of the coupe were saddened to see the departure of this extraordinary sports car with its distinctive upward-swinging doors. The enormous fascination the car had inspired was expressed in the familiar names people had spontaneously given it. When the sports car was premiered at the International Motor Sports Show in New York in 1954, the North American public christened it the Gullwing. And French fans of the streamlined coupe, similarly inspired by the upward-swinging doors, named it Papillon (butterfly).

But the unique door solution was anything but a flash of inspiration on the part of the developers designed to give the sports car the edge over the competition even at standstill. Quite the contrary. The roof-mounted, upward-swinging doors were very much an integral and necessary part of the overall concept, since the highly robust, lightweight space frame designed by Rudolf Uhlenhaut in 1952 for the racing sports version of the 300 SL left no room for conventional doors.

In fact, in prototype versions of the racing sports car the upper edges of the cross members were so high that the upward-swinging doors ended at the lower edge of the side windows. Not until the long-distance race at Le Mans in June 1952 did Uhlenhaut give the doors a slightly fuller length. This design was then the version that found its way into the racing sports prototype of 1953 and ultimately also the W 198 I, which went into production as a series sports car in 1954.

First roadsters to be raced

The idea that the 300 SL was also conceivable as a vehicle without roof and gullwing doors had been demonstrated by Uhlenhaut as early as 1952. For the Sports Car Anniversary Grand Prix on the Nurburgring that year, he developed four roadsters based on the W 194. They were 100 kilograms lighter than the coupe but retained an identical space frame. So rather than conventional doors, the open-topped cars had half-length “flaps” that swung upwards and outwards towards the engine hood. In the race itself, held on the Nurburgring as part of the program for the German Grand Prix on August 3, 1952, the Mercedes-Benz race department notched up a quadruple victory, with Hermann Lang finishing ahead of Karl Kling, Fritz RieÃŸ and Theo Helfrich.

Mercedes-Benz also entered two of the open-top racing sports cars for the Carrera Panamericana. Only one of the 300 SL racing roadsters started the race, however, driven by John Cooper Fitch and Eugen Geiger. The second car was piloted from stage to stage by the newsman Gunther Molter. The race was won by the two coupes of Karl Kling/ Hans Klenk and Hermann Lang/Erwin Grupp. Fitch on the other hand was disqualified for an infringement of the rules, having returned to have minor adjustments made to his car during one stage after already crossing the starting line.

Modified frame for the production roadster

The cut-down doors proved a workable solution for racing. But it was decided the W198 II was to have conventional front-mounted doors. That meant the engineers had to make significant alterations to the space frame and create lower entrance sills on either side. Additional tubing had to be added in order to maintain the rigidity of the frame’s design. It left the roadster weighing 35 kilograms more than the coupe, bringing its total weight to 1,330 kilograms.

And when Mercedes-Benz introduced the new hardtop in 1958, the 300 SL roadster outweighed the coupe by as much as 75 kilograms. Unsurprisingly, top speed fell from 260 km/h to 250 km/h as a result. So it was not long before fans of the coupe began making less than favorable comments about the roadster’s softer features, even going so far as to label it a “living room on wheels”. That aside, the 300 SL was without question an outstanding super-sports car for its day. Easier access, the omission of a fold-away steering wheel and the addition of wind-down windows for ventilation when driving with the hardtop in place meant that the 300 SL roadster was a much more civilized vehicle for everyday use. 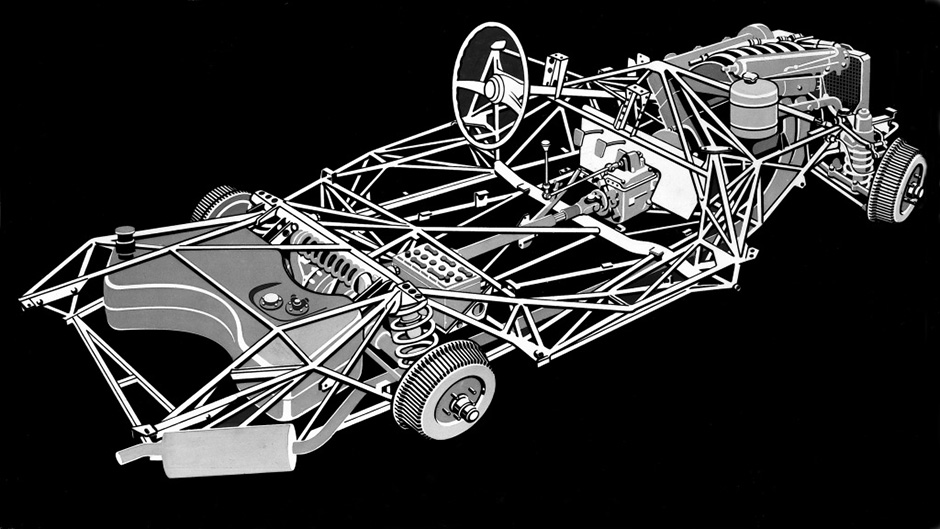 To facilitate easy entry/exit, the 300SL Gullwing’s chassis was modified with lower side tubular frame profile to accommodate the roadster’s conventional door layout.

Handling was greatly improved when the 300 SL roadster was equipped with a low-pivot single-joint swing axle at the rear. At high speeds in particular the coupe’s dual-joint swing axle could often prove a handful even with an expert at the wheel. Mercedes-Benz had already fitted this same single-joint axle featuring an equalizer spring to a 220 a (W 180) model.

In order to match braking capability with performance (the car could accelerate from 0 to 100 km/h in ten seconds), in March 1961 Mercedes-Benz equipped the 300 SL roadster with Dunlop disk brakes all round. Finally, in 1962 the sports car was given a modified engine with a light-alloy block (M 198 III).

The facial features of the 300 SL roadster were different to those of the coupe: vertical headlamp lenses and turn lights helped distinguish the front view of the open-topped sports car from that of the coupe, where circular headlamp dominated.
As protection from the vagaries of the weather, Mercedes-Benz initially equipped the roadster as standard with a soft top stowed under a cover behind the seats. From 1958 onwards a hardtop was offered as an alternative, lending the roadster the appearance of a coupe.

The roadster’s elegant silhouette bore a strong resemblance to that of the Gullwing. However, the roadster with the fixed roof had a much more distinctive waist line, especially when the body and roof were painted different colors. Despite a price tag of 1,500 deutschmarks, the hardtop rapidly became the most sought-after item of optional equipment for the 300 SL. As a result, the roadster was also available without soft top. In 1958 the sports car with soft top cost 34,000 Deutschmarks; without soft top Mercedes-Benz set a price of 33,250 Deutschmarks the same price as for the roadster with soft top at its launch in 1957. 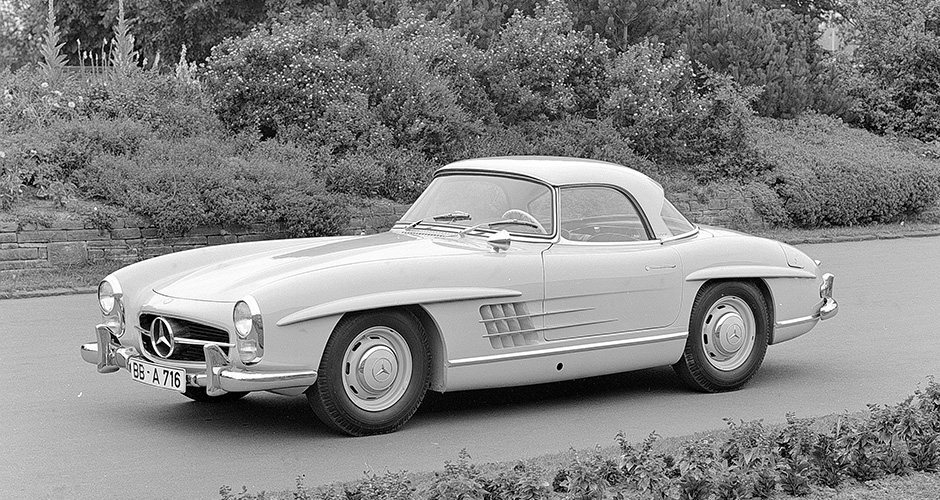 The 300SL ‘coupe’ presented a very handsome profile. The hard top was removable but no soft top was present.

A return to motor sport

The 300 SL hailed from the world of motor sport. The production version also enjoyed success in rallies and long-distance races. But the 300 SL’s time on the race track was pretty much over when in 1954 Mercedes-Benz presented the new W 196 Formula One race car and from it developed the 300 SLR (W 196 S) racing sports car version in 1955.
Nevertheless, a modified touring sports car based on the 300 SL roadster was developed for the American sports car championships, the Mercedes-Benz 300 SLS, of which two units were built. Driving one of these, the American Paul O’Shea finished well ahead of the field in Category D of the 1957 American Sports Car Championship to successfully defend the title he had won in the previous two seasons driving his own Mercedes-Benz 300 SL coupe.

The end of an era

When the last 300 SL was built at Sindelfingen in February 1963 it spelled the end of the first SL era at Daimler-Benz. At the same time it was the end of an era in automotive design, since the 300 SL roadster was the last Mercedes-Benz passenger car to have a separate frame. Between 1954 and 1957 a total of 1,371 coupes were built, as well as 29 coupes with light-alloy bodies and one with a fiberglass body. The years from 1957 to 1963 yielded in all 1,858 roadsters.

During its six-year production run, the open-topped Mercedes-Benz 300 SL became as much an automotive icon as the coupe before it. The sports car was the vehicle of choice for movie stars and celebrities, and it even became a highly successful star of the silver screen in its own right, with cameo roles in everything from Pillow Talk to Charlie’s Angels. Today the Mercedes-Benz 300 SL Roadster is one of the brand with the three-pointed star’s most sought-after classic vehicles. 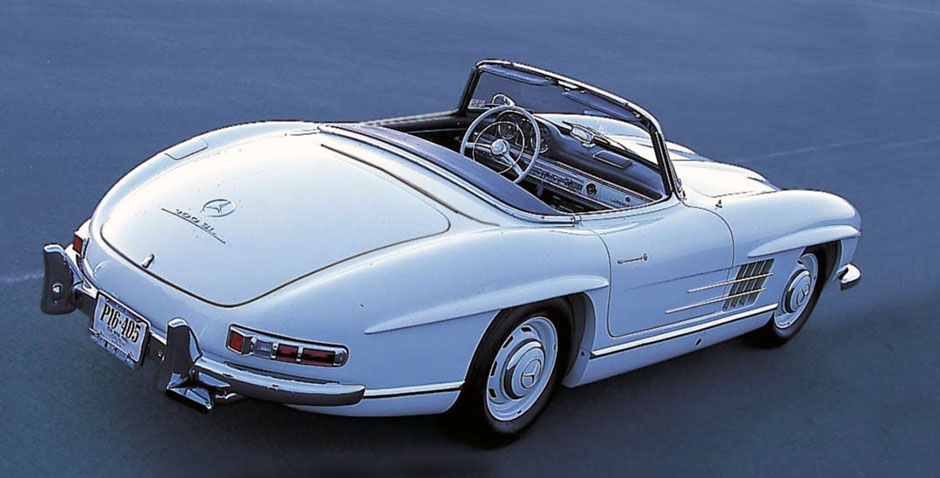 Late series roadsters were fitted with alloy engines and disc brakes. The very last cars produced languished at the factory unsold. Without specific orders, Mercedes simply painted the cars white and color changed them once a buyer emerged.