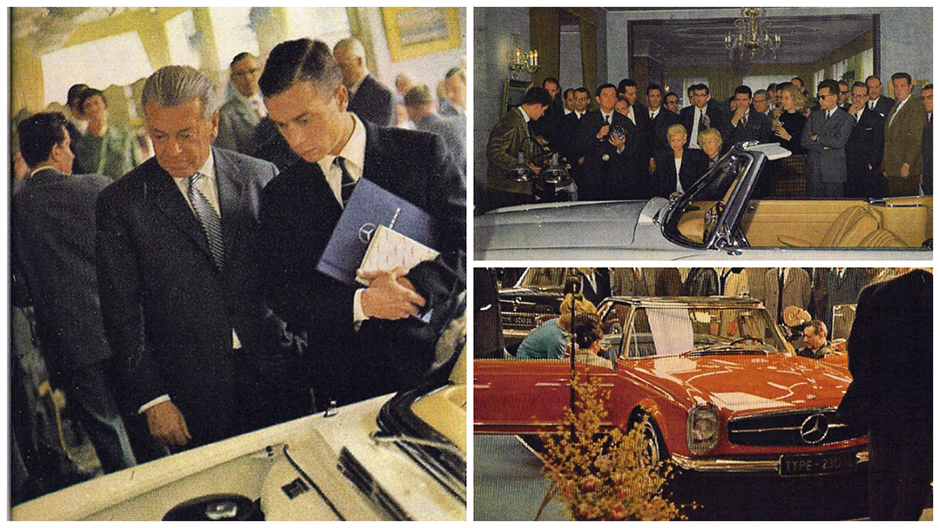 The new ‘Pagoda’ was a sensation in Geneva. At far left is Rudi Uhlenhaut approvingly eyeing his creation. Note the absence of a fire wall pad.

Star of Geneva
The ‘Pagoda’ debuts

It was a rainy day. The slopes were still covered with snow. The Montblanc was shrouded in clouds. For seconds only the sun gleamed over the wet streets of Geneva. This was the typical March mood, no longer winter and not yet spring.

People sat in the comfortable, old Valaisan inns, drank Dole, ate Raclette at open windows, or conversed at the distinguished “Movenpick” while Entrecote, banana Flambee and coffee were served. “Yesterday it arrived. It was transported to the Mercedes-Benz agency. It is supposed to look long and low and to have a fantastic roadability.” The Genevans nodded considerately. For them the Geneva Automobile Salon is no longer a sensation, but they are greatly interested in the new models every year.

Not everywhere was it as quiet as at the Rotisserie or at the Hall des Residences. Advertising banners were spanned across the streets, huge advertising signs were erected: “The superior fuel” – “The outstanding tires”. In the exhibition halls the circular saws shrieked and hammers stroked. Discussions were taking place in all languages. At the Geneva airport, otherwise so quiet, turbines roared. Caravelles, Boeings and Viscounts in quick succession shot down to the runways through the low clouds. Cameras, tripods and searchlights were unloaded. The International press had arrived. After calm days of thaw, wintry, comfortable Geneva , meeting place of ski fans from all parts of the world, experienced a new international highlight: the 1963 Automobile Salon.

At the Mercedes-Benz agency of Geneva, the firm of Perrot, Duval & Cie., the new cars were highly polished during the night prior to the press conference. It goes without saying, of course that this was done with all precautionary measures of utmost secrecy, for the presentation was meant to be a surprise.

Long and low the new car was supposed to look – so the Genevans had said, but nobody had seen the car as yet. But they discussed. Vehicles which have not yet been presented to the public are called “alder king” by the specialists. Aria “alder kings” are particularly interesting, especially when sports car alder kings are involved.

It grew dark. Neon light advertising was reflected on the wet asphalt of the streets. Later people sat with a glass of whisky until midnight . They discussed luxury cars and sports cars. Is there any sense at all to build sports cars for the congested roads of Europe ? The motor journalist filled his pipe. “A combination should be found”, he said. “Perhaps a car which could easily attain 110 to 125 miles per hour, but which is also suitable for the traffic in large cities.” Well, we will see.

After the unveiling, the excited journalists tour Lake Geneva aboard new Pagodas. Not the absence of wheel trim rings. These press cars were VERY early 230SLs.