A brand-new premium-class vehicle generation was presented to the public in September 1972. The first officially designated â€œMercedes-Benz S-Class – internal designation W 116 – replaced the W 108/109 series and was initially comprised of three models: the 280 S, 280 SE and 350 SE. The 280 S and 280 SE models featured the six-cylinder engine M 110 with dual overhead camshafts that had made its debut in the W 114. Six months later the S-Class saloon was also offered with the larger 4.5-liter V8 engine in parallel to the 450 SL and 450 SLC. At the same time the 450 SEL was introduced, its wheelbase lengthened by an extra 100 millimetres; as with its predecessor models, the additional space served to increase legroom in the rear. The long version was also available from November 1973 as a 350 SEL and from April 1974 as a 280 SEL.

One noteworthy engineering innovation first featured as standard in the W 116 series saloons was the double-wishbone front suspension with zero-offset steering and anti-dive control, as tested originally in the C 111 experimental vehicle. This permitted further dynamic handling improvements. Rear suspension was essentially the same as the design that had by this stage been tried and tested over many years in the Stroke Eight models and which was also in use in the 350 SL. The 4.5-litre models were fitted with a coupled-link axle. 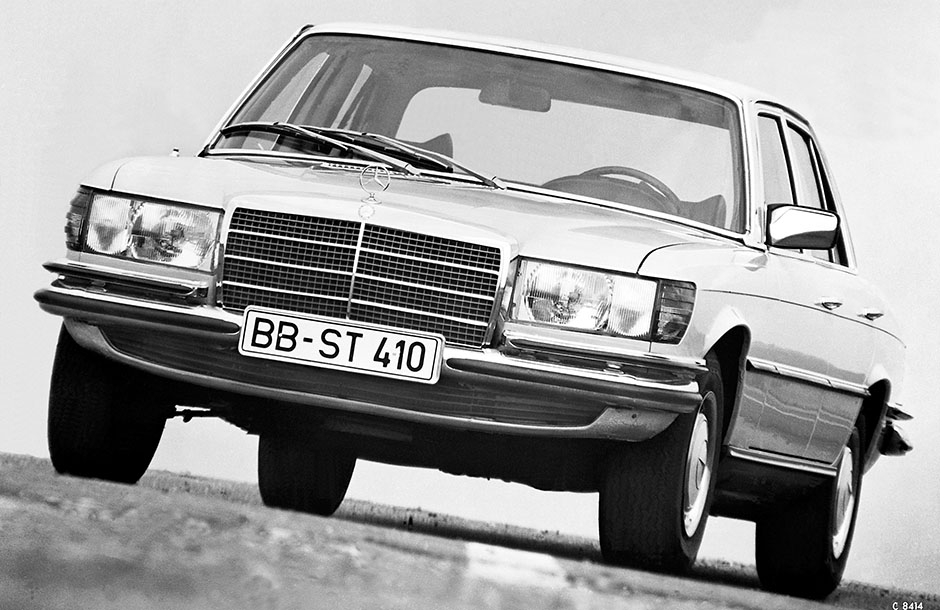 Crisp and clean lines distinguished the new 116. It was a far leaner design that its rather upright predecessor, the 108 series.

In terms of passive safety, too, the S-Class was at the forefront of engineering. The variety of safety design features integrated for the first time into the 350 SL were of course included without exception in the S-Class saloons. The fuel tank, for example, was no longer positioned in the rear end but above the rear axle for protection in case of accident; in the interior, maximum protection was offered by the heavily padded instrument panel, yielding or recessed switches and levers, and a four-spoke safety steering wheel with impact absorber and broad padded boss.

The most significant improvement over the predecessor series was the even stronger safety passenger cell with stiffened roof-frame design, high-strength rigid roof and door pillars and reinforced doors. By controlling the deformability of front and rear end it was also possible to improve considerably energy absorption in the front and rear crumple zones.

Special wind deflectors on the A-pillars guaranteed good visibility. In wet conditions these served as channels for dirty water, keeping the side windows clean in bad weather. Other safety features included wrap-around turn indicator lamps that provided good visibility even from the sides, and large rear lights, which offered good resistance against soiling thanks to their ribbed surface profile. 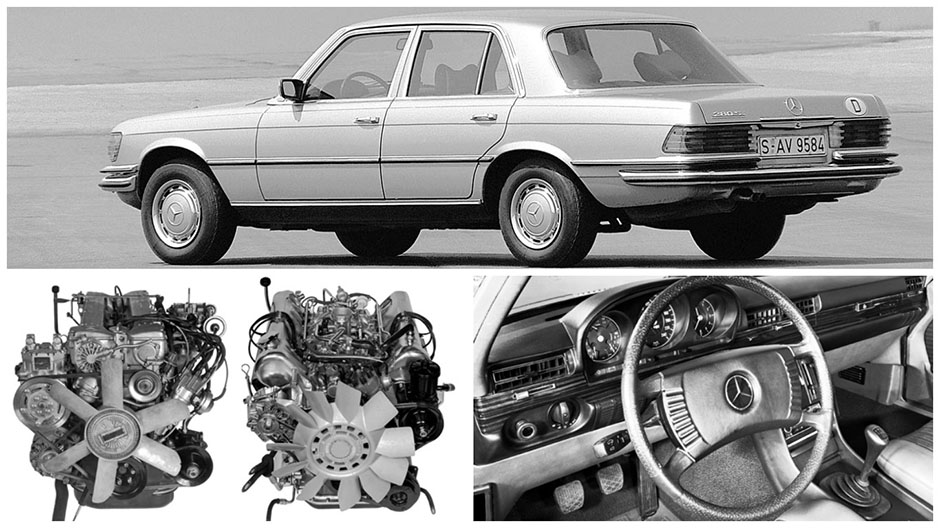 As in year’s past, both long and short wheelbase editions were offered. Engines ranged from the M110 2.8 liter six cylinder to 3.5/4.5 liter V8s to the monstrous 6.9 liter V8 with dry sump oiling. Lower right hand photo reveals a manual gearbox, a feature never offered in the US.

Auto, Motor und Sport, Germany, volume 2/1973, on the Mercedes-Benz 350 SE:
“The pleasure of driving a Mercedes 350 SE is sadly an expensive one and affordable only by a minority. This is regrettable, because for the considerable financial outlay one gets not only representation and a status symbol, but also more importantly a wealth of benefits that one would wish for in any car: A high degree of active safety and crashworthiness, perfected body design, outstanding comfort, large reserves of energy, effortless driving and exemplary craftsmanship. And all these highly desirable features come together to form an overall image in which one thing stands out above all – that this is one of the world’s most perfect cars.