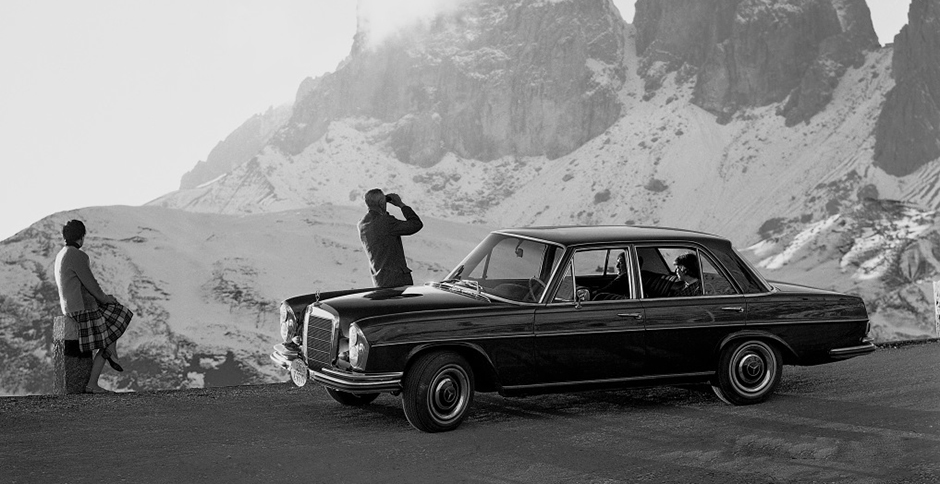 The new premium-class model generation consisting of the 250 S, 250 SE and 300 SE were presented in August 1965, establishing succession to the 220 Sb, 220 SEb and 300 SE fintail models. All three models shared a body designed by Paul Bracq, whose clean lines dispensed with all fashionable excess and whose restrained elegance has timeless appeal even today. In terms of their engineering design, the new models were based to a large extent on their predecessors.

Other than the body, however, new features also included the two 2.5-liter engines, which were developed by increasing the bore and lengthening the stroke of the corresponding 2.2-liter units. Now the crankshaft was mounted on seven bearings, and an oil-water heat exchanger guaranteed improved heat load in the oil system. In the direct-injection version a six-plunger injection pump now replaced the two-plunger pump. In contrast to its predecessor model, however, the new 300 SE was no longer fitted with air suspension. Instead, as with the two 2.5-liter models, it had a hydro-pneumatic compensating spring on the rear axle, which replaced the familiar coil spring and ensured a constant body height regardless of the load.

In March 1966 the model range was expanded to include the 300 SEL, which had a 100-millimeter longer wheelbase compared with the basic model, the extra space serving exclusively to increase legroom in the rear and the entry width of the rear doors. As with its direct predecessor with the same model designation, the new 300 SEL featured air suspension as standard. Internally the models with conventional suspension were grouped under the W 108 model series, the air-sprung 300 SEL however was given its own series with the designation W 109. 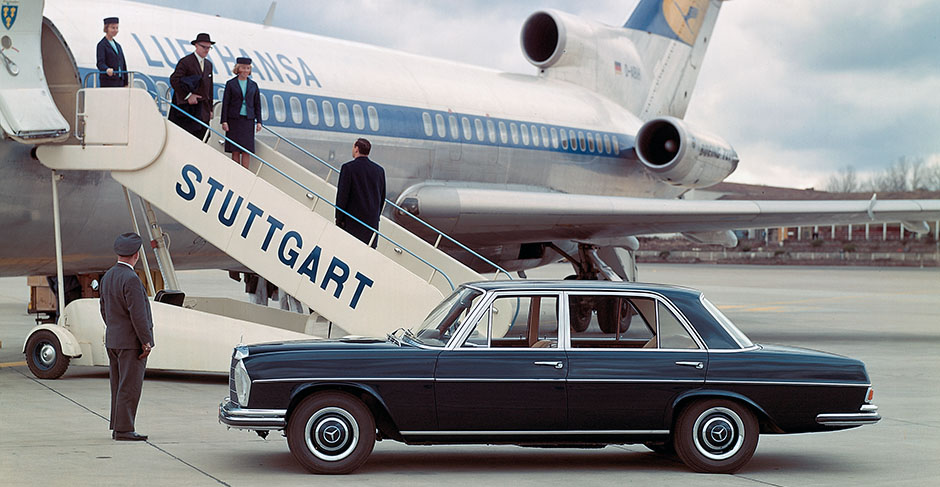 300SEL provided brisk and luxurious transportation from the airport back to the office for the chiefs of industry in Europe in the middle ’60s.

In 1966 and 1967 two very special variants of the 300 SEL were built in Sindelfingen, never intended for series production and specially developed for the Vatican. In June 1966 a landaulet with normal wheelbase was built, which differed from the series saloon in that it had only a single seat at the rear and a landaulet soft-top that stretched to the front edge of the rear doors. Almost a year later, in May 1967, the landaulet was joined by two identical six-seater saloons, which were built on a floor assembly that had been lengthened by 650 millimeters and boasted modified rear doors as well as two folding seats in the rear. The landaulet was intended as a second vehicle for use alongside the Mercedes-Benz 600 by His Holiness himself, whereas the two Pullman saloons were to be used for transporting Vatican guests.

Production of the 250 SE and 300 SE models came to an end at the start of 1968, with the introduction of the two successor models 280 S and 280 SE in January. These differed from their predecessors only in terms of their engines and certain equipment details. The newly-developed 2.8-liter six-cylinder engine delivered 140 hp (103 kW) in the carburettor version, and 160 hp (118 kW) with direct fuel injection. Likewise from January 1968 onward, an output-enhanced version of the injection engine giving 170 hp (125 kW) was fitted not only to the 280 SL, but also to the 300 SEL, where it replaced the 3.0-liter light-alloy engine in service to that point. 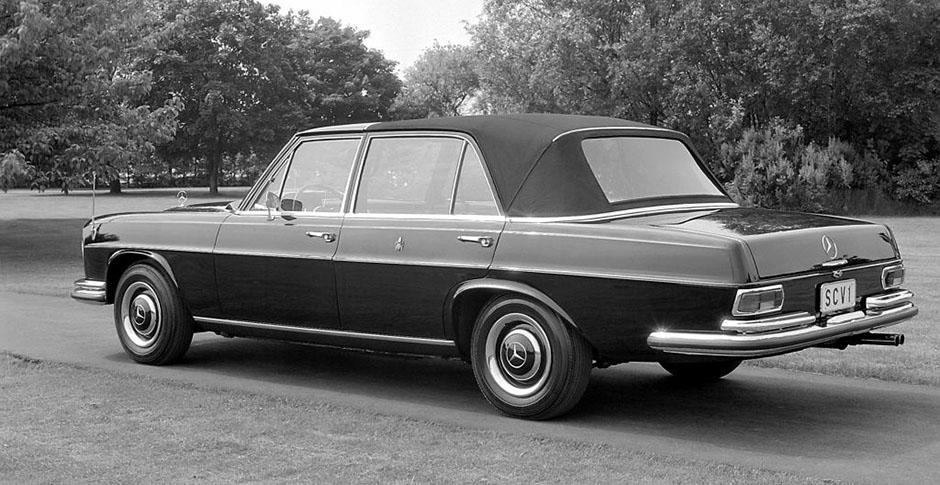 March 1968 saw the introduction of the top-of-the-range 300 SEL 6.3, featuring the V8 engine and automatic transmission of the Mercedes-Benz 600 and hence with the performance potential of a top-class sports car. Its presentation at the Geneva Motor Show caused a sensation, especially as there had been no announcements made prior to the event. The 6.3’s only distinguishing external features were its wider tires, double halogen headlamps and an additional set of high beams. The engine delivered 250 hp (184 kW), but of greater significance perhaps was its mighty torque of 51 mkg (500 Newton meters), which took the saloon from 0 to 100 km/h in 8 seconds and gave the car a top speed of 221 km/h. Although the 6.3 cost over DM 10,000 more than the 300 SEL and was more than double the price of the 280 SE, the Mercedes-Benz 300 SEL 6.3 was the object of comparatively lively interest and unit numbers totaled 6,526. 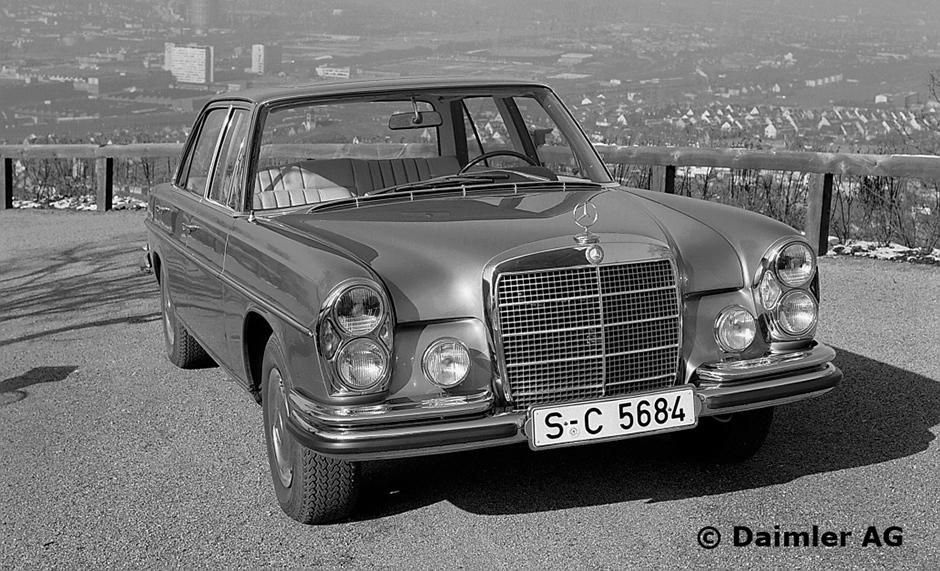 300SEL 6.3 became the sleeper sedan capable of seeing off a Ferrari Daytona from nought to 100km/hr. Now a legendary Mercedes saloon.

One special model variant in the W 108/109 series not available on the free market was built in 1971 â€“ the armoured version of the 280 SEL 3.5. No armoured vehicles had been produced at Daimler-Benz since the bullet-proof Mercedes-Benz 600 Pullman saloon in June 1965, but suddenly there were requests from various federal agencies to develop such a variant. As a result of the attacks carried out on diplomats in Latin America in 1970 the Foreign Ministry was obliged to give special protection to the official cars of some of its mission chiefs. The result of these measures was the armoured 280 SEL 3.5 model, of which 28 units were built between May 1971 and September 1972 and delivered to West German foreign missions in hot spots.

Production of the highly successful W 108/109 series came to an end in September 1972. In total 383,341 vehicles were built. Their successor was the W 116 series, the first models to be given the name S-Class. 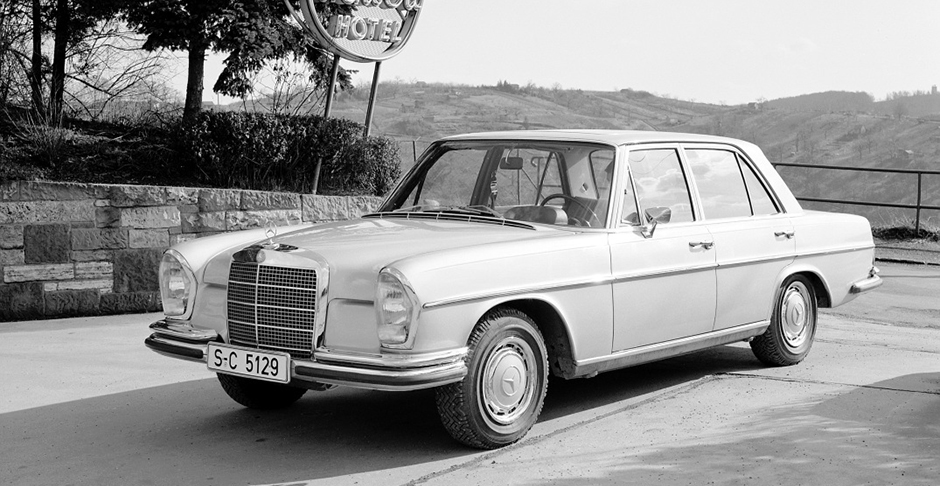 Auto, Motor und Sport, Germany, issue 2/1966, on the Mercedes-Benz 250 SE: “The ease, quietness and gentleness when driving, the handling safety at high speeds and on cornering, the outstanding interior equipment, the attention to quality and design paid even to secondary details speak for themselves and rank the 250 SE well up with the worlds best cars.”

Auto, Motor und Sport, Germany, volume 6/1968, on the Mercedes-Benz 300 SEL 6.3: “We took delivery of one of the closely guarded first units, a vehicle not yet even fitted with the 6.3 designation. The lack of model badge seemed to cause confusion to many a Porsche 911 and 911 S driver, normally accustomed to being kings of the motorway and who now suddenly found themselves being left looking flat-footed by the distinguished and relatively harmless-looking Mercedes. Should any of them be reading this, we would wish to point out that they have no cause to return their vehicles to the factory on account of deficient performance.