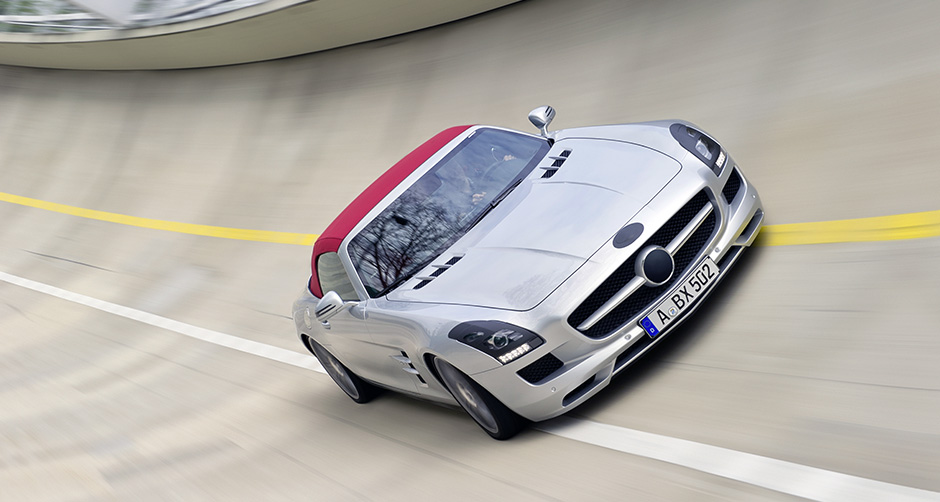 Will the newly announced SLS Roadster overtake the Gullwing in the marketplace? Debuted to the press last month, the attractive open SLS just may challenge Gullwing sales numbers.

How will the fabulous SLS AMG Gullwing fare in the marketplace sans the iconic gullwing doors? We’ll find out later this year after the Roadster’s September 13 release. The final design sans camouflage was shown to the press in Germany last month to rave reviews. Meanwhile the prototypes continue to be thrashed about in various parts of the world to remedy any irritating problems that could compromise this next variant of the successful SLS range. Recent media images show the 571 hp roadster circulating the high banks of the factory’s fabled test track in Stuttgart-Unterturkheim. 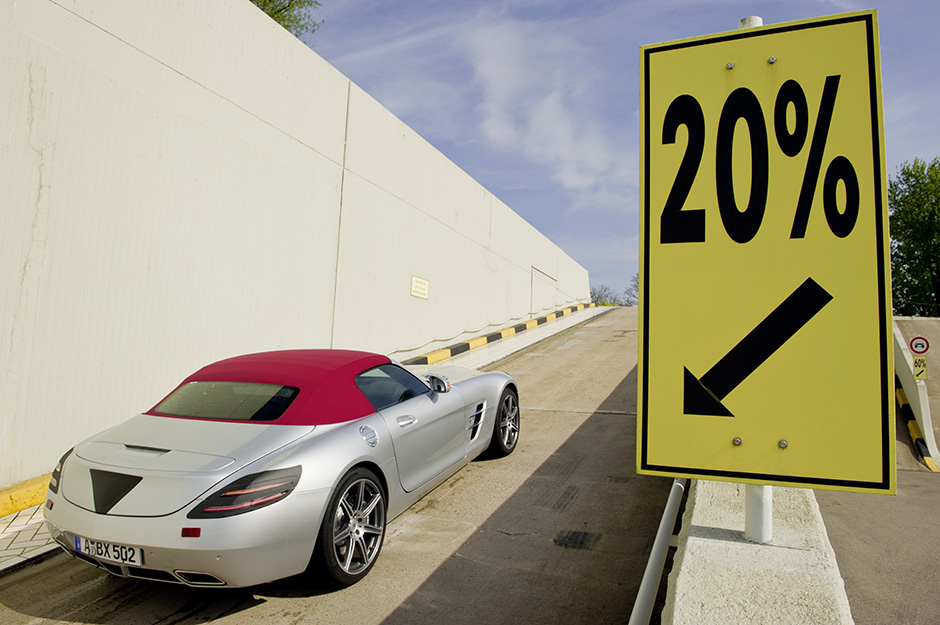 Dare I say the Roadster’s rear 3/4 view is more attractive than the Gullwing’s? I’d say vastly so. Increased chassis side rail wall thickness, additional A-post support struts and an additional cross member behind the seats will insure stability and reduce scuttle shake.

After extensive testing and development by factory driver Bernd Schneider, the fate of the competition GT3’s is now in the hands of a handful of racing privateers, albeit wealthy ones. One of the series the SLS AMG GT3 was designed for, the ADAC GT Masters, started its season at the Oscherskeben circuit in Germany.

The four privately entered Gullwings finished in the top ten in each heat race with the Team Heico car piloted by Andreas Zuber/Lance David Arnold finishing fifth in the first race. However mid-engine technology won the day with former GT Masters Champion Christoper Haase and newcomer Andreas Simonsen winning aboard an Audi R8 LMS. We’ll keep you up to date on this series. 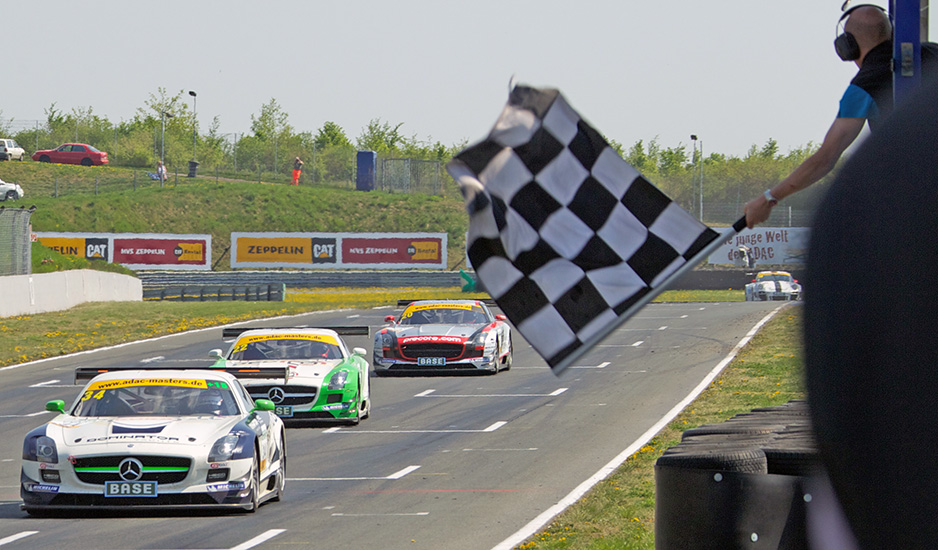 Race 1 at the flag: The SLS GT3s of Primajob Team Heico, MS Racing and Black Falcon finish fifth, sixth and seventh separated by less than one second. 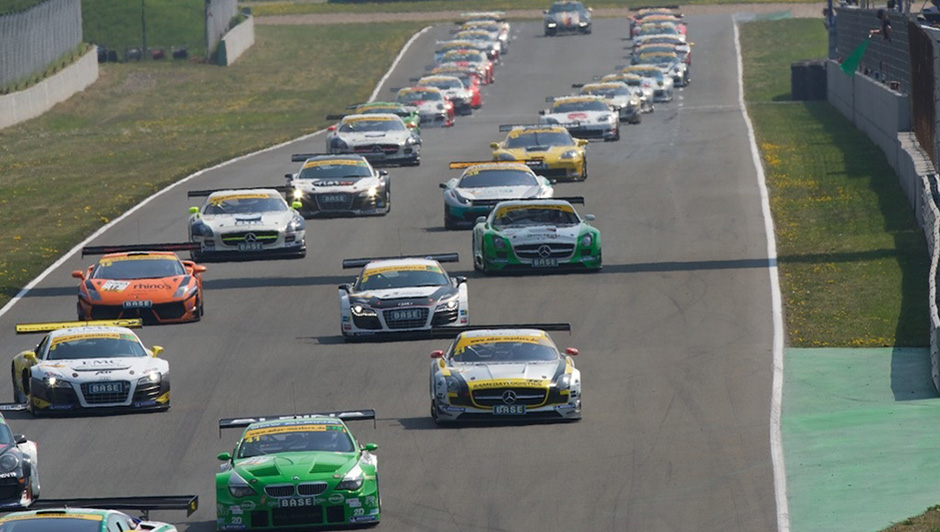 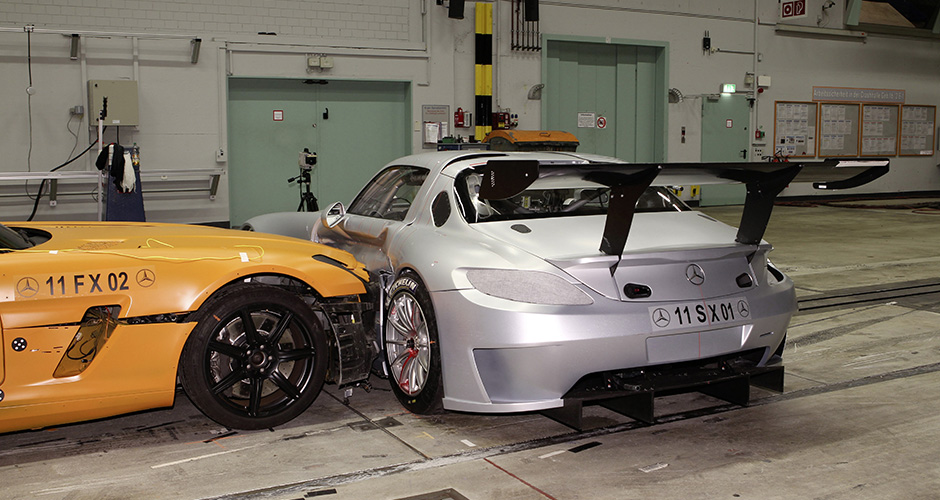 Crash testing a GT3? With racing speeds approaching 200 mph, AMG must insure driver safety in the event of accidents. Here we see a direct driver side impact test simulating the worst nightmare for a racing driver. This is another example of AMG’s thorough preparation. 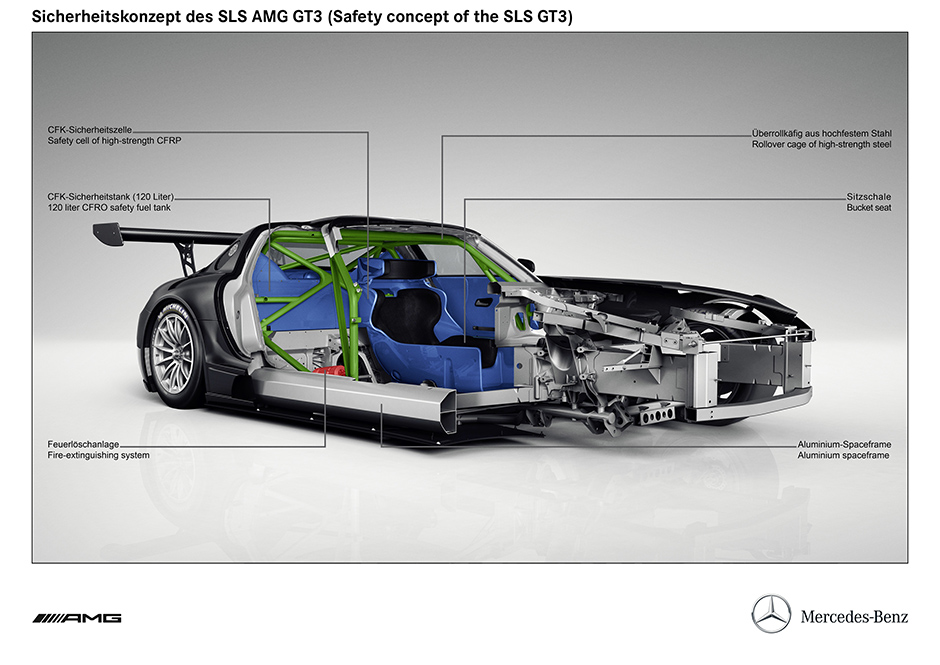 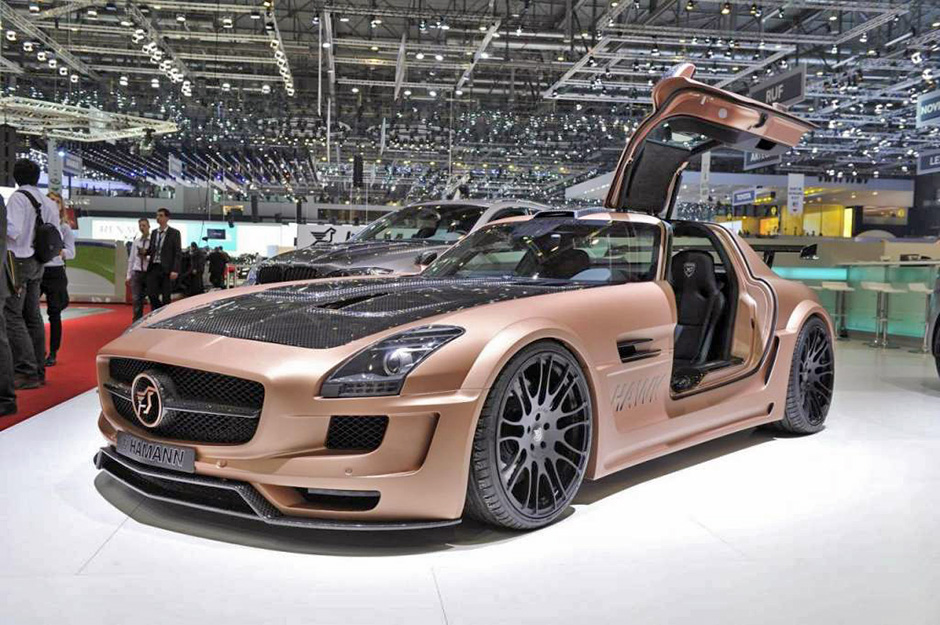 Hamann Hawk: Starting at the front there is a new front bumper fascia with LED lights and enlarged air inlets. Carbon fiber hood allows hot air to escape while the fender flairs provide an extra 60mm on each front side and 70mm on each rear side. Side skirts, rear bumper fascia with diffuser and carbon fiber wing round out the body kit. Performance of the already potent 6.2-liter V8 engine is enhanced with high-performance titanium exhaust manifolds and sports catalysts while a sports air filter is used on the intake side. In concert with a remapped engine control unit, power output is raised to 636 PS (628 bhp / 468 kW) from the standard 571 PS (420 kW / 563 hp) for a 0 to 100 km/h sprint in 3.6 seconds and a top speed of 320 km/h (199 mph). The coilover kit with four height-adjustable dampers and four progressively wound springs lower the center of gravity by up to 30 millimeters. Wheels are Hamann’s own lightweight forged wheels in 9Jx21 with tires measuring 245/30 ZR 21 at the front and 12.5Jx21 with tires measuring 345/25 ZR 21 at the rear 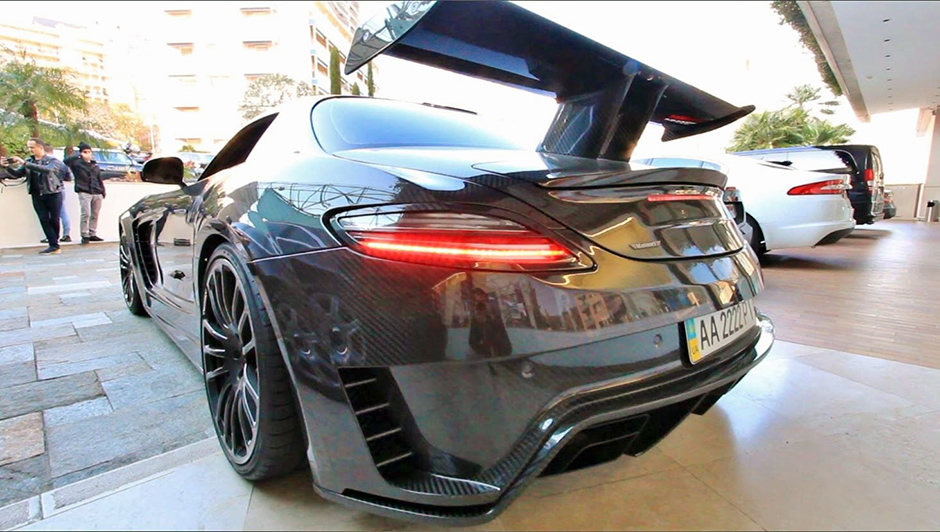 Mansory Cormeum: Designed and named by the tuner’s owner and head designer Kourosh Mansory, the SLS gets wrapped in a complete carbon shell for a 90 kg weight-saving diet and a substantially revised look. The body kit includes a new lightweight roof and wing doors, front skirt with large air inlets, widening fenders that extend the SLS by 66 mm at the front axle and 84 mm at the rear axle, as well as side skirts that make the sport coupe appear lower. At the back is a rear spoiler with carbon flaps and a race diffuser for additional downforce. Engine tuning consists of increasing output to 660 PS (485 kW / 651 bhp) while a performance upgrade to 800 PS (588 kW / 789 bhp) is also in the works. For the wheels are 9 x 20 inch rims at the front with 265/30R20 Michelin tires and 11 x 21 inchers at the back wrapped in 295/25R20 Michelins. New springs and dampers lower the SLS AMG by 20 mm too. On the inside Mansory does its luxuriating thing with a hand fitted soft leather finish with decorative stitching, carbon trim, of course, a newly designed center console and other touches such as the aluminum pedals and sport steering wheel with a full-sized airbag. The name, Cormeum, comes from an operatic aria called Vide Cor meum composed by Patrick Cassidy and based on a sonnet in Dante’s “La Vita Nuova”.