US models grew 5 mph bumpers in 1974. Alloys were optional. This is a 1979 in Astral Silver/Red leather. With sunroof open and all windows down, the SLC is an airy grand tourer.

The maligned SLC
Worth a look

Here’s the puzzle: You want some sort of collectible Mercedes but it needs to fit a seemingly impossible set of parameters – room for four, connected with the classic era of Mercedes (1973 or earlier), sleek, two doors, comfortable, and fun to drive. Some racing heritage would be nice too and it needs to be $10k or less, preferably much less. Impossible? Not really.

I nominate the generally maligned SLC for this seemingly impossible mission. Anyone who has followed my writing over the years knows I’ve always been a fan of the SLC or, I should say, healthy unmolested pre-1974 and post 1978 SLCs. The middle ’70s examples suffered lower power outputs and were fitted with the crude thermal reactors in lieu of proper catalytic converters. Yes, most of the 31,739 US models constructed from 1972-1980 are throwaways due to abject neglect, but there are some gems to be found with patience. 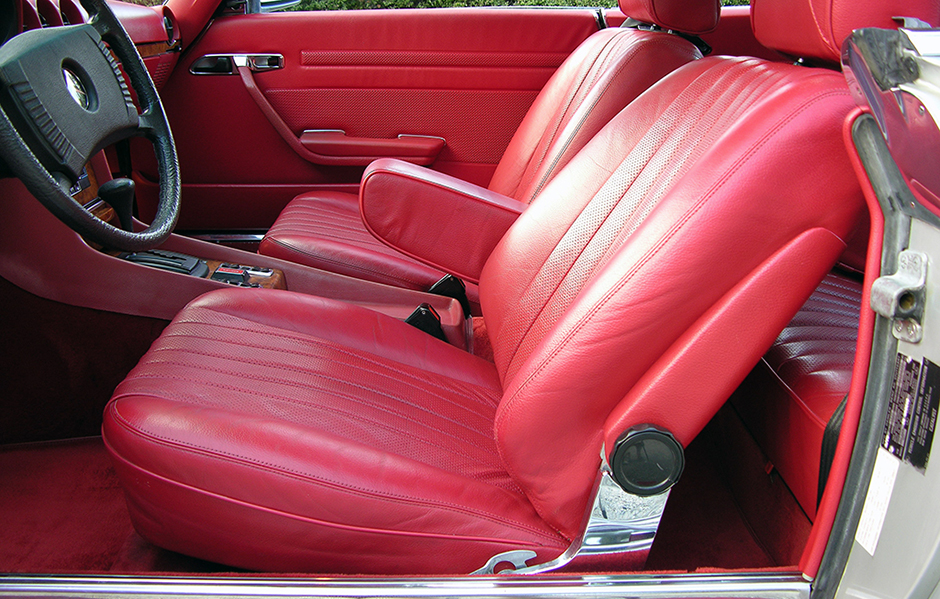 It’s all SL from the door shutface forward. All US SLCs carried leather as standard equipment. Velour was a special ordered option. Driver’s seat reclines further than the SL’s to accommodate…ahem, larger drivers. 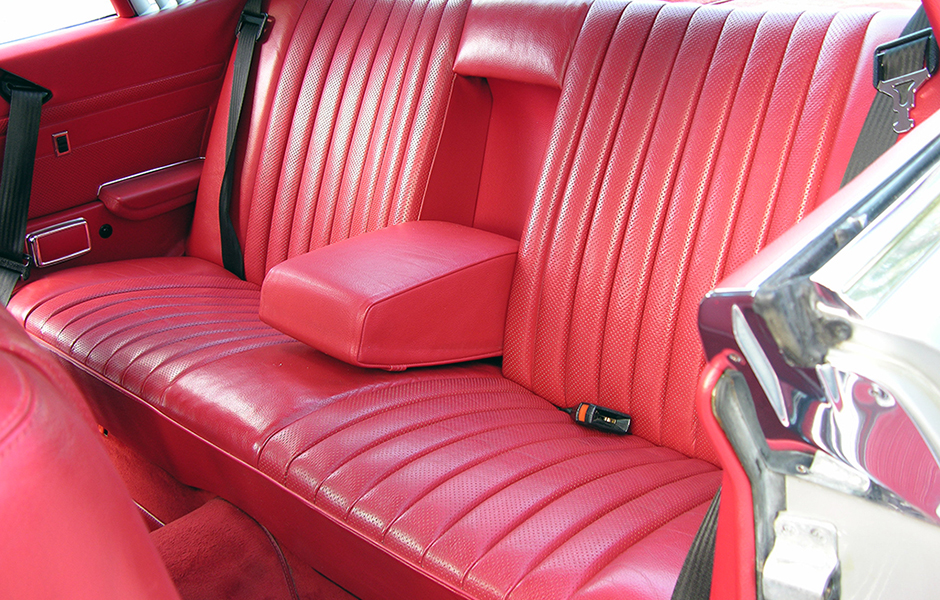 Rear seat is actually comfortable for an adult…once you maneuvered yourself in. Interiors reflected superb fit and finish and a certain taut Germanic elegance. Sadly few exist in the condition of our faultless 1978 450SLC US model.

Essentially an SL from the rear edge of the door forward, the SLC acquired an additional 13.9 inches in wheelbase to accommodate a perfectly usable rear seat. Entering the rear seats is slightly awkward – requiring you to step under the front seat belts – but once seated you find plenty of headroom and adequate leg room with an average size driver at the wheel. Kids are no problem and fit perfectly. I borrowed a few to check this out.

“The SLC was raced more than the SL by the factory and AMG. Mercedes campaigned full rally prepared 500SLCs in the International Rally Championship in 1979 and 1980, finishing 4th in the 1980 season.”

The SLC is no heavier than the SL and with a 14% longer wheelbase behaves so much nicer on the highway, exhibiting none of the SLs short wheelbase choppiness. With healthy engine/subframe mounts, a properly adjusted steering box and taut steering linkage, an SLC is a superb, precise, long distance cruiser. Every US model was trimmed in leather and sadly most SLCs today feature serious leather deterioration, a deal breaker on these cars due to the expense of interior restoration. The fit and finish of the interiors and overall build quality of these cars was fabulous.

The design is a matter of personal taste and I feel it’s aging well. No, there is no top to remove but with all the windows down and sunroof open, the cabin is light and airy. I’m not quite sure of the rationale behind the often flaking silver painted slotted vents occupying the rearmost corner of the each rear window area. Adding some bulk to the rear pillars may have been the goal. 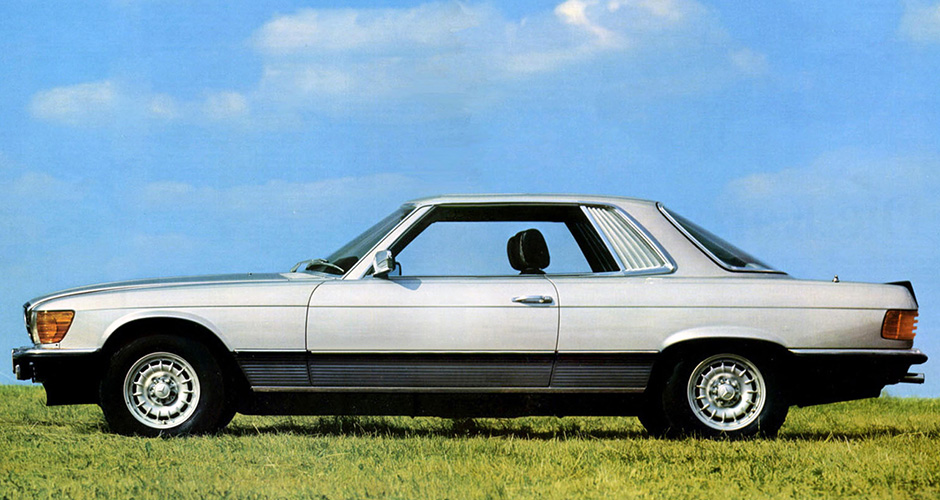 2,769 240hp, five liter SLC 5.0s were constructed for Europeans during 1977-1981. It was an exceptional autobahn stormer in its day and a satisfying tour and event car today. Very rare in the US and typically fitted with catalytic converters and power sapping AIR system.

Did I mention racing heritage? The SLC was raced more than the SL by the factory and AMG. Mercedes campaigned full rally prepared 500SLCs in the International Rally Championship in 1979 and 1980, finishing 4th in the 1980 season. AMG compaigned a full road race prepared SLC in Europe in the late ’70s. The rally/race cars were based on the rare (2,769 constructed) 5.0 liter alloy engined 450SLC 5.0/500SLC production models. With alloy hood and deck lid, these European delivery only SLCs are rare in the US and generally pricey. 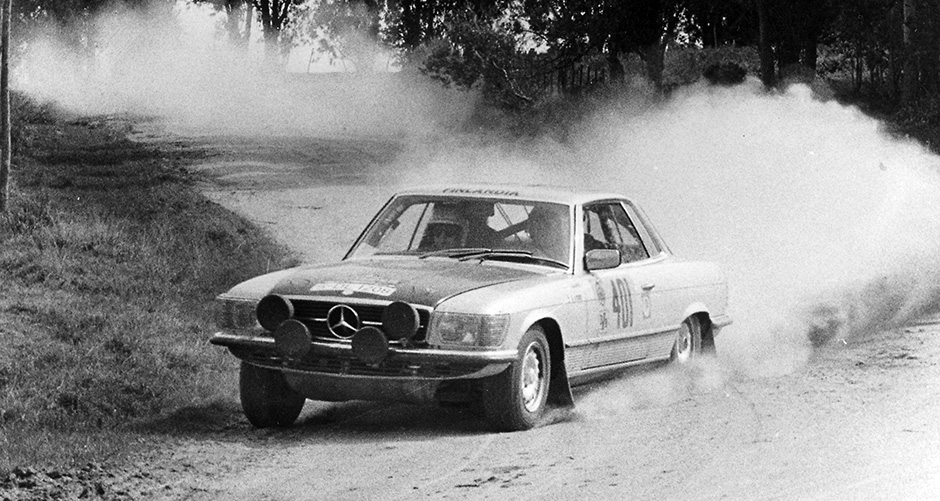 And yes, under the guidence of the Daimler’s Competiton Department the SLC became an unlikely rally winner.