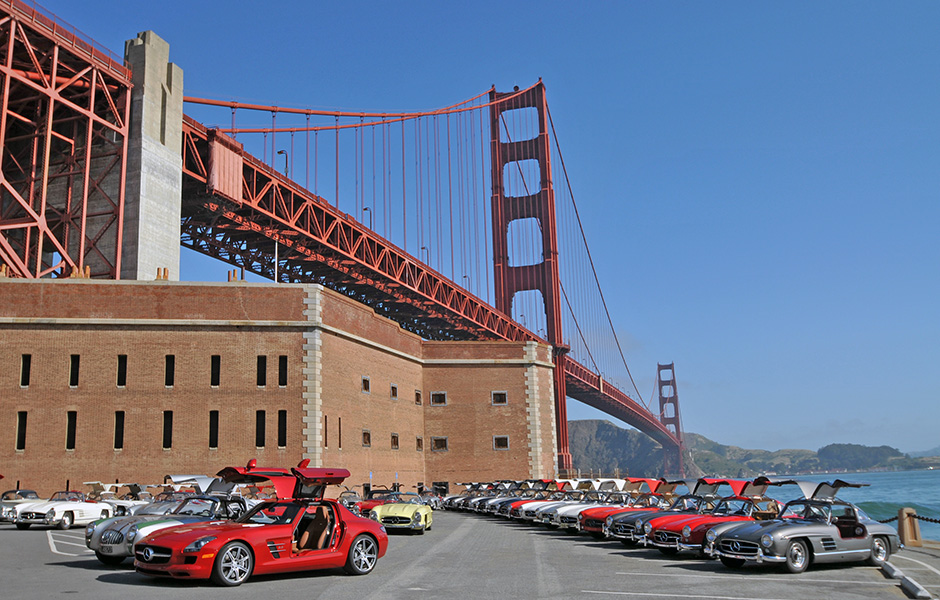 June 10, 2011 was the day earmarked by the Gullwing Group to celebrate the Club’s 50th anniversary. Returning to Fort Point at the foot of the GG Bridge to reprise an image taken at the same spot on May 6, 1961 was spectacularly successful. The fog parted just in time for the glorious images.

With just 613 members, the Gullwing Group is one of the smaller classic car clubs in the United States. However, sales of 300SL Gullwings and Roadsters exert a powerful influence over the entire classic car market and are often indicators of the overall health of the market. Due to their enormous values ($500k – $1m+), Gullwings and Roadsters loom large over the entire market. This series of cars (W198) have become ‘must own’ acquistitions for collectors and reside in many of the world’s most sophisticated collections.

In 1961 a young man named Ernie Spitzer saw far beyond the immediate low values and creeping obsolescence of his Gullwing and decided to create a small club dedicated to preserving the Gullwing legacy and knowledge base. He and seventeen fellow Gullwing owners formed the Gullwing Group on June 16, 1961. In May of that year the fledgling GWG shot a group picture at the unpaved parking lot at Fort Point at the southern base of the Golden Gate Bridge. 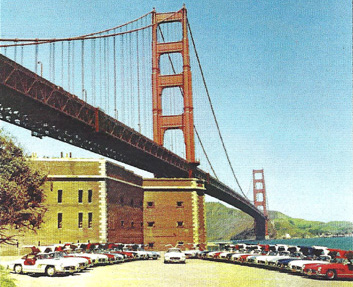 May 6, 1961: The fledgling Gullwing Group stages its first portrait at the base of the Golden Gate Bridge. Roadsters would eventually join the club. Average value of a Gullwing when this image was taken? About $3,900.

Back to the Bridge

The club’s plan to duplicate the original Fort Point shot 50 years on resulted in another wonderful picture and one that contrasts the original by including roadsters in the mix. 29 Gullwings, 12 Roadsters, two SLSs, a spectacular 1952 300SL re-creation and a beautifully done Rennsport Transporter re-creation were present under spectacular clear skies June 10.

Where have Gullwing (and Roadster) values gone over the last fifty years? In a word, up! Spectacularly so. A quick calculation of the value of the original 29 Gullwings present at the first gathering computes to about $102,000. The same calculation of the 29 present June 10, 2011 brings the value to…$18,850,000. 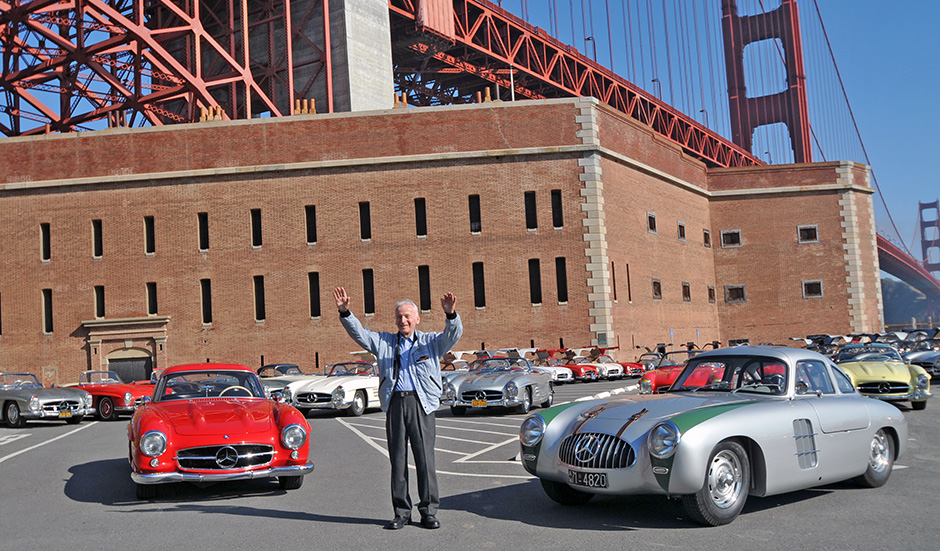 50 years on, club founder Ernie Spitzer is still an active figure in the club. Spitzer sold his ‘best of the breed’ Gullwing last year. W194 re-creation is at right.

The GWG anniversary also marked the debut of two extraordinary renderings of Mercedes-Benz racing history. Front and center during the gathering was the gorgeous 194R Silver Arrow painstakingly created over the last 5 years under the guidance of Peter Thomas. This cost-no-object project is a mind boggling tool room copy of the father of the Gullwing, the W194 300SL created in the early ’50s. June 10, 2011 was the car’s world debut and those who looked closely at the details were floored by the fabrication quality and attention to accuracy. 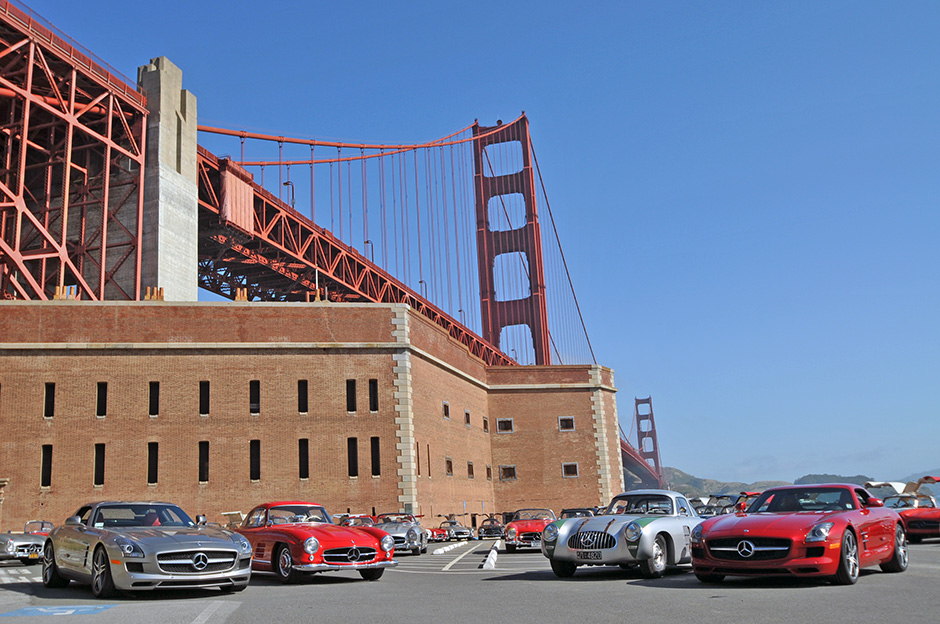 June 10, 2011 was the day earmarked by the Gullwing Group to celebrate the Club’s 50th anniversary. Returning to Fort Point at the foot of the GG Bridge to reprise an image taken at the same spot on May 6, 1962 was spectacularly successful. The fog parted just in time for these glorious images.

Rennsport Transporter
1 of 1 in private hands

Another surprise visitor to Fort Point on this day was the only Rennsport Transporter in private hands. Fans of Mercedes-Benz’ racing dominance in the mid ’50s will remember the 300SL engined high speed single car racing transporter. Constructed to facilitate high speed trips between the factory and Europe’s racing circuits the unusually proportioned truck became symbolic of the teams clinical precision. 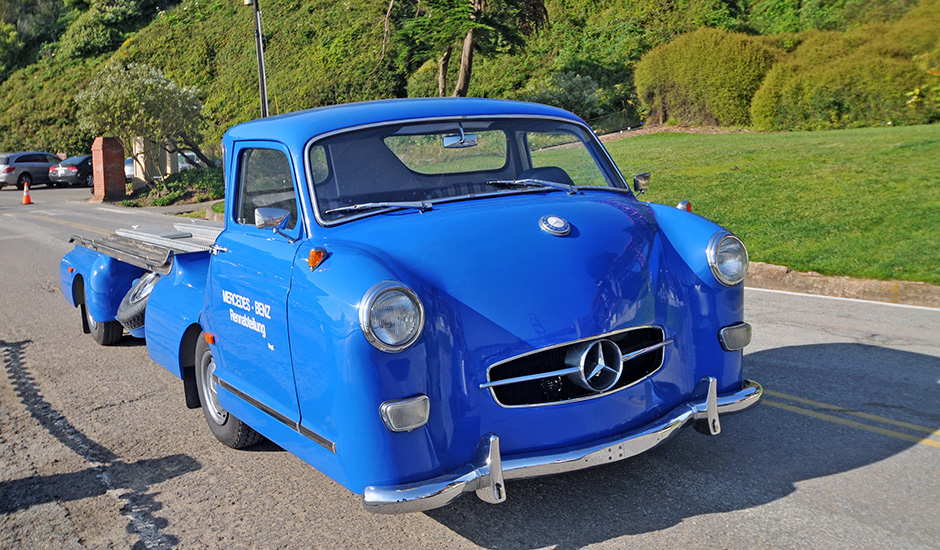 For students of Mercedes-Benz Grand Prix racing history, the sight of the transporter re-creation was a vivid reminder of the exploits of Moss, Fangio and Lang during the 1954/1955 Grand Prix seasons. This transporter is the only example in existence aside from the Factory’s replica.

Having become an outdated relic from the ’50s the bright blue transporter was crushed by the factory in the late 1967, a move Mercedes-Benz would soon regret. As corporate awareness of the marketing potential associated with the growing number of classic car events grew, Mercedes-Benz realized the discarded Transporter would have been a spectacular PR ambassador. With one of the 1955 Grand Prix cars on its back, the Renntransporter would be the focal point of any vintage gathering.

According to the current owner Mercedes commissioned a replacement to be constructed by a fabricator in Sweden in the early ’90s but cancelled the contract fairly soon after work had begun. MIKA GmbH in northern Germany ultimately received the commission to construct a ‘new’ transporter and the result is the truck Mercedes-Benz Classic displays at vintage events today. However, the Swedish constructor continued to build the originally commissioned truck, finishing it after 14 years of hard labor. This is the truck you see above. This amazing symbol of Mercedes-Benz Grand Prix dominance is available for sale and can be inspected at our facility in Burlingame. Feel free to contact me for more details.

The group adjourned at 9am for a quick trip over the Golden Gate Bridge then back to SF for a slow tour down the twisty bit of Lombard street under flawless blue skies.

The Gullwing is certainly alive and doing well thanks in no small part to the efforts of the Gullwing Group. While organizing tours and events to bring the cars out of garages, the Group has also archived a massive amount of technical information and offers many replacement parts for the 198 series. If you’re a Gullwing or Roadster owner without a membership, join the club. If you’re passionate about these cars but don’t own one, you’re welcome as an associate member. Visit the Gullwing Group International for more information. 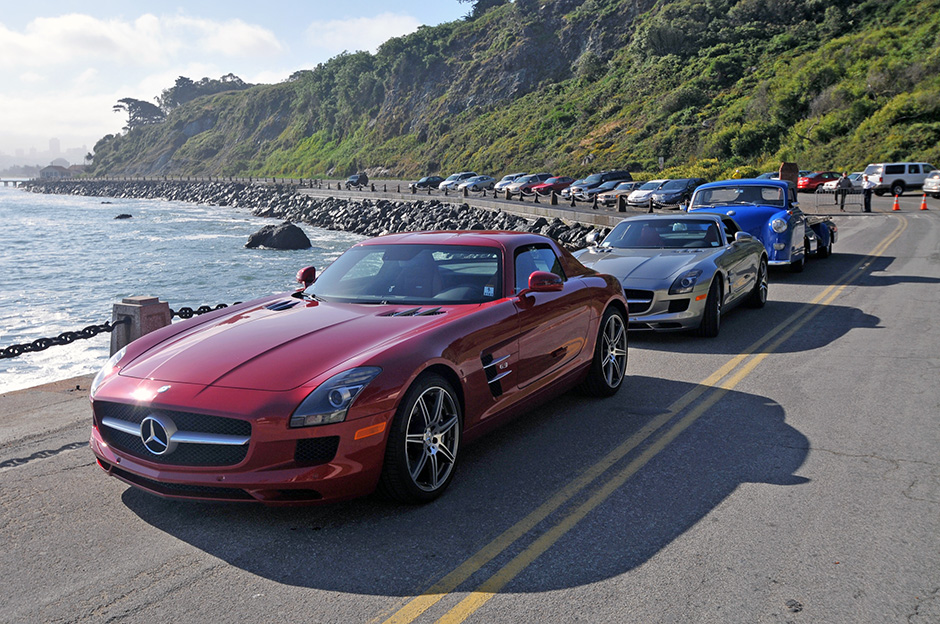 Two new SLS gullwings and the zany Renntransport joined the group as well. A new SLS costs twice the combined value of the original 29 Gullwings photographed in 1961!