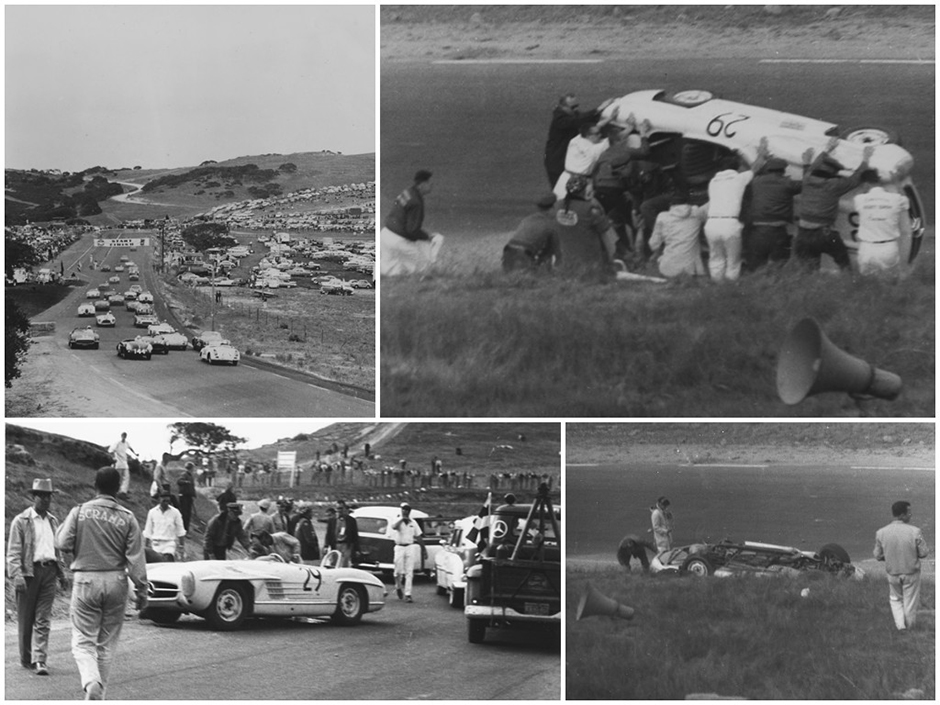 Despite the harrowing roll over, the roadster seems to have survived fairly intact. According to driver Geldert Brown’s son Jeffrey, “that was my father in that crash and although pronounced dead at the scene he was brought back to life after they realized he had swallowed his tongue. He had leg injuries too but eventually fully recovered. He loved that roadster.” Amazing.

When introduced in 1954, the 300SL was the result of Mercedes-Benz’ effort to tame the LeMans winning 1952 W194 300SL and offer it as a super car for the street. As soon as new 300SLs reached their excited owners, many were immediately modified and taken to local tracks to compete.

The mid to late ’50s were the formative years for the American road racing scene and events such as the Pebble Beach Road races always featured Gullwings roaring through the Del Monte Forrest chasing Allards and Ferraris.

The Pebble Beach road races came to an end on a grim Sunday afternoon in April 1956 when popular road racer Ernie McAfee lost control of his Ferrari 121 LM and hit a tree squarely at the drivers compartment. McAfee’s death was the catalyst for the search for a safer venue elsewhere on the Monterey Peninsula. That new venue was found within the expansive Fort Ord properties adjacent to highway 68 in Monterey and the glorious Laguna Seca Raceway was created in 1957.

However, as this photo essay discovered while curating our MotorBinder project demonstrates, there were still perils to be faced when two cars attempted to occupy the same track space. This early race calamity during the Laguna’s November 1958 event claimed four or five cars and caused no fewer than 3 rollovers. Included in the fracas was the 300SL roadster of Geldert Brown. Where is this roadster today? Does its current owner know about Brown’s close call?

The winner that day of the big bore event? It was Lance Reventlow son of the F.W. Woolworth heiress, Barbara Hutton, in his new Scarab. We see him in the left image ready to take a victory lap with girlfriend and actress Jill St. John.