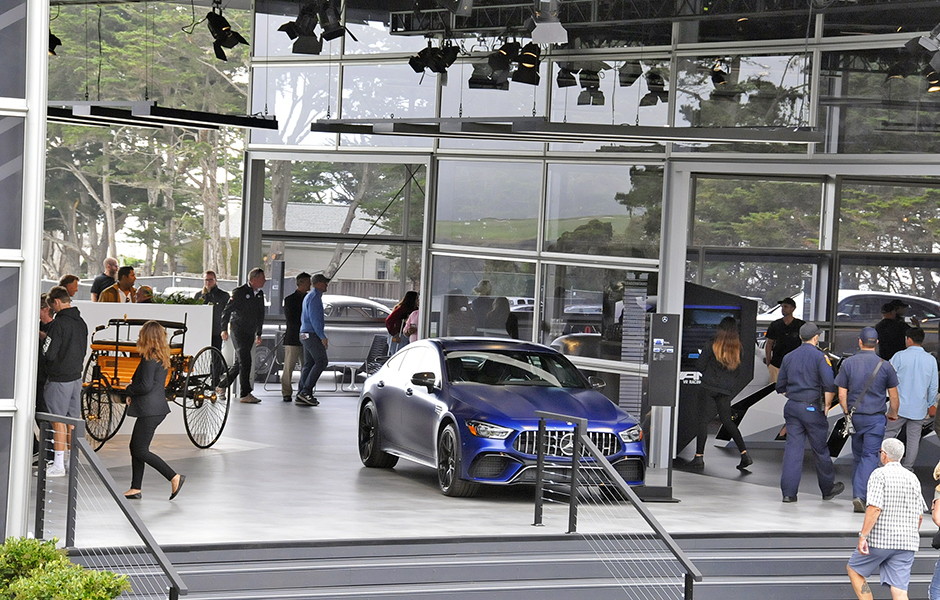 The Mercedes-Benz Classic Center treated those who visited their expansive Star Lounge during the Monterey Car week last month to an extraordinary display. The arc of their motor sports success over the last 125 years was on full view via a group very special racing cars.

Racing success for Mercedes began with the Paris-Rouen race in July 1894, an event conceived to demonstrate the durability this dubious recent contraption called the ‘automobile’. Cars produced by Peugeot and Panhard & Levassor and fitted with Daimler designed 3.75 HP V twin engines won first prize in the event.

And these French cars repeated their success in June 1895 during the Paris to Bordeaux and back to Paris event, the globe’s first timed automobile competition event. The evolution of the motor racing car could be vividly traced as visitors wandered from car to car. Each represented the peak of motor racing technology of its era.

The Indy establishment was stunned by Penske and Mercedes’ shrewd use of Indy’s rule book. 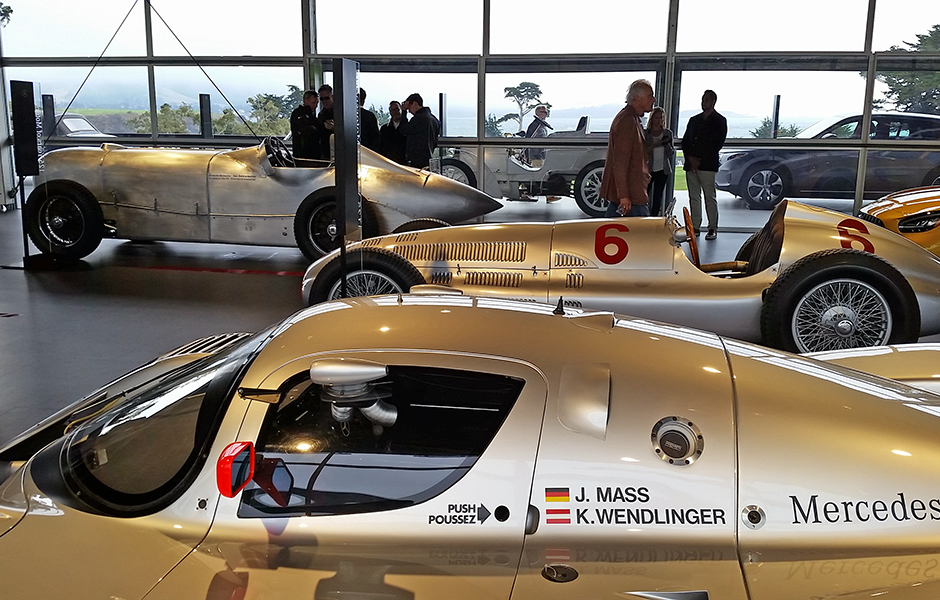 The Classic Center curated a stunning tribute to MB’s 125 years of involvement in the highest levels of motor racing. Even the most jaded racing enthusiast couldn’t help but be impressed.

Being able to carefully inspect the 3 litre 475 HP W154 Grand Prix car was rare treat, particularly because the Classic Center cleverly cut away much of the coachwork on one side. This car dominated the final two years of Grand Prix racing before the dark veil of WW 2 fell over Europe.

The W154 won the 1938 European Championship with Rudi Caracciola at the wheel and the 1939 title with Hermann Lang driving. It was end of the era for these F1 ‘Titans’. The intricate workmanship and complication of the W154 was fascinating. 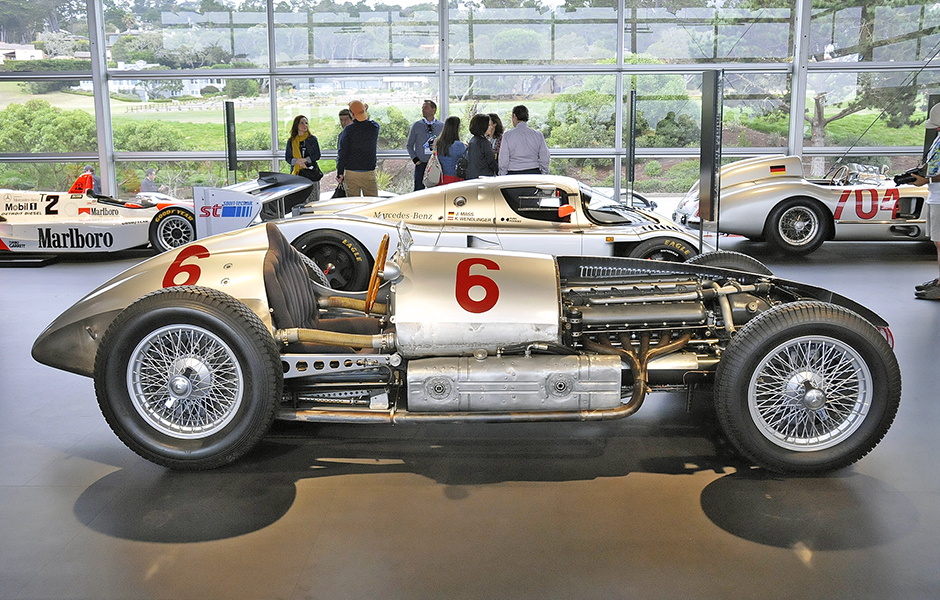 The placard adjacent to the Marlboro liveried Penske-Mercedes PC-23 noted a ‘loophole’ in the Indy regulations that Roger Penske took advantage of. In fact, this loophole was unique to Indy, the only race on the 1994 schedule that followed USAC regulations.

The Indy establishment was stunned by Penske and Mercedes’ shrewd use of Indy’s rule book. The car was one race wonder and never run again. What a treat to see this 1,000 HP rocket up close. 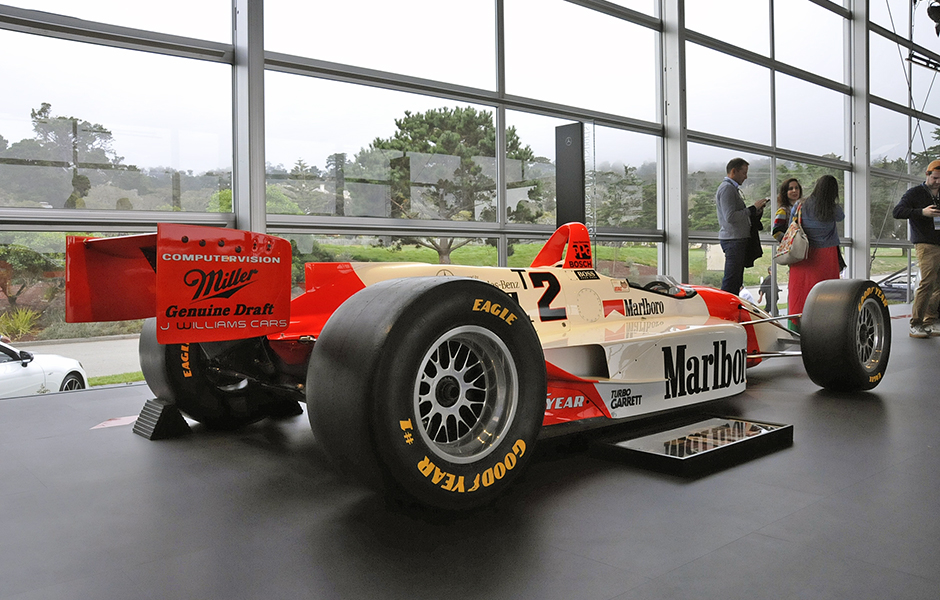 One race wonder. The canny Roger Penske utilized a USAC rule that favored push rod engines (209.3 cid vs. 161.7 cid and 10 lbs additional turbo boost) over the 4-overhead cam engines of the day. His PC-23 produced about 200 HP more than the then current Indy cars. Al Unser was approaching almost 250 MPH on Indy’s back straight during his dominant 1994 race.

In addition to the Silver Star’s open wheel successes, which of course continue today with their dominance of the F1 scene, Mercedes’ decades of sports car racing success is a massive component of their racing past as well. The Classic Center treated us to two legendary sports cars, the fabled 1955 300SLR and it’s 1989 sports car brother, the bellowing Sauber Mercedes C9.

Star Lounge visitors could revel in the 300SLR’s design intricacies: the outside lace wire wheels, the intricate gated push button shift mechanism, and of course the side exhaust extractors that produce such a deafening racket under power. Detectives of this era know that this is not THE 300SLR – Stirling Moss and Denis Jenkinson drove number 722 to an epic victory in the 1955 Mille Miglia – but it was a sight to behold. And it would certainly be one of the most valuable automobiles in the world if it ever came to market.

Thank you Mercedes Classic for treating us to a stunning glimpse of your motor racing past. For more images from the Star Lounge, be sure to scroll the gallery at the bottom of the page. 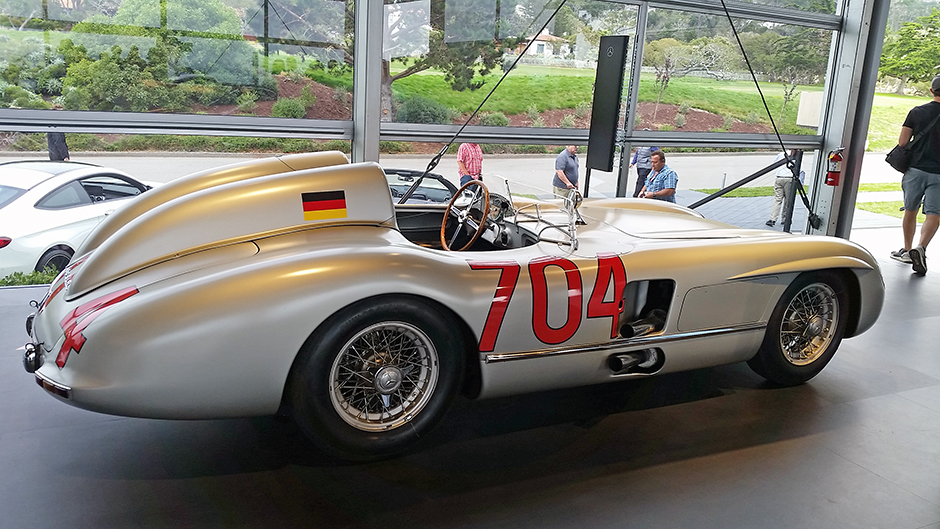 1955 Mille Miglia competitors were numbered according to their starting time on the day of the event. Hence this 300SLR rolled of the starting ramp at 7:04 AM. Note outside lace wire wheels, enormous side pipes and twin headrests. Dominating sports car racing in 1955 required but 302 HP. 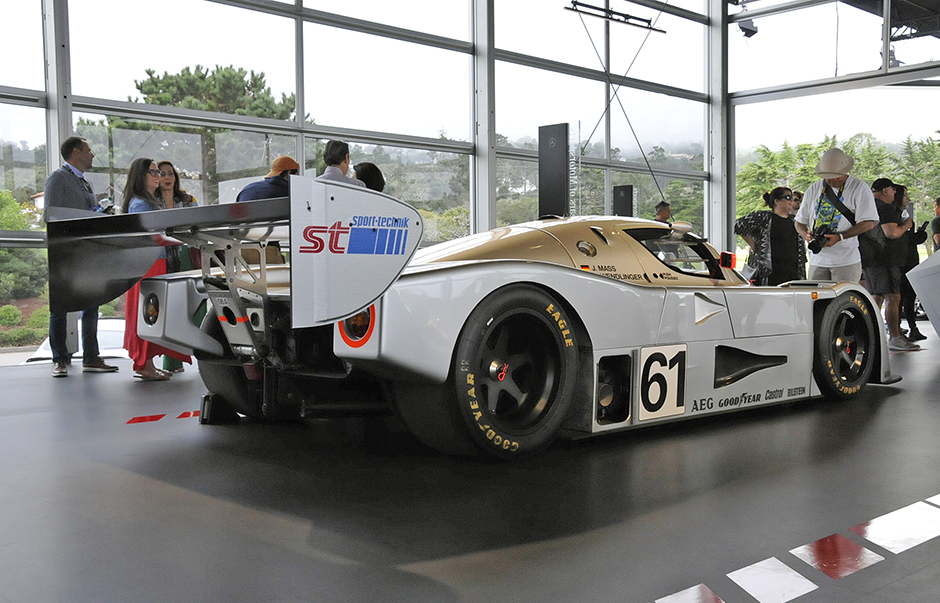 Staying on top of sports car racing in 1989 required 720 HP. The bellowing Sauber Mercedes C9 is powered by a 5 litre twin-turbo Mercedes V8. Wins at Le Mans in 1989 and successive World Championships in 1989/1990 secured this car’s position in MB’s 125 year motor sport history.