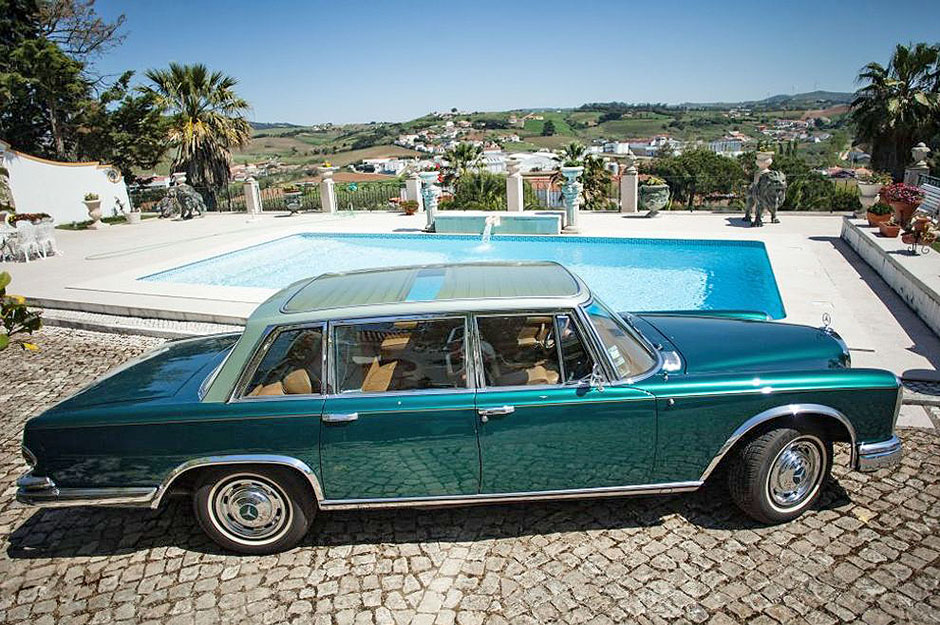 In creating the mighty 600 long and short wheelbase sedans in 1963, Mercedes-Benz must have felt that they had created an automobile that addressed every possible desire of their most discerning and wealthy clients. With hydraulic seat, sunroof and window operation, self leveling air suspension and automatic door/trunk closure, the imposing Grosser Mercedes surely would satisfy any buyer’s demands.

However, when Londoner Mr. Nubar Sarkis Gulbenkian, a massively wealthy oilman of Armenian decent, decided he wanted a new 1966 600 to sit at his summer home near Cannes, he was slightly underwhelmed with the car presence. You see, Mr. Gulbenkian’s wealth allowed a lifestyle defined by lavish eccentricity. A standard 600 would simply not do. 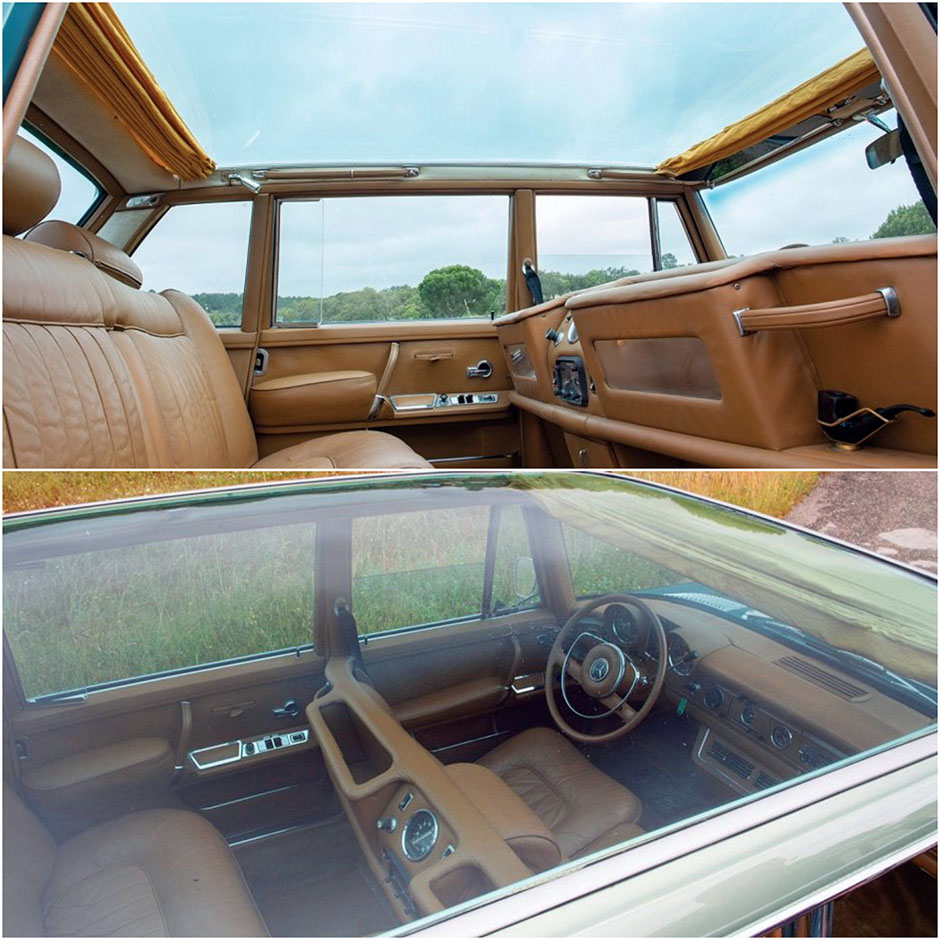 Light and airy. Lore has it that the eccentric playboy Gulbenkian would lie down in the fold out back seat of his modified 600 and gaze at the stars nestled next to has latest conquest. Contrary to the 600’s original specification, you won’t see one square inch of wood in this special 600. Those surfaces were covered in leather and with the color coordinated leather covered steering wheel contribute to the monochromatic environment.

After receiving a firm ‘Nein’ from Mercedes when he requested an entirely glass roof and other hedonistic mods to be carried out on a new 1966 600, he ordered this new 600 from a French dealer under an assumed name. French coachbuilder Henri Chapron, a firm well known for converting Citroens into gorgeous convertibles, was happy to fulfill his extensive wish list without compunction.

And what a list it was: Mr. Gulbenkian’s 600 would not only be fitted with a massive fixed glass roof insert, the interior would be entirely reconfigured to incorporate redesigned front seats, a split back seat that folded down into a bed, additional gauges and storage for rear passengers. All the wood was either removed or simply recovered in leather and a two piece sliding leather sun shade was installed. 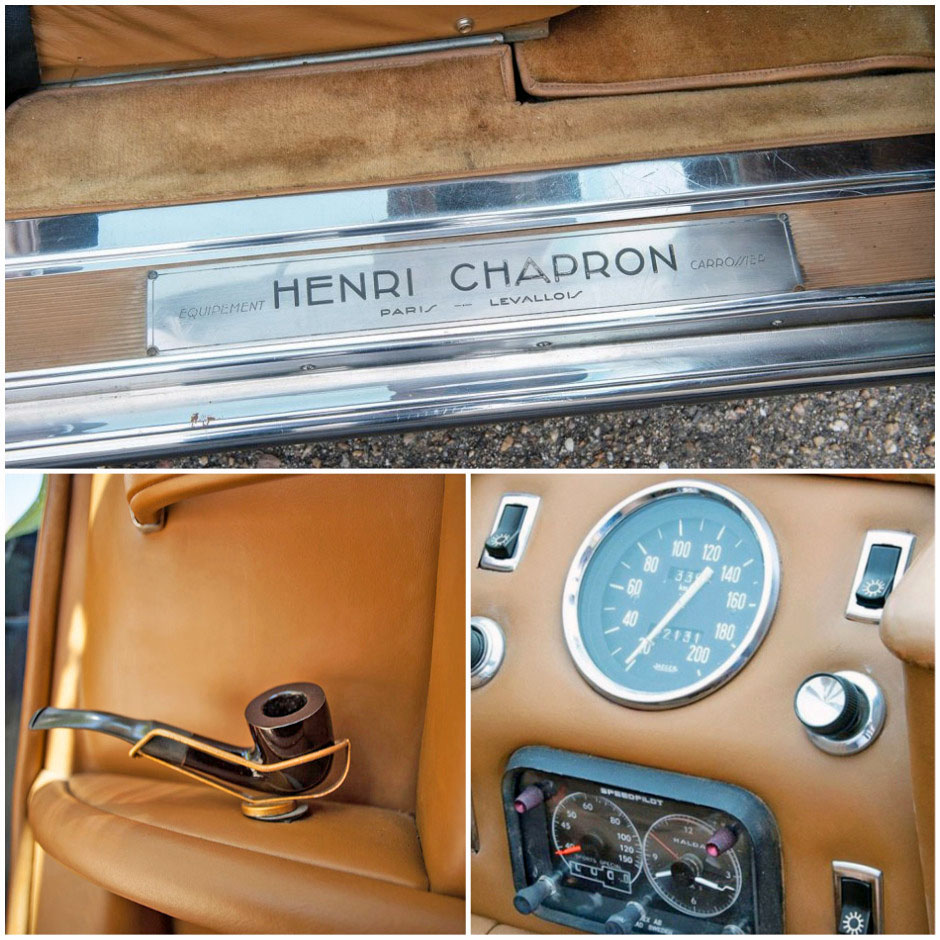 After Mercedes-Benz turned down Mr. Gulbenkian’s request for a glass roofed 600 SWB, he secretly ordered a 1966 model in Paris and shipped the car to Henri Chapron for extensive modifications. Always wary of his chauffeur’s driving excesses, Gulbenkian monitored his habits via a rear mounted speedometer and Halda Speed Pilot.

The Chapron makeover consumed 100,000 DM which combined with the initial 600 SWB cost of 82,000 DM resulted in one very pricey 600. Quirky details of the final product include a discreet pipe holder and a sleeve carefully sewn into the left rear door panel into which fit a small mirror. Seems the fastidious Mr. Gulbenkian tended his signature long beard regularly.

Emblematic of this man’s eccentricity – and generosity – is the fact that he willed the car to his loyal Portugese gardner at the Cannes residence. Rather than simply turning the car into cash, the gardener imported the car to Portugal where it sat in storage for 30 years until José Mira, a prominent collector in Portugal acquired it.

If you’d fancy having this one-off 600 in your garage, you’re in luck. The car is being offered by RM/Sotheby’s in their upcoming SARAGGA COLLECTION sale September 20-21 in Comporta, Portugal. The pre-sale estimate of 300k-400k Euros attaches an approximate five-fold value ad for Mr. Gulbenkian’s eccentric tastes. I’ll report back in an upcoming newsletter how this bespoke 600 fares in Portugal. 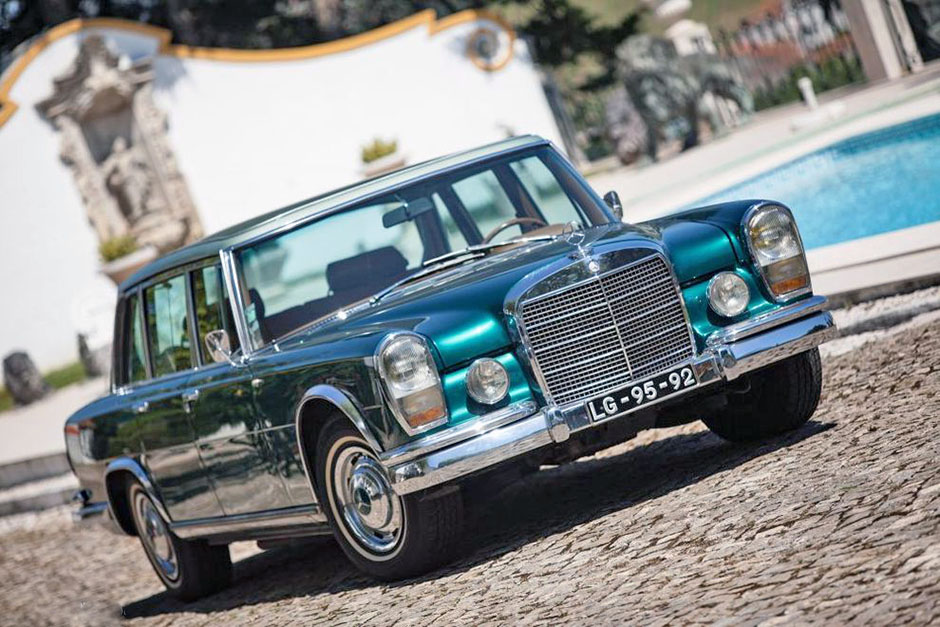 All looks fairly standard from this view adjacent to Jose Mira’s swimming pool in Portugal. The most recent owner Mr. Sarraga acquired the car from Mr. Mira earlier in the year. And what about that color! The factory data plate on the core support curiously lacks any color codes.