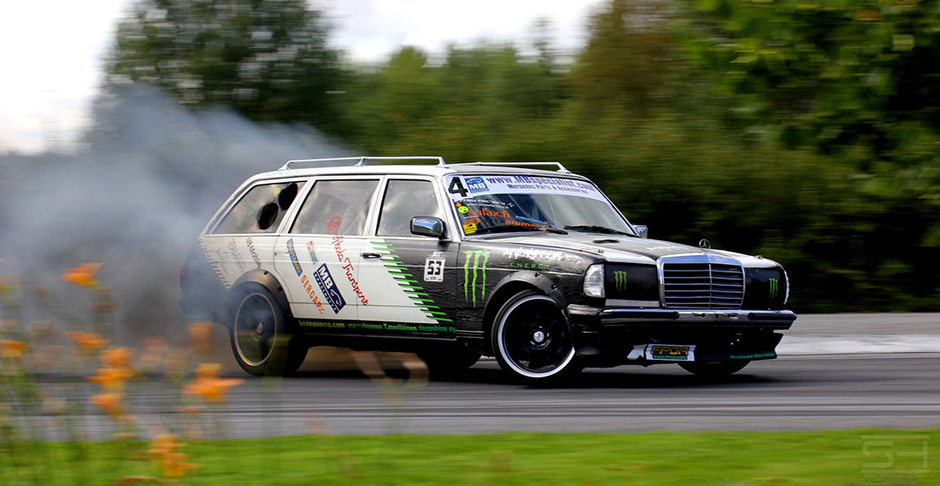 Diabolical Diesel
Sideways in a 123 Wagon

When Finnish drifting nut Teemu Peltola decided to build himself a proper machine to fling around with tires ablaze at local drifting events, he settled upon perhaps the most unlikely drift candidate on earth, a 1981 300TD wagon. Why not use the drifter’s tool of choice and go for a turbocharged Toyota Supra or a hopped up RX7? Selecting one of these rice rockets would have been far too predictable for this Fin.

Instead he chose…a 1981 300TD. “My last memory of such a car was being dropped off to school in the late 1980’s by my mother, who had a 1983 example.” Evidently the old diesel made quite an impression on young Teemu. Of course the TD’s anemic 125 hp would never do for a drifter so Teemu and his pals set out to create the TD from Hell.

After a full dis-assembly, the boys replaced the the original non-turbo straight five with a hopped up 3.0 liter 4-valve turbo diesel from a 1998 E-Class. They added a massive GT40 Turbo off a semi truck mated to a 6-speed transmission. While it’s never been on a dyno, Peltola figures it develops about 450 hp and maybe 500+ ft/lbs of torque. After watching the videos of him relentlessly boiling the rear tires , we can’t argue.

The diesel wagon’s feeble driveline had to go into the bin and was replaced by a rear axle sourced from a Mazda RX8 and fitted with coil over springs. The MB’s front suspension was tossed in favor of components sourced from a Toyota Aristo. He threw in some Volvo steering bits, a roll cage and jettisoned most of the interior trim.

And so a drifter crowd favorite was born. Teemo’s antics hurling the Frankenstein wagon around drift courses eventually earned him some Monster Energy drink sponsorship. His creation is now known as the Black Smoke TD wagon. Drift on Teemo! 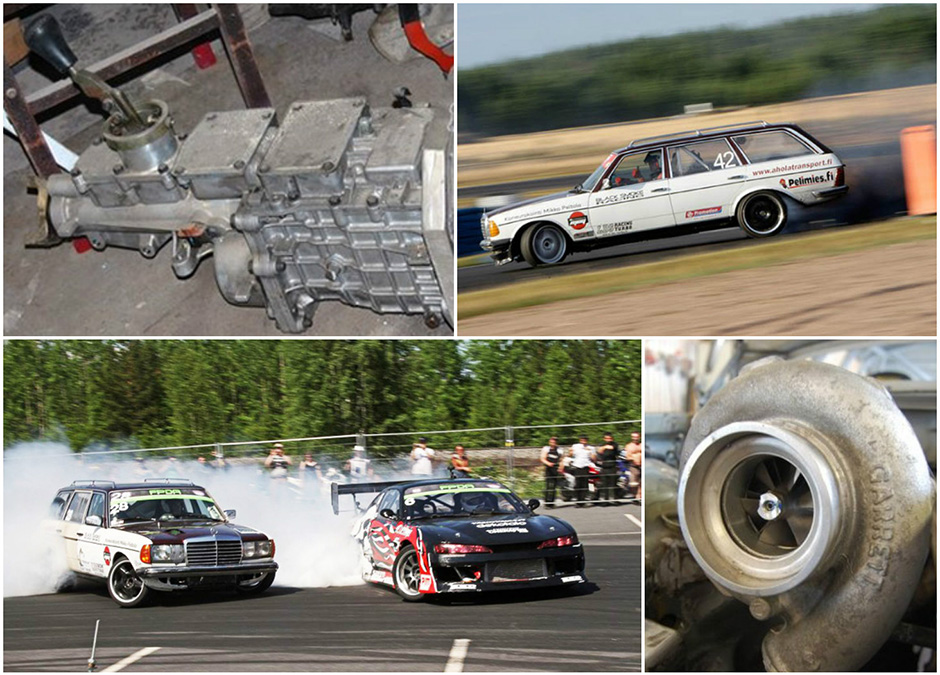