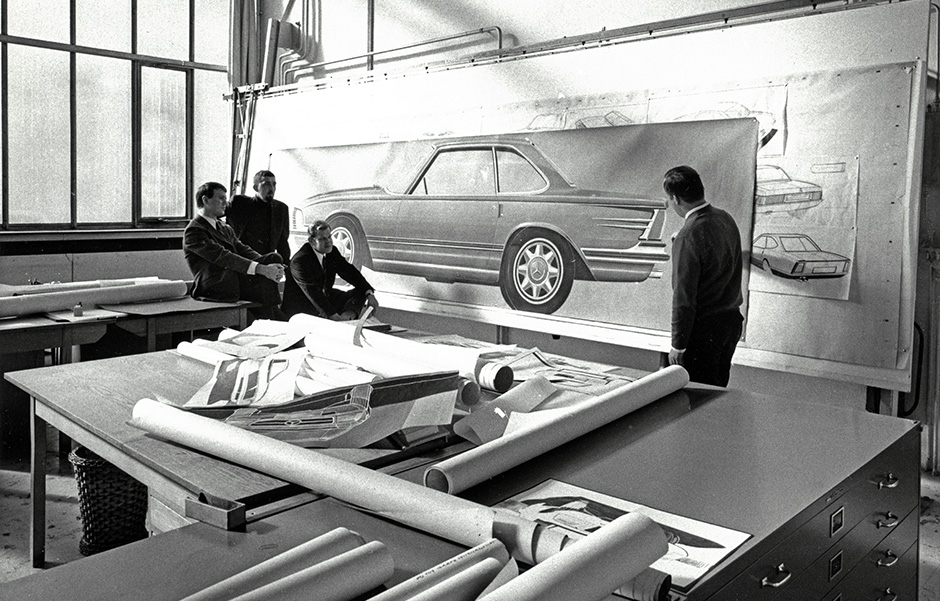 Designing an Icon
Focus on the 107

From a designer’s standpoint, the satisfaction of a successful automobile design is always tempered by the looming challenge of improving on it. There is the relentless reality of the “design cycle” that requires all great shapes to be set aside in favor of a fresh expression of automotive styling chic. At Mercedes-Benz during the ’50s and ’60s the cycle seemed to be around 7-8 years, hence in 1967 MB stylists took on the task of replacing the lovely Pagoda 280SL.

“Automobile Year noted the new 350SL to be “the perfect sports car for the ‘70s” and also “not in the least bit an exciting car.” 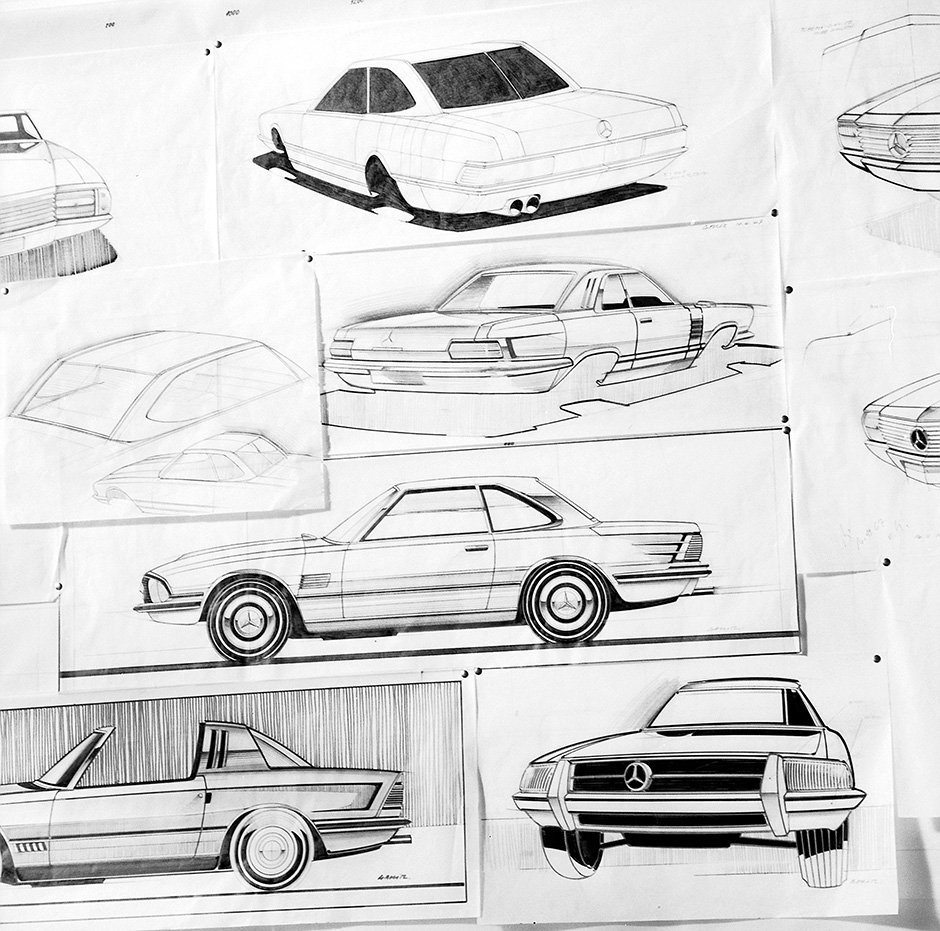 Pondering the future of the SL. The renderings reveal the evolution of a design. What would the buyer in the ’70s want in an SL? Thankfully the overly contrived upper design was overlooked. We see a targa proposal lower right. What design would appeal to an SL buyer’s tastes in 4 years?

Some firms simply won’t let go of an iconic design. Witness Jaguar stubbornly clinging to the core elements of the their faultless 1968 XJ6 design until 2009. The Coventry concern was shackled to a single design for 41 years.

Mercedes-Benz has typically never fallen too deeply in love with a particular design. When the charming, crisply designed 113 series SL was up for renewal, MB design chief, Karl Wilfert and his associates pondered the design direction of a car that defined the firm’s sporting image – their “halo” model in today’s branding parlance. Based on some of the renderings from the late ’60s, it could have gone seriously awry.

Still rooted in the Pagoda design ethos from the leading edge of the doors back. But we see traces of the 107 nose elements emerging in this June 1968 proposal. Do we see Pininfarina influences here?

Wilfert’s team could not work entirely within the vacuum of their own creativity. Burgeoning safety regulations combined with tightening emissions demands forced their creative hands. The US market loomed large with our appetite for luxury and comfort accessories. The lean profile and lightness of the 113 would necessarily give way to a heavier and less agile 107. Wilfert’s boys were charged only with clothing the new car within the constraints the technical team. How did they do?

Upon the 1971 350SL’s release to the motoring world, Automobile Year noted, “the perfect sports car for the ‘70s” and also – certainly to Mercedes-Benz’ dismay – “not in the least bit an exciting car.” Ouch. Road & Track noted “the bulbous sides of the new 350SL don’t please us…and the low lip of the rear wheel arch only adds to an Americanized, anti-agile appearance.”

R&T also noted “exterior detailing is heavy but tasteful throughout” and closed with “all in all, the 350SL is clean and contemporary, with an aggressive, substantial look at the expense of crispness and agility.” Mixed reviews for sure. Mercedes had the last laugh, however, and constructed 287,237 107 series SLs over the ensuing 18 years. Validation indeed for a moderately quick, comfortable and exceedingly well constructed roadster.

Where does the 107 stand in the collector car community in late 2014? We just shipped a perfect 1984 European specification 500SL to a client in New York. The arctic white SL now rests within a collection that in addition to other cars includes: 1962 Ferrari 250 SWB, Ferrari 275 GTB, 300SL gullwing and roadster, Porsche 959 and Carrera GT and a 1956 Maserati 200S. Well deserved respect at last for the 107. 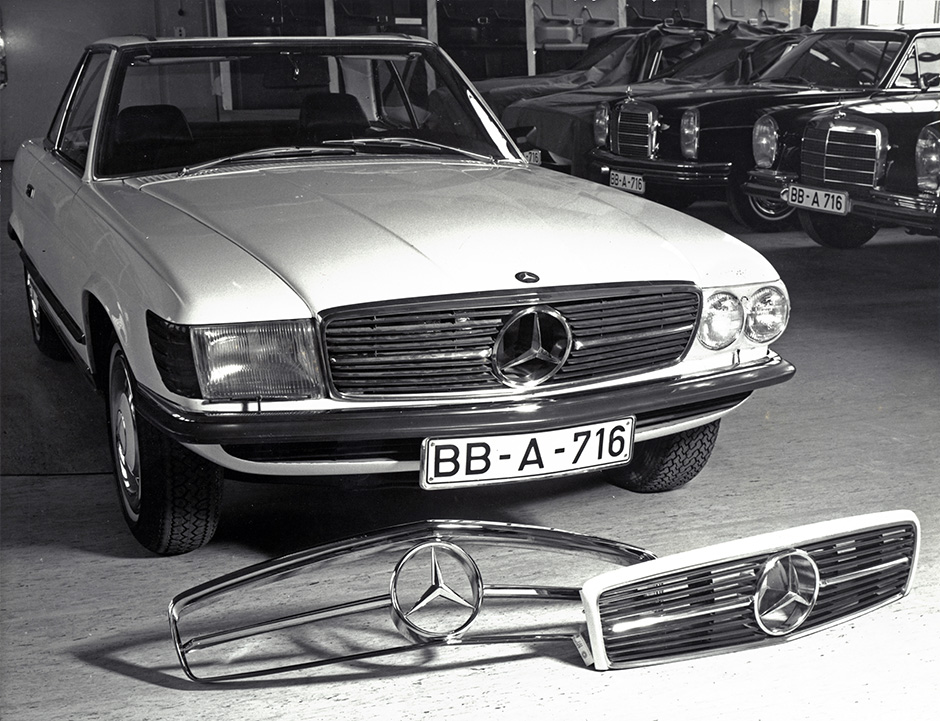 Almost there: Note the flush door handle, lack of “fluted” lower side body contours and US vs Euro headlamp treatment. The hard top is still a 113 design and the grille evolution is amply demonstrated. Note an early “low-grille” 111 coupe/cabrio in the back ground next to a 114/115 model. 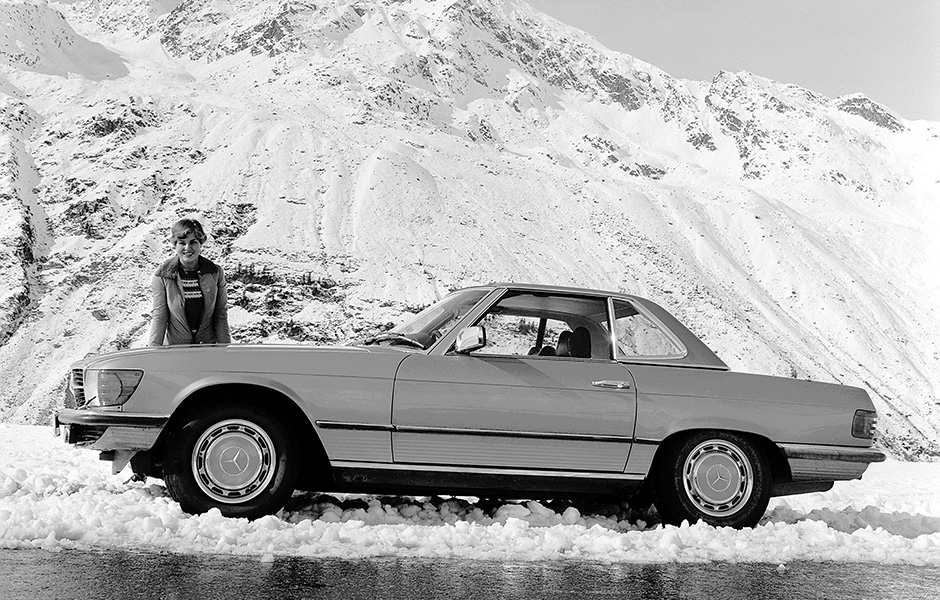 Success! The Pagoda’s successor plays in the snow. Yes, it was an SL interpreted with a slightly heavier hand than the 113 Pagoda but nevertheless it endured for a full 18 years. The clean, sober design underpinned by a largely bulletproof drive train is in demand today and good examples are on the rise.