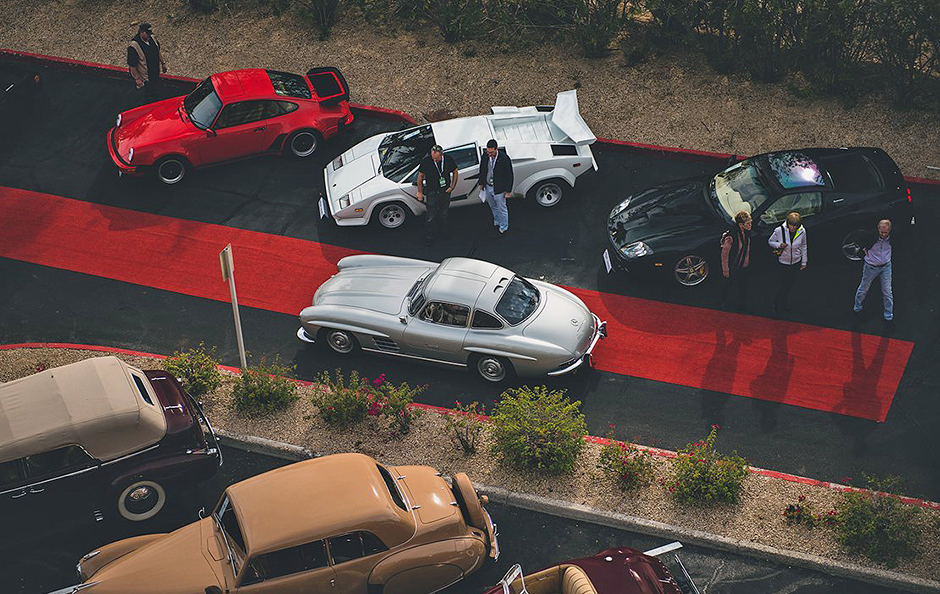 RM SOTHEBY’S  was not immune from the general year over year sales declines in Scottsdale, generating a total of $30.4m against their 2019 total of $37m. Like last year they failed to sell their ‘homerun’ car, a 1958 Ferrari 250GT Cabriolet PF series 1 (Estimate $5m – $7m). However they sold six million dollar plus lots both this year and in 2019.

Among those million dollar cars was a lovely Rudge wheel Gullwing which generated $1.27m including the buyer’s premium. The unusual 1937 Mercedes 540K Coupe with Hebmuller coachwork was knocking on door of the million dollar club at $995k realized. Interestingly, all eight Mercedes-Benz’ offered sold. Let’s have a look at the results. All sales figures include the buyer’s premium. My observations are based on images from RM SOTHEBY’S catalog as I did not attend the auction. However, both the 300Sc coupe and the silver 300SL Gulling are now sitting next door to me and I’ve had a look at each. 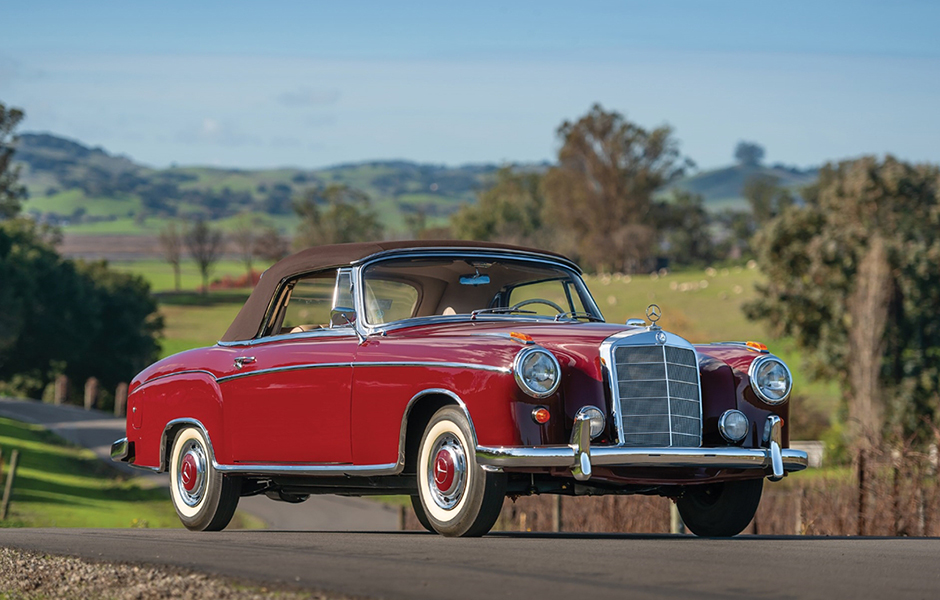 Lot 112: 1960 Mercedes 220SE Cabriolet, ID# 128.030.10.003553, Medium Red, Beige Leather, manuals, tools, fitted luggage, restored by the Mercedes-Benz Classic Center in 2009. Sold for $162K. As I reported my in Scottsdale Gooding & Co. review, the demand for pontons of any description has been declining for a decade or so. I was surprised with the $162k realized for this car until I learned that the Classic Center restored the car. This provenance, and the spotless current presentation immediately legitimized the car. Doing some loose math reveals the seller quite likely experienced a $100k+ haircut. A restorable 220SE Cabrio had to require $50k to acquire circa 2009 and the MBCC bill for the nut/bolt restoration had to exceed $200k. With only 900 miles accumulated since the restoration, this rich looking 220SE should provide its new owner with instant gratification. 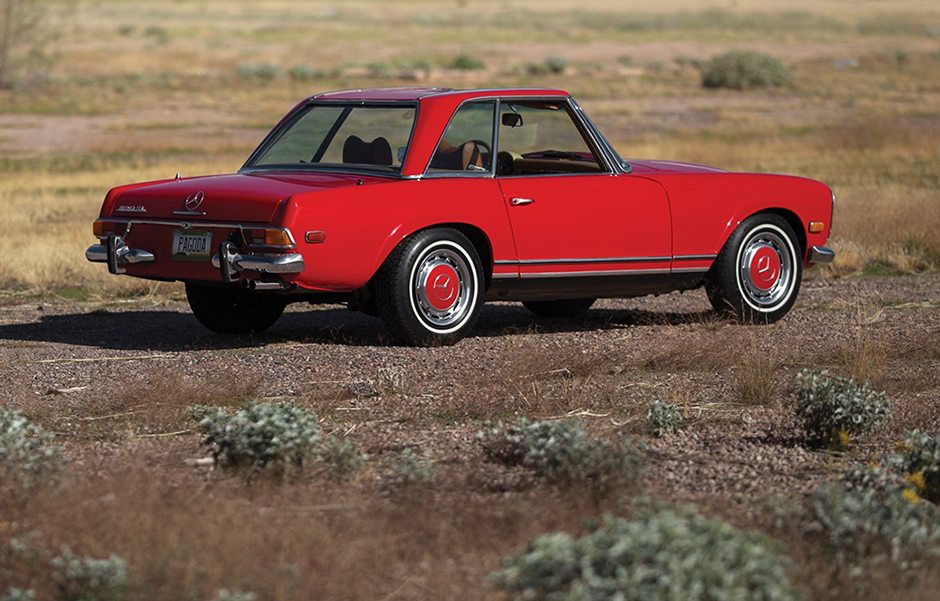 Lot 130: 1969 Mercedes 280SL, ID# 113044.12.014788, Red/Tan, Frigiking AC, automatic transmission, 70k miles indicated, recent transmission rebuild, aftermarket radio. Sold for $67.2k. Including a Pagoda of some sort in their sales seems obligatory for most of the big three auction houses. My observation would be why not find a proper example? RM Sotheby’s is a respected auction house whose name implies a certain level of confidence in the cars they offer. If a first time Pagoda buyer counted on that reputation when they won this particular auction, they will be sadly disappointed. That the auction house had generally nothing to say about the car in their description was revealing. This 280SL should have been rejected by RM after viewing a single exterior photograph. The plated brass horizontal side moldings normally mounted aft of the rear wheel arches that continue the line established between the wheel arches are missing. No big deal right? Not quite. It reveals an ignorance of the model and/or crude workmanship by the vendor(s) that patched this SL together at some time in its life. Omitting these side moldings is laughable. Looking into the crudely painted flat black engine bay and decoding paint code 906 reveals the car was originally grey blue metallic. Twin antennas on the tail, miserable driver’s side panel-to-panel, molding-to-molding alignment and a mishmash of materials/colors within the interior further betray this SL. Looking deeper will likely only reveal more disappointment. Yes, it was a fairly cheap Pagoda but this lot did nothing to enhance RM SOTHEBY’S reputation. 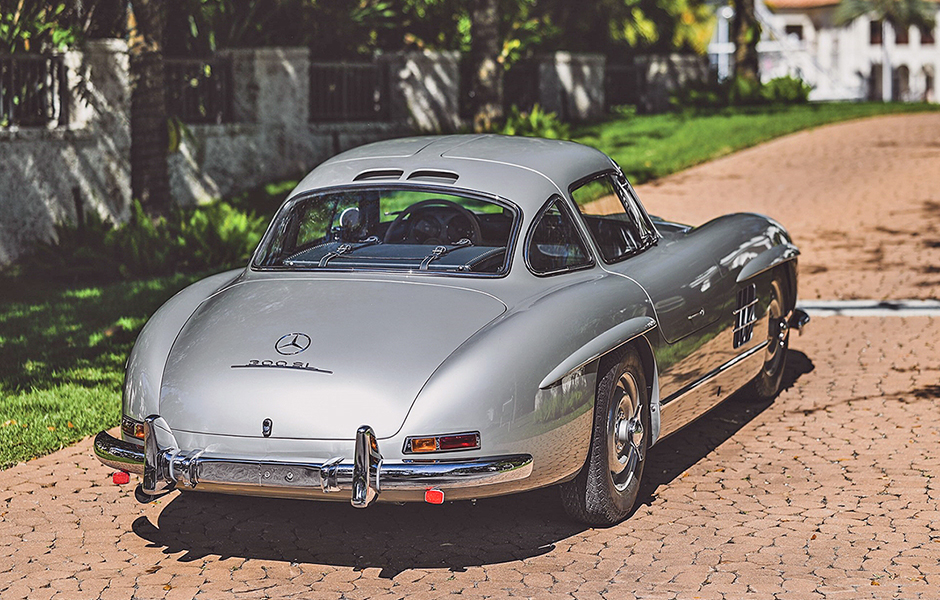 Lot 155: 1955 Mercedes 300SL Gullwing, ID# 198.040.5500594. Correct engine/gearbox, tools, fitted luggage, spare seats, color/trim changed from DB350 mid blau/grey. Sold for $1.27m. This Gullwing presents itself beautifully and the color/trim change to classic ‘silver arrow’ silver/blue plaid would not detract from the car’s value. Seems to be a well sorted, cosmetically attractive tour and event candidate. Panel fit and door gaps are generally good. Work by respected vendors Hjeltness Restoration, Ed Tatios, and Pollock Automotive Restoration had to give the buyer confidence as well.  The rear track seemed too wide, often an indicator of after market Rudge style wheels mounted on standard wheel brake drums. This car is now sitting on a rack at Burlingame Motors next door to me and I’ve just looked at it more carefully. The wheels are definitely aftermarket and bolted to splined hubs which are bolted to the standard wheel brake drums. This adds a few inches to the rear track giving the car a slightly awkward look from the rear. The value add for a car originally ordered with Rudge wheels is enormous – $100k+. I consider this very nicely sold for a non-original Rudge wheel car. 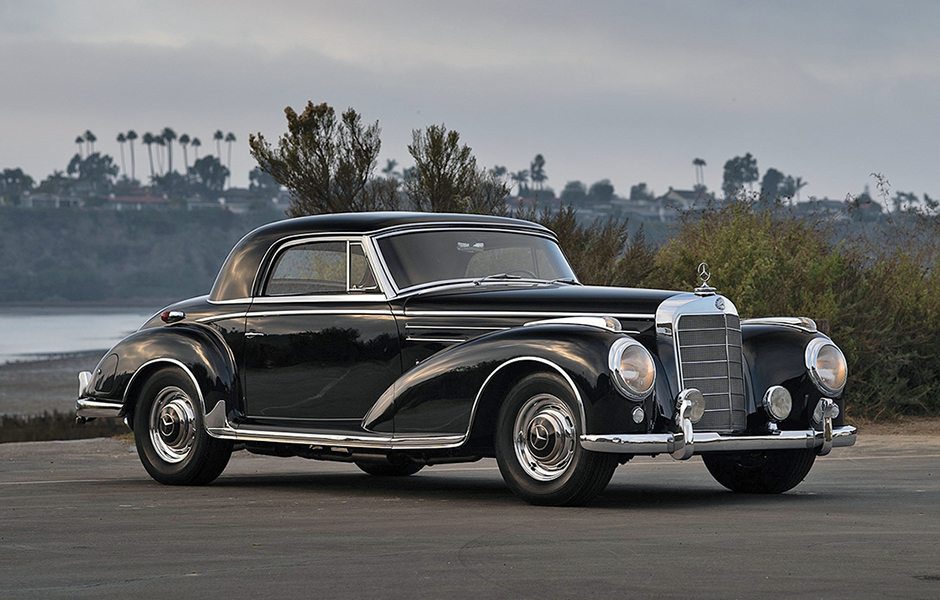 Lot 233: 1956 Mercedes 300Sc ‘Sunroof’ coupe, ID# 188.014.6500070, Black/Black, 1 of 98 300Sc coupes constructed, matching number engine, luggage, less than 25k KM showing, ultra rare Venti sunroof. Sold for $368k. I owned a 1952 300S coupe some years ago, also in black, and am a fan of these cars. Despite their pre-war design aesthetic, these 3 window coupes are gorgeous, supremely roomy and comfortable cars. My carburetored car produced 150 HP with a 7.8:1 compression while the Sc introduced in 1955 was fitted with fuel injection and produced 175 HP with a 8:55.1 compression ratio. A new 1953 300S sold in 1952 for a whopping $12,500. The Scs received extra chrome via chrome wheels/wheel arch moldings and horizontal moldings on each side of the hood but lost the bumper impact rubber of the 300S models. These were exclusive and extravagant cars in their day with only 760 300S/Sc coupe/roadster/cabrios constructed from 1951 to 1958. This Sc was color changed in the early’00s from its original graphite grey/grey leather to black/black. Based on its extensive history of being in storage, the 25,750 KM (16k miles) is generally believed to be correct. If fact the car is also being freshened up at Burlingame Motors next door to me at the moment. Gorgeous car and now running properly after a comprehensive fuel tank/fuel injector cleaning. My Mercedes 188 series detectives think the $368k paid was well above market. Exceptional money for an exceptional car. 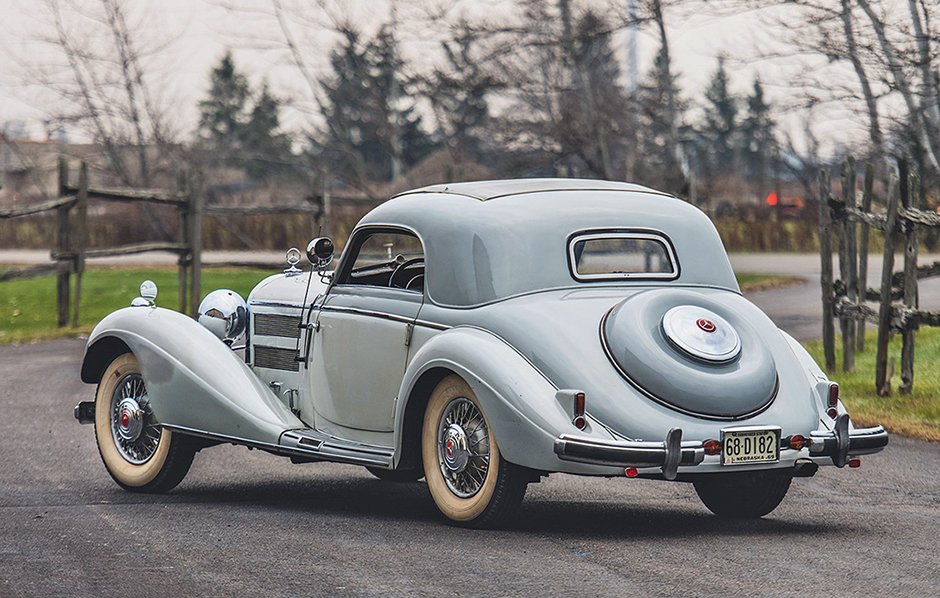 Lot 234: 1937 Mercedes 540K Coupe by Hebmuller, ID 154143, original engine/chassis, 50 year recent ownership, garage find, originally delivered as a Cabriolet A, converted to the current hard top configuration in 1951. A stunning garage find. Sold for $995k. While prewar MBs are not my forte, this car is fascinating due to its ‘one-off’ specification and having been generally lost to the 500K/540K community for over 4 decades. An amalgam of Sindelfingen and Hebmuller design themes, this 540K is quite handsome and carries a superb patina of age. Beyond the removal of the convertible top and the careful integration of the hard top, Hebmuller deepened the front fender side skirts and created bespoke vertical taillights. RM’s shop has recommissioned the car to run and drive but left cosmetics alone. What does the new owner do with the car? Return it to its as delivered Cab A design or maintain the Hebmuller mods that have become ingrained within its persona over the last 69 years? I vote for leaving it alone and driving it…

Lot 256: 1957 Mercedes 300SL Roadster, ID# 198.042.7500555, Strawberry Red/Creme leather, hardtop, tools, first owner until 2009. Original owner Jim Gilmore of Indy racing fame as the long time sponsor of AJ Foyt, 25,700 miles, Sold for $973k. I had to laugh when I read the description of this SL when I realized I had the opportunity to buy the car in February 2009. I was contacted by Gilmore’s son-in-law and flew to Michigan for an evaluation. It was freezing cold with snow on the ground as we roared around the neighborhood aboard the SL in the dark. I was slightly put off by some odd mechanical resonance from the engine but overall it was a very interesting, if scruffy, car. I noted that the soft top lid cover leather had been partially eaten by rodents. The panel fit and hood/door/deck lid shut lines were exceptional. I inspected (and still have copies of) the original bill of sale and the data card. While the beige hard top seems like a later addition, it is indeed original to the car based on my picture of the correct body number stamped underneath the rear edge of the top. I took 156 images and it’s interesting to compare them with the auction images. All is largely the same although the paint – a somewhat crude respray years ago – has been certainly massaged. It had 21k miles showing when I inspected it. After a few beers and a delightful dinner with seller I headed back to my hotel to get some sleep before an early flight home. It was all for naught, however. The asking price which I recall being about $450k was just beyond the market in early 2009. The woman RM SOTHEBY’S mentions bought the car shortly after my visit. She lived on Los Angeles and was able to organize an arrangement similar to a 1031 exchange via a broker which allowed justification of a higher purchase price. This is a very interesting highly original roadster and the $973k was well deserved. Let’s hope the owner is not tempted to restore the car. 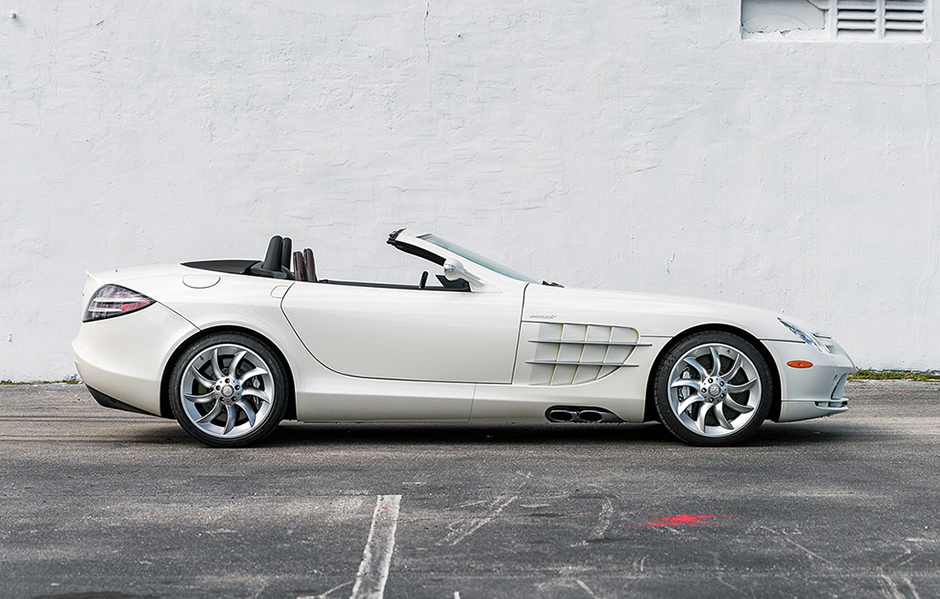 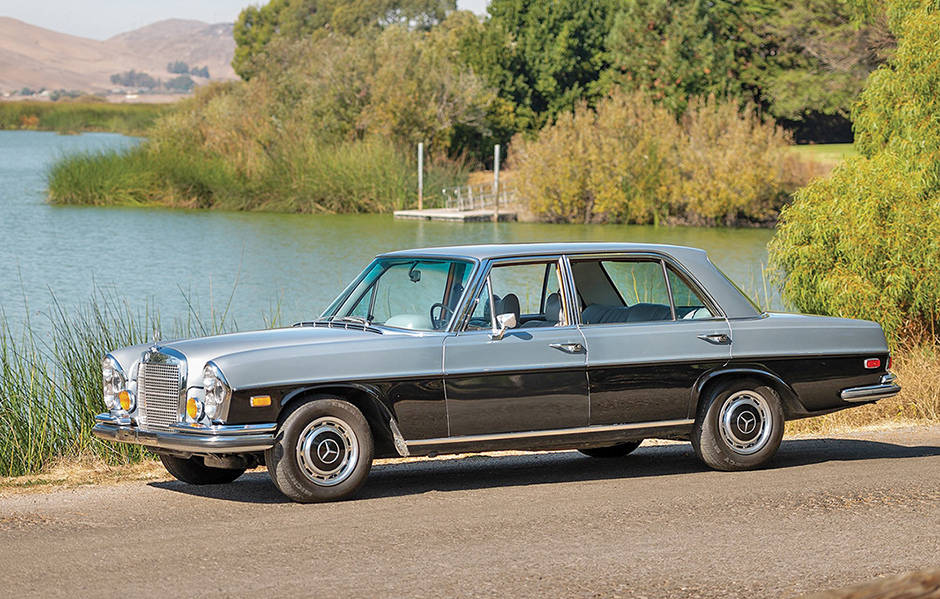 Lot 261: 1971 Mercedes 300SEL 6.3 ID# 09.018.12.004819, non-factory two tone of silver over black, 77k miles, single family owned, one respray, original interior, tools, owner’s manuals, spare engine (!), Sold for $36.4k. Hmmm, despite the jarring two-tone, this 6.3 might have been a pretty good buy. I see 387 as the paint code which is medium blue metallic aka blue poly so the car has been completely color changed. The interior has a nice look of preserved originality although carpeting the trunk is never a good idea. It appears an attempt was made to polish the intake manifold and cam covers to spruce up the engine bay. Thankfully no period bumper over riders were installed and the car still retains the selling dealer’s license plate frame. The panel gaps, shutlines and bumper alignment all look good. Hopefully the new engine that was purchased has been stored properly. If the car is reasonably up to date technically – 6.3s are NEVER fully up to date – and behaves well on the road, I would sell the spare engine and put the money toward painting out the silver to black. You’d then have a single owner black/grey leather California from new 6.3.