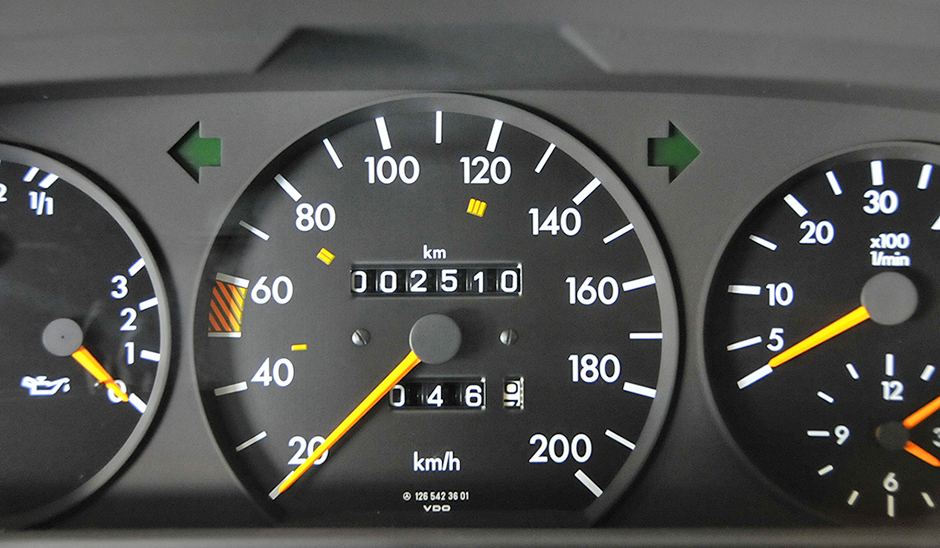 I have low mileage on my mind this week after buying a fabulous 2000 SL500 with but 4,600 miles on the clock. It will arrive shortly and it spurred me to look over the last 20 years of inventory for unusually low mileage purchases. Using 10k miles or below as the benchmark resulted in finding just eight cars. I’ll start with number eight and work down the list to number one.

I’d love to hear about your low mileage acquisitions. You’re welcome to email me with your great finds.

As you will read in some of the text below, extreme low mileage cars can be a mixed blessing, but any phone call offering such cars always makes my day. And as you will see from the cars listed below, I don’t discriminate against the more mundane models. 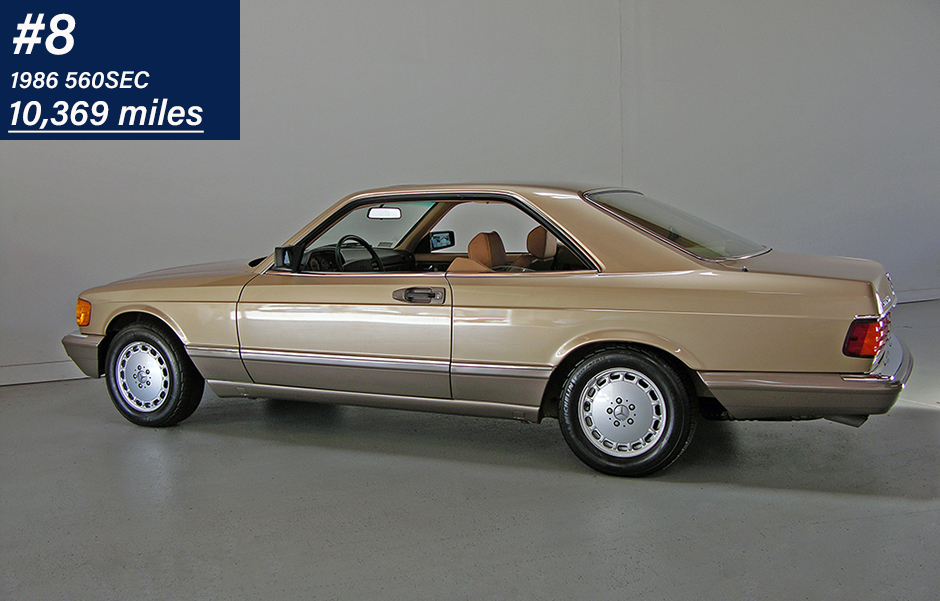 This amazing 560SEC was sitting in a garage in Raleigh, NC next to the #5 low mileage acquisition you’ll see further below. After a year or so of conversations with the original owner an agreement was reached and the cars came to me via Plycar in late 2018. This SEC exemplified the conundrum of extreme low mileage MBs; we spent almost $12k preparing the car for sale, work that included removing the entire sunroof assembly to correct the sunroof cable tube that was improperly fabricated at the factory. Thankfully the cosmetics were perfect. The sunroof issue manifested itself AFTER I had been paid for the car via a BaT auction. I came within a few hours of refunding the buyer all funds including the extra 5% BaT fee. Heart attack time. Everything worked out, however, and the new owner received one of the finest and lowest mileage 560SECs on the planet. 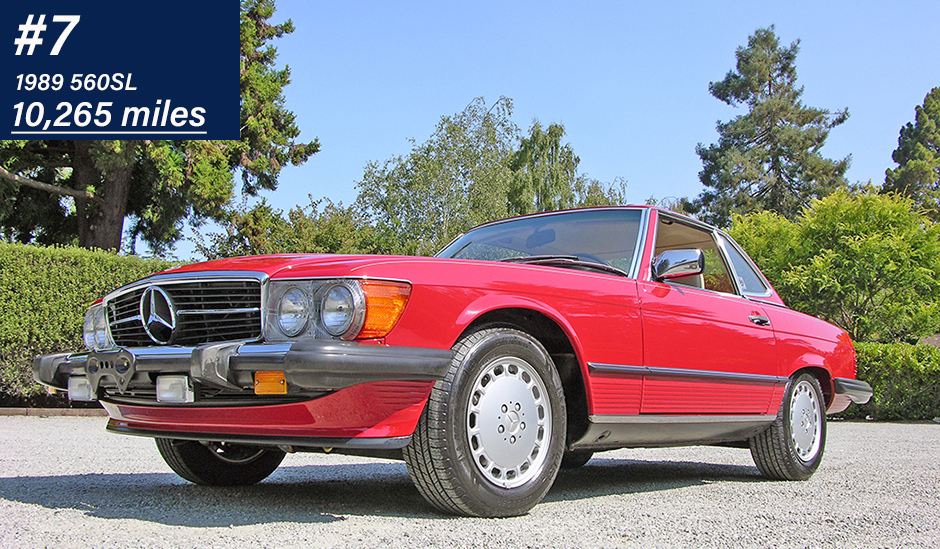 In the young classic MB realm, extreme low mileage 560SLs are comparatively common due to often being 2nd or 3rd cars that are doted on and used only on special occasions. Low mileage 560SECS, as an example, are very rare due to much lower production numbers and their typical use as daily drivers in period. 560SELs are more common but were also predominantly daily drivers. Interestingly, this signal red/parchment 1989 560SL also came from North Carolina and while it was generally unblemished cosmetically, it required over $8,500 to sort out technically. This required 90 days or so and the finished product simply glowed and behaved exactly as Mercedes-Benz intended. Buyer expectations run high in this realm and the client for this car wanted me to unwind our deal after hearing I had to perform a tiny brush touch to a door edge. This after the car was on the truck and on its way to him in Massachusetts. After assuring him this was a non-issue, the car continued to him and he fell in love the moment he saw it in early 2019. 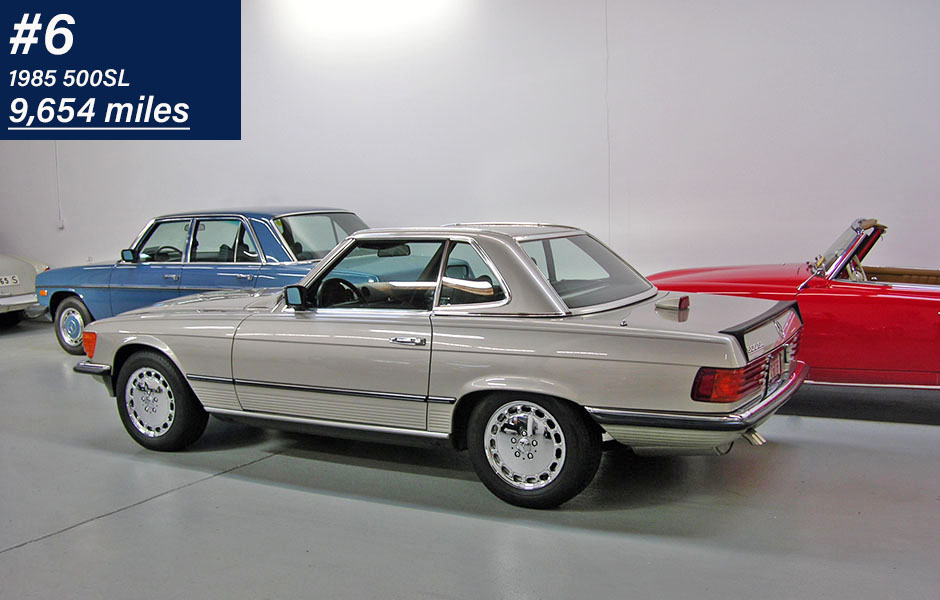 I chased this spectacular Euro 1985 500SL for over 5 years, initially inspecting it in Northern California and ultimately concluding a deal in 2013. Picking the car up required a bit of a road trip; the seller had since moved to Big Fork Montana. Enlisting the help of a best pal in Missoula, MT, I flew in and we cruised together up to the lovely Flat Head Lake area to meet the seller and secure the car. The trip back to Missoula was fabulous aboard this gorgeous SL. Smoke silver was very rare in 1985 and the Brazil brown leather complimented it beautifully. The data card revealed a nicely optioned French market car. While I would have preferred the correct Bundt style 14″ wheels, I sold the car to the Netherlands as-is. This is a car I would love to have back. And by the way, the mid blau 1976 240D 4-spd in the background had only 38k miles on it… 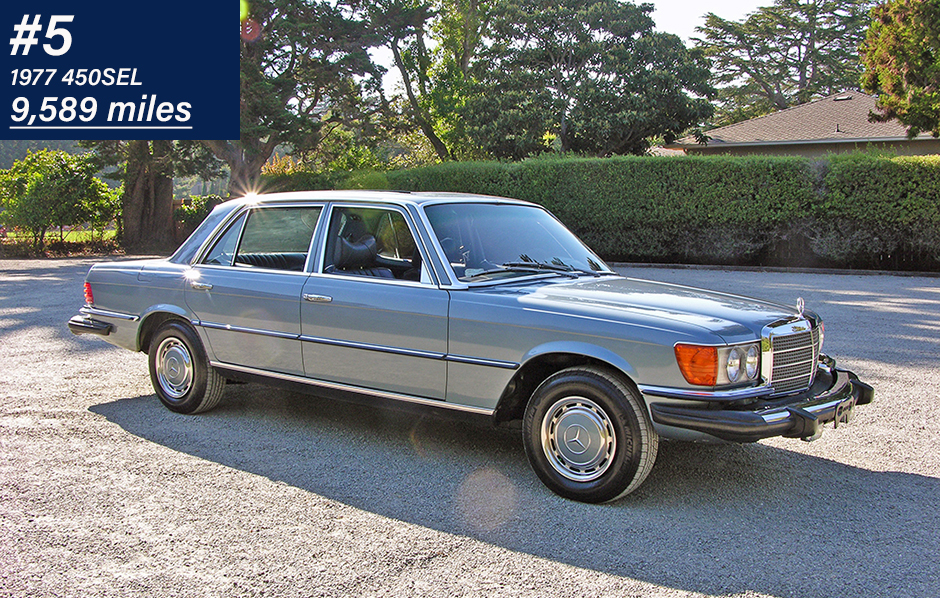 As I mentioned above, this extraordinary 1977 450SEL was sitting next to the 10k mile 560SEC in the Raleigh, North Carolina garage. Finding two epic single owner extreme low mileage young classic MBs was definitely a stroke of good luck. The sellers found an article of mine online and the connection was made. 450SELs also fall into the daily driver category and I think the lowest mileage 450SEL I had owned prior to this car was a 1974 with 54k on the clock. 54k is certainly low mileage for an SEL today but this 906 blue metallic 1977 car was an entirely different story. It and the family’s SEC had been doted on since they arrived as new cars and both had become a part of the family history. In fact, I was asked to delay sending a truck to allow time for the entire family to reunite with the cars for final photos. Extraordinary. After it rolled out of Plycar’s transporter in late 2018, I jumped in for a short drive. After just 100 yards, it was immediately apparent this SEL was a unicorn. With zero steering free play and the sense of absolute integrity, this SEL behaved as new. Excluding the $2,000 enclosed shipping, this car required $5,700 in technical preparation to be ready for sale. We managed to find a new old stock climate vacuum control unit to keep things original while sorting the heat/AC issues common to this era of MBs. After selling it to a good client on the Oregon coast in December 2018, the car came back this year and was resold to Columbia. I have not seen a lower mileage 116 since. What an extraordinary SEL. 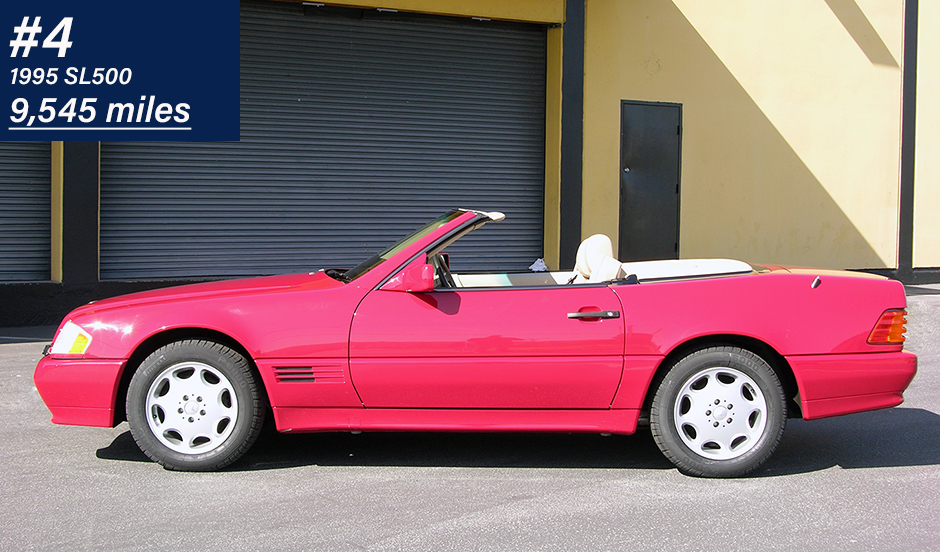 Not surprisingly there are more than a few R129 SLs that have been carefully preserved and have accumulated low mileage. I’m a fan of these sophisticated SLs and just agreed to buy a 2000 SL500 with only 4,600 miles on the clock. The market is coming around on the 129s and values are increasing for great ones. This imperial red 1995 SL500 was ordered with parchment leather rather than the typical saddle which is akin to the color of a baseball mitt. It had all the right ingredients for an investment grade SL when I purchased it in 2013: single ownership, absolutely complete handbooks, all infrared keys and its original window sticker showing an MSRP of $91,795. And it sat 30 just minutes south of me in San Jose so picking it up was a cinch. Neat car. 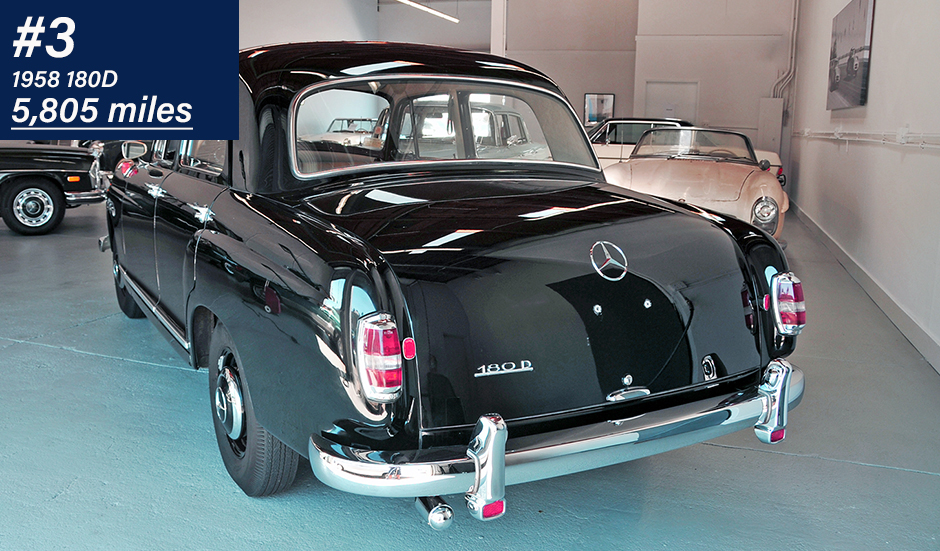 If we consider which 1958 Mercedes-Benz would have been a great candidate to fastidiously preserve and pointedly avoid driving, I don’t think a 180D would have risen to the top of the list. Beyond the obvious – 300SL roadster/300Sc coupe/cabriolet/roadster – a more likely secondary choice to preserve would have been a ponton coupe or cabriolet. Or maybe a 220SE sunroof sedan. So, I was skeptical when the call came in August 2012 offering a 1958 180D reputedly with less than 6k miles on the clock. Impossible I thought. The seller was quietly confident of the miles and with the car sitting but an hour’s flight away in Los Angeles, I felt it was a worthwhile trip. The good vibe I felt looking at the few pictures pushed me to have a look. Ever the skeptic, I probed every inch of that car when I arrived and between the visual inspection and the documents on hand I became a believer and bought the car. With full handbooks, the original owner’s service policy booklet and early service records, this quaint minimalist Mercedes was an absolute gem. It was sold new from Jim Angeles Studebaker, INC. in Minneapolis, MN to Mr. Peter Skobar on September 29, 1958. Mr. Skobar died early and the car languished in storage for decades before being sold in MN at auction in 1987 with a whopping 2,100 miles on the clock. I became the 3rd owner of this 1.8 liter four cylinder diesel on May 25, 2012. Fantastic find.

This signal red/parchment 1989 560SL came to me in late 2009 (before I was shooting large file images!). While I don’t remember where the car originated, I do remember it was mind boggling perfection and still have the photo shoot of the flawless original undercarriage. And I distinctly remember the car being a tough sell at an asking price of $36k at that time. It seems to me a broker from New York purchased the car for $34k on behalf of a client. If that client still has the car in same condition/miles as sold, it has been investment that has at least doubled in value. 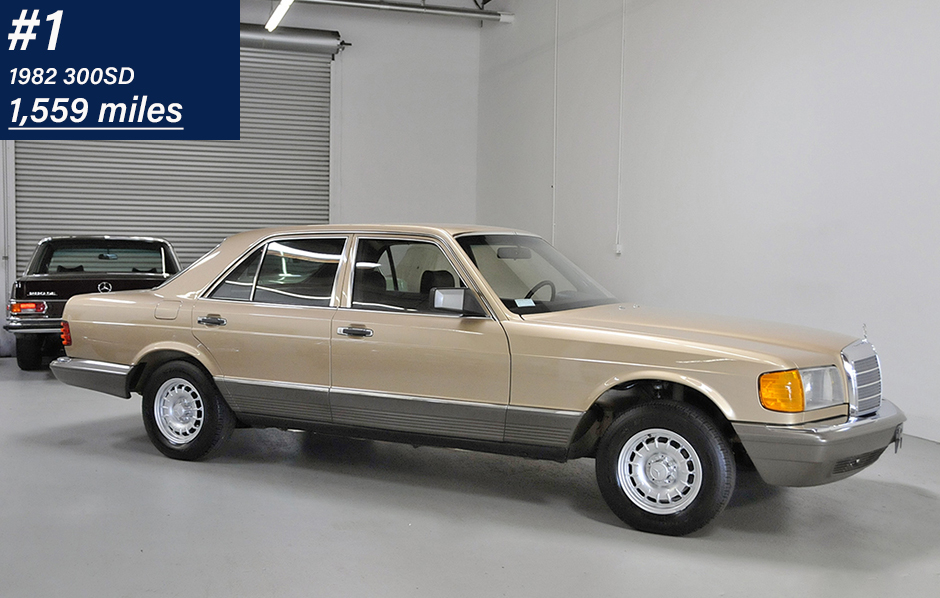 I find it counter intuitive that 2 of my 3 lowest mileage classic era cars over 30 years of business were diesels. What would possess a diesel buyer to purchase a car and never drive it. In the case of the 180D already mentioned, the owner died early in his ownership and the car sat idle for approximately 27 years. It emerged on the market in collectible condition and was cared for as such from that point forward. This 300SD was a different story although the original owner did die relatively early, but his involved ownership spanned 32 years. Like my reaction to the 180D, I was incredulous when I was called about this Champagne 300SD out of Victoria, British Columbia. The seller had recently purchased it from the original owner’s estate and noted an odometer reading of 2,380 kilometers, about 1,479 miles. Really? As I received images of all the related documents and conversed with the seller who had personal knowledge of the deceased owner, it was clear this scenario was the result of man possessed with granular details who obsessed over his 300SD. The flawless hand written notes chronicling his desire to own and his subsequent ownership of the SD confirmed the mileage. Forensically, the car perfectly reflected the outrageously low mileage. After a month or so consumed with importation paperwork and shipping arrangements, the car arrived exactly as I expected – looking, feeling and smelling like a brand new 1982 300SD. The full story is told in the article linked here.