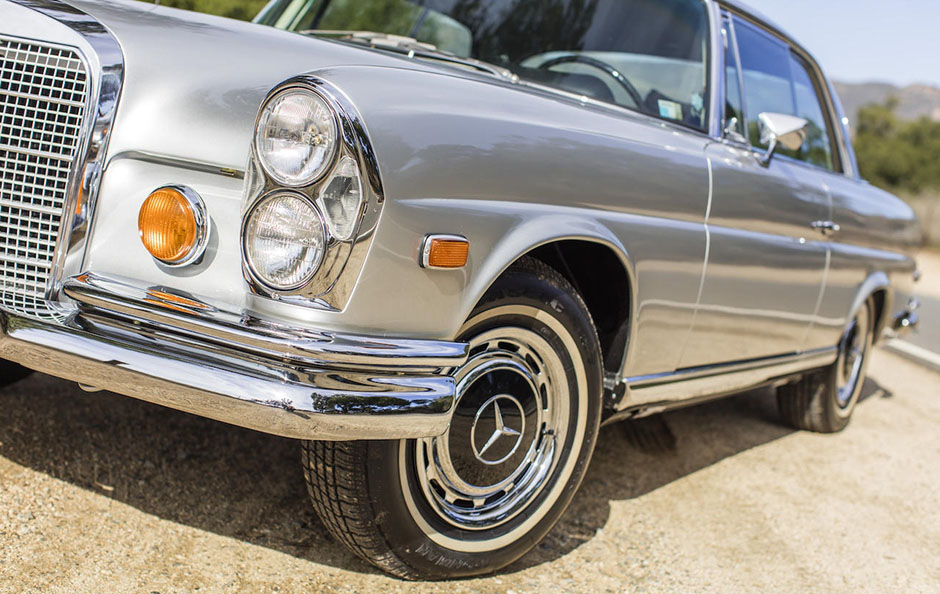 While Bonhams can’t claim to have bested its rivals in Scottsdale on sales volume, this international auction house has all its competitors covered with regard to longevity and diversity of offerings. Founded in 1793, Bonhams now covers over 60 different categories for art. I wouldn’t mind having the Couple aux têtes pleines de nuages (1937) diptych by Salvador Dali that Bonhams will offer through their New Bond Street, London house in March.

This single surrealist masterpiece is estimated bring $9m – $12m, significantly more than the $8.4m total of of their Scottsdale automobile result. Have a look at the Mercedes-Benz results below. I should mention my comments are based on images/descriptions on the Bonhams catalog. All sale prices are inclusive of all buyer/seller fees. 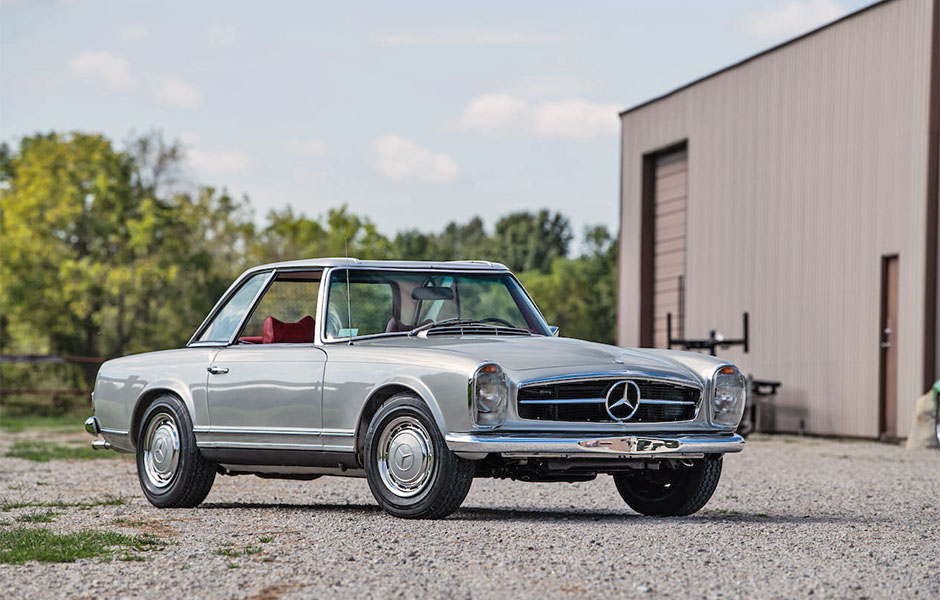 Lot 9: 1969 Mercedes 280SL ID# 113044.10.009229, Silver/Red, 4 spd manual, $41k spent on recent reconditioning, 2 tops, European model. Sold for $84k. Being a European model is a mixed blessing in the Pagoda world. While Euro headlamps and the lack of bumper over riders provide a clean look – as Paul Bracq envisioned when he initially drew the car – European models typically suffered higher levels of rust issues over their lifetime. While this SL is certainly photogenic, Pagoda detectives will note non-factory spot welds on both front fenders and the rear lower valance – too many and individually of a radius and depth different than that of the factory. And a most obvious tip that a restorer was not paying attention would be the crude replacement of the left quarter panel. The lower edge slopes forward toward the lr wheel arch at a far steeper angle than that of the right panel which is closer to parallel to earth. This means an aftermarket quarter panel replacement and reconfigured/replaced rear valance panel. Based on the undercarriage images, this car underwent major surgery and images of the rolling chassis with offending panels cut off would have been heartbreaking. Bonhams noted, “this European delivery 280SL is among the most desirable and finest examples we have been entrusted with.” Really? Ignorance is bliss and the new owner will undoubtedly be motoring with a big smile on his/her face while acknowledging the thumbs up from the passersby. If the buyer is happy with his/her $84k investment, all is cool. 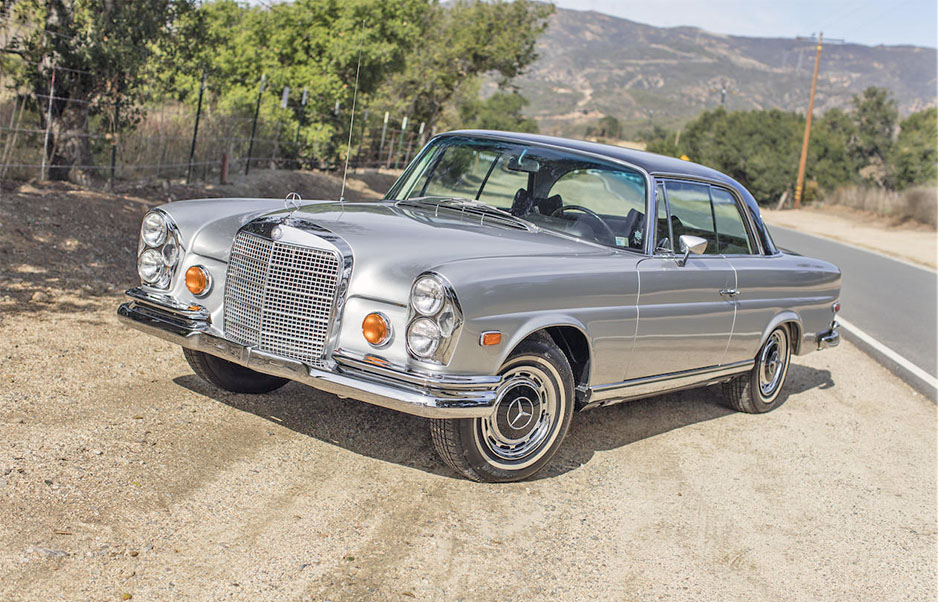 Lot 12: 1971 Mercedes 280SE coupe, ID# 111024.12.0022053, Silver w/black top/wheel covers, ‘nut and bolt’ restored California 111 six cylinder ‘high grille’ coupe, sold for $91k. Contrary to the 280SL above, this 280SE coupe was an ideal candidate to restore – essentially rust free and out of 40 year CA ownership. Based on Bonhams’ description and the images it’s apparent that this coupe was fully disassembled. The result is quite impressive. Front and rear bumper symmetry, meticulous exterior coachwork swage line transitions from panel to panel, headlight surround to body fit etc. all appear as Mercedes-Benz intended when they constructed this 280SE. Look at how the white line on the road is reflected in the driver’s side of the car – crisp and straight as it passes from panel to panel. Unfortunately both the data plate and ID plate are missing from the core support, a common failure with restoration shops. Pulling both plates, putting them in a plastic bag and in my desk at the beginning of my restorations has avoided this snafu. Undercarriage appears fully restored with correct hardware finishes, correct factory chip coat texture and correct 158 white grey bumper backsides. The engine bay dazzles. The engine was overhauled as were most other mechanical systems. Interior looks superb and evidently the original windshield was retained. Thankfully the restorer relied on our friends at the MB Classic Center for key parts. $91k for a high grille six cylinder 280SE Coupe is massive and will buy a decent 280SE cabriolet (with a bit of luck) as well as a nice 3.5 coupe. This buyer rightfully rewarded the seller/restorer for his extraordinary attention to detail and knowledge of what constitutes a proper 111 coupe. The California provenance contributed as well. 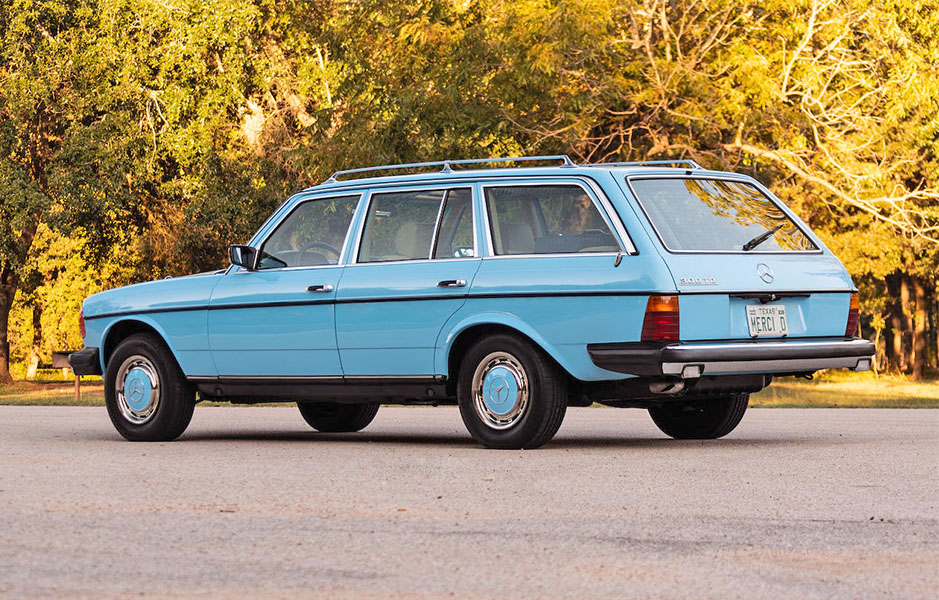 Lot 15: 1983 Mercedes 300TD Wagon, ID# WDBAB93A7DN014735, China Blue (see notes below), Cream Leather (see notes below), tools, sunroof, $31k spent on restoration w/receipts. Sold for $21.2k. That Bonhams would include a 123 wagon in their auction is indicative of the iconic 123 series wagons growing popularity and, I dare say, collectible status. I’ve owned 3 exceptional wagons over the last 90 days. Unfortunately, Bonhams chose a decidedly non-collectible example. The more I read about this car the less it made sense. It was a no-sale at a high bid of $23,500 at BaT on 11/5/19 and the seller likely felt a conventional auction house would help his cause. BaT listed the mileage at 168k, Bonhams did not disclose mileage. To be nit picky, I have to say the color is in fact 922 pastel blue from 1976/1977, certainly not DB934 china blue. The interior went from palomino MB TEX to a generic beige vinyl. Which begs the question, why would anyone color/trim change a modern era Mercedes? The restorer managed to crudely change the engine bay color to match the exterior, which meant the engine came out. Flaking paint on the auxiliary fan brackets reveal the original db900 deep blue. The core support lacks any original decals and the data plate which is usually indicative of a replacement support, a very bad sign. From the firewall back the undercarriage had been painted an awful gloss black, seemingly with spray cans. The cowl sheet metal lacked holes to secure the removable cover between the cowl intake vents??!! All in all a substandard but photogenic 300TD wagon. Walking away from the BaT high bid cost the seller about $6,500 after Bonhams’ buyer/seller fees and entry/transportation costs. Strange. 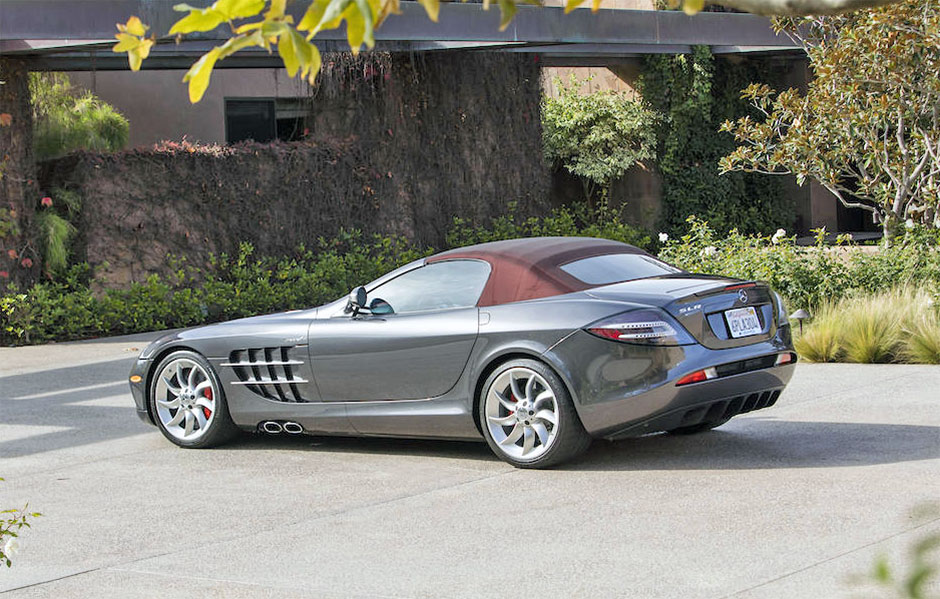 Lot 25: 2008 Mercedes/Mclaren SLR Roadster, ID# WDDAK76FX8M001802, Crystal Palladium Grey/Silver Arrow red leather, burgundy soft top, size large driver’s seat, 5,500 miles, original MSRP approx. $495K, Not Sold against an estimate of $350k – $400k. Despite only having driven one a few hundred feet, I’m a fan of SLRs. If by chance unlimited funds arrived in my bank account, I would chase the lowest mileage 722 Coupe on the planet. The SLR was introduced in 2003 and experienced barely 6 months of demand before languishing in showrooms. The plan to sell 3,500 of them over 7 years proved to be an absolute fantasy and it can be said that Mercedes shot themselves in the foot by announcing this massive production schedule, thereby destroying any sense of rarity/future demand for the cars. This roadster seems to have the right ingredients: low enough miles, attractive paint/trim/soft top combination. While this market is generally beyond my knowledge base, the estimate seemed optimistic. 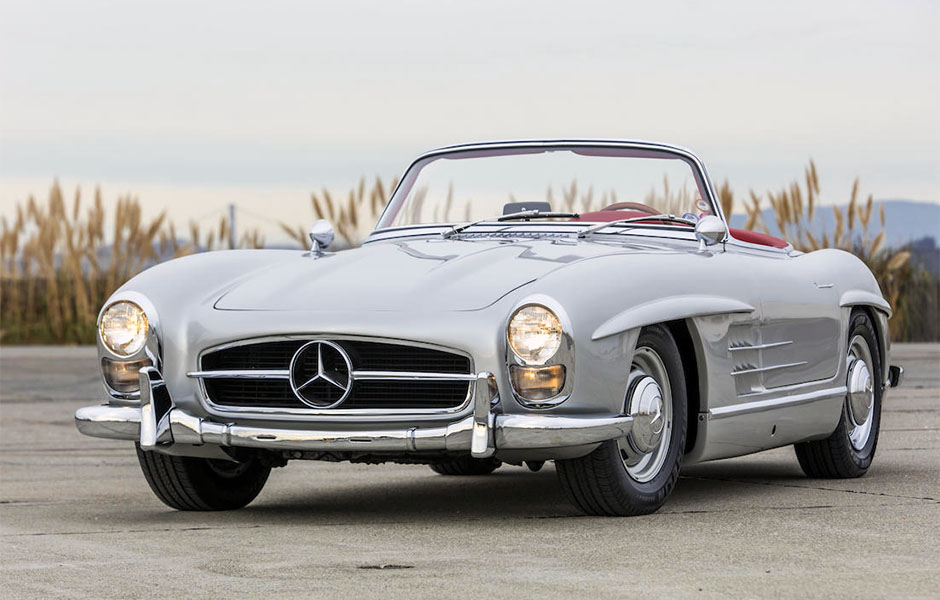 Lot 30: 1957 300SL roadster, ID# 198.042.7500532, luggage, matching number engine, originally bright red/creme leather, 77k miles showing, Nardi steering wheel, No Sale. This roadster received its pre-auction sorting next to me at Burlingame Motors, an extremely competent shop for W198 series SLs, a myriad other classic Mercedes-Benz models. Unfortunately, I gave it only a passing glance as I checked on my decidedly less expensive projects. The recently restored interior looked consistent and attractive. The car presented itself well cosmetically with a tidy and clean engine bay. It was a no sale in AZ against a estimate of $950k – $1.1m. All I can say is that the days of an above average driver quality 300SL roadster bringing circa $1m are over. 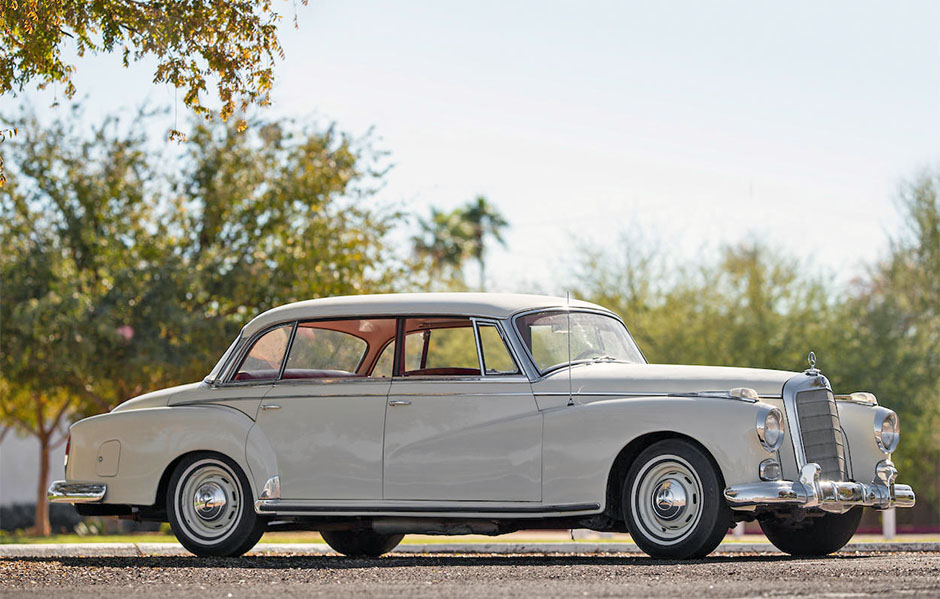 Lot 31: 1959 Mercedes 300D ‘Adenauer’, ID# 189010-12-9500164, 1 of 607 constructed in 1959, 1 0f 21 fitted with a divider window, white/red, Sold for $29k. Based on the DB190 color code on the trim plate, this 300 was originally graphite grey, a far more interesting exterior color than white against the red interior. The fact that it sat on 40 year old bias ply tires, leads us to believe the car could not have spent much time on the road in recent decades. It has the look of a moderately well protected ‘garage find’. Installing the correct full face wheel covers could consume $3k. The painter charged with the color change to white got carried away and shot the underside of the deck lid – should always be satin black regardless of exterior color. The interior seems to be a blend of original materials and older replacement materials. The interior wood was uniformly weathered and it appeared the original radio blank-off wood panel has been drilled and cut to accept a more modern radio. Driver’s side panel gaps look suspiciously poor, particularly driver’s door to front fender gap and the gap to leading edge of rear door. Chrome is gently weathered and the engine bay looks tidy enough. The question with a needy Adenauer, regardless of whether its a 300/300B/300C/300D, is always what do you do with it? I’ve owned a dozen or so over the years, many of which were in dire condition. And a few divider window models as well. While the divider window cars are rare, they are much less comfortable to drive due to seriously restricted fore/aft seat travel.  All my 300s found a homes, often in Eastern Europe, and all were profitable business propositions. However, I never committed financial suicide by taking the fateful step of trying to restore one. At $29k, this looks to be a fair retail value. The next step in this car’s life is the fateful one. 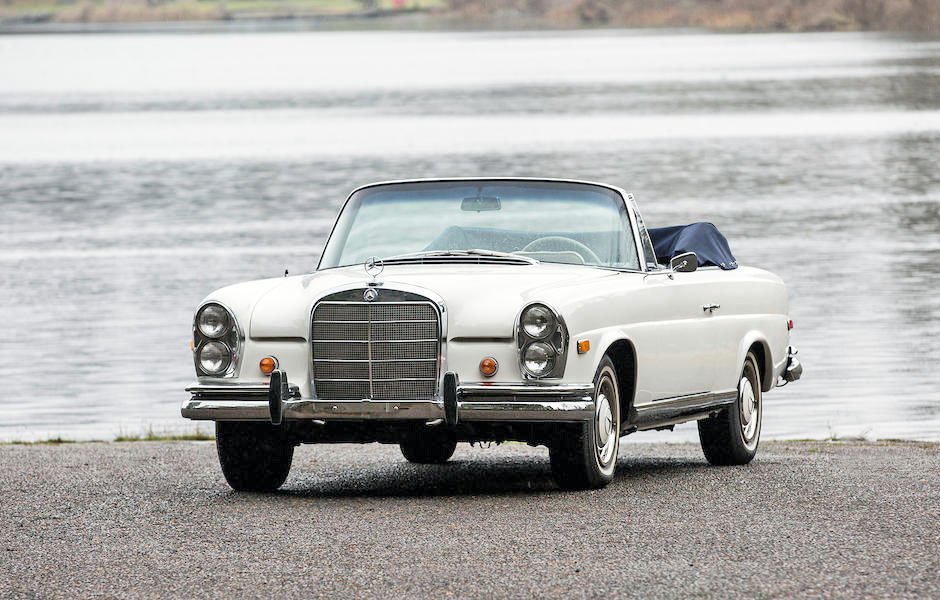 Lot 57: 1966 250SE Cabriolet, ID# 111.023-12-083391, white/blue leater, blue soft top, column automatic, delivered new to California, Kuhlmeister AC, No Sale against and estimate of $100k – $125k. Aside from noting that this 250SE had been serviced/inspected by a ‘Mercedes mechanic’ there was not one further word of useful information in the catalog description. Presented via gloomy images taken in the rain in the brochure/online, this cabriolet just did not endear itself. The interior looked certainly passable with nice door panels surrounding clearly weathered/cracking seat leather, likely benefiting from prior dyework. Based on the tail-up appearance, the car probably lacked its correct rear suspension compensator. The door jambs looked correct, bumper alignment looked acceptable and the chrome looked to be acceptable street quality. Painting the wheels back to 050 white would cheer things up visually. The flat black engine bay area killed the general overall sense of slightly weathered originality. While the core support still had both the ID plate and data plate mounted it was all rather rude looking in flaking flat black. 111 cabriolets have not been immune to the market’s 48 month down slope in prices. I have been marketing a fully sorted older ‘street’ level restored 250SE Cabriolet and the serious interest has been just below $100k. Admittedly it is both exterior/interior color change but presents itself beautifully.  It takes a special 250sE Cabriolet indeed to generate over $100k today. 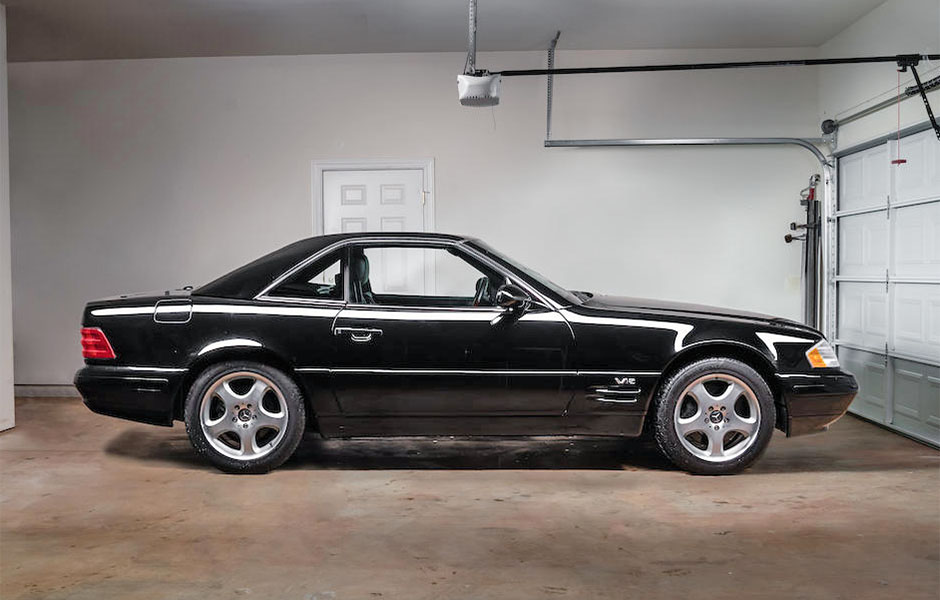 Lot 81: 2000 Mercedes SL600, ID# WDBFA76F6YF189787 Black/Black, handbooks, California car, clean CarFax, 38k miles, Sold for $17.9k. I’m a fan of V12 129 series SLs and just sold my spotless 1993 (1st year of production) 600SL with but 13k original miles. When they are behaving as Mercedes-Benz intended, the V12 129 driving experience is other worldly. I have likened the driving sensations to that of a 400HP magic carpet. That said, my mantra has always been to buy the lowest mileage, most neurotically preserved/serviced example possible. At 38k miles, the attractive SL sits in the mid-mileage realm and would need a careful look. Despite not having been ordered with the then new ‘Sport Package’ that offered staggered alloys, deeper front and rear facias and deeper rocker panels, this V12 looks smashing. Fortunately the car was ordered with option 644, the attractive five-spoke 17″ alloys. And the  order sheet included multi-contour seats. Overall this SL looks quite nice and if all is reasonably well regarding the self-leveling suspension and accessory functionality and if the V12 is reasonably dry underneath, this was an excellent buy.