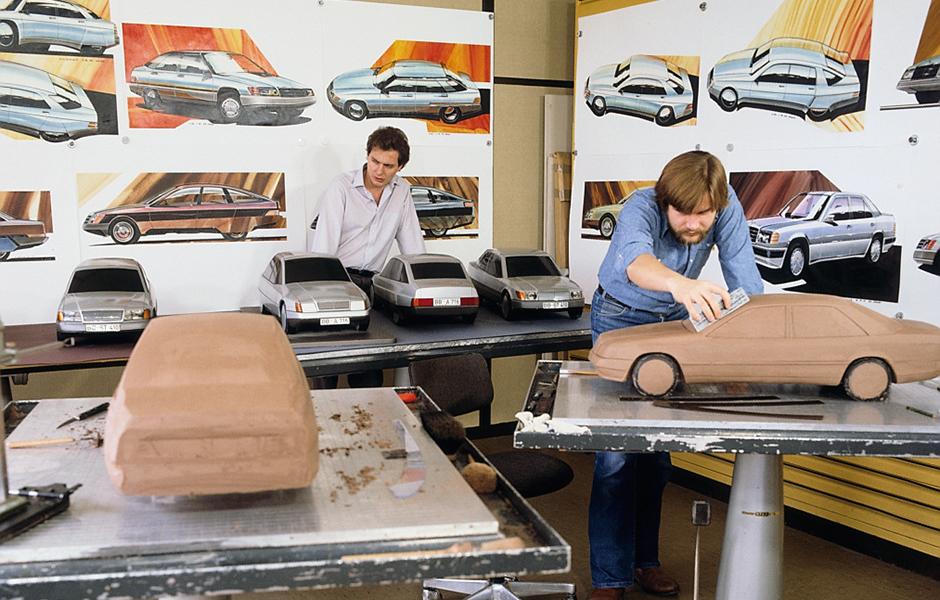 While I wasn’t aware of it at the time, my road trip late last month from Las Vegas back to my office in the SF Bay area aboard my newly acquired 57k mile 1995 E320 wagon coincided almost to the day with the 124 series’ debut in Spain 35 years ago. I drove 124 wagons daily as they came back around as trade ins at local MB dealers in the late ’90s and early ’00s. And now the series is 35 years old.

On hand for journalists to thrash in Seville, Spain during the last week of November 1984 were the 72HP 200D, the 190 HP 300E and its down market cousin, the 260E. The verdict from the journalists? Evidently, there was universal praise for this well executed, aerodynamic (0.29 Cd), and crisply designed replacement for the venerable 123 series.

Thus began the 11 year life of the 124 series that resulted in the production of a bewildering array of models that ranged from Europe’s taxi of choice, the 200D, to the extraordinary 381 HP E60, and every conceivable configuration in between. Total global production would be a staggering 2,737,680 units. 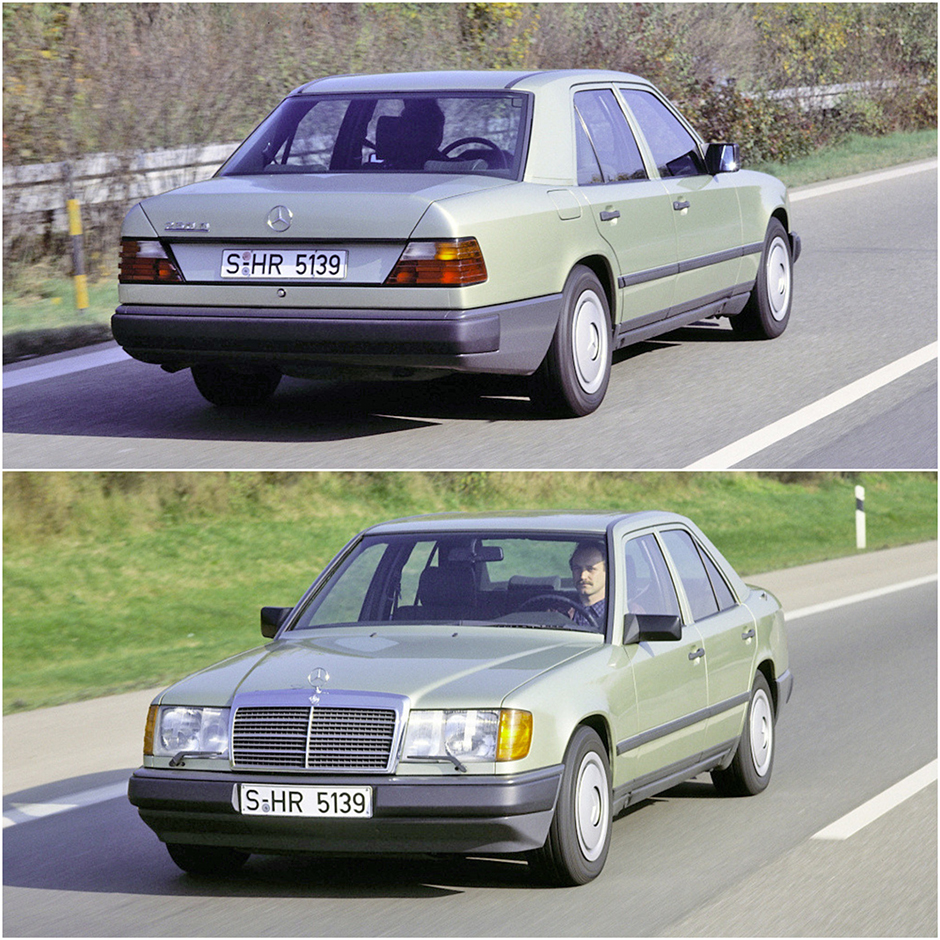 Mercedes referred to the new 124 class design as “automotive futurism.” It was an exceedingly clean design. This is a 1986 200D Euro model. Aerodynamic considerations ended the bluff face of all prior mid-range MBs.

The North American market waited until the 1986 model year for a taste of this new series. Correctly assessing America’s general sense of privilege and entitlement, Mercedes had no intention of importing the spartan 4 cylinder gas and diesel models. We initially received the 177 HP 300E and the 109 HP 300D. These cars were extremely well received despite each approaching $38k in well equipped specification.

Road & Track got their hands on a early 300E and were very impressed indeed. Interestingly, the MB Zone office sent over a 5-speed manual gearbox model figuring it would appeal more to the performance oriented R&T staff. The automatic transmission was an $800 option. They loved the car, particularly the fundamental grip provided by the sophisticated multi-link rear suspension and the lively 0-60 MPH time of 7.5 seconds. A ‘magnificent performer’ was the verdict on power and handling.

With excellent visibility, sensible interior ergonomics, adequate power and excellent road feel, this was a Mercedes that I could use daily.

However, the new E’s crisp and minimalist styling found less support from the staff: “The styling is controversial and clearly evolutionary, leaving no doubt it comes from the house of Daimler-Benz.” Mercedes referred to the design as “Automotive futurism in the Mercedes-Benz tradition.”

The tallish tail with diagonal trunk closure shutlines were the design elements that offended R&T‘s sense of design. The initial nudge of forward thinking design always requires some time for us to absorb it. Other complaints included the climate control system’s lazy temperature transitions and the inability to deliver warm air through the center vents. Oddly, there was no mention of the clever single windshield wiper’s very efficient eccentric operation. 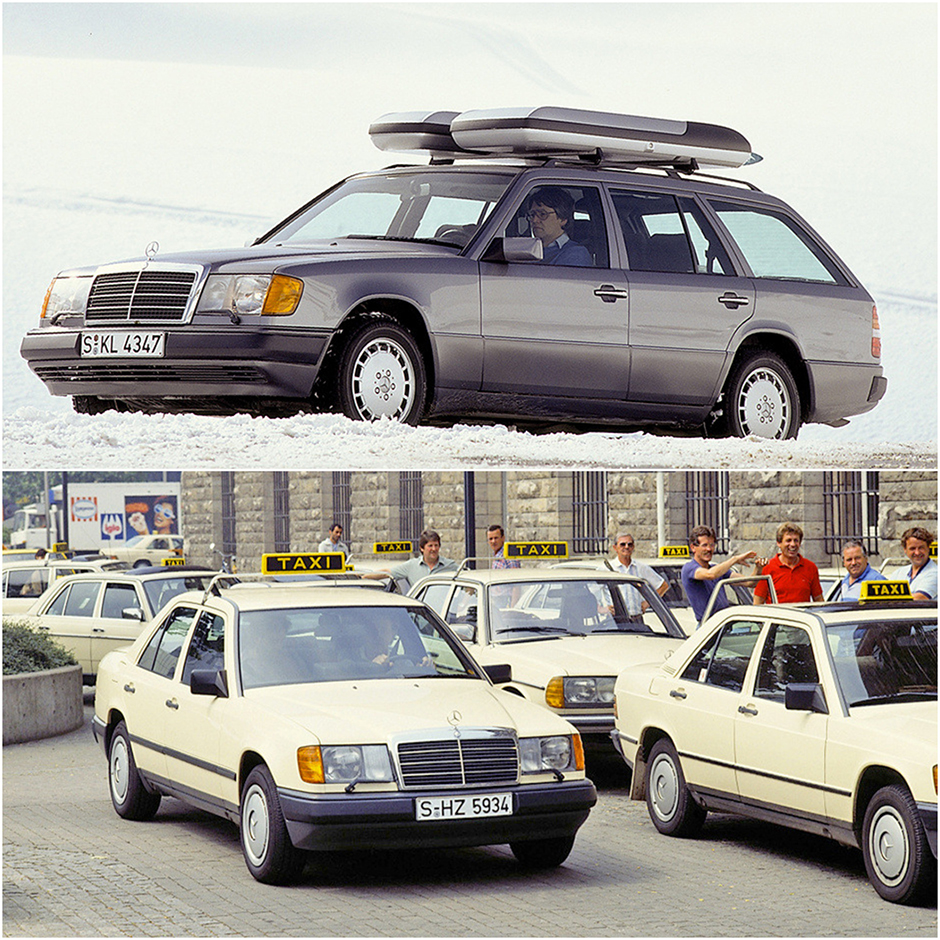 From small capacity diesels favored by Europe’s vast taxi community to the luxurious US spec wagons, the new 124 ranged proved to be a versatile platform. Almost 2.8m 124 models were constructed. Evidently light ivory was the preferred color for taxi drivers in the middle ’80s. We see some 123 models mingling with the cleanly styled new 124s in this image.

Covering all the 124 iterations would require a book and the US market typically received the most luxurious and heavily optioned models. We received the 300TD wagon in Spring of 1986, the 300TE gasoline wagon in 1988 and the 300CE coupe circa 1988. At this point the US gas models were fitted with the 3.0/2.6 liter 12 valve M103 six cylinders.

Four valve technology would arrive in the US via the 300CE-24 in 1990 and the first V8 124, the 400E, arrived in 1992. A US market car only, the 400Es and the subsequent E420s were/are exceptional road cars with silky smooth power combined with the stout refinement of the 124 platform. Sadly, the 400/420E’s low production numbers make it fairly impossible to find an acceptable example today.

The 300CE Cabriolet rounded out the US 124 model selection nicely upon its introduction in 1993. At a price tag approaching $80k, the cabriolet with its automatically retracting soft top was quite an indulgence. The ultimate 124 arrived in the US in 1992 as the mighty 322 HP 500E, a collaboration between Mercedes-Benz and then-struggling Porsche. 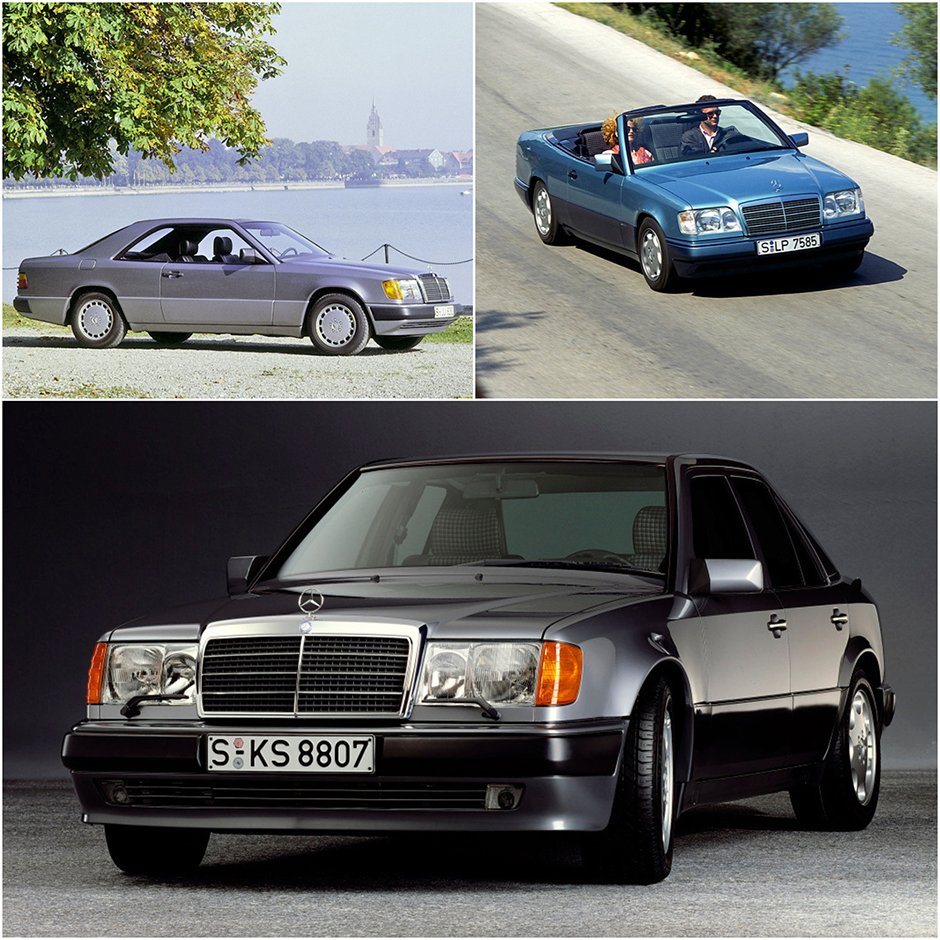 All wheel drive and 24 valves

Cognizant of the growing popularity of Audi’s all wheel drive model line, the 124 series debuted Mercedes’ 4MATIC automatically engaging four-wheel drive system. It was an option for the six cylinder sedans and wagons early on in Europe and available for the US market in 1990 as a $6.500 option. Fuel mileage suffered in the 4MATiC sedans/wagons and the sensation of the extra driveline mass was apparent to those sensitive to driving dynamics. The complexity of the system also raised potential repair costs significantly as these models accumulated mileage.

The first generation 300E 12-valve engine’s paltry 177 HP was addressed in 1990 with the introduction of the M104 double overhead cam engine, initially offered in the 300CE coupe. The power increase was a meaningful 24% to 220HP and its inclusion in the sedan/wagon lineup coincided with the series wide nomenclature change initiated by Mercedes in 1994. The 124s became E320, E500 etc.

An early 300E 4MATIC uses its four-wheel drive capacity to sail by a 116 sedan in winter conditions. The 4MATIC option cost about $6,500.

What’s collectible and what’s not

During my drive from Las Vegas to the SF area in my E320 Wagon, I was reminded of this car’s contemporary driving characteristics. With excellent visibility, sensible interior ergonomics, adequate power and excellent road feel, this was a Mercedes that I could use daily. If fact, I feel the car is more comfortable than the 2012 E350 Wagon I’ll offer for sale shortly. Granted it’s a highly preserved 57k mile example that behaves just as Mercedes intended.

If you’re after one, it pays to buy the very best to insure you actually experience the car as Mercedes-Benz intended. Despite the massive number of US 124s sold, preserved low mileage examples are very difficult to find. They were daily workhorses in the tradition of Mercedes’ prior mid-range models (114/115/123) and typically accumulated enormous mileage and subsequent neglect. If you know of a great one, drop me note!