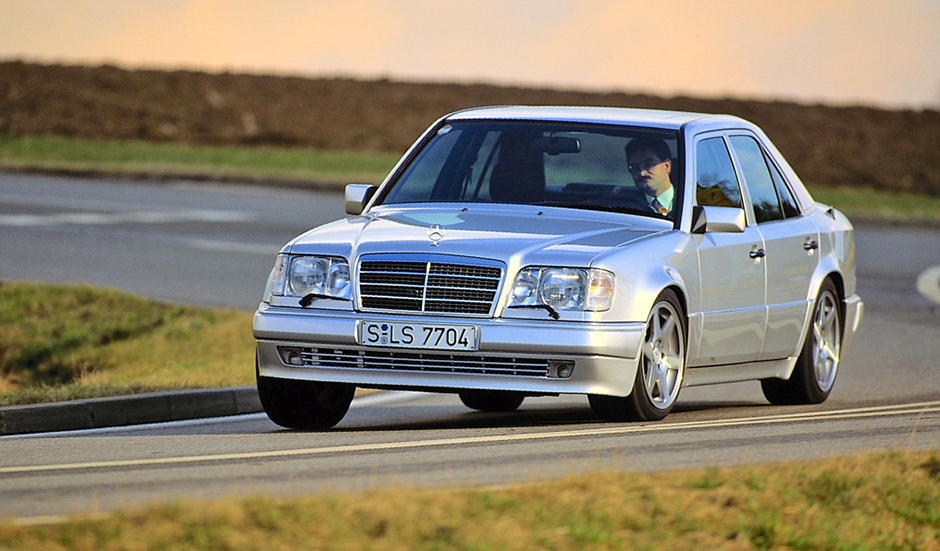 This mono-chromatic 500E reveals the poise that the addition of upgraded suspension components, 500SL brakes and wider tires/wheels afforded. The rare ‘Evo’ alloys are coveted today by 500E/E500 owners. The revised front valance and front/rear fender flares are apparent here.

I think its about time to recognize what must be considered one of the most interesting ‘young classics’ from Stuttgart today. Make that Stuttgart AND Zuffenhausen, the home of Porsche Cars. Yeah, 123s are hip and and plentiful and a great 107 from the ’70s or ’80s is definitely worth owning but there is a four door from the early ’90s that has quietly become the choice of many discriminate young classic MB buyers.

It dawned on me recently that I’ve never written a word about this extraordinary blend of MB and Porsche engineering. I drove one for over a year in 2001 and I felt at that time it was an outstanding combination of understated muscular beauty, effortless and silent power, ergonomics and rarity. It was a 1993 500E in pearl black/creme. Epic car and one that made me feel like a titan of industry while behind the wheel. Of course I was – and still am – a titan of nothing. But certain cars seem to puff us up.

The metrics are pedestrian today; 0-100 km/hr required 6.1 seconds which was very impressive for a heavy saloon in 1993. But I remember the 60 mph – 100 mph rush with the throttle ‘matted’ to be most satisfying. 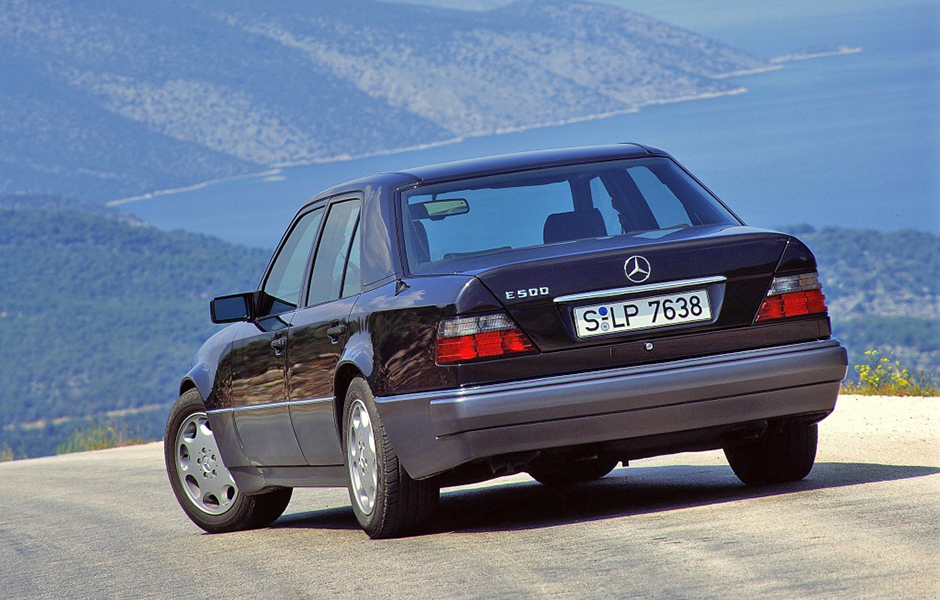 1,548 US models were constructed during 1992-1994. The early cars are coveted due to Porsche’s more extensive technical involvement.

The parallels between the birth of the 300SEL 6.3 and the 500E have been discussed for years. In the middle ’60s MB engineer Erich Waxenberger was eyeballing the flagship M100 600’s 6.3 liter engine as an interesting bolt-in for the newish 300SEL air suspension sedan. In 1989 we assume more than a few MB engineers were envisioning bolting the new 322 HP M119 4-cam V-8 into the most sensible sedan offered at that time, the fairly bland but superbly executed 300E.

While Waxenberger reportedly worked after hours on the mule that would become the stunning 6.3, the V8 124 project was carefully considered and would not have happened without a partner located barely 5 miles north of Mercedes-Benz by the name of Porsche. Demand was deemed to be very low for what could be considered one of MBs first modern era ‘halo’ cars. Modifying the existing 124 assembly process to integrate the many special modifications was not practical.

Porsche was suffering a dramatic sales decline in the early ’90s – remember the unreliable C2/C4 models – and had the capacity and financial need to assist Mercedes. So it was a proper match. Bodies painted at the MB’s Sindelfingen plant were delivered to Porsche’s Rossle-Bau plant which in turn installed the 129 bits and pieces that Mercedes shipped from Sindelfingen and Untertürkheim. 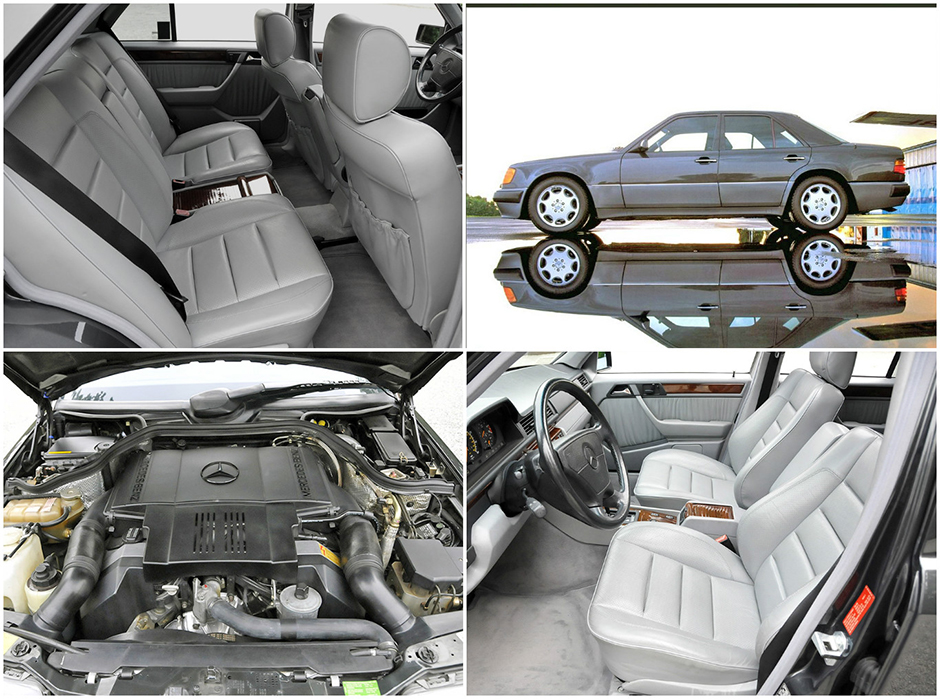 The perfect blend of dimensions, comfort, performance and refinement? There is much that is unique within this amalgam of Mercedes-Benz creativity and Porsche assembly prowess. 322 HP 4-cam V8 provided the muscle for the low production hot rod E-class.

The result was an uber 124 recognizable by tastefully flared fenders, a lower ride height, modified front valance and 225 series tires on wide 129 8-hole alloys. Other components sourced from the 500SL were brakes and the ASR which as Mercedes pointed out “was a necessity rather than mere technical gimmickry.” The engine in fact was based on a slightly different architecture than that of the 129’s 4-cam.

Daimler AG notes: “It was the first car to feature what was known as the “standard deck” engine – one and the same crankcase used for both the 4.2 and the 5.0-litre unit. This meant that the 5.0-litre engine was 16.5 millimetres lower here than when it made its debut in the 500 SL (R 129) a year and a half earlier. Shorter connecting rods ensured that the bore-stroke ratio remained the same. In addition, in the E 500 the Bosch LH-Jetronic injection system, with electronic control and air-mass sensor, replaced the previously used mechanical/electronic KE system.” Very interesting.

The driving experience is one of effortless power, superb balance and refinement. The interior was also unique and offered bucket seating front and rear with the seats reportedly provided by Recaro. They were perfection for my 5’11” frame. The metrics are pedestrian today; 0-100 km/hr required 6.1 seconds which was very impressive for a heavy saloon in 1993. But I remember the 60 mph – 100 mph rush with the throttle ‘matted’ to be most satisfying. 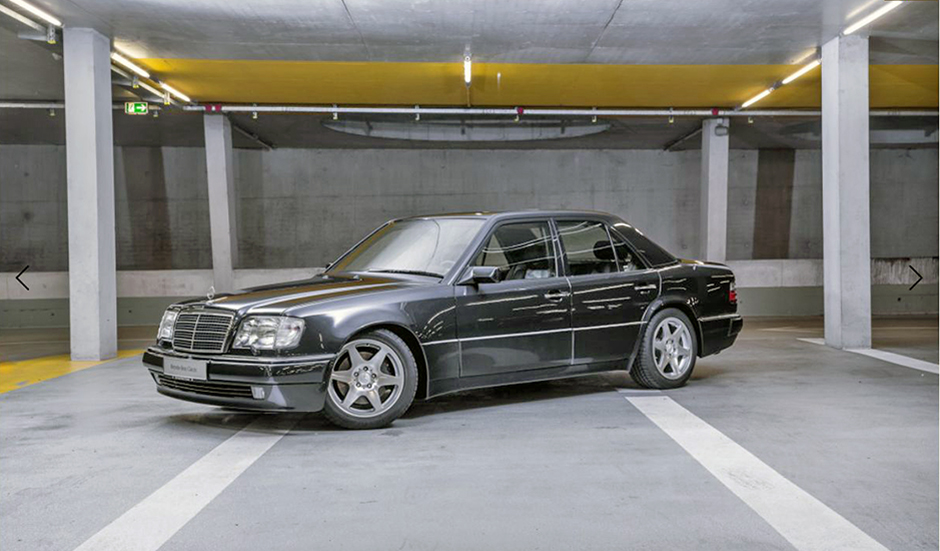 AMG massaged abut 45 500Es by enlarging the engine to 6.0 liters and adding their proprietary suspension and exhaust modifications. The result was the E60. Peak power at the end of production was 399 HP and more than a few 500Es went to AMG in subsequent years for E60 upgrades. The original cars can be confirmed by the code 957 on their data plate indicating the ‘AMG Technology Package.’

$25-$30k should buy a healthy and attractive car today with mid-mileage of 100k or so. When miles drop below 50k and condition is highly preserved with faultless mechanicals, prices rise steeply.

Road & Track summed things up quite nicely in their May 1992 issue: “The 500 E is a magnificent high-performance sedan that’s heavy on the visceral. It looks right (low slung, intimidating, but not showy, like the AMG Hammer or Mercedes’ own 600 SEL). It sounds great (nothing beats the thunder of a big V8). It goes sinfully fast for a family 4-door (155 mph, electronically limited). It has everything you’d expect in a Mercedes. And a few things you wouldn’t. Mostly, gobs of horsepower and an attitude that says … well, you know the word.”