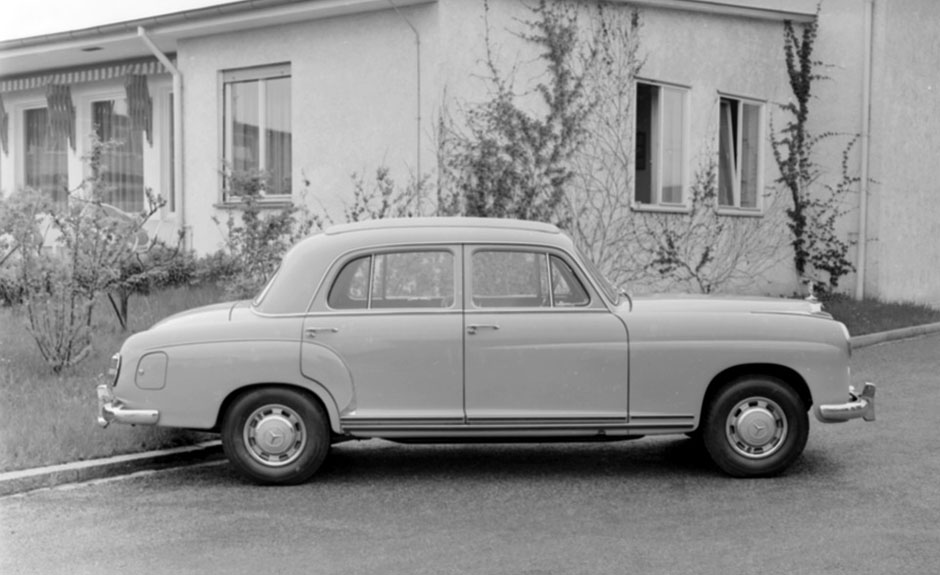 1954 220a fitted with expansive and rare Webasto sliding canvas sunroof.

In March 1954 Daimler-Benz introduced the new 220 model featuring a decidedly modern overall design. The six-cylinder model bore the internal designation 220 a or W 180 and now also boasted a self-supporting ponton-type body structure welded firmly to the frame floor/unit. The close kinship to the 180 model was also evident in the styling, although the slightly different proportions of the 220 a gave it a certain undeniable elegance. The convertible A and C variants were introduced in September 1955 and went into production barely a year later.

But the 220 a had a wheelbase that was longer by 170 millimetres, of which 70 millimetres went to improve legroom in the rear. The remaining 100 millimetres served to lengthen the front end, necessary to accommodate the vehicles six-cylinder engine. The engine hood was drawn down around either side of the radiator grille to almost level with the bumper, and the fresh-air intakes were situated behind the standard mounted fog lamps. Unlike with the car’s younger brother, however, the front turn indicator lamps were mounted in chromed housings positioned well forward on the fenders. 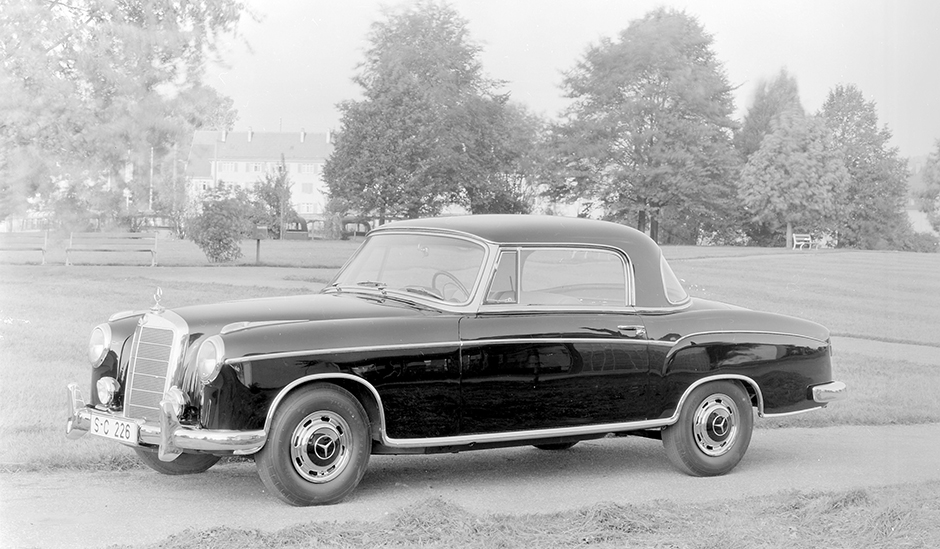 The front suspension and subframe concept were borrowed from the 180 model; the rear suspension on the other hand was a completely new design. The single-joint swing axle, which had a low pivot point and had been developed for the W 196 Formula One racing car, was now put into service for the first time in a Mercedes-Benz production passenger car. The longer control arms meant smaller track and camber changes on spring compression and thus improved handling.

The six-cylinder engine of the 220 a came from the predecessor model of the W 187 series, but with a number of modifications: Compression was increased, and thanks to a sharper camshaft and larger carburettor the unit was able to raise the power output to 85 hp (63 kW).

The brake system was improved considerably. Ribbed brake drums with turbo cooling were fitted to the 220 a on all four wheels and ventilation slits in the wheel rims and trims ensured an adequate supply of cool air. A brake booster was fitted as standard from September 1955.

In March 1956, two years after presentation of the 220 a, the 219 and 220 S models were introduced to the public as successors to the first six-cylinder models with ponton-type bodies. The 220 S was considered the direct successor, however, as expressed in the cars internal designation W 180 II. It was largely based on the predecessor model, but thanks to two compound carburettors, engine power had now been increased to 100 hp (74 kW). In addition to being mounted on bearings at the front of the subframe, the engine was given two additional points of support to the rear. From the outside, the only visible difference between the 220 S and its predecessors was the additional thin chromium strips having been added to the beading on the front fenders and doors. Production of the convertible A and C variants began in July 1956; the coupe followed in October 1956.

The other six-cylinder model presented at the same time as the 220 S bore the unusual and less prestigious model designation 219. Known internally as the W 105 series, the model came about as a combination of the 190 and 220 a to a certain extent, its purpose being to win new customers as a significantly cheaper and more basically equipped six-cylinder model. The engine was taken over unmodified from the 220 a, and the running gear, body from the A-pillar rearwards and equipment all came from the 190. But as the six-cylinder engine required a longer front end, this was supplied by the 220 a. Accordingly, the wheelbase and overall length of the 219 were shorter than the 220 S but longer than the 190. 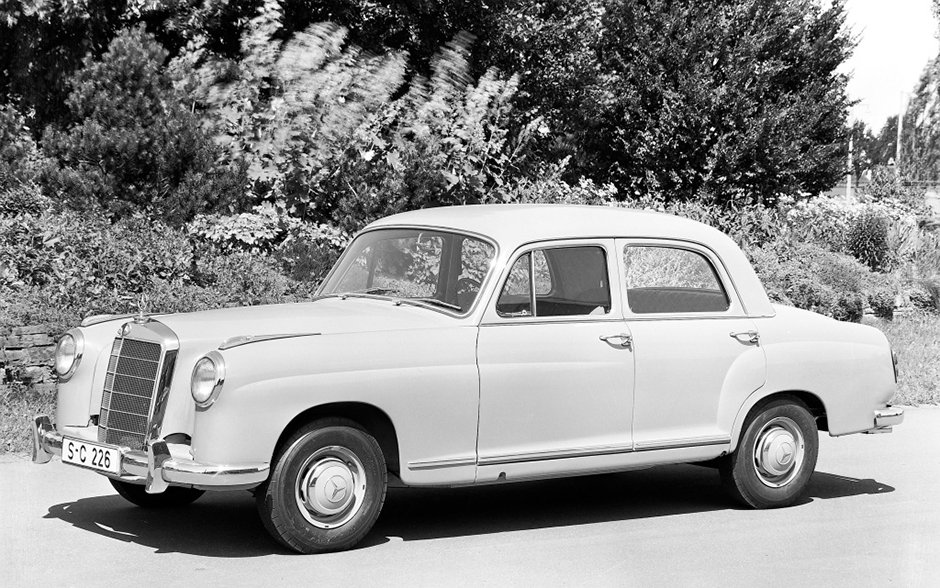 Under the slogan: Even more valuable, but no more expensive, almost all passenger car models were presented in August 1957 with a range of improvements some more obvious than others. Both the six-cylinder ponton-type models were fitted with more powerful engines in which the increased output five hp (3.7 kW) in the 219 and six hp (4.4 kW) in the 220 S was achieved by raising the compression ratio to 8.7:1.

The interior equipment was also modified, as were the front bumpers. These had different fixtures for the license plate panel and additional lateral anchorage points. In the 220 S these additional anchorage points were also a feature of the rear bumper, and the front bumper horns were replaced with the larger design already familiar in the coupes and convertibles. In addition, in line with the four-cylinder models, the license plate illumination was integrated into the rear bumper horns so that the recently introduced enlarged license plates could be fitted without problem.

But the most notable innovative feature was the introduction of the Hydrak hydraulic-automatic clutch, available on both models as an option. The Hydrak system combined a hydraulic clutch for moving off, a conventional single-plate dry clutch for engaging and disengaging during gearshifts, and a freewheel clutch to overrun the hydraulic clutch. 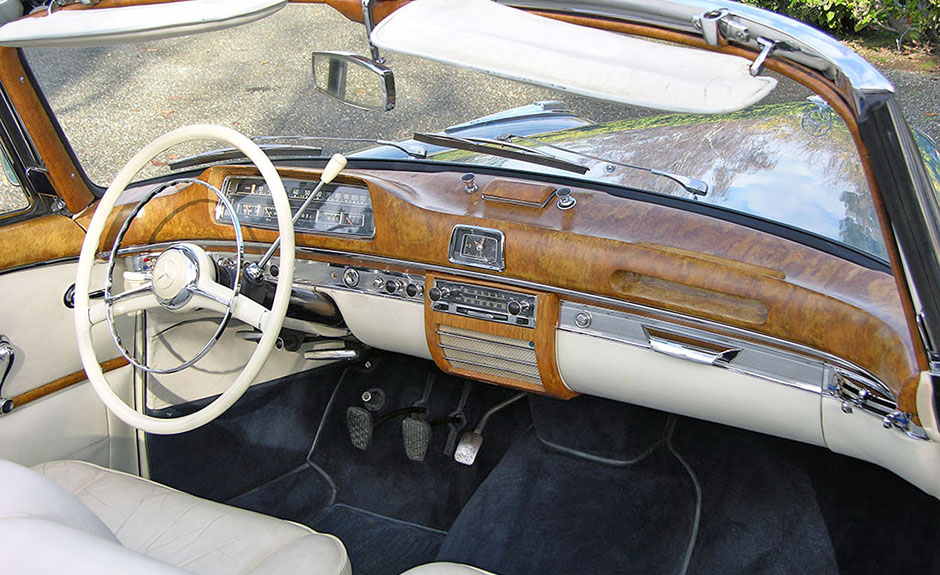 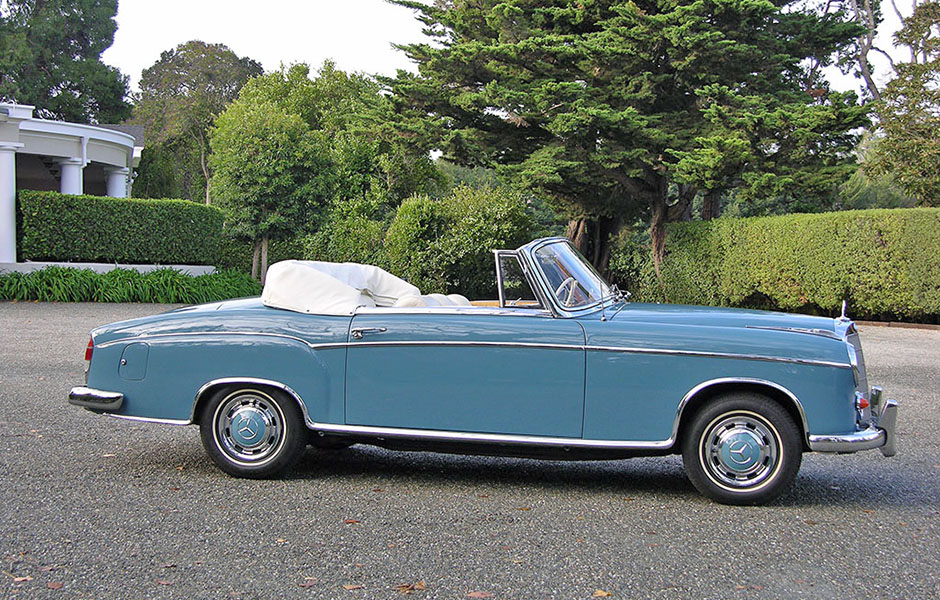 The new six-cylinder 220 SE model was presented in September 1958 and produced from November onwards. Here, too, there were the convertible variants A and C, as well as a coupe; these made their debut in October 1958. Known internally as the W 128 series, it was very largely the same as the 220 S, but was fitted with a modified engine with direct gasoline injection. Except for the mixture preparation, which was taken care of by the same timed manifold injection as in the 300 d, the 2.2-liter unit was identical to the trustworthy 220 S engine, and now delivered 115 hp (85 kW). However, the increase in power output and improved performance with lower fuel consumption were not the only remarkable aspects. So too was its hefty additional price tag of DM 1,900. The Hydrak automatic clutch was also available as an option, though this added another DM 450 to the bill. With these added costs and a short production run of just ten months, the 220 SE was the most exclusive model in the series with just 1,974 units built.

In August 1959 three brand-new six-cylinder models in the W 111 series were introduced as successor models to the 219, 220 S and 220 SE. During the five-and-a-half year production period a total of 111,035 six-cylinder saloons with ponton-type bodies were built. From a strictly design point of view, the ponton-type body was also a feature of the successor models as well as every other Mercedes-Benz saloon built since. Nevertheless, in the automotive language of today the term Ponton Mercedes is reserved exclusively for the original model generation. 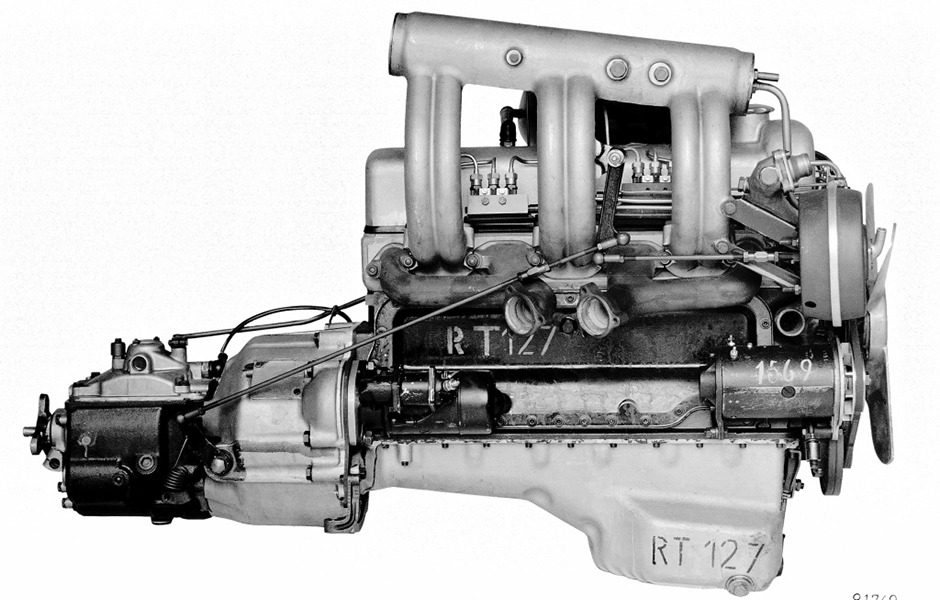 Das Auto, Motor und Sport, Germany, issue 19/1954, on the Mercedes-Benz 220: One of the most distinctive features of this car is its absolute handling safety even at high speeds. Even on the poorest roads it does not pay a moments thought to departing its track, and it takes even the trickiest of corners in its stride, without requiring any particular steering corrections and without any perceptible lateral inclination. […] In addition to its elasticity, the engine of the 220 is remarkable for its exemplary balance and smooth-running, only when idling is a slight vibration detectable.

Das Auto, Motor und Sport, Germany, issue 4/1959, on the Mercedes-Benz 220 SE: This 1,400 kg car (with full tank and radio) is so responsive to the accelerator pedal that it is no exaggeration here to talk of it setting new standards at least as far as any reputable conventional car is concerned. With the typical quiet engine characteristics associated only with 6 cylinders or more, we experienced the sort of driving culture one normally only enjoys in truly large-displacement vehicles.