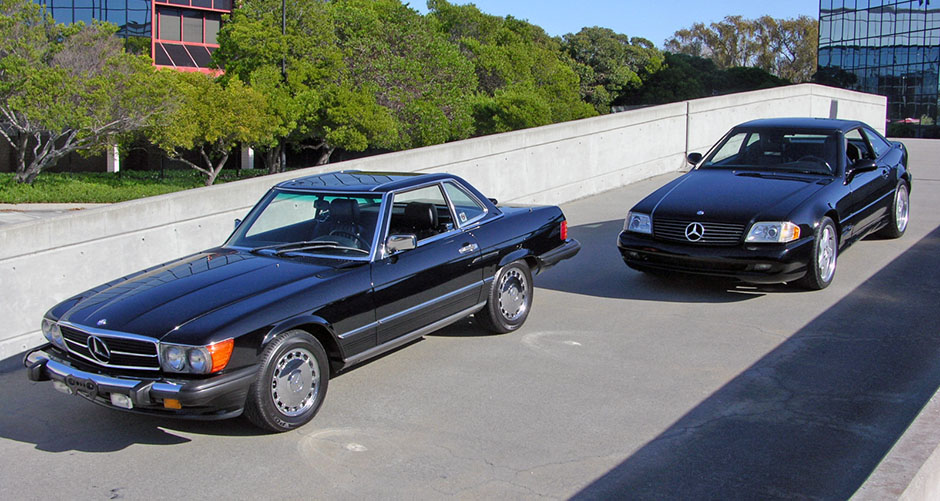 Which SL turns you on?

“The 560SL was THE automotive statement in the late ’80s that shouted, I’ve made it.”

Well, I happen to have in my current inventory a perfect example of this situation, a mint 1988 560SL and a mint 2000 SL500 Sport edition. Interestingly, both have about the same mileage, 55k to 58k, and are priced essentially the same at around $30k. And both are the same color/trim combination, black(040) exterior with black(271) leather. There they were sitting side by side in the warehouse just begging to be compared! Let’s grab some information from my archives and have a look at the cold hard facts.

Scanning the data, you get the impression these cars are on different planets from a performance standpoint. Aside from some heaven sent notion that every SL should sit on a 99 inch wheelbase, these cars couldn’t be further apart. In today’s power-crazed European automobile world, the 560SL’s statistics look fairly pathetic. Mercedes rated the 560SL’s output at 238 HP.  A 1994 E320 wagon makes about the same power although the V-8 generates 50 more ft/lbs of torque. And th0se 15? wheels!

The differences don’t stop there. While a 560SL owner has to wrestle the hardtop off using an array of tools, handles and pawls, our SL500 owner merely extends one well-groomed finger to gently press one button to release the hard top, which by the way, weighs about 20 pounds less than the 560’s. Once the hard top has been removed, that same well groomed finger pressrd the red button in the opposite direction to set in motion the mechanical ballet that is the erection of the newer car’s finely engineered soft top. Very slick.

The 560SL owner must cajole, tweak and swear the soft top into position. Unknown to most of humanity, the 560SL just might owe its very existence to the unforeseen development time needed to perfect the vastly complicated technology for the power hard and soft top mechanisms featured in the 129 models. Remember, a Mercedes model’s usual lifespan had been historically about 8 years. The 107 was constructed from 1971 (very early European 450/350SLs) to 1989, an unprecedented 18+ year model run!

Inside, the 560SL is a model of simplicity with manual seats, fixed steering column, manual passenger outside mirror, fussy seatbelts, and a massive steering wheel. ABS and a single airbag are the only links to today’s safety technology. It really is a step into the past, back to about 1973 actually. 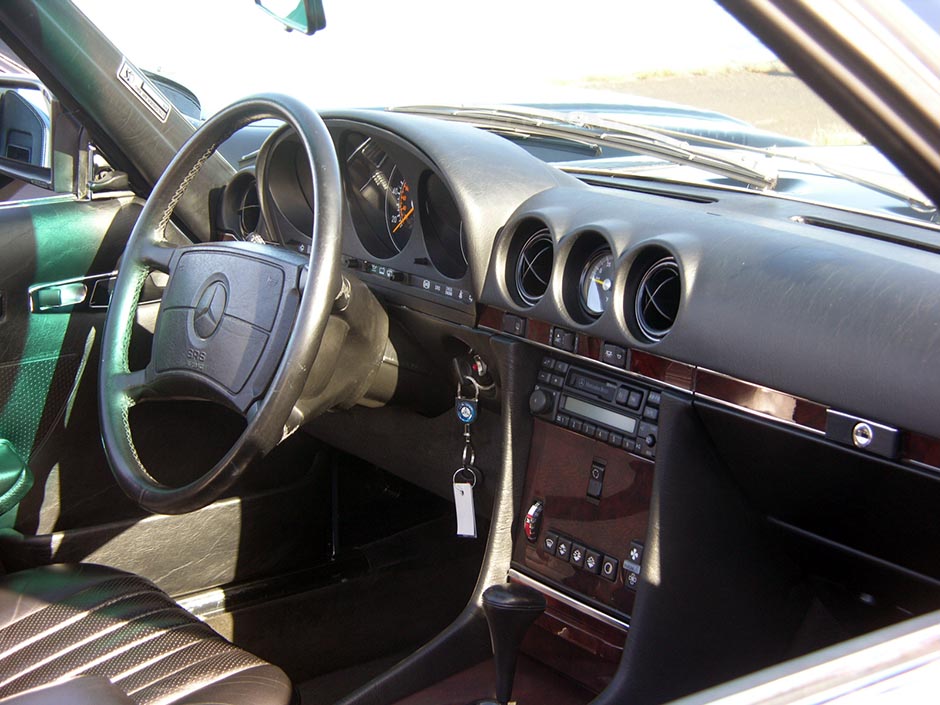 560SL interior represents the ultimate derivative of the 107’s ergonomic functionality and design but was archaic as the ’90s approached. We see a single airbag, burlwood elements, a fixed steering wheel, manual seat adjustment and vinyl door panels! 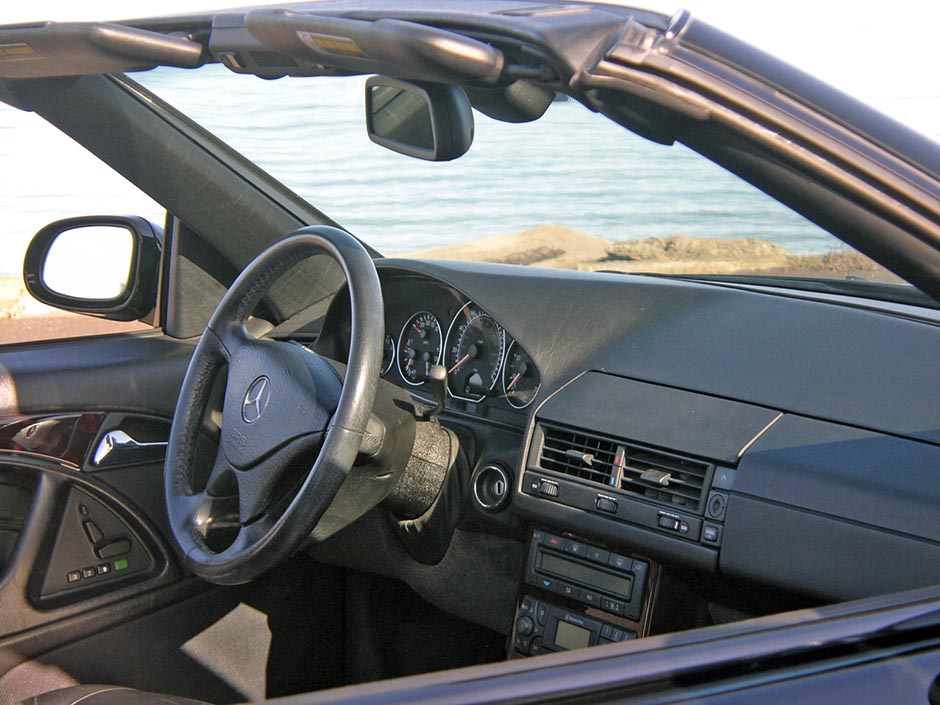 The ’00 SL500 represents the end of the 129’s interior evolution and presents a clean design with an emphasis on crisply executed surfaces. The center console features extensive burl wood surfaces and a usable storage bin that doubles as an extendable arm rest. We see the programmable power seat switch gear positioned below wood element on the driver’s door. Steering wheel is now power adjustable for height and rake. Passenger glovebox has been replaced by a the passenger airbag. Seat belts are now anchored directly to the magnesium seat frames and are adjustable for height. One trait that did not change from the 107 was the generally limited fore/aft seat adjustment. It’s all very stylish with a hint of minimalism.

Eyeballing the two cars reveals their different characters. The bulgy fat tired SL500 seems to discreetly tell you, “yeah, I can be a bit of a bully so stay out of my way.” The 560SL, however, oozes an urbane sophistication pretending to be nothing more than its understated styling suggests; a superbly constructed, handsome icon of the ’80s that is once again becoming a ‘cool’ car to own. Just today, a 20 something fellow stopped by to ogle the black 560 featured here. He was just a toddler when the 560SL was the big daddy of the European boulevard top down cruisers and now he wants to own one.

To understand the appeal of the 560SL, we must look beyond the bald performance facts and technical gizmos this car lacks when measured against the over-the-top 129 cars. There is the intangible factor of a generational identity with these cars that has raised values and demand. The 560SL was THE automotive statement in the late ’80s that shouted, “I’ve made it.” Many of the buyers who are paying attention to the 560SL today remember the lust they felt for that car when it was new.

I should mention the #1 reason clients give for preferring the 560SL over the vastly superior SL500…chrome! Do you remember that stuff? It was pretty common from about 1929 until 1990 and then, poof, it just about disappeared. Look at the 560SL and you’ll see plenty of it. Actually, much of the brightwork is polished stainless steel that gleams just like chrome. People love the face and tail of the 560 because of those jutting rubber encased polished SS bumper structures initiated during the Nixon era and the traditional gleaming grille surround. It’s a look that was burned into their brains during the car’s overlong production life.

While these 107 enthusiasts may not realize it, they also subconsciously appreciate the fabulous build quality of the 560SL . Every item you touch has a robust, finely engineered quality. And the sound of the 560s door closure brings to mind the image of an automobile chiseled form a block of granite. Not so with the SL500 or even a sparkling new SL550. And all the performance gains of the SL500 are largely a moot point. Where can you use that car’s extra power and tire grip?

You’re probably wondering which car I really prefer? Contrary to market trends, I’ll take a Sport edition SL500 over any 560SL. You see, I have to admit to a trace of bully lurking under my placid Yogi-like exterior.

12 years separate these two black SLs. Viewed side-by-side, the 560SL on the right seems almost quaint. Both represent the pinnacle of premium two-top roadsters in their respective eras.