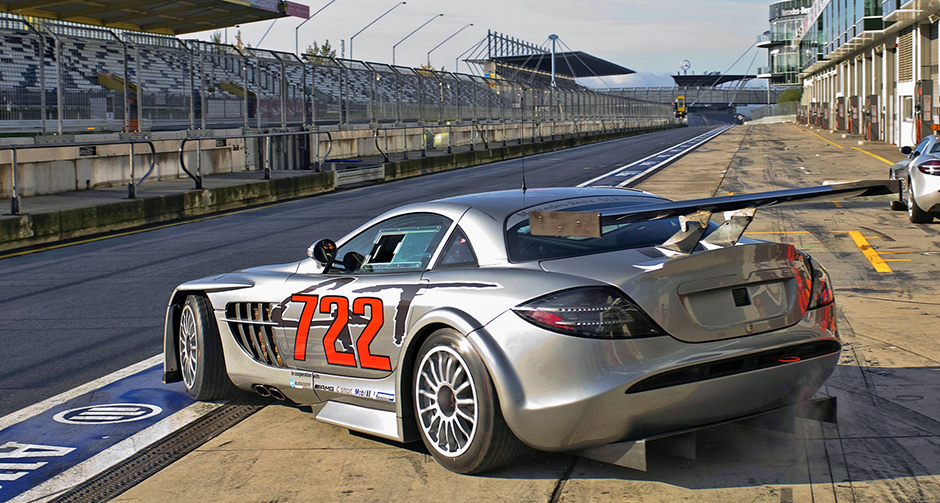 British road racing ace, Tiff Needel, described the street edition of the SLR as “a bit of a handful” a few years ago during a TV track test on an abandoned aerodrome in the UK. As he poured on opposite lock while powersliding a black press car, he commented that while the heavy 617hp SLR may be stiff on traditional road surfaces, it was just not stiff enough to really behave properly on the track.

Well, another British road racing ace, Ray Mallock, has set about revising the latest edition of the fabulous SLR, the 722 Edition, to make it “behave” in the uncompromising arena of GT racing in Europe. Mallock, the man behind the gallant Aston Martin “Nimrod” Group C Le Mans program in the early ’80s, and his company RML are preparing 21 SLR 722 GTs for the chaps in the SLR.CLUB.

What you say is the SLR.CLUB? Founded in 2006, it’s a Mercedes-Benz sanctioned club that brings SLR owners together for track days and professional instruction on how to utilize the SLR’s massive speed and handling capabilities under the controlled conditions of a proper race track, usually Le Castellet in France. An “SLR Safety & Speed Academy” shortly after the Monaco GP this year saw Red Bull F1 pilot, David Coulthard, giving private instruction to the assembled SLR owners. Other “name” instructors include Klaus Ludwig and Jochen Maas. 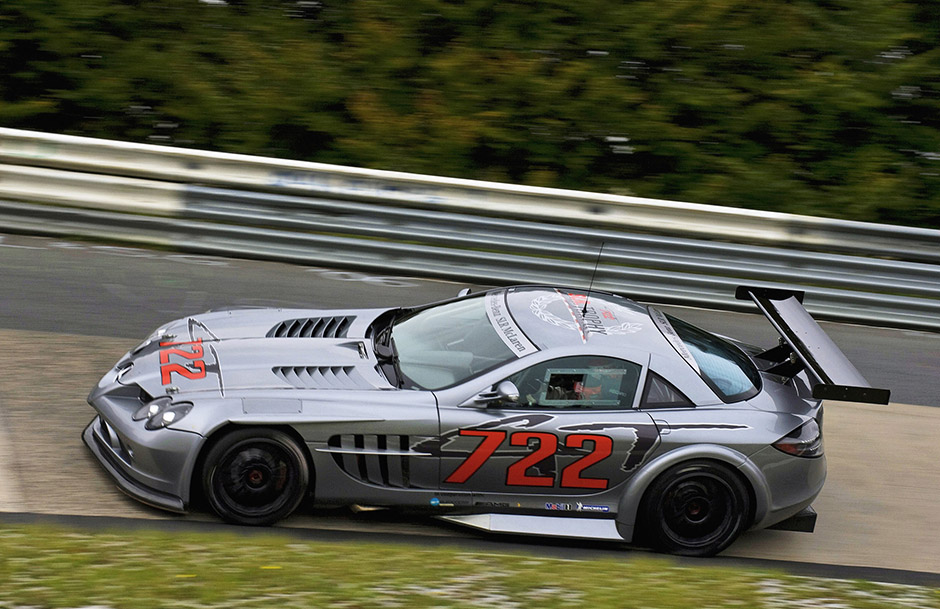 The skirted, winged and lightened 722 GT looks right at home whirling around the Nurburgring’s ‘carousel’ during test sessions. 21 will be constructed for members of the rather exclusive SLR.CLUB.

As an owner of a 125cc shifter race Kart, I was happy to hear the first order of business during one of these SLR “Driving Experiences” was to plant all the owners in high performance Karts to familiarize them with the dynamics of extreme performance driving situations. Excellent idea!

The outgrowth of all this track time is a small racing series for these new 722 GTs. Similar to Ferrari’s “FXX” program, it will likely be an “arrive and drive” program whereby the GT owners arrive at a particular track, are handed driving suits/helmets and led to their idling 722GTs. I have to applaud manufacturers who build potentially lethal ultra-high performance street cars taking the time and effort to coax their users to actually learn how to cope with the massive capabilities the cars provide under fairly controlled conditions.

Among the 400 modifications noted by RML to the base SLR 722 we see:

No prices have been released but the hot rod 722s are bound to be far less expensive than the $2.5m Ferrari FXX owners are asked to pay to play with their cars.