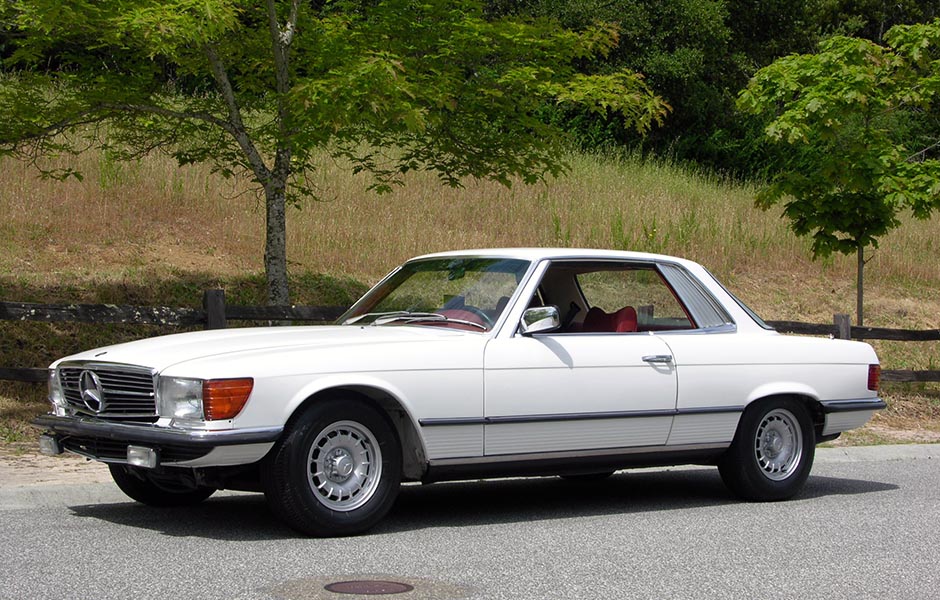 One very enjoyable aspect of operating L.R. Spencer Co. is I often stumble across cars that we decide to save from being allowed to simply deteriorate to a point from which no one will spend the time or money to bring it back to life.

Perusing the local classifieds a few months ago revealed a 1976 Mercedes 350SLC European edition equipped with a 4 speed manual gearbox. We’re eternally on the look-out for any V-8 107 chassis with a manual gearbox, SL or SLC. We’re also eternally pessimistic regarding the condition from a rust and general neglect standpoint of any Euro SLC. Most have just fallen to bits and are rarely useful even as parts cars. Due to the fact this particular SLC was fairly close to my office, I put the pessimism aside and took a drive over to the small independent dealer that owned the car. 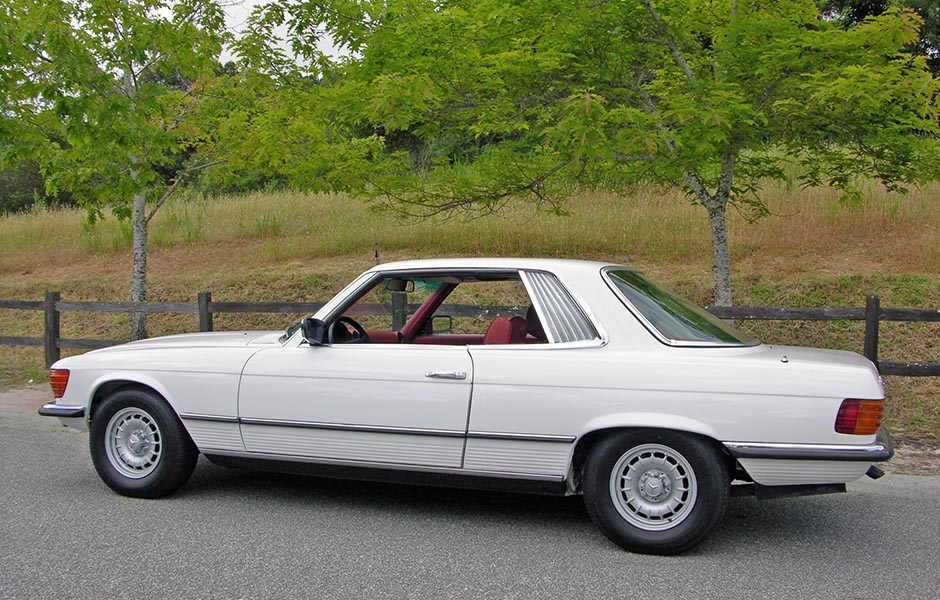 The car was sitting against the back wall of the lot covered with grime and looking fairly sad. My usual inspection revealed flat paint, some rust on the front fenders above the headlight doors, destroyed alloy wheels on throwaway tires, but a lovely interior with recently replaced leather in the correct color and material. The interior quality was a ray of hope. I even found the handbooks in the glove box with some early service stamps from Germany.

A closer inspection of the structure was encouraging. I found no accident damage, the doors/trunk lid and front fenders had never been tampered with and the undercarriage was absolutely solid. The relative absence of rust is likely due to the car coming to California early in its life, the old California title indicating at least 21 years in the state. All the shut lines were as they came from the factory, tight and precise. I decided the car was worth a drive. Actually, I would have driven this car if it was absolutely destroyed because I’ve never driven a 107 chassis V-8 with a manual gearbox! Yes, I’m fairly easily amused!

What a blast! I found excellent oil pressure, lovely gearbox and clutch action coupled with a silky smooth V-8 that was willing to rev to the moon…or at least to 6,800 rpm. There were no worries about non-functioning sunroof, tepid AC or jerky cruise control. This SLC wasn’t equipped with any of this stuff! I found power windows, power steering and a non-functioning power antenna. Period. 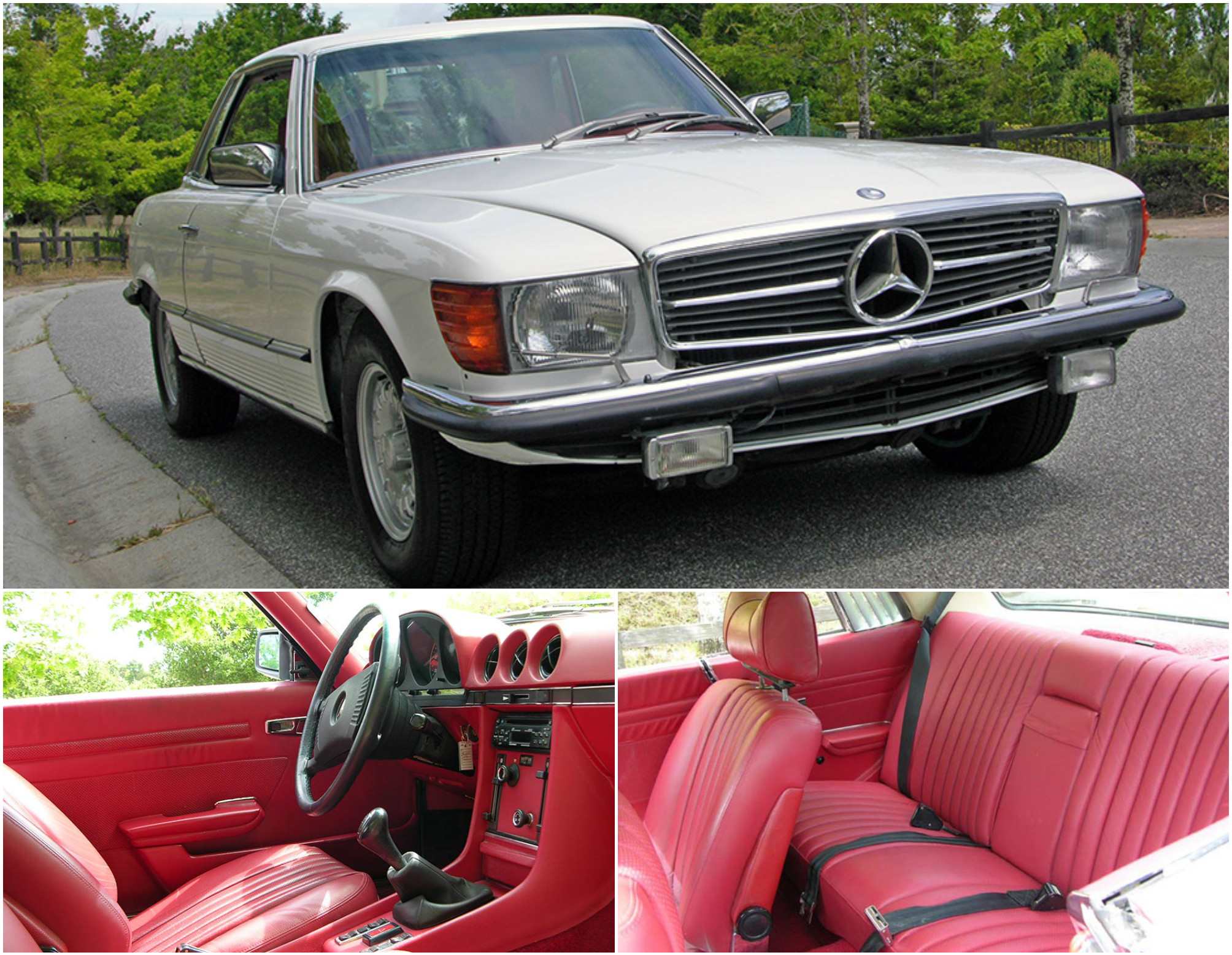 European headlamps with washers and short bumpers identify this SLC 3.5 as a European specification model. Excellent recently restored leather and flawless dash pad prompted me to save the car.

I thought to myself; I have to rescue this car. So, I bought it. The 350SLC was built in fairly small numbers with about 671 units being produced worldwide in 1976, none coming to the US. We received the accessory laden 450SLC in the states. The car sold in Europe for about 43,000 DM. My interest in this car revolved around less weight and the lively driving that the manual gearbox would invoke and, of course, its rarity. We’d never seen one before!

As usual, the transformation from neglected used car to what you see now was rather more costly than we anticipated. A full respray was in order and we needed to replace all the side moldings, located and powder coated a fresh set of wheels, fitting them to fresh tires. New door seals and sundry other details were taken care of as well. We did, however, have to strip and repaint the dreaded silver glass enclosed side window vane assemblies. Removing these items is a major operation and we’re not looking forward to doing it again! With the rear window regulators exposed during this repair, we attended to these as well as we could. The rear windows now work reasonably well. 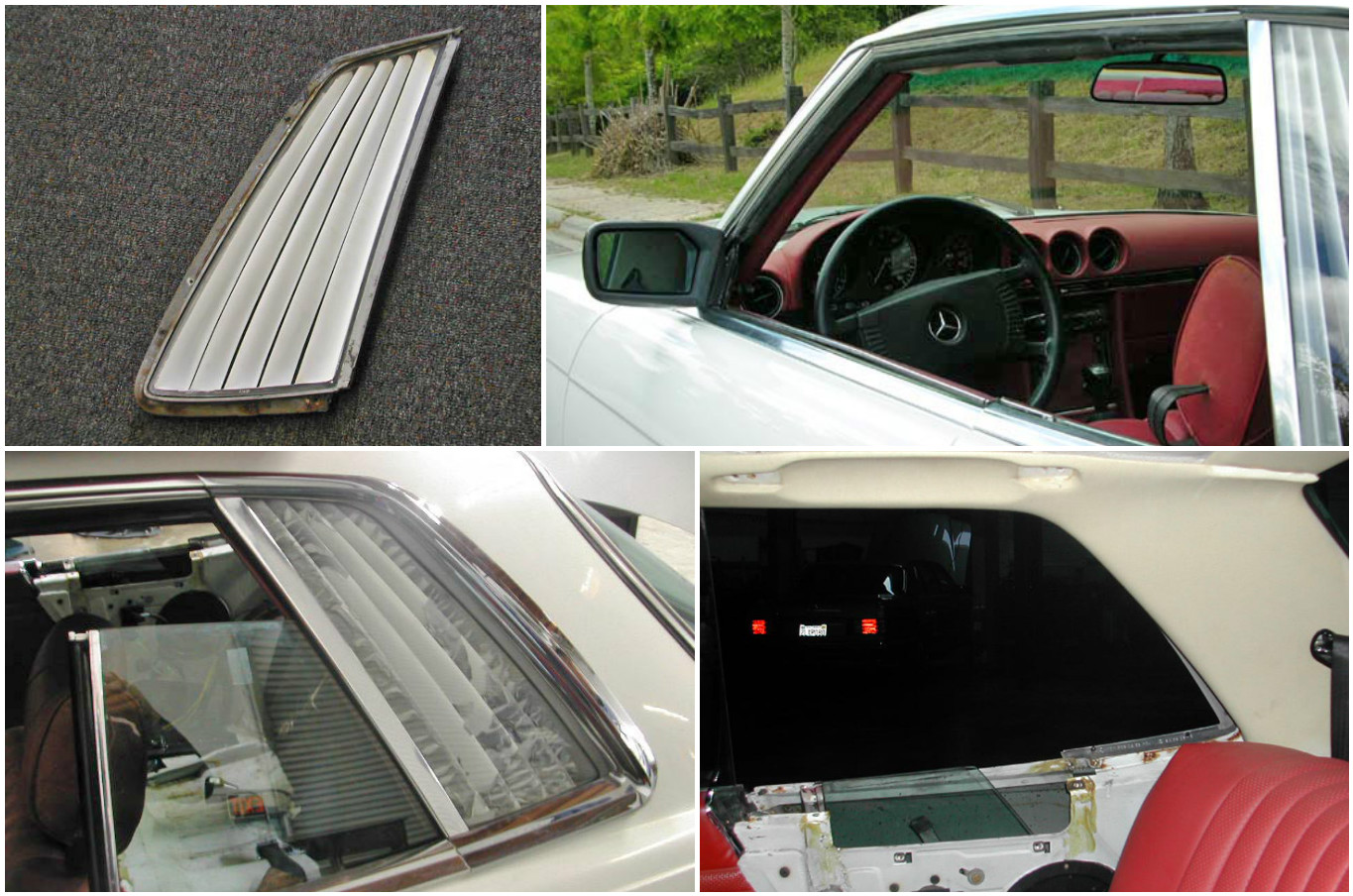 The SLC’s rear side window vanes are prone to sun damage and mar the car’s appearance. The plastic vanes are trapped within double-pane glass assemblies. Removing them is tedious but once restored they significantly improve appearance.

Wanting to find out just how much lighter this car was than the US specification 450SLC prompted us to carefully weigh both cars. Our mint 1978 450SLC weighed 3660 lbs and the 350SLC weighted 3380 lbs, a significant 280 lb lighter! And just as important, the weight split front/rear for the 450 was 2060/1600 and the 350 was 1880/1500. The weight difference comes largely off the front of the 350 making it a nicer car to drive aggressively. I briefly considered lowering it and installing a nice exhaust system but didn’t want to erode what is actually a very correct and now sparkling 350SLC. With dual exhaust and low restriction mufflers, the MBZ V-8s sound much like small block Chevy V-8s!

The car handles very well but you need to pay attention to the sensitive power steering. This makes it slightly tricky to place the car correctly and hit apexes accurately when pushing a bit. With its notchy precision, the gearbox is very nice to use and, coupled with a 3.64 final drive ratio, gives the car a fairly relaxed feel touring at 80 mph. The engine is a free-revving joy returning a muffled howl when you lean on it. And torquey as well. It will pull away from 5 mph in 3rd gear with no interruption and, with a little finesse, can be brought almost to a stop in 2nd gear before moving.

Keep in mind these figures were achieved with no serious abuse of clutch and driveline.

The SLC is a far more harmonious shape minus the US mandated 5 mph bumpers. The tidy original Euro style bumpers combined with the flush Euro lamps complete what I feel is a handsome car. It is the ideal affordable classic for the family guy or gal that wants a fun, inexpensive Mercedes Coupe that will accommodate children. I guarantee anyone who shows up at a Mercedes event in this cool SLC will turn many a head! 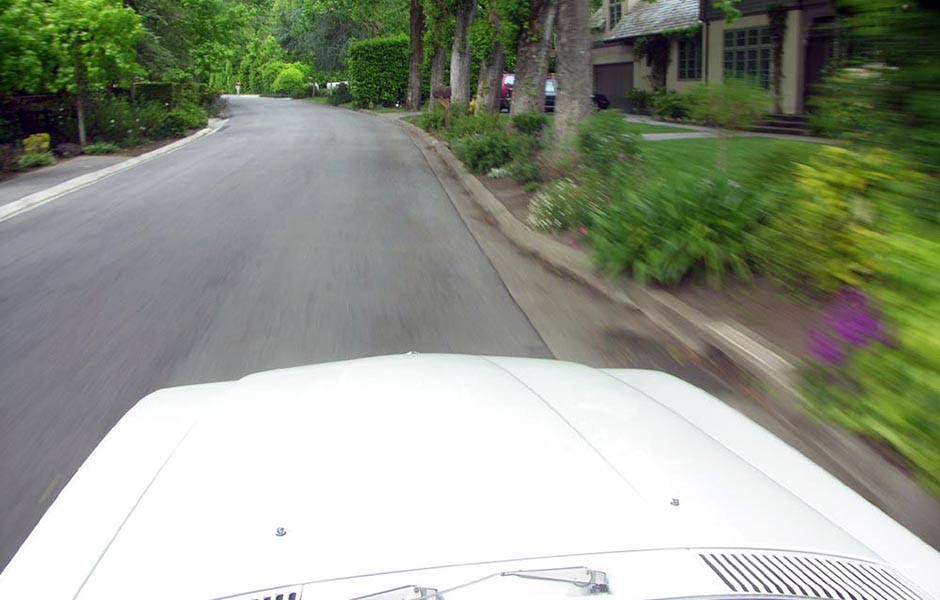