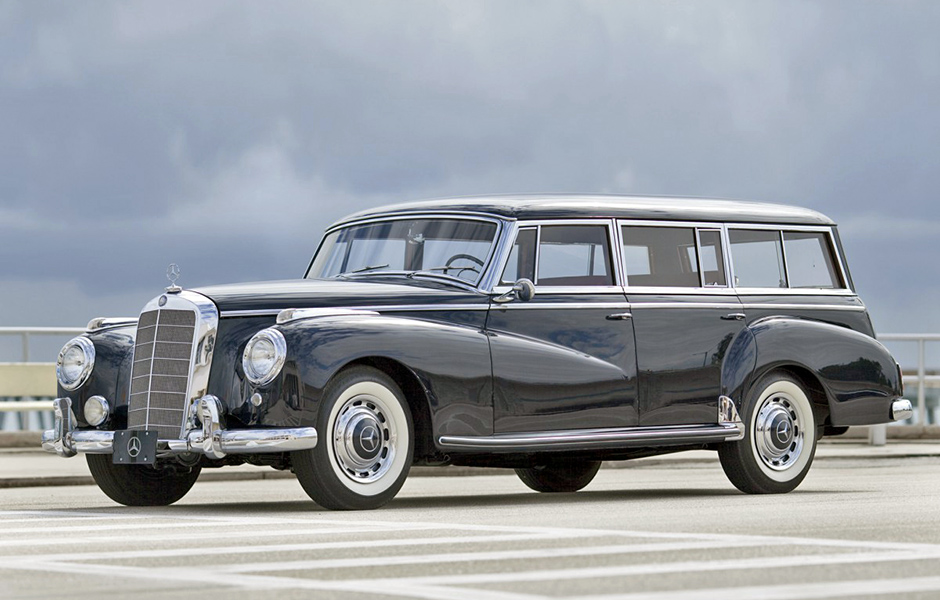 In 1956, Mrs. Caroline Folke enjoyed a tri-coastal life with homes in Paris, New York and Palm Beach, Florida, and that year, she walked into the New York City Mercedes-Benz dealership with a most unusual request: a new station wagon. While this is a rather commonplace order today, no such car was available in the Mercedes-Benz lineup during the 1950s. This was far from a standard model, however, Mercedes-Benz dealerships in the 1950s were eager to please, especially as they were selling expensive product during challenging times for the company.

After some clever research, a new 300 C sedan was ordered and, according to various accounts, it was shipped directly from Stuttgart to the Binz coachworks company in nearby Lorch, one of the few remaining custom coachbuilders in Germany. Known for constructing ambulances, hearses and other commercial vehicles on smaller Mercedes-Benz chassis, it was a fitting task to create an exclusive station wagon for Mrs. Folke.

According to famed Mercedes-Benz restorer Bob Hatch, the Binz craftsmen most likely removed the entire roof, as well as the standard bodywork, from the front doors back. A one-piece roof panel was then cleverly fabricated, as was a new rear section complete with a handsome wagon tail, folding rear seats and two-section tailgate. To create a seamless fit, the original rear doors were substantially modified and exquisite vent windows were incorporated to allow for reasonable ventilation. 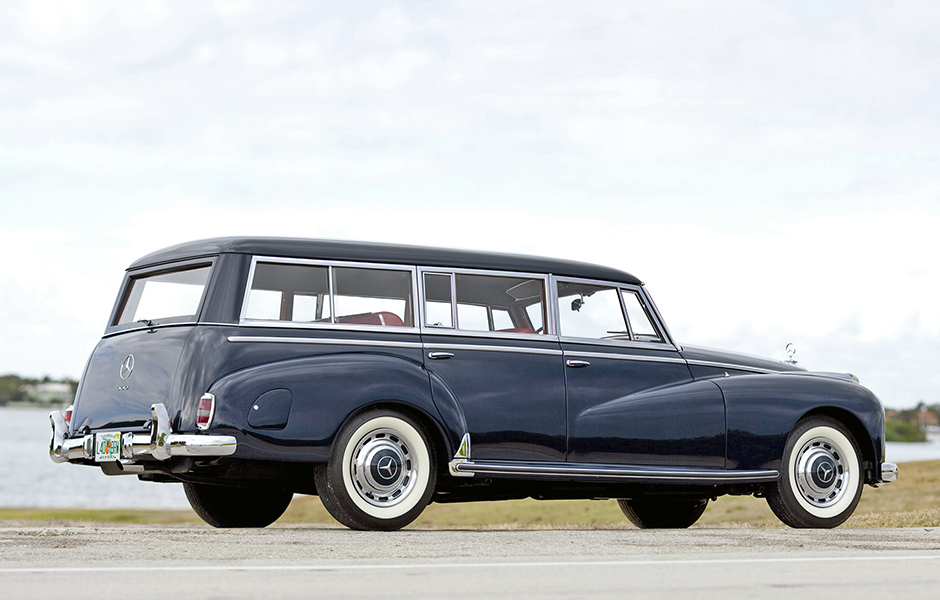 Legend has it that Mrs. Folke was so fond of her splendid wagon that she had it shipped by air from home-to-home as she would travel! Years later the car was sold, eventually coming to the attention of Bill Patton, a car collector from Orange County, California. It remained with him for many years before being sold to collector Charlie Crawley. In Mr. Crawley’s care, the car was repainted in its current shade of midnight blue, a striking complement to the red leather interior. 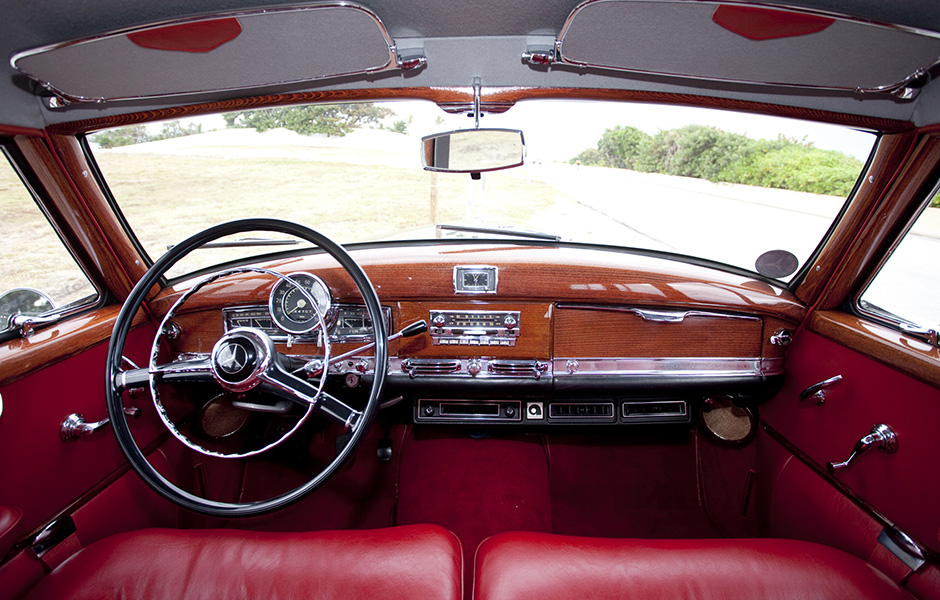 A view from the helm. Standard 300c appointments here with the exception of aftermarket AC unit. Introduced in September 1955, the 300c offered an optional Borg-Warner 3 speed automatic transmission – an essential addition to an otherwise highly opulent luxury sedan.

Approximately ten years ago, the unique wagon caught the eye of its current caretaker, a collector with an interest in one-offs, fascinating designs and quality craftsmanship. After having purchased the 300 C, it was sent to renowned Mercedes-Benz specialist Hatch & Sons, who were commissioned to complete a partial restoration. What ensued was the removal of the engine and interior, a thorough engine bay detailing, a mechanical rebuild and an interior restoration. Once completed, the magnificent Mercedes-Benz was shown, for the first time in many years, at the Amelia Island Concours dâ€™Elegance where it was well received. Over the past decade it has benefited from the attentive care of its owner who has lovingly looked after and enjoyed this remarkable piece.

Traditional Coachbuilding at its Best

This one-off station wagon is surprisingly architectural in its features, a masterpiece of modern coachbuilding and German workmanship. The interior is magnificent and a superb example of the quality and attention to detail that typifies this car. The wood grain surrounds the cockpit and extends across the dashboard, on the doorsills around the flush-fitting chrome window frames and even surrounding the windscreen. The instruments and hardware are also impressive in their quality and spectacular in design, and the front compartment is generously equipped with a Becker Mexico radio, in-dash clock and an optional air-conditioning system, a necessity in the humid Palm Beach climate where Mrs. Folke regularly spent time. The passenger compartment and luggage area are similar in their deluxe appointments (wood grain door caps, storage nets and rich leather) and are meticulously finished with chrome hardware and thick carpets. Inside and out, the car remains in marvelous condition and is sure to impress the most discerning set of eyes. 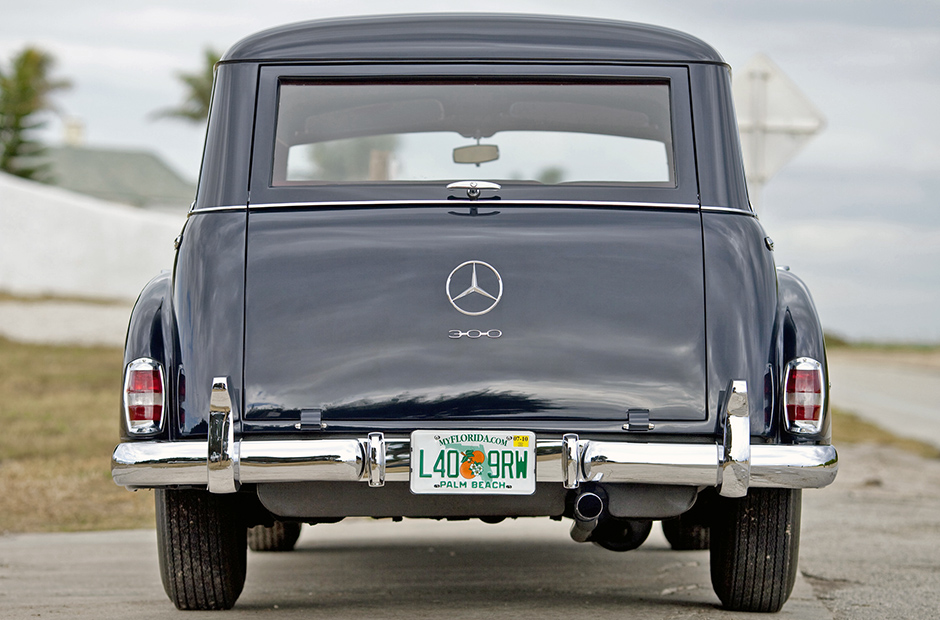 An impressive presence on the road ferrying its occupants and supplies to the summer house. This wonderful 300 sold at Gooding & Company’s Amelia Island auction 2010 for $242,000.

A 300 of unusual grace, style and distinction, this custom Binz-bodied wagon is a prize for Mercedes-Benz collectors as well as those who appreciate rare and unusual designs. It will amaze the crowds at high-end concours and Mercedes-Benz club meets and is still quite capable of acting as an exclusive town car, just as Mrs. Folke imagined it would back in 1956.