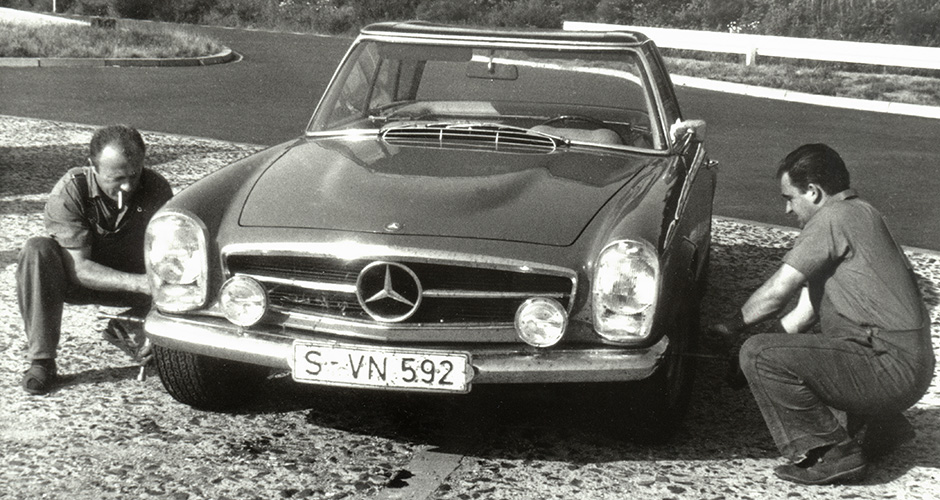 If there is a complaint to be leveled at the charming ‘Pagoda’ series we would have to agree the entire range – 230/250/280 variants – was decidedly feeble in the horsepower department. Producing 150hp when introduced in early 1964 and finishing with 175ish in 1971, the 113 series certainly did not continue the power arch of the 198 series 300SL during its nine year production run. The end of series 1963 300SL produced roughly 235hp in alloy block, sport cam configuration and one would have expected MB to increase power with the 113 series SL introduced at the Geneva Salon March 1964.

It was not to be. The 300SL was destined to stand as an exclusive, low production supercar, an outlier so to speak relative to Mercedes’ historical mass production series sequences. The 113 cars were to be mass produced, user friendly grand touring convertibles featuring segment defining construction quality, exceptional road manners and conceived to vastly outperform the outgoing 190SL, the 300SL’s cosmetically related little brother. However, rumors have persisted over the years of a bastard 113 SL being constructed with an M100 6.3 liter wedged into its narrow engine bay.

” After nine laps on the north loop, the front tires were worn out; the rear tires needed 16 laps.” 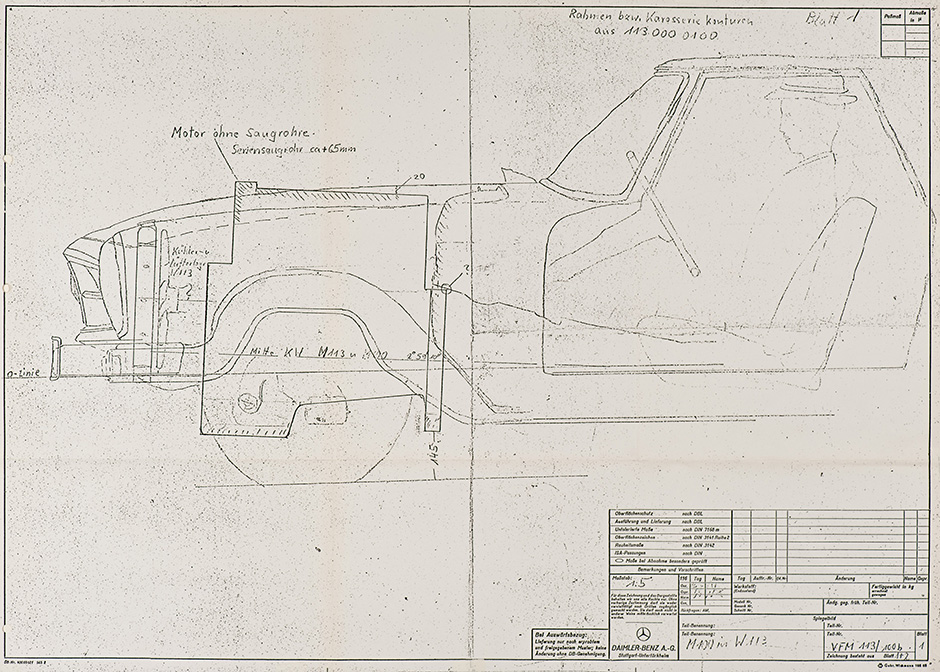 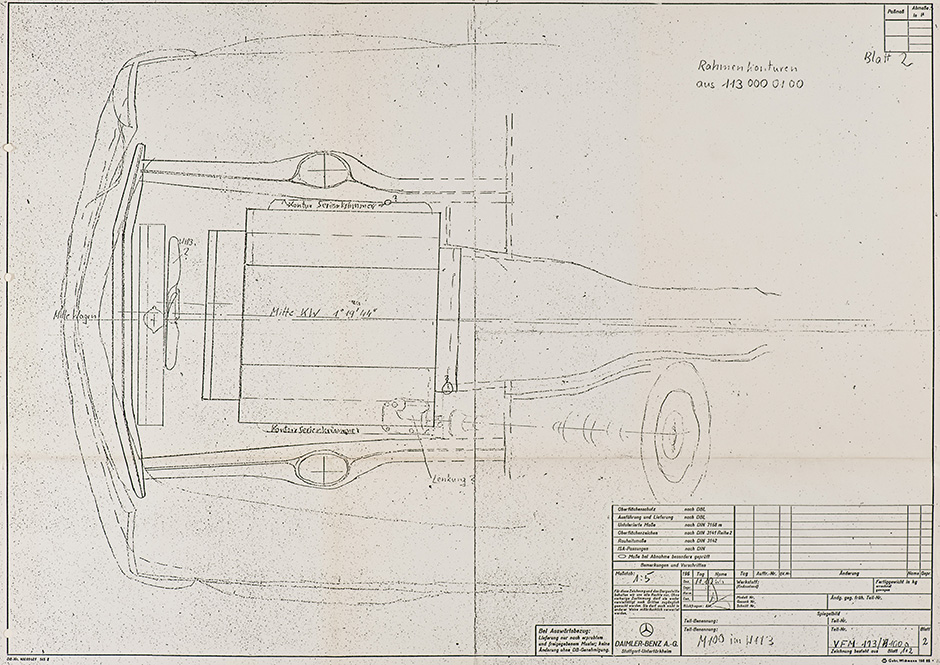 Yes, it fit but the massive 6.3 engine left not a millimeter to spare in the Pagoda’s engine bay. Plug changes must have been interesting.

The story relating Erich Waxenberger’s clandistine project of shoehorning a 6.3 liter V8 into an air suspension 300SEL to pique production car director Uhlenhaut’s interest in a high performance full size saloon is well known, Waxi’s 113 SL project is less so. Thanks to Daimler Media we now know Waxenberger and a small entourage performed high speed road tests with three unusual automobiles at the Nurburgring between July 3 and July 7, 1967. The trio consisted of two 108 sedans fitted with 6.0 liter M100 pilot engines – one of which was uprated to 350hp and each fitted with ZF 5-speeds – and a lone 113 SL fitted with a full 6.3 liter spec engine mated to an automatic gearbox.

The air compressor sitting on left side of the engine was removed for the 113 install. This is what it took to create about 300 HP in 1964 – 6.3 liters housed in a cast iron block fitted with mechanical fuel injection. Injection pump was located in the center of the ‘V’.

Grinding around the ‘Ring’

The serious business centered on refining the specification of the upcoming production 300SEL 6.3 – sadly never produced with a 5-speed ZF box – but the quick laps were aboard the SL with Waxenberger clocking laps in the 10:40 to 11:00 minute range. (The current production car lap record is 7:12.13 set by a Viper ACR in late 2011.) How I would have loved to ride with Waxenberger that day! Or maybe not. The understeer would have been terrifying and notes from the test confirm this, “After nine laps on the north loop, the front tires were worn out; the rear tires needed 16 laps (to fail).”

Despite stiff shocks, massive negative rear camber and Dunlop 5.50 M 14 racing tires, Waxenberger noted “severe instability when braking for bends.” For any Pagoda owner whose driven their car aggressively, this tail happy trail braking oversteer is familiar.The experience of arriving at any bend much faster than a standard Pagoda with an extra 15o lbs sitting in the nose of the car would be…well, terrifying.

Where is this monster 630SL today? Is it hidden in the bowels of the Mercedes Classic Center under a fitted cover? Unfortunately not. Our media release continues, “Despite this promising(?) debut, the development of the powerful SL was not continued to the production stage.” The one-off SL was unceremoniously scrapped. That hasn’t stopped a few adventurous MB gearheads from installing 6.3 engines in some Pagodas. We would have to wait for spring 1971 for the arrival of the first production SL fitted with a V8, the 107 series SL and until 1990 for an SL (129 series) to be produced that exceeded the power of the 1963 300SL. If you’re intent on owning a V8 Pagoda and aren’t capable of building your own, Hatch and Sons’ 280SL 3.5 GT might just be the car for you.