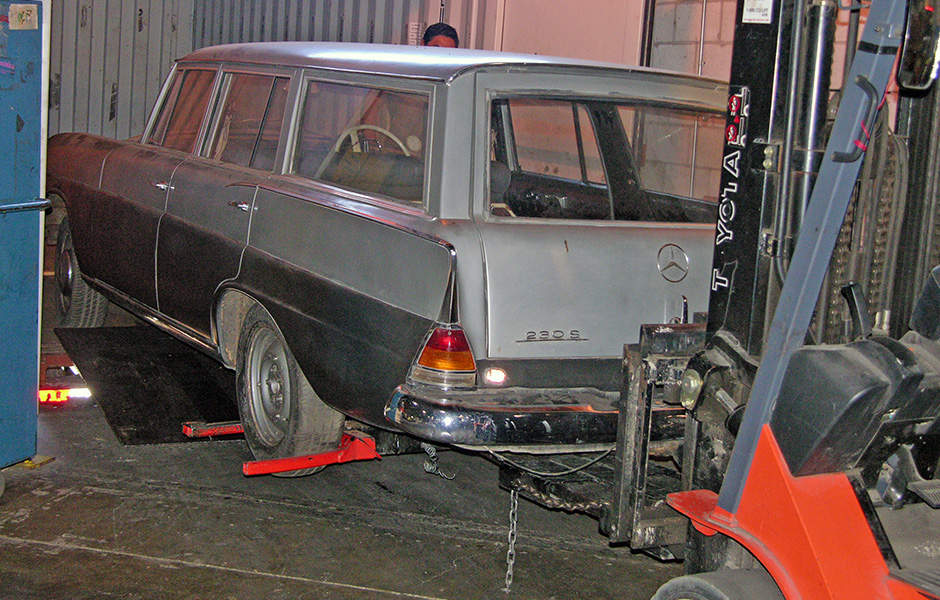 After 90+ days and 14,587.64 miles at sea our Zimbabwe barn find Universal Wagon is gently eased out of the container. The engine was lashed to a stand behind the wagon during the voyage. Despite minimal efforts to secure the rolling chassis, no damage was incurred during the trip. Frozen rear brakes no doubt helped.

It began with an innocuous email on August 19, 2011 that read, “Have 230S Fintail Wagon, 1966, RHD, 2 Tone silver grey, Grey upholstery Orig A/C, Twin carb . In Bulawayo, Zimbabwe. Has been in storage for 12 yrs, but immediately runner. Can be shipped in 6 M container ex Durban RSA. Buyer to arrange and pay ocean freight etc.” While I was very pleased to be offered an exceptionally rare IMA 230S Universal wagon, the notion of extracting it from Bulawayo seemed to be a non-starter.

Purchased near Bulawayo, Zimbabwe during the early ’70s from an nickel mine employee by the now 76 yo M.D of a paving company, Mr Alan G-W, this 230S provided safe motoring over primitive gravel roads to inspect airfields under construction throughout the country. The wagon replaced Mr. G-W’s 230.6 114 chassis sedan as it was “too skittish on loose gravel” with its narrower track and 14? wheels. The stout Belgium built S-class wagon with its heavy duty suspension and 15? wheels served him well for many years.

“Summing all the shipping fees excluding US import fees brings us to a mere $9,930.85 to transport the fin to sunny California, and certainly a better life compared to her probable fate in ZM. Total distance traveled? 14,587.64 miles.”

Pushed off the road by a local registration issue, Mr. G-W’s cherished wagon saw little use for some years. Prior to placement in a container 12 years ago to survive the region’s torrential rains, this two-tone fin was ‘on the button’ and according to Mr. G-W, “The engine runs like a sewing machine and attains full oil pressure as soon as the starter is engaged.” In a week or so we’ll have a chance to see just how his cherished ‘Silver Bullet’ runs once engine is reunited with chassis. 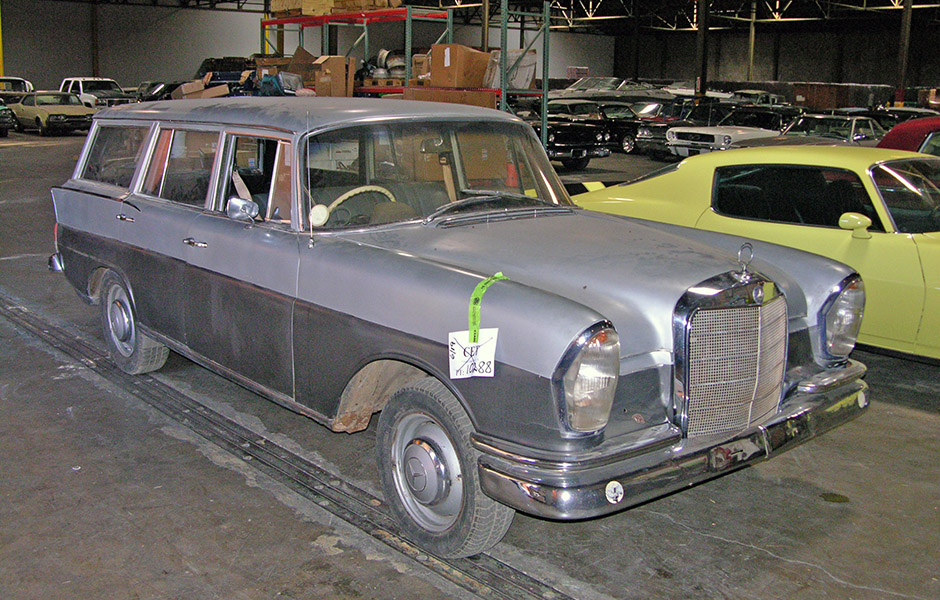 How does one get a fintail wagon from Bulawayo, Zimbabwe to Oakland, CA? It’s a cinch: You first remove the engine from the car enabling shipment as “Mercedes-Benz body only plus one Mercedes-Benz engine” to avoid import/export issues and costs within Africa, and secure these items in a 20? container. Next, load the container on a rail car for the 887 mile ride to the port of Durban, South Africa. The container then hangs around the port waiting for a ship to…China. After completing this 5,244 mile leg to China aboard the Melissa, the container hangs around waiting to hitch a ride to California, in this case aboard the Altair. Oakland, CA is now just 8,457 miles away. 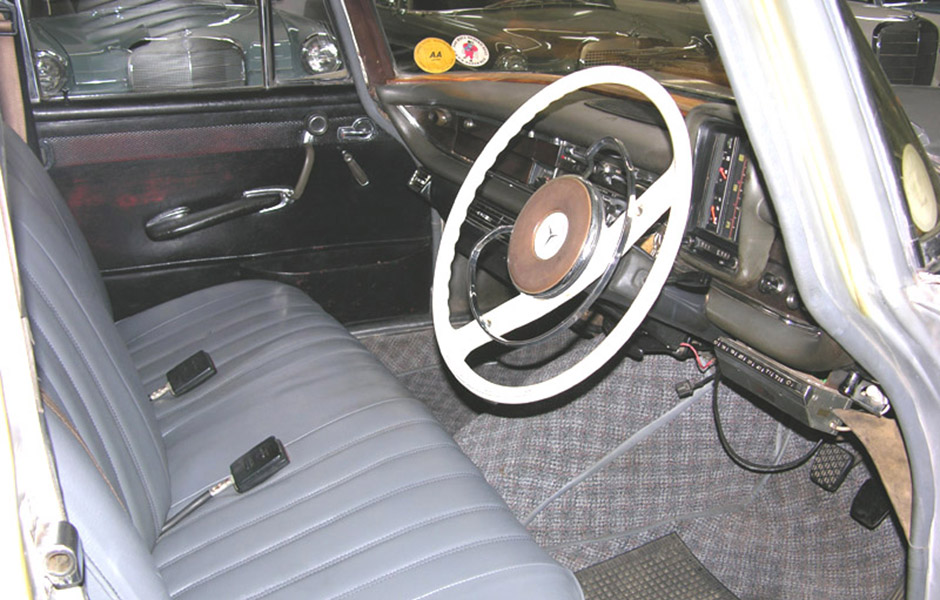 Suspicious about the contents of the container, Customs agents in Oakland, Ca demanded an ‘Intensive Inspection’ in addition to the standard scan. Satisfied the tatty fintail wagon posed no security threat to the US, agents released the container. This exercise cost me an additional $970.20.

What did this odyssey cost? Summing all the shipping fees excluding US import fees brings us to a mere $9,930.85 to transport the fin to sunny California, and certainly a better life compared to her probable fate in ZM. Total distance traveled? 14,587.64 miles.

Back on the road soon

Our plan is to return Mr. G-W’s Universal wagon to the road. Of course, the first step will be to install the engine but we’ll likely take advantage of the engine being out and renew the clutch, replace engine seals, install fresh water pump/belts/hoses, renew ignition components and have a look at the Zenith carbs. All brakes will have to be refreshed and all fluids changed. Once back on the road, we’ll put together an in depth look at this most interesting 230S.

The datacard seems to have been issued by IMA as well and reveals little information about paint, trim, accessories etc. Engine number is noted by ‘see below’ and we haven’t been able to fully translate the notation under paintwork (lackierung). Text in the upper left corner is IMA’s address in Belgium. It’s all very intriguing. 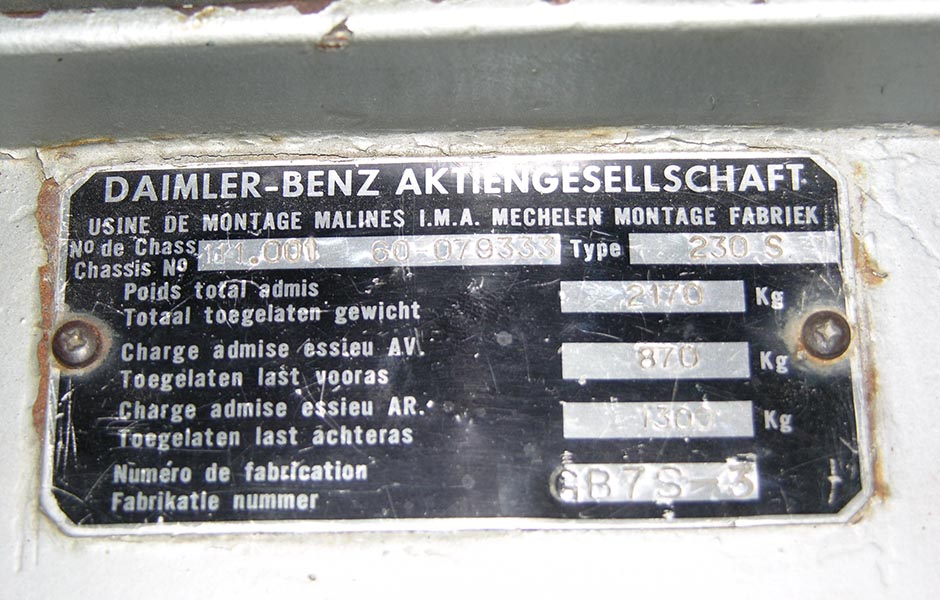 The Universal’s VIN plate seems to have been issued by IMA. Text is in both French and Dutch. ID number is unique to the wagon and bears little resemblance to typical 111 series ID number. This fin is a 111.001 series Mercedes-Benz.