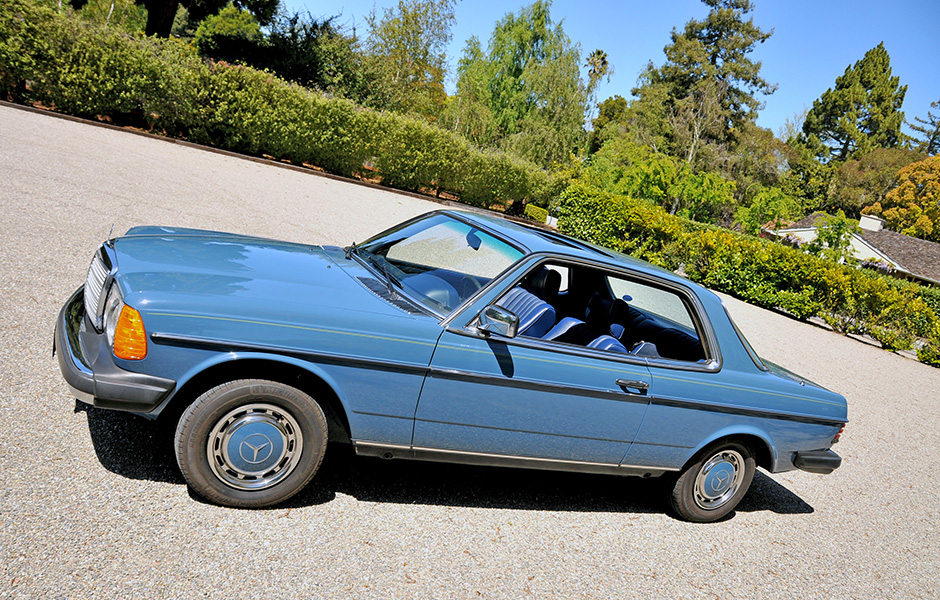 Was there a more harmonious Mercedes design in the latter ’70s? I don’t think so. We tend to overlook the purity of the 123 Coupe design. That Mercedes-Benz would lavish such a beautiful design on a diesel was extraordinary at that time. This 903 blue 1978 300CD (Coupe Diesel) is a spotless 75k mile example.

Focus: 123 Coupes
A most stylish Diesel

If you strolled into a North American Mercedes-Benz dealership in the late ’70s, you would have been presented with a refreshingly simple array of models, just eleven different models. The factory ethos of ‘the standard by which other cars are judged’ was globally recognized and not simply disingenuous marketing gibberish.

The model lineup was diverse for the day, ranging from the frugal 62hp 240D to the 250hp flagship and vehicle of choice for Formula 1 drivers and titans of industry known simply as the 6.9. If you were after a two door fixed head coupe, your choice was either the 450SLC or one of the down market coupes, a 300CD or 300CE.

“Early CDs were not blessed with the new for 1978 turbocharged 5-cylinder diesel but soldiered on with the 77 hp non-turbo version.”

The SLC was a compromised design, one constrained by the basic architecture of the car it had to share its platform with, the short wheelbase SL introduced in latter 1971. Stretching the SL’s coachwork to accommodate four passengers under a fixed, pillerless roof resulted in a less than harmonious shape.

In fact, the SLC’s design had to address the quirk of the quarter panels not being able to fully accept the available side window dimensions when the windows were lowered. And so the designers installed a slatted, glassed-in ‘plug’ to essentially thicken the C pillar and allow shorter rear windows that would fully retract when lowered. It was a bit of visual trickery that unbalanced the design despite the slight kick-up of the perimeter window base molding. 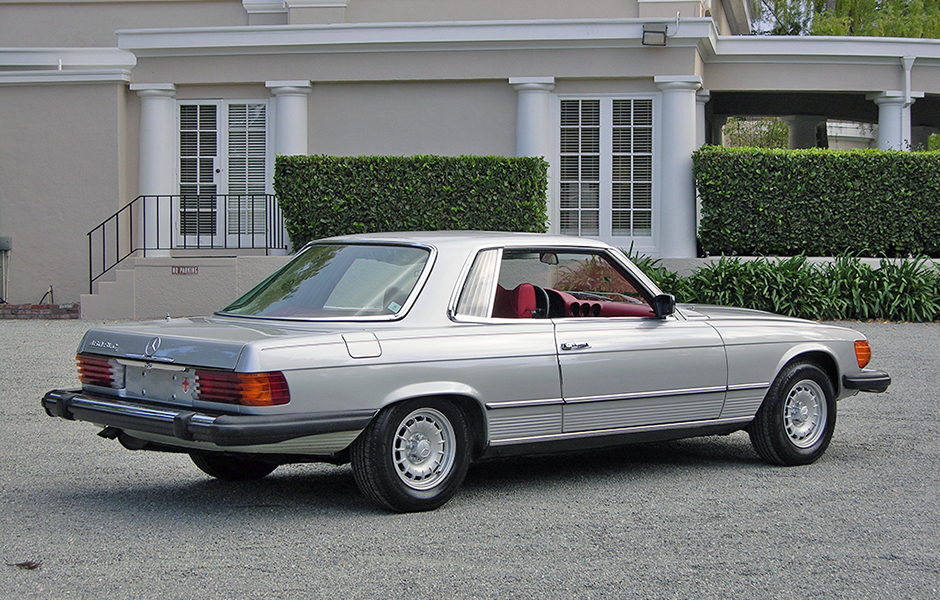 The ‘other’ coupe in the Mercedes late ’70s model range: a little to tall, a little too stretchy in the side view and requiring rear quarter window slats to correct an overlarge side window aperture. The 123 Coupes suffered none of these design compromises.

The conception of the 123 coupe design faced none of the compromises the SLC design team was forced to deal with as they stretched the SL. While its hard to say with certainty, the 123 coupes may only share the hood and front fenders with the sedan. The resulting design is beautifully balanced and remains stylish and appealing to the most discriminate eye today.

The car pictured is a spotless 1978 300CD and is representative of the first series of Diesel coupes constructed by Mercedes-Benz. I’ll have to do some research to determine if it’s the first diesel coupe EVER constructed. Perhaps. It’s one of the few MBs that I feel looks better with US regulation 5 mph bumpers – the Euro cars look somewhat ‘underbumpered’ to my eyes. The sweep of the side window aperture with windows retracted is sublime, a loose trapezoid that defines an airy interior environment, particularly within models fitted with the optional sunroof. 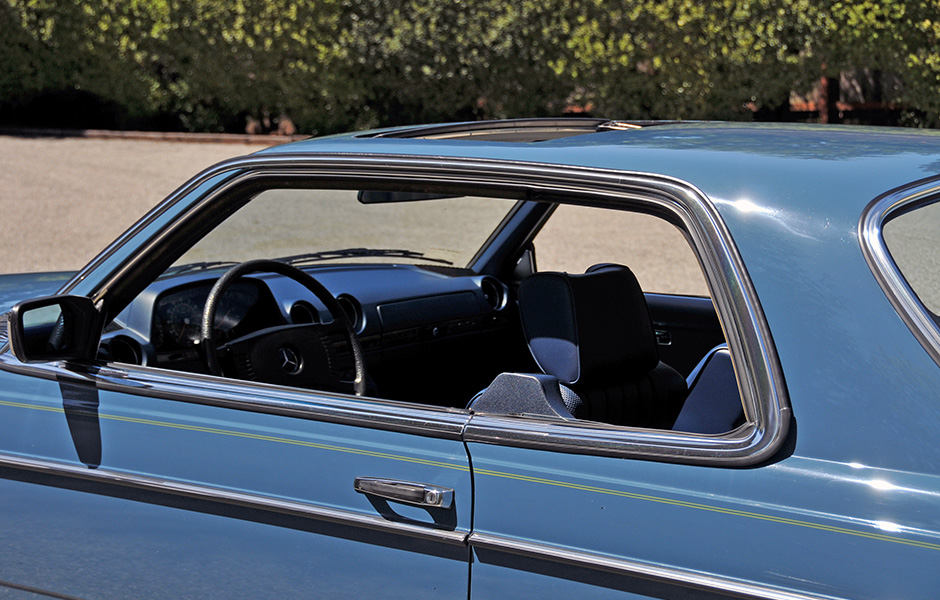 Side window surround is particularly handsome and is enriched by polished aluminum trim sandwiched within rubber surround seals. It’s the focal point of the design. With so many sharp horizontal styling features – upper and lower coachwork creases, bold side impact moldings and lower rocker moldings – the pin stripe is a bit much to my eyes.

Having access to a exceptionally attractive coupe that offered diesel frugality must have been a revelation to the notoriously conservative traditional diesel sedan buyers. With the CD, one could have it all, socially conscious motoring and world class style. Early CDs were not blessed with the new for 1978 turbocharged 5-cylinder diesel but soldiered on with the 77 hp non-turbo version. It wouldn’t be until 1982 that the cars received the 110 hp turbo unit.

Is the design perfect? None are and I’ve always felt the matte black stepped-in rocker treatment creates some sort of void at the base of the design. However, I can’t think of a better solution at the moment. 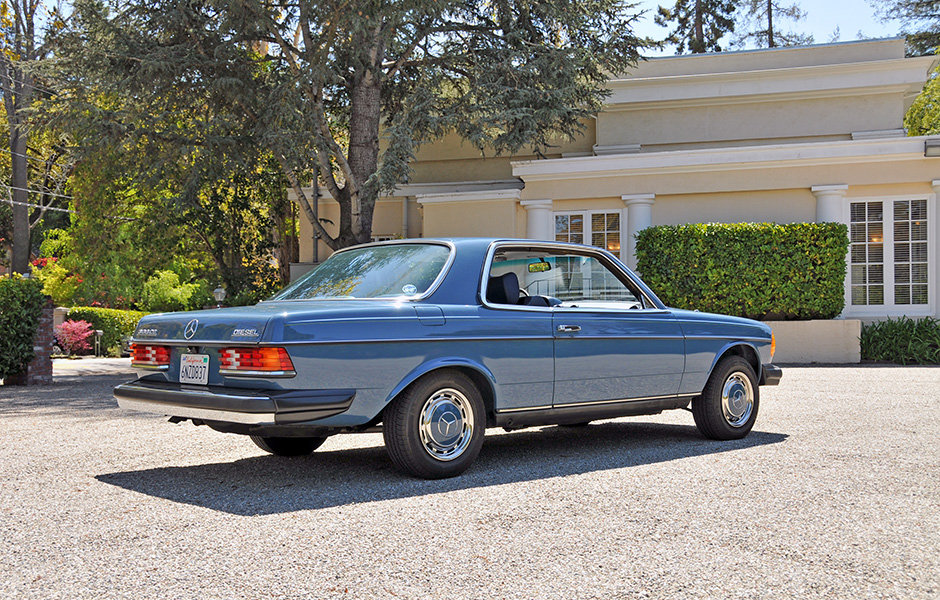 The 123 coupes benefit from a design that is attractive from virtually any angle, something few automobile designs can boast of. Light alloy wheels were an option but the traditional painted full cover seems to be the right look for this car.

Values Rising: for the best examples

We’ve written about 123 series values rising over the last 24 months and exceptional CDs are second only to TD wagons in the current pricing hierarchy. As I’ve mentioned before when framing values for these cars, it’s only the exceptional examples that are rewarded with strong prices. The average, wheezing 123 – whether it be a sedan, coupe or wagon – is still an ignorable automobile. Low mileage, preserved cars – survivors if you will – will attract buyers at figures in excess of $20k.