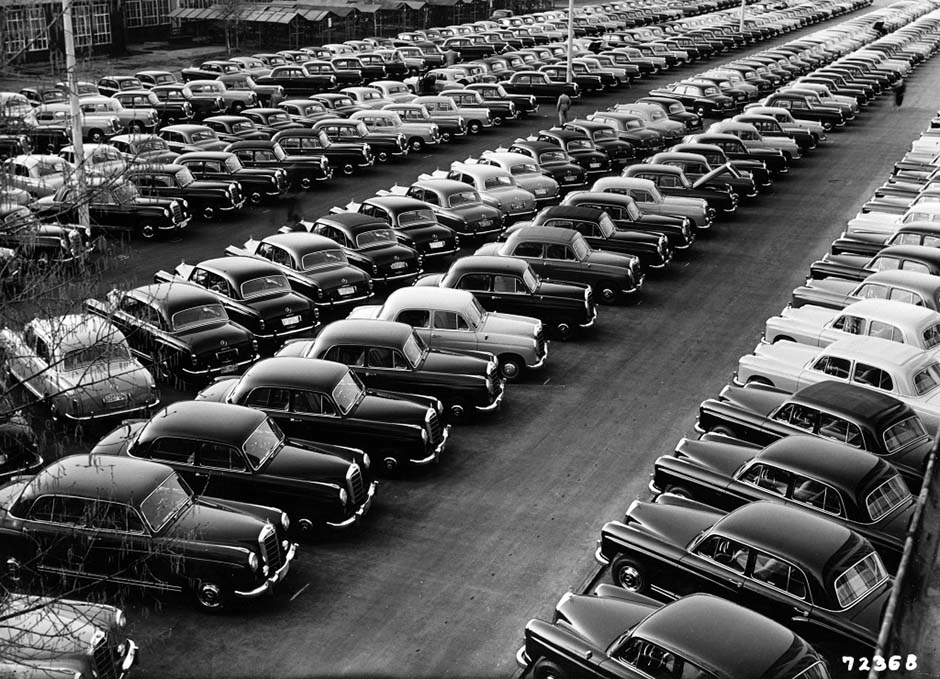 Bestseller: “Ponton” saloons ready for delivery at the Mercedes-Benz plant in Sindelfingen in 1953

The première of the Model 180 (W 120) in 1953, today lovingly referred to as the “Pontoon Mercedes” (or the “ Roundie”), was a technical and aesthetic milestone in the history of the passenger cars from Mercedes-Benz. The intermediate saloon was the first car from the Stuttgart-based brand to feature a unibody and at the same time the first whose bodywork was designed in the form of a pontoon. The W 120 was a trendsetting predecessor of the E-Class, but it also put its mark on the styling and technical design of the new luxury class (model series 180/105/128, from 1954). Already the external appearance of the Model 180 presented by Mercedes-Benz in 1953 excited industry professionals and the general public.

The so-called “three-box design” with a rectangular footprint, fully integrated wings and clearly separate sections for engine, passenger compartment and boot, set benchmarks for modern design. The bodywork of the W 120 stood out sharply from the passenger cars Mercedes-Benz presented right after the Second World War. Their design idiom and technical features were still based to a large extent on the traditions of the 1930s. In contrast, the pontoon design developed in North America in the late 1940s and reinterpreted by Mercedes-Benz for the intermediate saloons appeared fresh and clean. This design lowered the aerodynamic drag of the Mercedes-Benz 180 compared with earlier models, reduced wind noise and offered a more spacious passenger compartment. 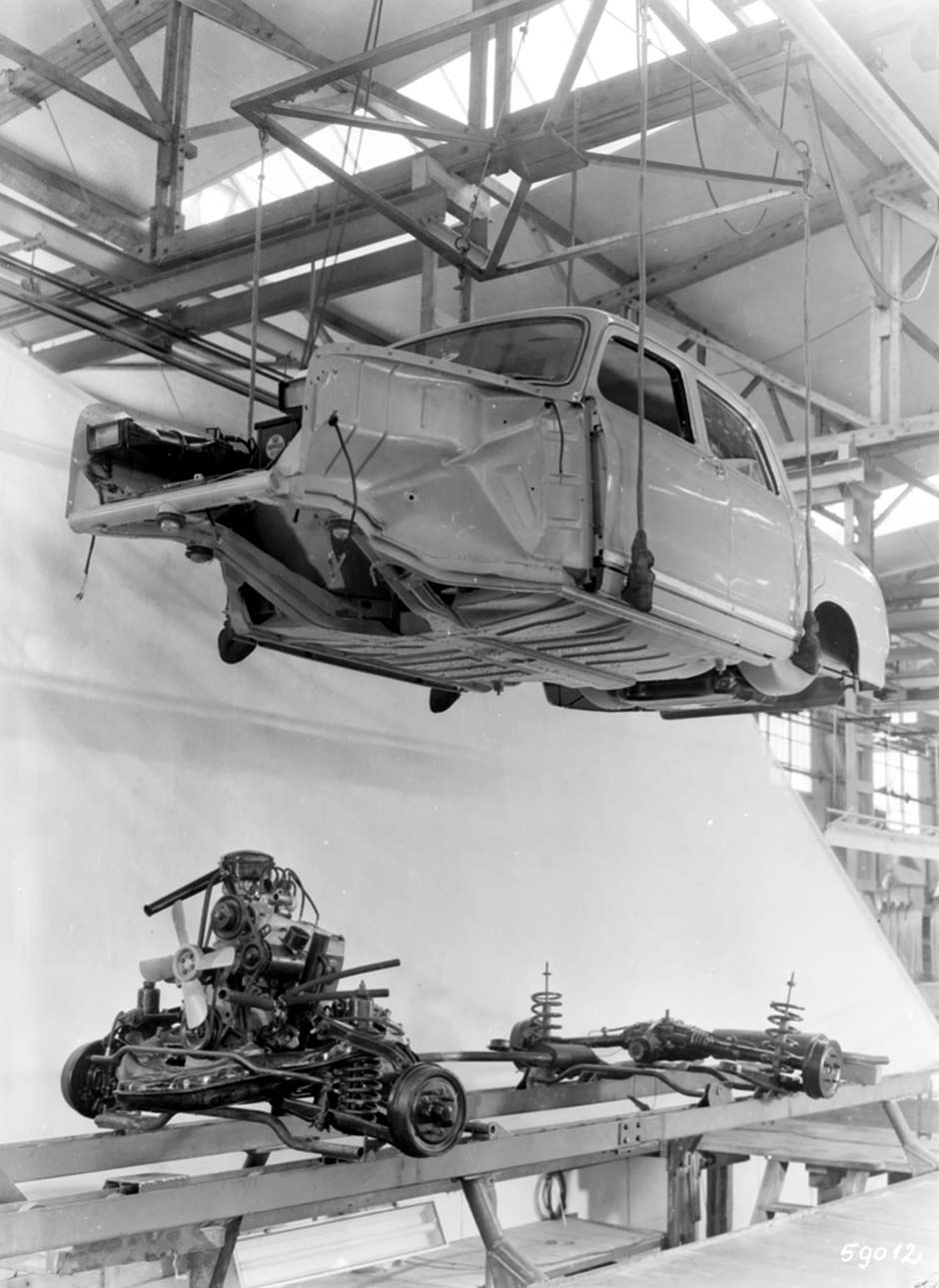 “Ponton” marriage: Chassis and body of a Mercedes-Benz saloon from the W 120 series are united in this photo, taken in 1953.

The unibody pioneer at Mercedes-Benz

The bodywork of the Model 180 also set new technical standards. For the first time a Mercedes-Benz passenger car featured a unibody which was firmly welded to the frame-floor system to create a static structural unit. Compared with conventional frame construction with mounted body, this design increased torsional rigidity while simultaneously lowering the weight. Another innovation was the double wishbone suspension of the front wheels which was bolted to a front axle carrier instead of directly to the frame.

The U-shaped axle carrier also accommodated the engine, transmission and steering. It was mounted to the front section of the frame with silent blocks for low noise levels. The rear wheels on the tried and proven swing axle were now additionally controlled by widely spaced trailing arms. All in all this resulted in handling qualities that were outstanding for the time. In his road test report published in “ auto motor und sport” magazine in 1953, Werner Oswald commended that the driver in the Model 180 “can unhesitatingly push the envelope set by the engine and suspension right from the start”.

The aforementioned engine was a side-valved four-cylinder in-line engine with a displacement of 1767 cc that produced 52 hp (38 kW). The Model 180 reached a top speed of 126 km/h and took 31 seconds to accelerate from rest to 100 km/h. 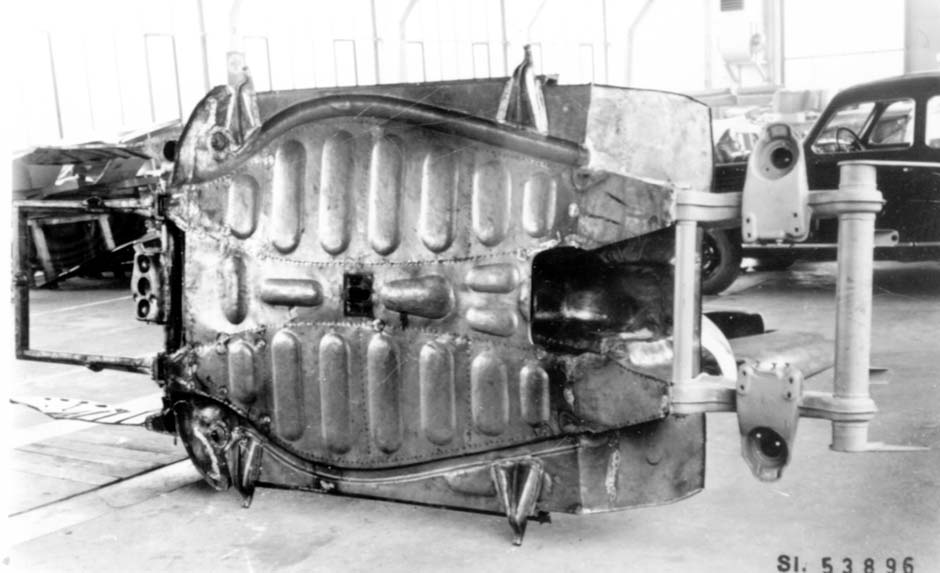 The Mercedes-Benz 180 presented 60 years ago quickly evolved into an entire model family. The arguably most famous variant of the “Pontoon Mercedes” was the Mercedes-Benz 190 SL sports car, which was presented in New York in 1954 and went into production in 1955 This roadster of the 121 model series was based on the shortened frame-floor system of the Model 180 and was powered by a four-cylinder engine producing 105 hp (77 kW) from a displacement of 1897 cc. 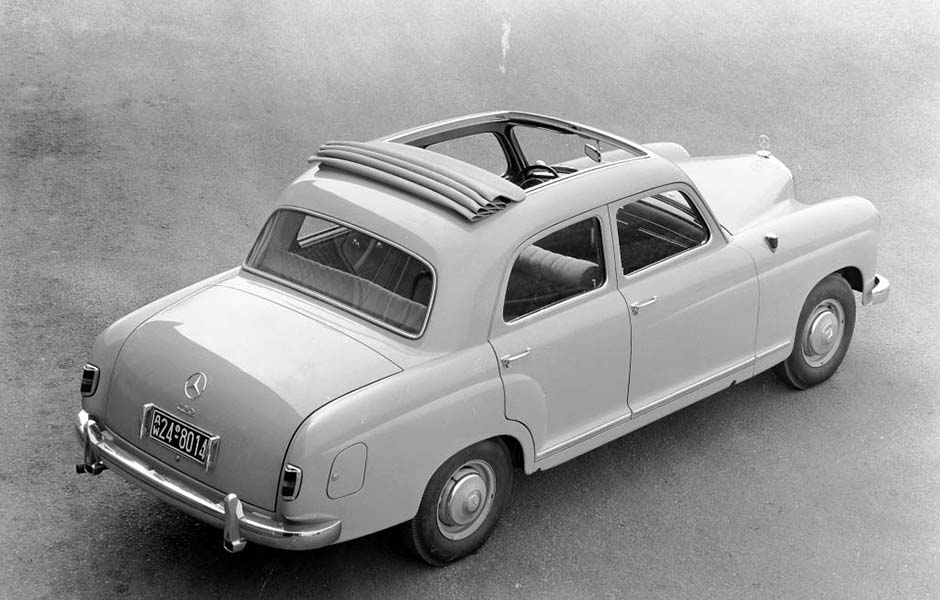 Benchmarks for the luxury class

The Mercedes-Benz 180 put its stamp on the automotive world even before its market launch because the W 120 was the first car ever to appear in a spy photo. “auto motor und sport” magazine published a first photo of the future Model 180 in 1952, and accompanied it with a parody of Goethe’s Erlkönig (Alder King) poem, in which the new intermediate saloon is portrayed as “ Daimler’s youngest child”. This is how the German term ‘Erlkönig’ (development mule) was coined to describe a prototype or a pre-production vehicle prior to its official 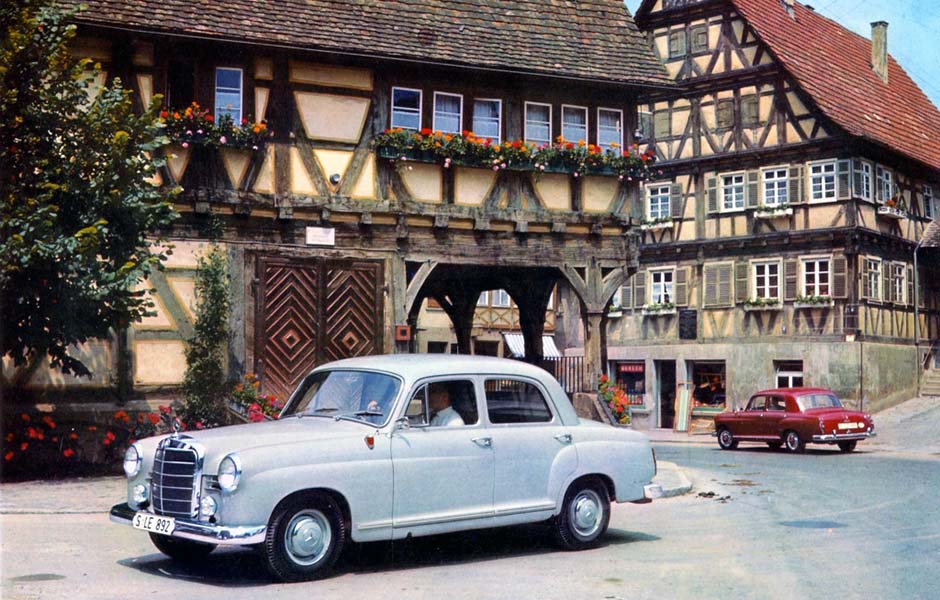 Star of the Heimatfilm (sentimental films in idealised regional settings popular in the 50s): “Ponton Mercedes” saloon (Mercedes-Benz 120/121 series, 1953 to 1962) against a half-timbered house backdrop.