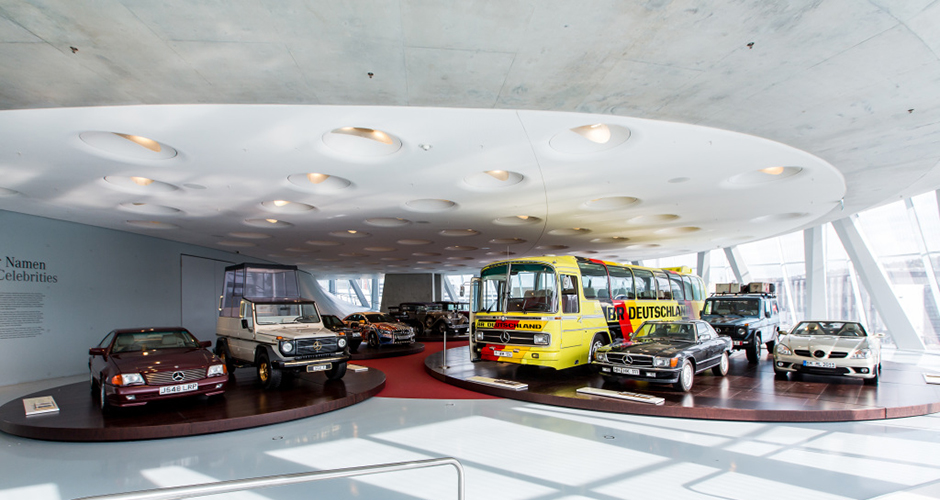 The Collections Room “Gallery of Names” at the Mercedes-Benz Museum. Five new vehicles. The ex-Princess Diana 500SL and the G-wagon ‘Popemobile’ on the left share space the clever “Names” gallery.

Collections Room “Gallery of Names” at the Mercedes-Benz Museum

The Mercedes-Benz Museum is now setting a new tone with the Collection 4 Room “Gallery of Names“: since 11 April 2017, the new room has enriched the permanent exhibition with the SLK 55 AMG of Lukas Podolski, the CLA SteetStyle designed by Cro the 190 E 2.3 of Nicolas Cage, the 190 SL of astronaut David Randolph Scott and the 300 GD of globetrotter Günther Holtorf.

Stuttgart. The “Gallery of Names” presents vehicles of famous individuals, such as Pope John Paul II., Lady Diana, Emperor Wilhelm II and Konrad Adenauer. The largest exhibit is the O 302 team bus of the German national football team from 1974, while the smallest object is the Daimler motorised road car of the Sultan of Morocco from 1892.

Mercedes-Benz CLA StreetStyle designed by Cro
In 2015, the musician Cro, famous as a rapper with the panda mask, transformed a Mercedes-Benz CLA into a work of art. By the free-hand use of spray cans, touch-up pencils and paint, he created a unique design in Street Art style, which is now on show at the Mercedes-Benz Museum. 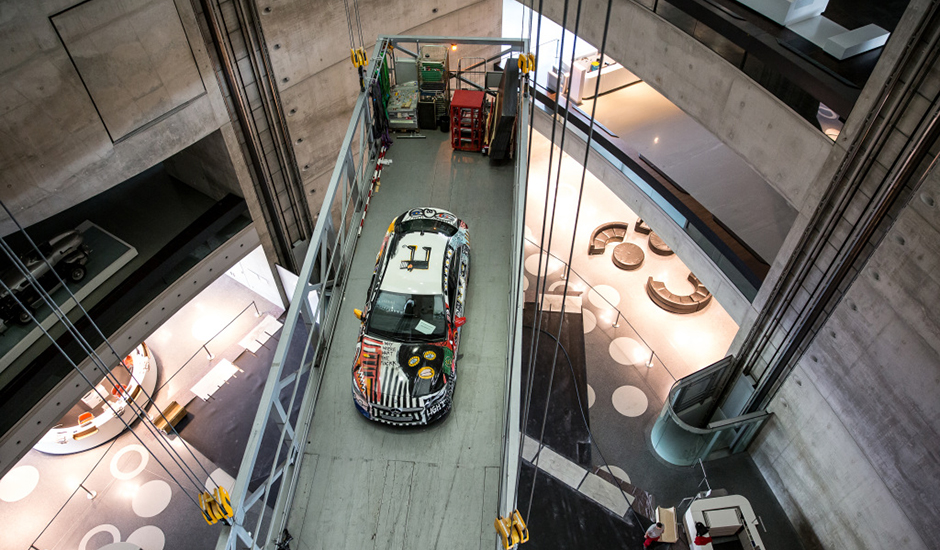 CLA StreetStyle designed by Cro is lifted up into Collections Room 4. 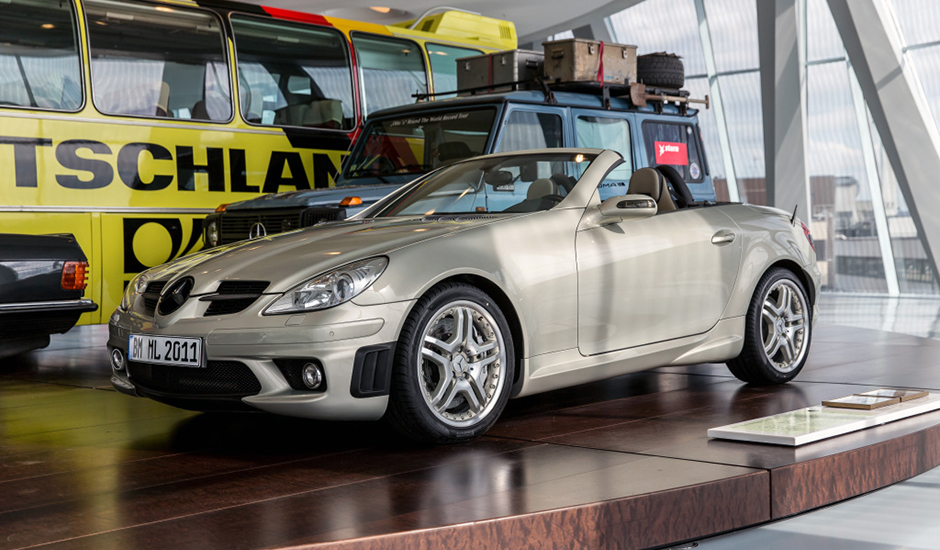 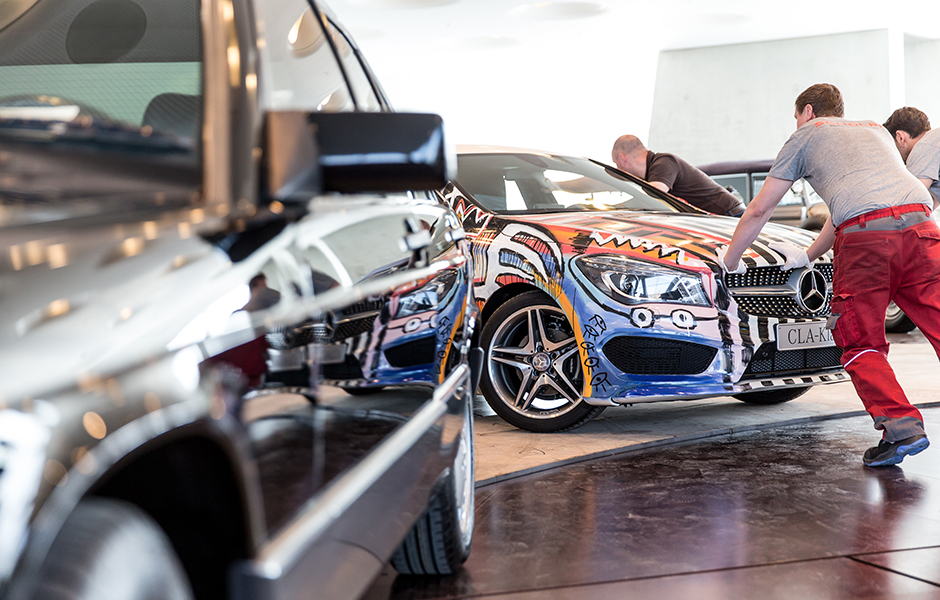 Collections Room “Gallery of Names” at the Mercedes-Benz Museum. The CLA SteetStyle needs to get the right position.

Mercedes-Benz 190 SL of David Randolph Scott
The Mercedes-Benz 190 SL of NASA astronaut David Randolph Scott, who in 1971 became the seventh human being to set foot on the moon, is in its unrestored original condition. He bought the elegant roadster on 2 March 1959 from new and owned it until August 2004. The 190 SL was unveiled in 1954 along with the 300 SL “Gullwing”. The two cars established the tradition of “SL standard production sports cars”. 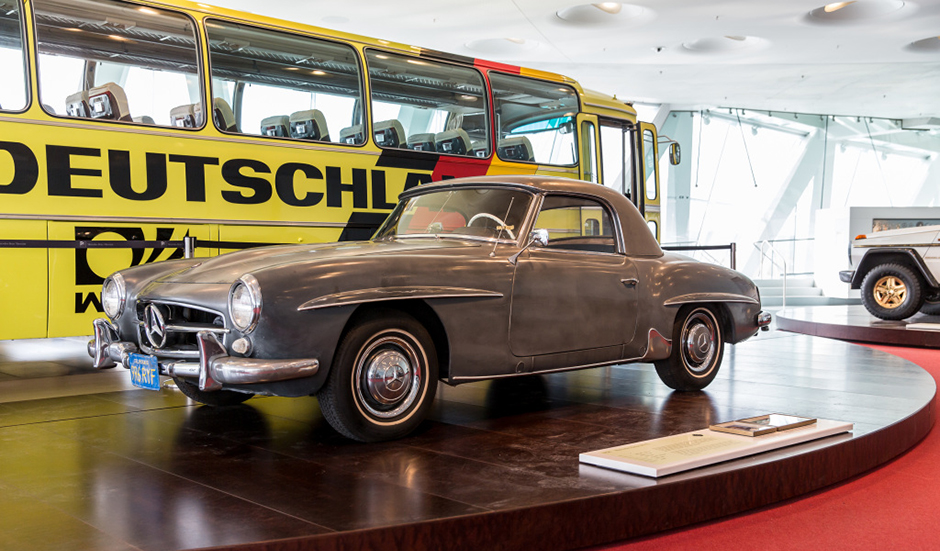 Mercedes-Benz 300 GD of Gunther Holtorf
A total of 897,000 kilometres in 215 countries: that is the impressive record set by the Mercedes-Benz 300 GD of globetrotter Gunther Holtorf, who used “Otto”, the affectionate nickname given to the off-roader, for 26 years as an expedition vehicle. In doing so, he realised one of the brand’s advertising promises: “Where there’s a G, there’s a way.”