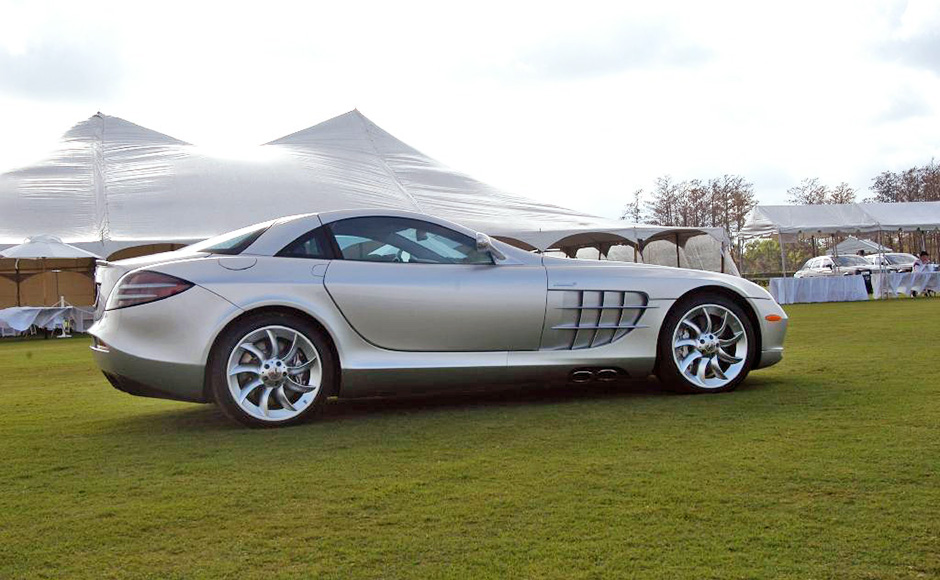 First glimpses of the brawny SLR happened at various US concours in 2004. The new SLR was a breathtaking sight in the flesh. McLaren designer and SLR collaborator Gordon Murry loathed the car’s bulk.

I distinctly remember the excitement I felt sitting among the bidders at the Christie’s Monterey auction in August 2004. My friends at Smythe Mercedes-Benz had decided to place their first allocated, but not yet constructed, 2005 SLR in the auction to take advantage of the rising wave of specialist media hype.

Buoyed by news of Beverly Hills Mercedes’ $1m SLR auction-style sale with none other than Jay Leno as the auctioneer, the Smythe brass had seven figures in mind as well. Against the backdrop of the life-size press image that would eventually grace every 14 year old car nut’s bedroom wall, the plea for bids was greeted with a deafening silence. With all the previous lots having received vigorous bidding, this silence was stunning.

After what seemed an eternity in the auction world, a bidding paddle rose from the crowd; $475k and just above the car’s MSRP. And there the bid stood for another eternity when, as the gavel began its decent to hammer the car sold, another paddle appeared, raising the ante to $520k. And that was it, not a paltry sum but well below expectations.

I suppose “well below expectations” would encapsulate the brawny SLR’s legacy in the minds of anyone who was charged with selling them, from corporate sales managers to dealer personnel. While early 2005 model year sales showed some stability and a few SLRs sold substantially over their original MSRP of about $450k, demand for this 617 hp, swing-wing Silver Arrow soon waned. The glorious SLR era ends this month with the last example of its latest iteration, the over-the-top Stirling Moss Edition speedster, due for completion before year’s end. 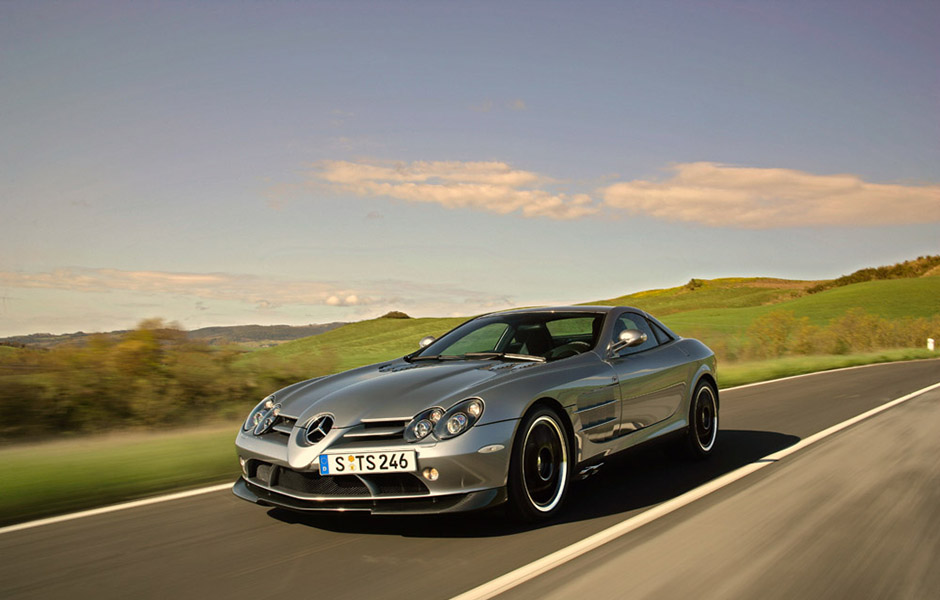 722 Edition offered 650hp and improved grip as well as subtle but effective cosmetic improvements. This SLR will likely begin to appreciate first.

Was the SLR a failure? Absolutely not. While the initial edict to McLaren was muddled, demanding towering supercar performance integrated within a daily usable, automatic transmission equipped, luggage toting platform, the SLR range must be respected as the pinnacle of the front-engine ultra high performance genre. While some elements of the car’s styling were contrived, if you park one on the street next to a same color Ferrari 575 Maranello – a period sales competitor – and observe which car passersby dwell on, the success of the dramatic SLR design will be evident.

There were some bright spots along the way: The revised 650hp “722” edition was met with immediate demand and will quite likely be the edition to retain the highest percentage of its initial value and the first SLR to appreciate. However, if we were to point a finger at the core reason for the general weakness in demand for the SLR, it would have to be a far too optimistic production schedule, given the car’s fundamental layout. 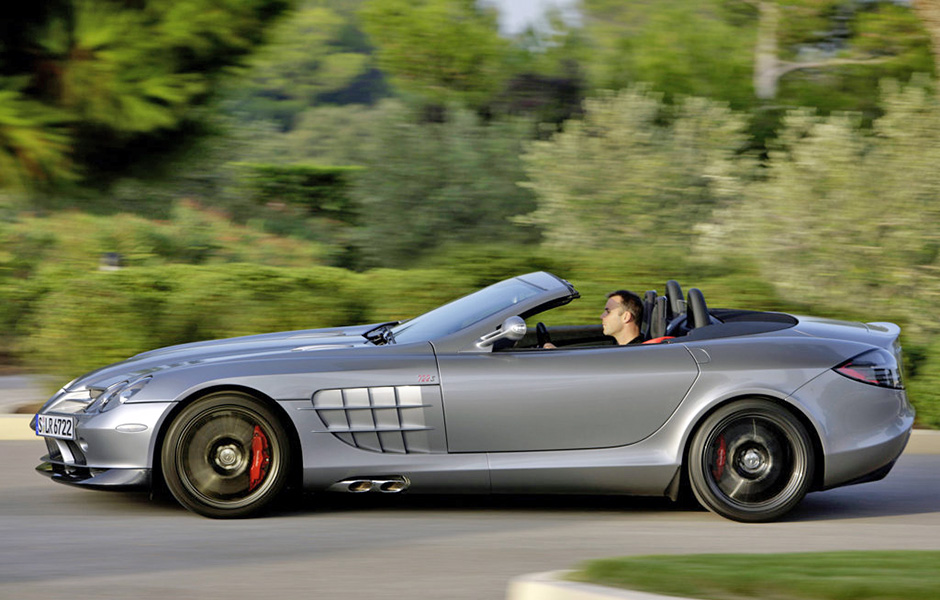 722S upgraded standard Roadster power and handling dynamics. This will also have some appreciation strength in coming years.

The planned production schedule of 3,500 units over 7 years was just not logical. Had only 400 or so units been constructed – about the number of Ferrari Enzos constructed (399) from 2002 through 2004 – we would have seen stronger support and perhaps experience used SLRs trading today at or above their original selling prices. The other side of this discussion is that a used SLR is perhaps one of the best values on the used supercar market today. 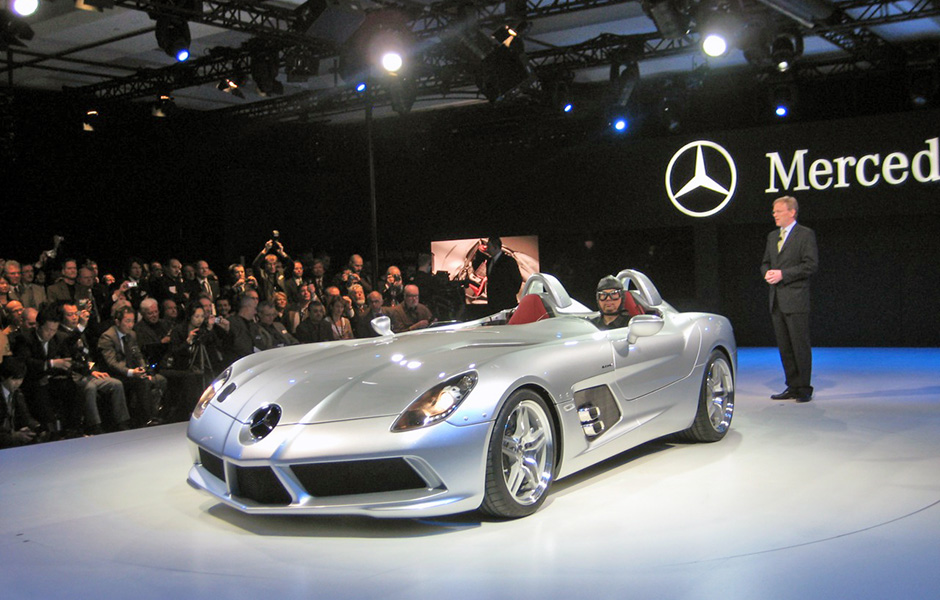 Highly revised and bringing the SLR series full circle to a no compromise finale, the Stirling Moss Edition will be most at home on the track. This car’s purity echos that of the 1955 Mille Miglia winning 300SLR with now “Sir” Stirling Moss at the wheel. Simply outrageous…

I would not count the SLR out as a future appreciating milestone automobile. We must remember that original Gullwing values fell to roughly 40% of their original selling price within six years of ceasing production, to about $3,500 in 1963. The last 47 years have been kind to the Gullwing: I sold a superb 1955 example last week for $525k. The SLR will yet have its day, perhaps when all those teenagers who admired the car on their bedroom wall attain a level of success that allows them to acquire their dream car.