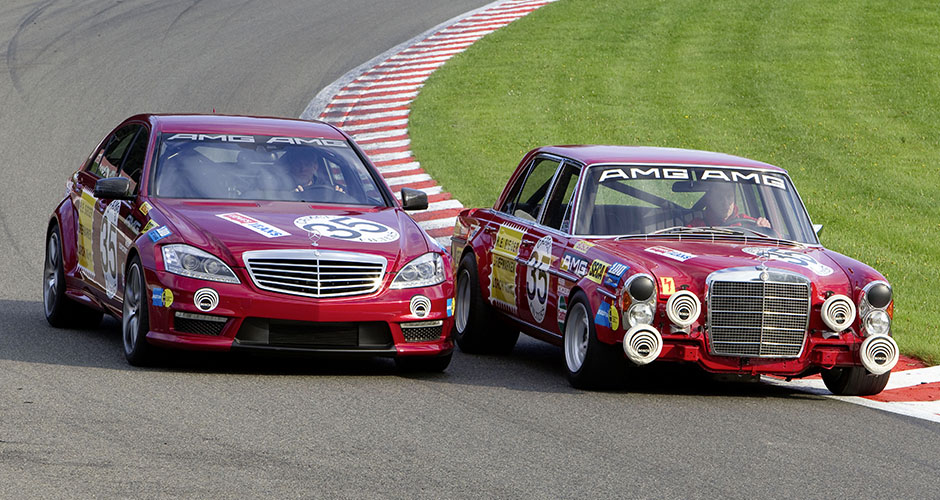 Power with Efficiency
The Turbo era begins at AMG

Mercedes recently returned with two unique cars to the site of one of AMG’s greatest achievements during its early years, the sinuous high-speed Spa circuit in Belgium. Each finished in an eye popping red; the two S-Class sedans symbolize the Silver Star’s quantum leap in power and efficiency over the last four decades. The more upright model was a familiar warrior from years past – AMG’s muscular 300SEL 6.8.

The real story here is the September 2010 release of the new AMG Performance 2015 low emissions, fuel efficient 5.5 liter bi-turbo V8 engine/7 speed MCT transmission combination. There will be no 2010 race prepared S63s competing at Spa the year although a computer simulated race comparison with the 300SEL would be an interesting exercise. 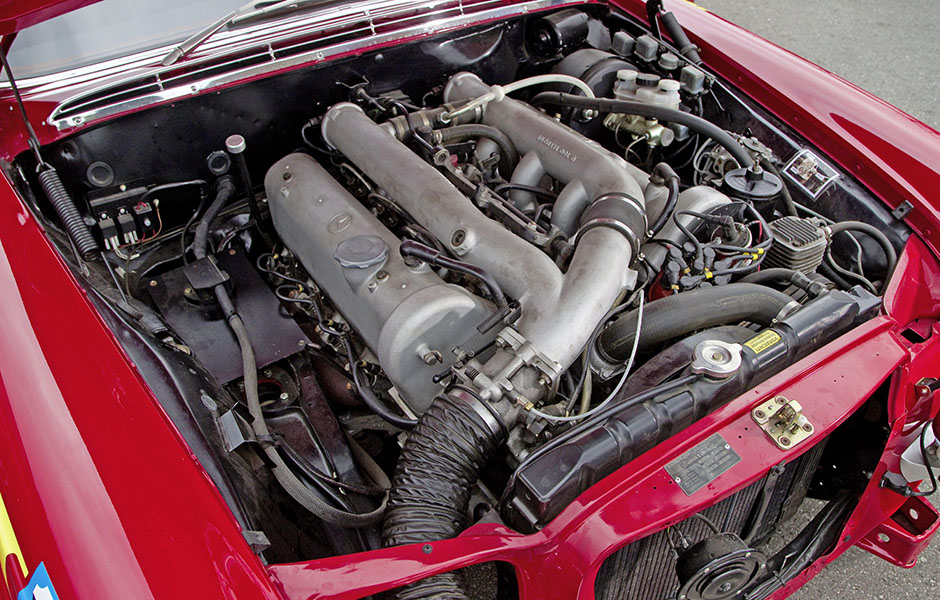 In 1971, it required 6.8 liters of cast iron V8 for AMG to generate about 430 HP in their heavily modified 300SEL competition saloon. 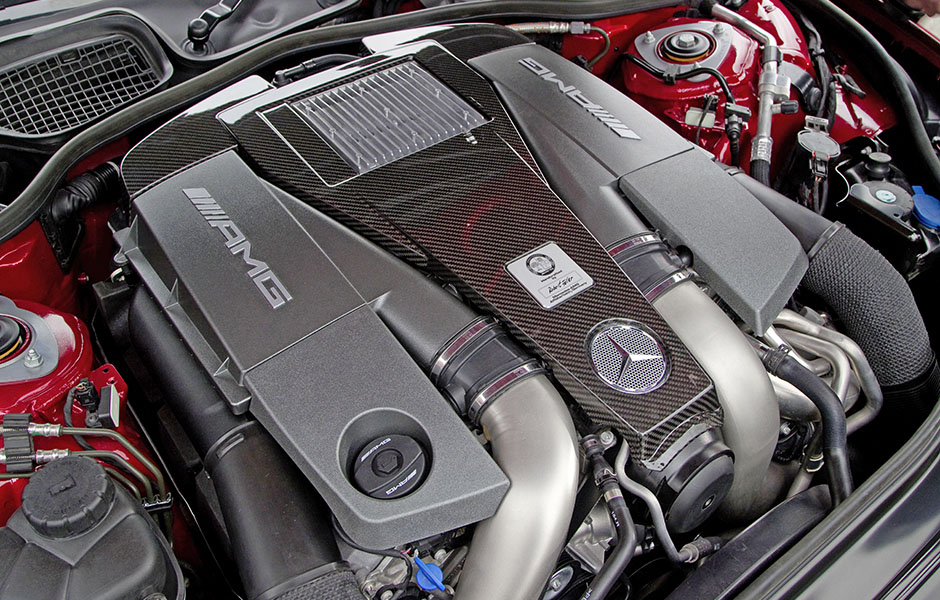 The new for 2010 5.5 liter alloy V8 fitted with twin turbos produces 19 more HP (537 HP) than the current normally aspirated 6.3 liter but with a massive reduction in emissions and consumption.

With their “Performance 2015” program, AMG is taking the initiative toward addressing the “greening” of the high performance segment head on. The new twin-turbo S63 sedan delivers significant improvements on all fronts – power, fuel consumption AND emissions.

“With a provisional NEDC fuel consumption of 10.5 liters per 100 kilometers, the new S 63 AMG is 3.9 liters more economical than the preceding model powered by the naturally aspirated AMG 6.3-litre V8, despite an increase in output by 14 kW (19 hp) resp. 34 kW (46 hp) and in torque by 170 and 270 newton meters. Engine specialists consider this achieved fuel saving of more than 25 percent to be nothing less than a quantum leap. CO2 emissions have likewise been significantly reduced: at 246 grams per kilometer, the figure is 28.5 percent lower than for the previous model. Both performance variants have identical fuel consumption and CO2 figures.”

Running the competition 300SEL through the industry’s fuel consumption loop and testing tail pipe emissions would provide some laughs compared to the new car’s testing results. And so they should. Automobile engine management and design has been transformed over the last four decades and is poised once again for another sea change. AMG and Mercedes-Benz are leading the way with their AMG Performance 2015 program. 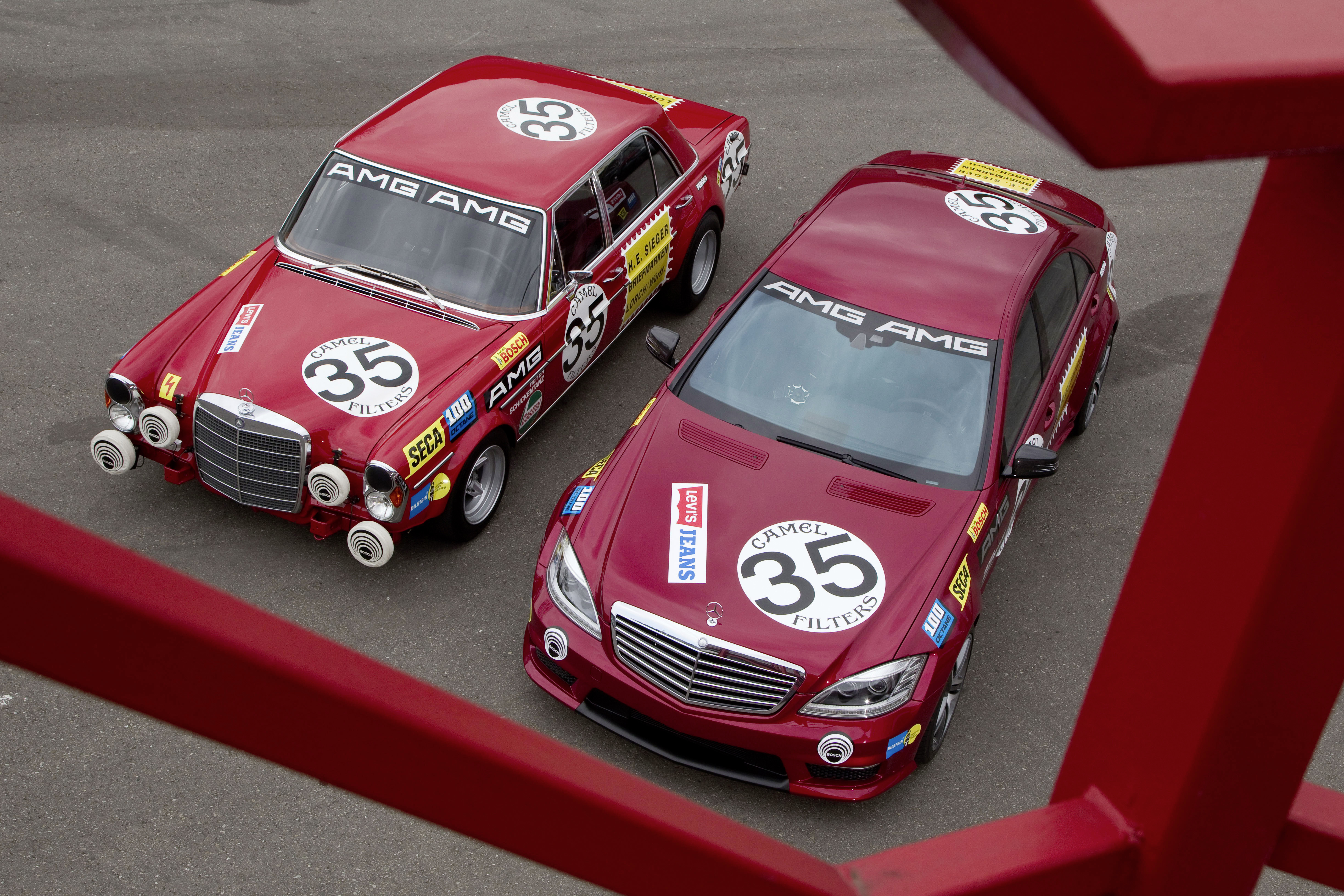 Seeing Red. Similar in color only, the two AMG brothers reveal the leap in engine technology required to meet today’s demand for power and efficiency.