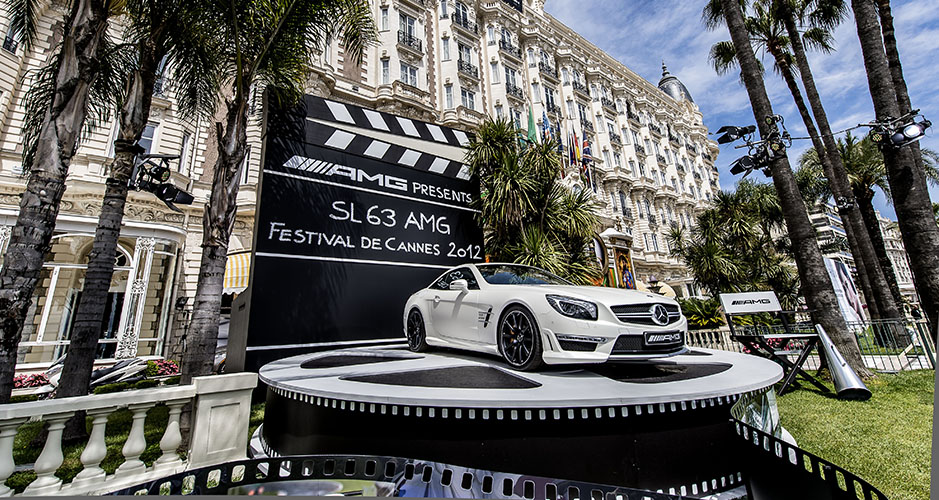 Blending art and mechanical design: The new SL63 debuts in Cannes. Look carefully at the presentation here to see the car is sitting on a massive roll of film and the sign is an “Action!” clapboard. Very clever.

We covered the exceptional technology of the newest generation (R231) of the SL in December’s ‘2013 SL Revealed’ article so our coverage of the just released SL63 can focus on the engine and suspension upgrades. The new, substantially aluminum, SL bristles with innovative technology and the new ’63’ powerplant reflects AMG’s relentless search for power, increased fuel mileage and lower tail pipe emissions.

Ola Källenius, CEO at Mercedes-AMG GmbH summed up the philosophy behind the 2013 SL63 succinctly: “The new SL 63 AMG is yet another masterpiece from Mercedes-AMG. Be it driving dynamics, lightweight construction or efficiency – the SL 63 AMG represents a giant leap forward.” AMG is leaping on all fronts and the SL63 will reward the performance minded roadster buyer with improved braking capability, massive power and improved high speed handling dynamics.

The ’63’ type designation has now become somewhat muddled: ’63’ (SL63/S63/CL63) series cars that you see on the road can now be fitted with either the original AMG designed and constructed normally aspirated 6.2 liter V8 or the new 5.46 liter twin-turbo variant. Used AMG buyers beware. A result of AMG’s Performance 2015 program, the new M157 V8 achieves more power over the original base 6.3 engine with 27% less carbon emissions and 25% better fuel mileage. 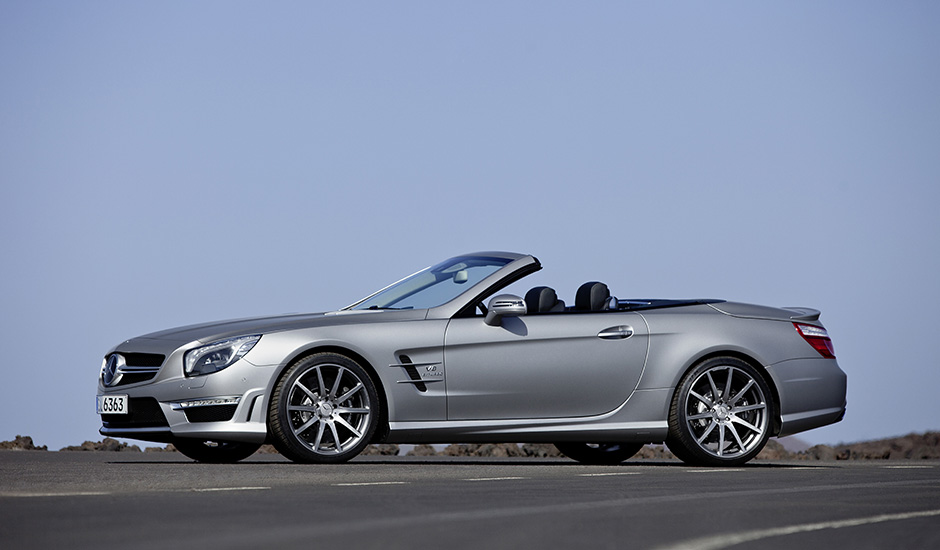 We’re still getting used to the new R231 SL’s bulk. While the design is not particularly organic and certainly not lean, the SL63 communicates automotive gravitas and power. 20″ rear wheels are optional but an extensive array of advanced technology is standard.

The performance and efficiency crucible of the Formula 1 series spawned the cylinder management technology. Race engineers theorized fuel savings could by gained by precisely shutting down 4 of 8 cylinders during low speed caution laps run under a yellow flag situation. Fuel saved during these periods could allow more potential full throttle minutes late in a race when other competitors may forced to conserve fuel.

While the new normally aspirated 5.5 engine – currently exclusive to the SLK55 – uses the four cylinder shut-off process extensively, the current twin-turbo 63 engines use a derivative of this technology to smooth full throttle upshifts. The system briefly interrupts ignition and fuel injection to selected cylinders under full throttle blasts, allowing quicker gearshifts and providing a pleasant roar out the tail pipes. 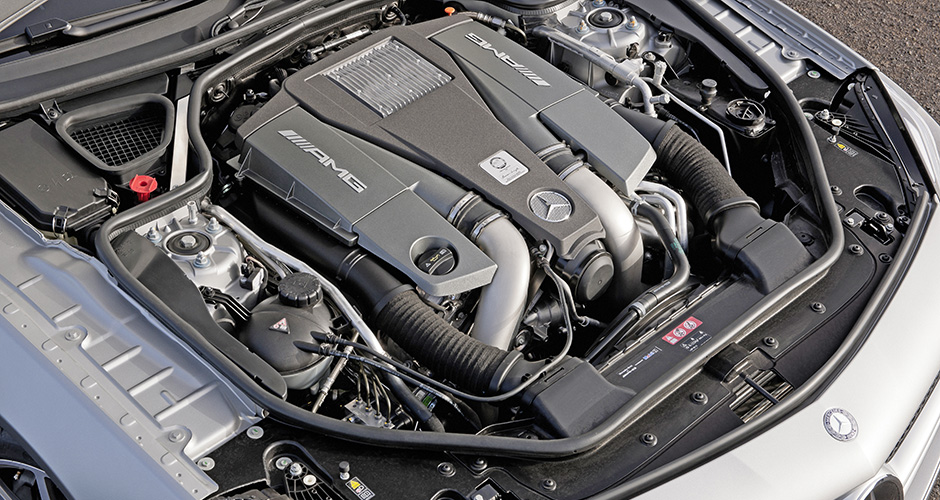 Yet another new powerplant from AMG: The 5.4 liter twin-turbo V8 beats the original 6.3 liter normally aspirated V8 on all fronts. 564hp is available with the optional ‘AMG Performance’ package.

AMG’s ‘ECO start/stop function and a derivative of KERS, also pioneered in F1, achieve the conflicting goals of massive power, reduced emissions and increased fuel mileage. Similar to F1’s rationale of seamlessly shutting down cylinders during race caution periods, the SL63’s start/stop function shuts the engine off entirely if the system senses constant brake application and no throttle input for a few seconds – the dynamics of sitting at a stop sign/light. It’s all very clever and just about seamless. Prius owners will recognize this start/stop sensation.

It should be mentioned that the start/stop function, combined with programmed second gear starts are only available when selecting the “C” (Controlled Efficiency) drive mode. All high fuel mileage bets are off once the selector is rotated to “S” (Sport), “S+ ( Sport plus) or “M” (Manual). 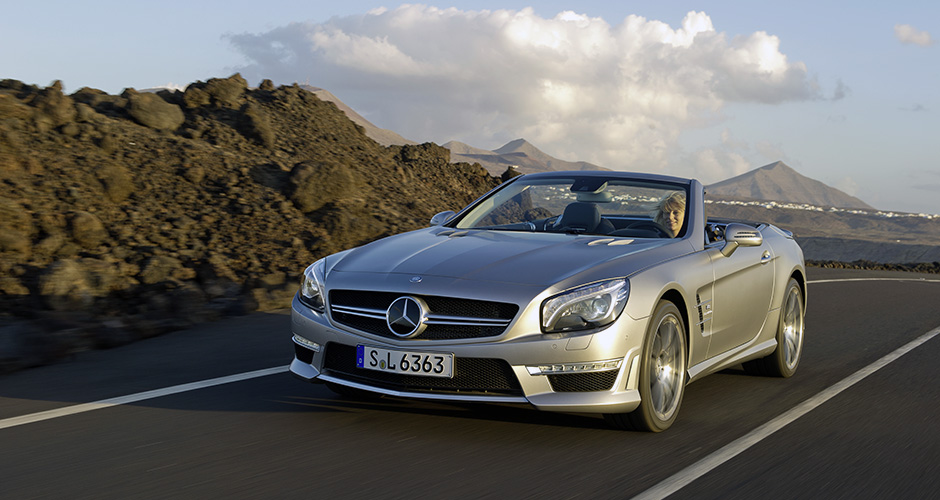 10 years on from the introduction of the epic SL55, Mercedes-Benz and AMG present us with the future of high performance luxury roadster touring – the SL63.

While the SL63 shares the same aluminum steering knuckles, aluminum front suspension spring links and aluminum rear suspension links with the base car, AMG has dialed in more negative camber at each corner of the SL63 and revised the Active Body Control for higher speed agility. The steering ratio has been modified as well and the car incorporates revised active body control (ABC) and electronic stability programs (ESP). The press release also mentions AMG’s newly developed ‘compound’ brake system featuring ‘compound discs’. What ‘compound’ means is unclear but quite likely refers to a mixture of materials to lighten the discs without sacrificing heat dissipation.

The new SL63 is a massively powerful personal luxury roadster whose extraordinary technology offers towering speed capabilities while electronically protecting drivers from potential high speed mistakes. This in addition to a fabulous sound system, gorgeous interior trim, 60 years of heritage and an exhaust rumble sure to satisfy any enthusiast. And the whole package is served up in an environmentally friendly manner. Brilliant. For more information on this and any other current Mercedes-Benz or AMG product, contact Tony Spencer @408-345-2255.