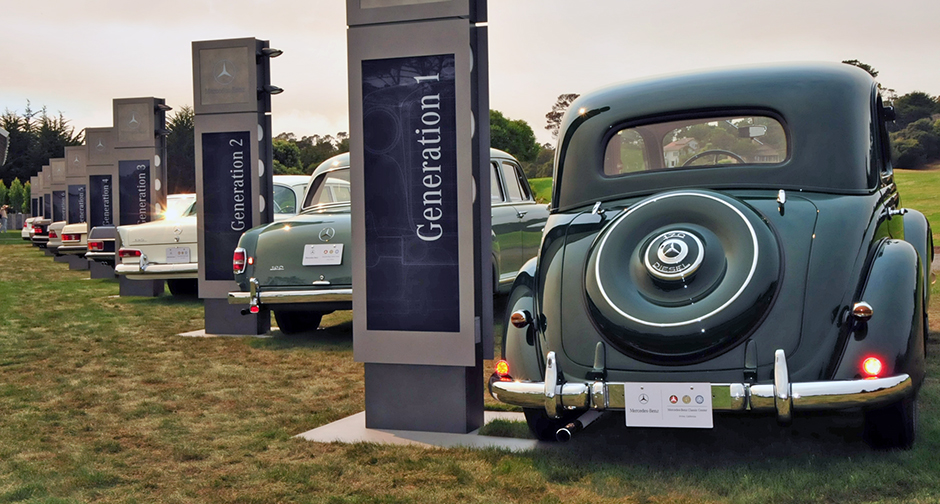 Mercedes-Benz is in the unique position among automobile manufacturers of being able to draw inspiration from and create brand awareness around both its 120 years of vehicle production and extensive racing exploits dating to the first quarter of the 20th century. The task of insuring its current and future North American passenger car owners remain cognizant of the mechanical dna linking the most mundane new C300 to the legendary Mercedes-Benz products of years past, racing or otherwise, falls to the Classic Center in Irvine, California.

It’s hard to stand out during the Monterey Classic Car week in August, but Center director Mike Kunz orchestrated a dynamic display that was a weekend destination in itself. One of the longest standing sponsors of the Pebble Beach Concours, Mercedes-Benz remains absolutely confident in the future of their products and their expansive presence reflected this philosophy. Despite today’s challenging automobile sales climate, this gorgeous display was their largest at Pebble Beach to date.

We were all treated to a rare glimpse of some of the jewels usually residing at the Mercedes-Benz Museum. 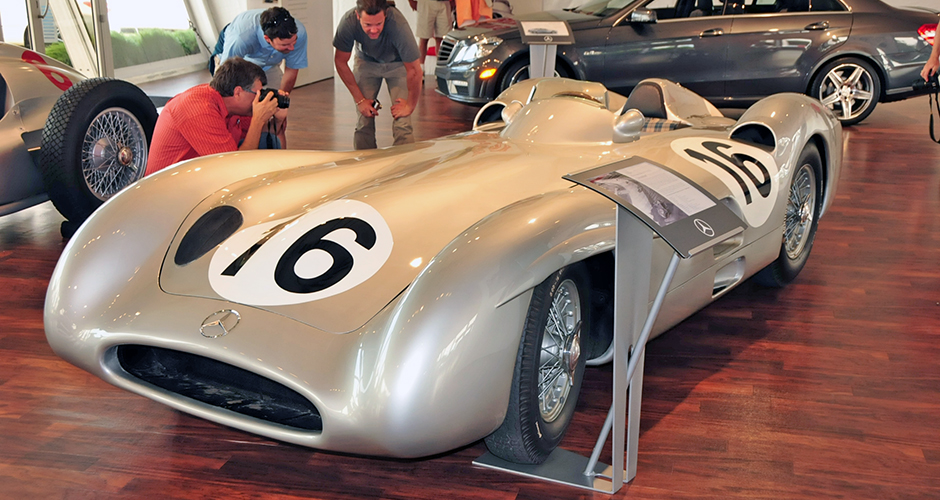 On loan from the Indianapolis Motor Speedway Hall of Fame Museum, this W196 streamliner was used for high speed GP tracks in 1954.

Against the glorious backdrop of Pebble Beach fairways stood an elegant showroom in front of which were displayed a variety of the Center’s inventory for sale and a clever lineup of mid-size sedans beginning with a spotless 170D and culminating with the new “E” class, albeit the sexy new coupe. Fintails, pontons, 115 chassis, 123 chassis sedans; each generation was represented. Any visitor curious about the driving experience of two of the most significant recent models from Stuttgart, were treated with quick drives in an SLR roadster and a Maybach sedan.

However, the real gems were quietly sitting inside the elegant glass showroom. Perhaps for the first time in North America, Mercedes-Benz assembled a mouth watering display of its Silver Arrows: a W25, two W154s, a W196 streamliner and an early 194 series racing Gullwing. This was an extraordinary group of cars that represented the Mercedes-Benz competition department’s domination of motorsport from 1934-1940 and its phoenix-like rise from the rubble of WW2 to motorsport dominance again from 1953-1955. 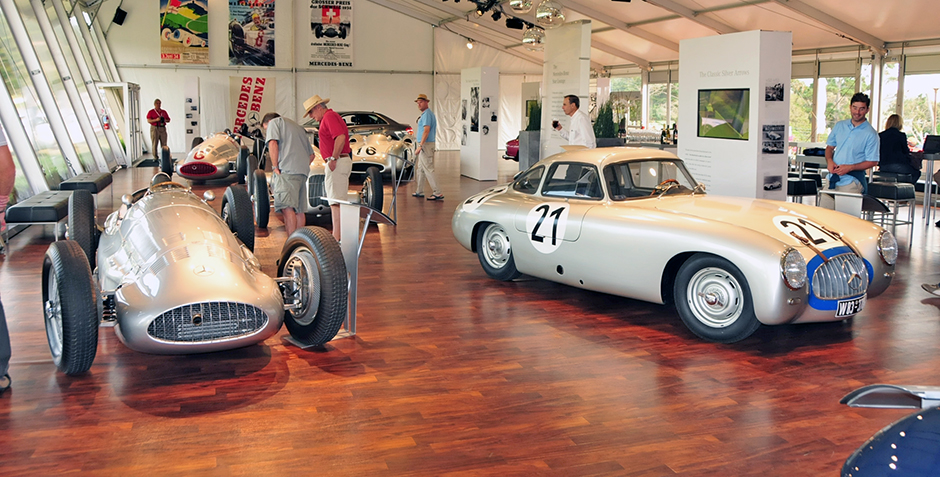 Surely there had to be a reason for this display and indeed there was: 2009 marks 75 years since the W25 Grand Prix car triumphed at the 1934 German Grand Prix to began the era of the “Silver Arrows.” We were all treated to a rare glimpse of some of the jewels usually residing at the Mercedes-Benz Museum.

Sharing the showroom with the race cars was the newest iteration of the Maybach (the $1.3m Zeppelin ), a freshly restored Strawberry Red 300SL roadster, an E63 and – connecting the new Zeppelin to its inspiration from the classic era – a lovely 1932 Maybach DS8 Zeppelin. Parts manager Tom Hanson and restoration manager Jeff Cote were on hand to assist with any parts/restoration questions. 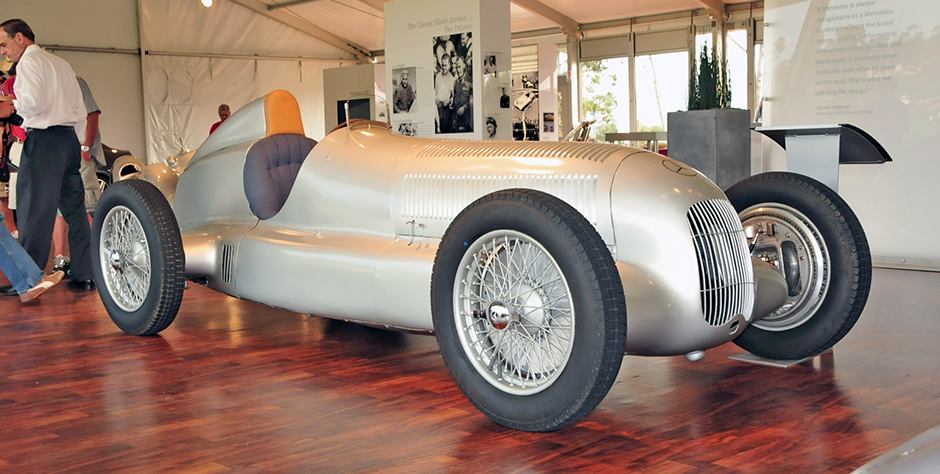 W25 carried 314hp straight eight and weighed 750 kg (1,653 lbs). A celebration of the W25’s initial victory at the Eifelrennen 75 years ago prompted this fabulous display.

Chatting with Mike Kunz late Saturday afternoon revealed a successful although very tiring few days; the Strawberry roadster was in negotiation “north of $700k” and the deep red 220SE Ponton convertible sold. Yes, the Classic Center not only supplies parts, service and restoration services, but is also in the business of selling spectacular and unique Mercedes classics. The Classic Center’s inventory is located here. 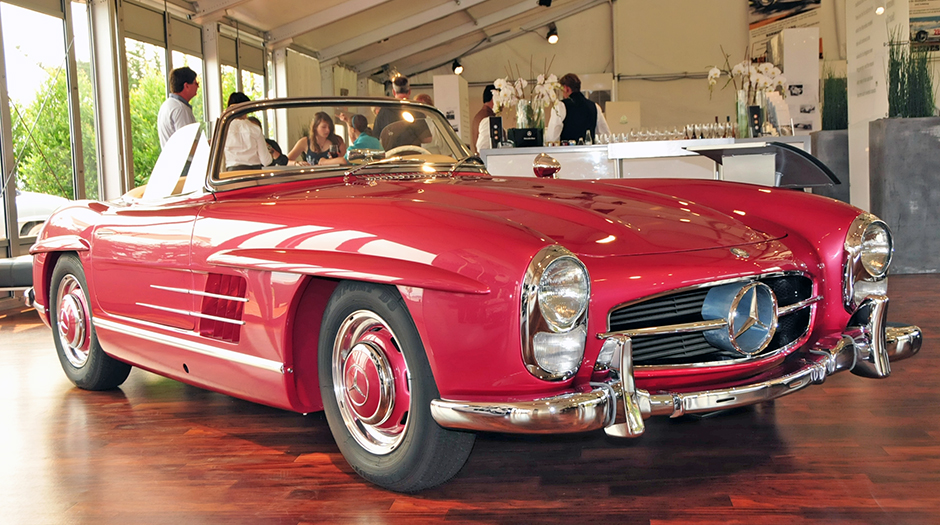 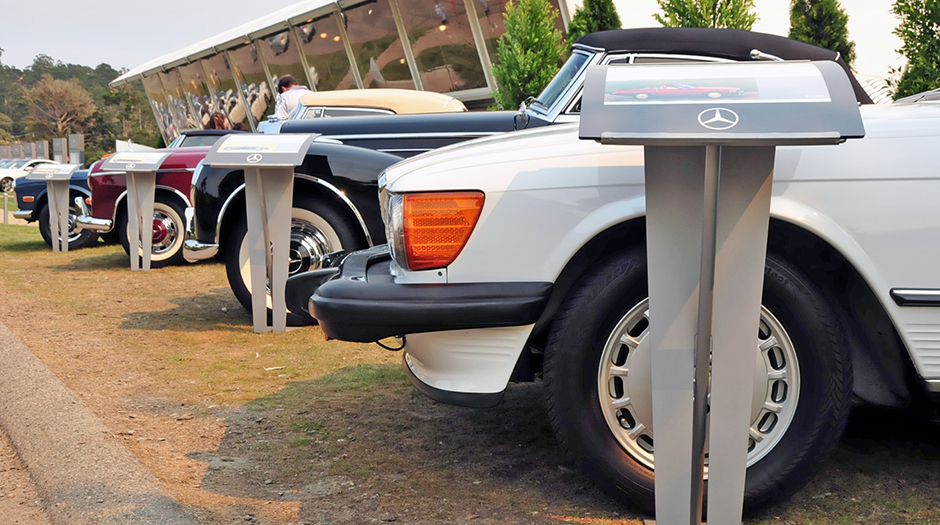 Adding to the general excitement enveloping the Classic Center’s Pebble Beach enclave was the appearance Saturday of the wild SLR Stirling Moss Edition. A pre-production example and not entirely functional, it was an impressive bit of muscular automotive sculpture. For obvious reasons, this 650 hp speedster will not be available in the US.

Talking with William Vetter, Assistant Product Manager for Maybach and SLR in the “Exclusive Vehicles Group”, revealed that right before the end of the USA production for the SLR last December, the final few vehicles were ordered in the rarest colors of the SLR color pallette. The intent was to make these final vehicles as unique as the 722s SLR Roadster special edition which officially commemorated the end of the USA production run.

I spied a bright Yellow roadster sitting behind the Mercedes enclave and it looked smashing. This privately owned vehicle which Mercedes-Benz welcomed to the display further illustrates how an such an iconic car can be even more breathtaking when paint color is unique. Vetter will undoubtedly now turn his attention to the latest “Exclusive Vehicle,” the fabulous new SLS AMG Gullwing.

We thank Mercedes-Benz Classic for another fascination Pebble Beach display. 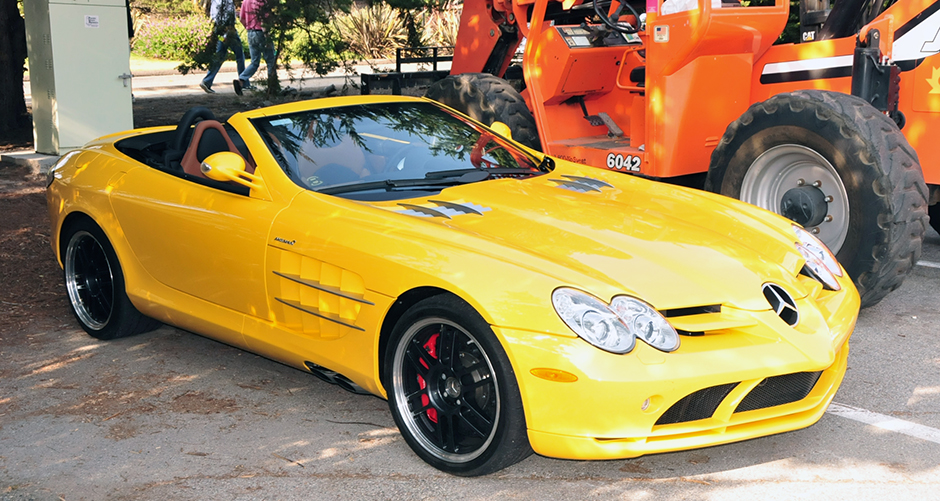 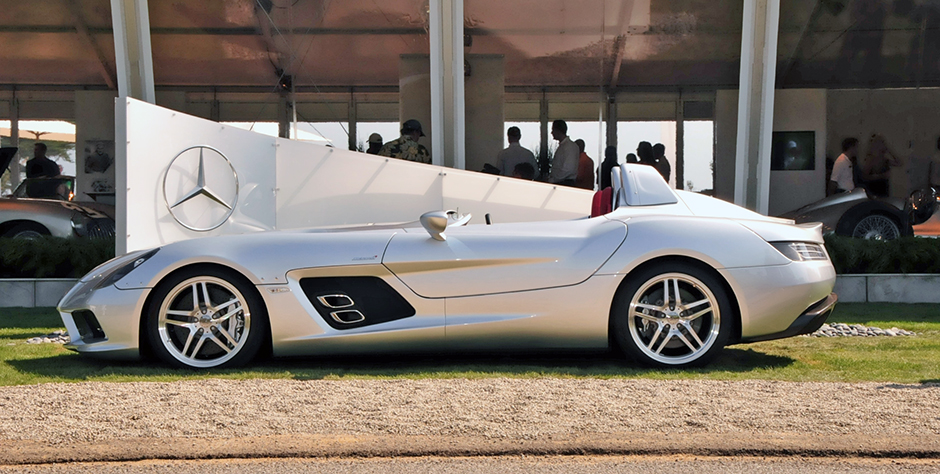 Top: Tired of Silver and Black SLRs? The final few SLRs produced have been painted in some wonderfully stunning colors such as this vibrant Yellow. Bottom: First West Coast view of the Stirling Moss Edition SLR caused plenty of excitement.