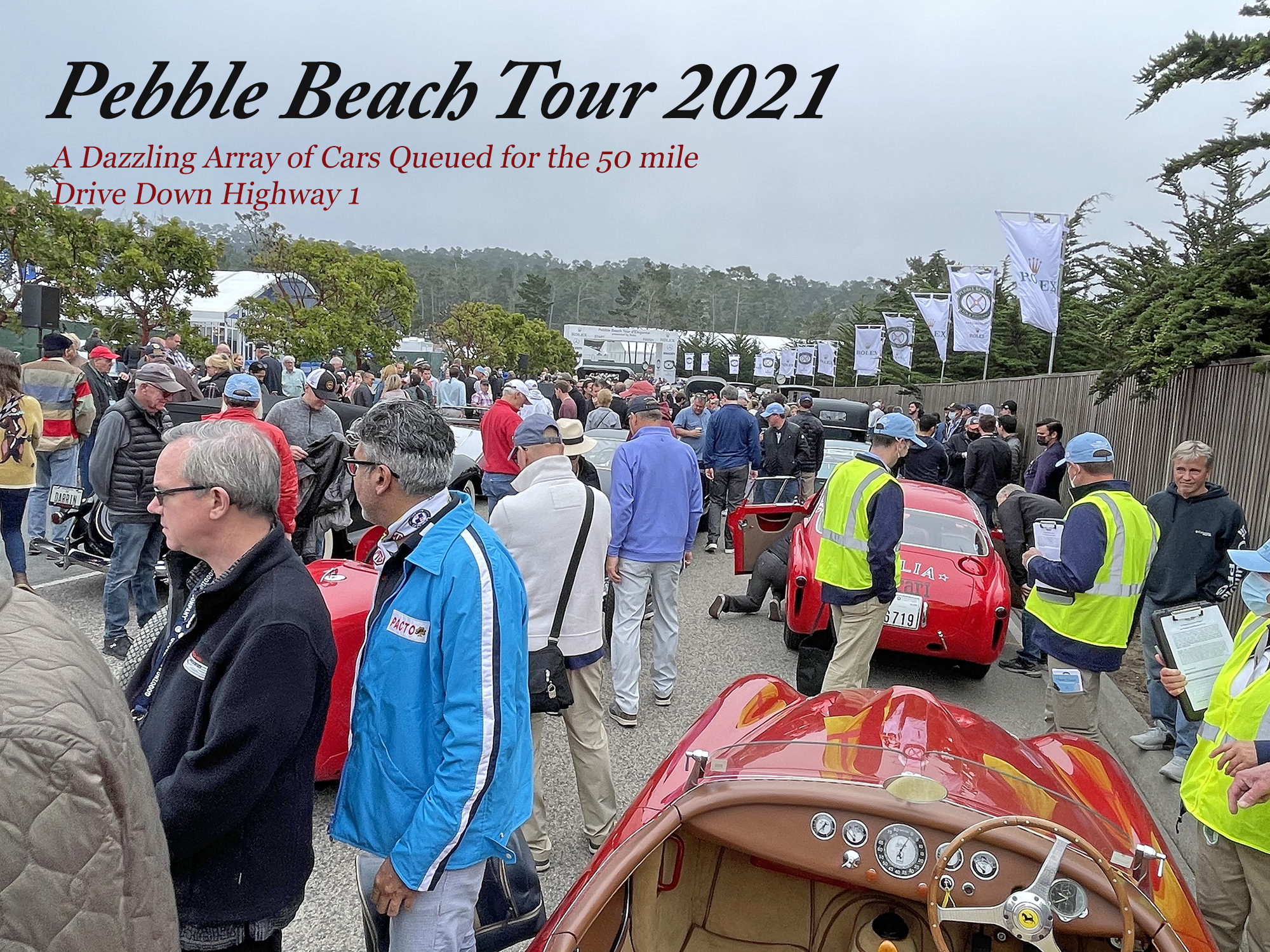 After being deprived of the glorious Monterey pilgrimage for a full two years, the crowd that arrived last August seemed ecstatic to again be wandering the peninsula among the amazing motorcars that embody all that is Monterey Car Week. For me the tone was set early Thursday morning as I wandered the Pebble Beach Tour de Elegance lineup arrayed above the Del Monte Lodge.

Walking elbow to elbow with enthusiasts from across the globe I encountered Rob Kauffman in driving suit and helmet warming his 1973 Porsche 917/30 for the 50 mile tour down Highway 1. A jaw dropping sight! I saw this car steamroll the Can-Am field at Laguna Seca in October 1973 with the man who developed the 917 Can-Am cars, Mark Donahue, effortlessly power sliding the car to victory while lapping the entire field. 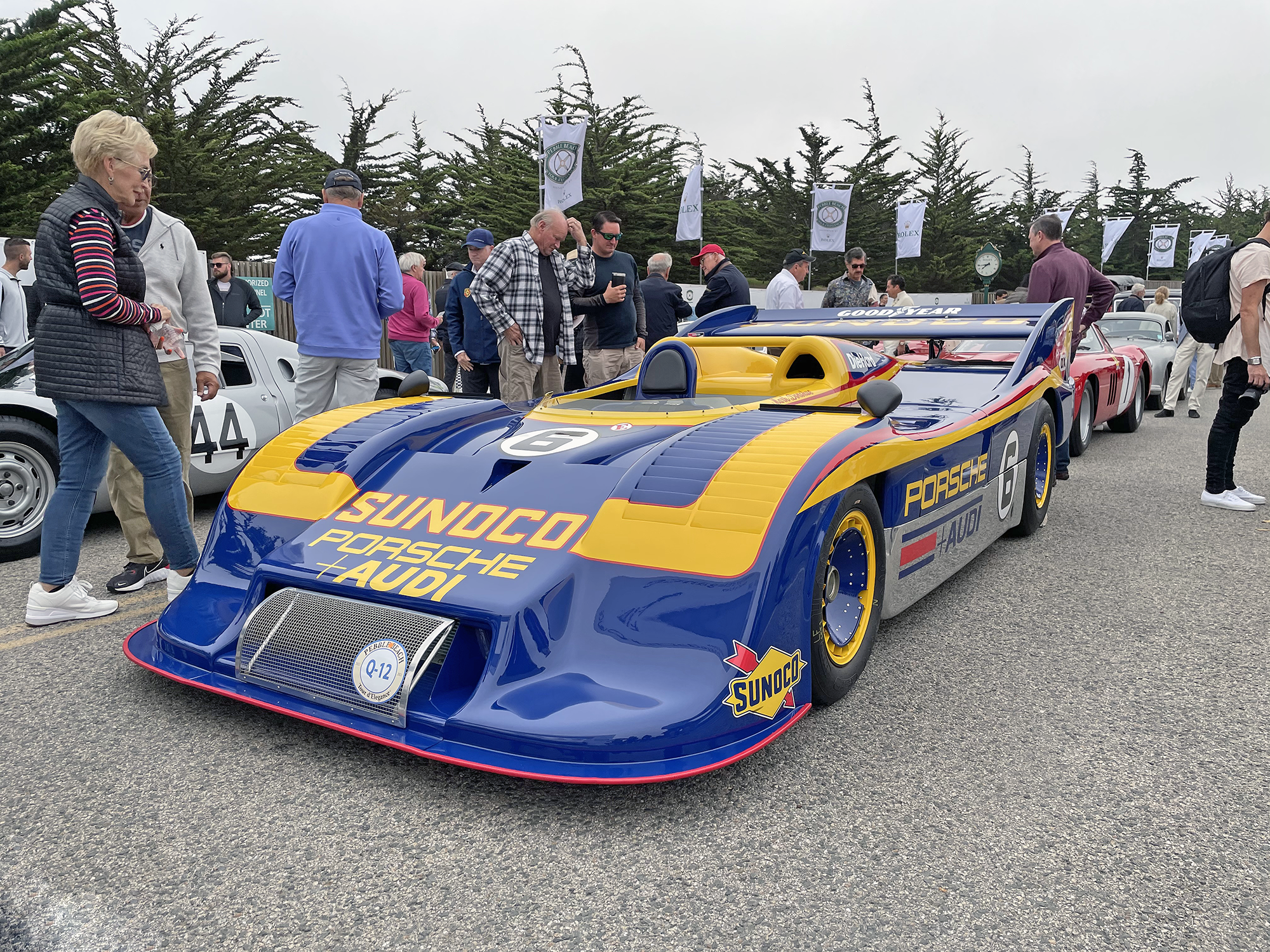 Ex-Penske/Donahue 1973 Porsche 917/30 awaits the arrival of its owner, Rob Kauffman. Low boost horsepower would be slightly north of 1,000 HP which must have been interesting to deal with heading down Highway 1. Mind boggling.

The next car almost brought tears to my eyes. The newly, and brilliantly, restored 1964 Ferrari 250GTO series 2 sn5573 was idling while owner Aaron Hsu slipped behind the wheel. Only three series 2 GTOs were constructed and my father owned the first example, sn5571 in 1964/65.

The sensations of riding with my father in 5571 during his Sunday morning drives came flooding back as I absorbed the sight, sound and smell of the Hsu GTO. These experiences with my father as a young man set the course of my career. Heady stuff and what Monterey Car Week is all about. 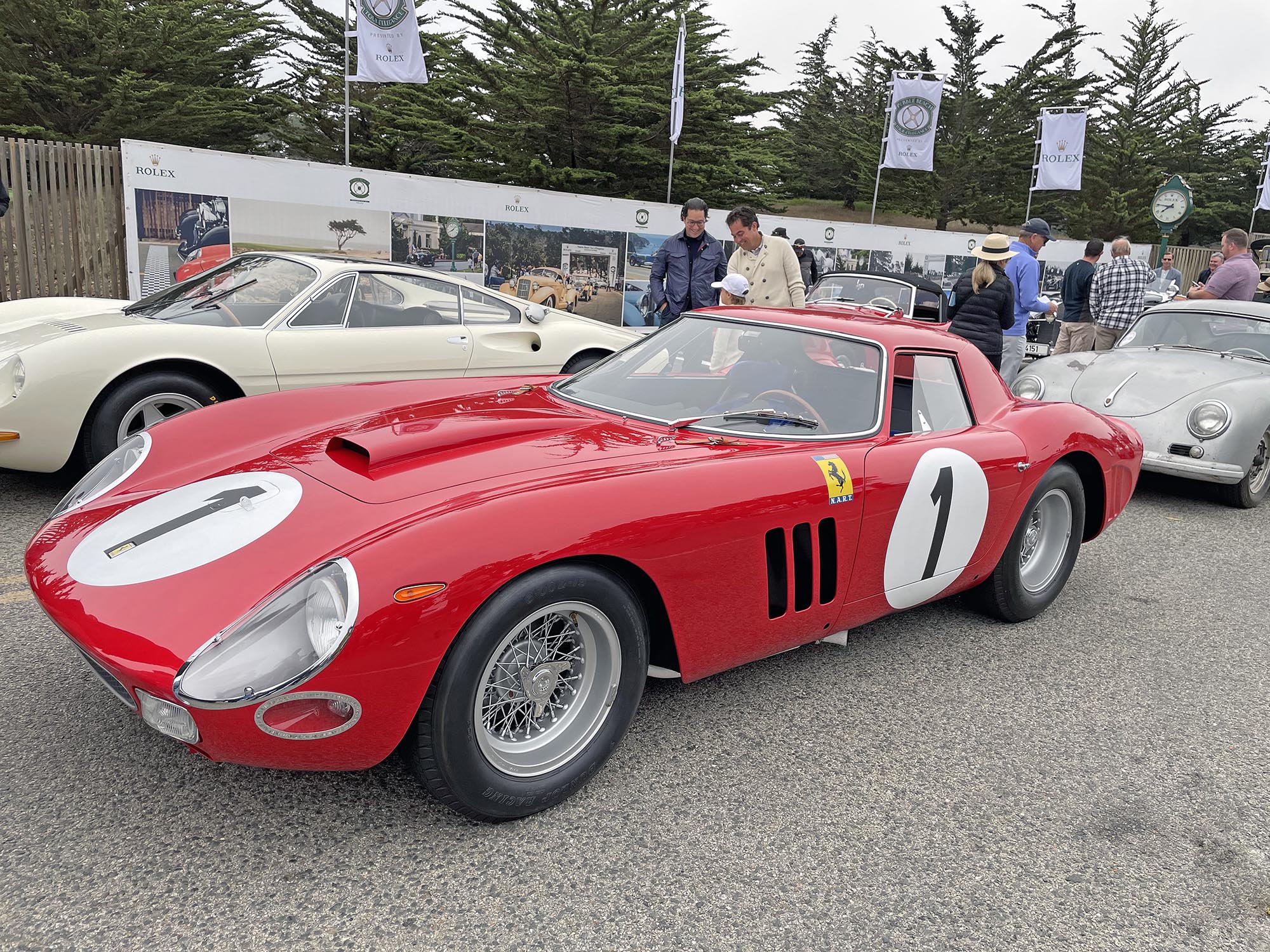 The middle car of the three 1964 series 2 250GTOs constructed, Aaron Hsu’s example looked absolutely brilliant in the early morning overcast. Cold air induction and side pipes are evident in this image. A diminutive and strikingly exotic car in the flesh. And what a noise.

Mercedes-Benz in the Tour

Let’s come back to earth and recognize the MBs that took part in the tour. One of the more interesting features at this year at Pebble Beach show were four classes celebrating 90 years of gorgeous designs from the house of Pininfarina. Generally acknowledged as clothing Italian sports cars, the firm did occasionally clothe cars from other manufacturers around the world. Including Mercedes-Benz.

An early PF Mercedes-Benz effort involved creating a pillarless 2-door coupe based on a 1955 300B four door. When the Pagoda was first released to the world in late 1963, Pininfarina took notice and approached Mercedes-Benz for authorization to construct a closed coupe based on the new 230SL.

The Board of Directors approved and under the guidance of PF’s newly hired American designer, Tom Tjaarda, the gorgeous 1964 230SL Pininfarina Coupe was created. And we were treated to another glimpse of this supremely stylish car at Pebble Beach. 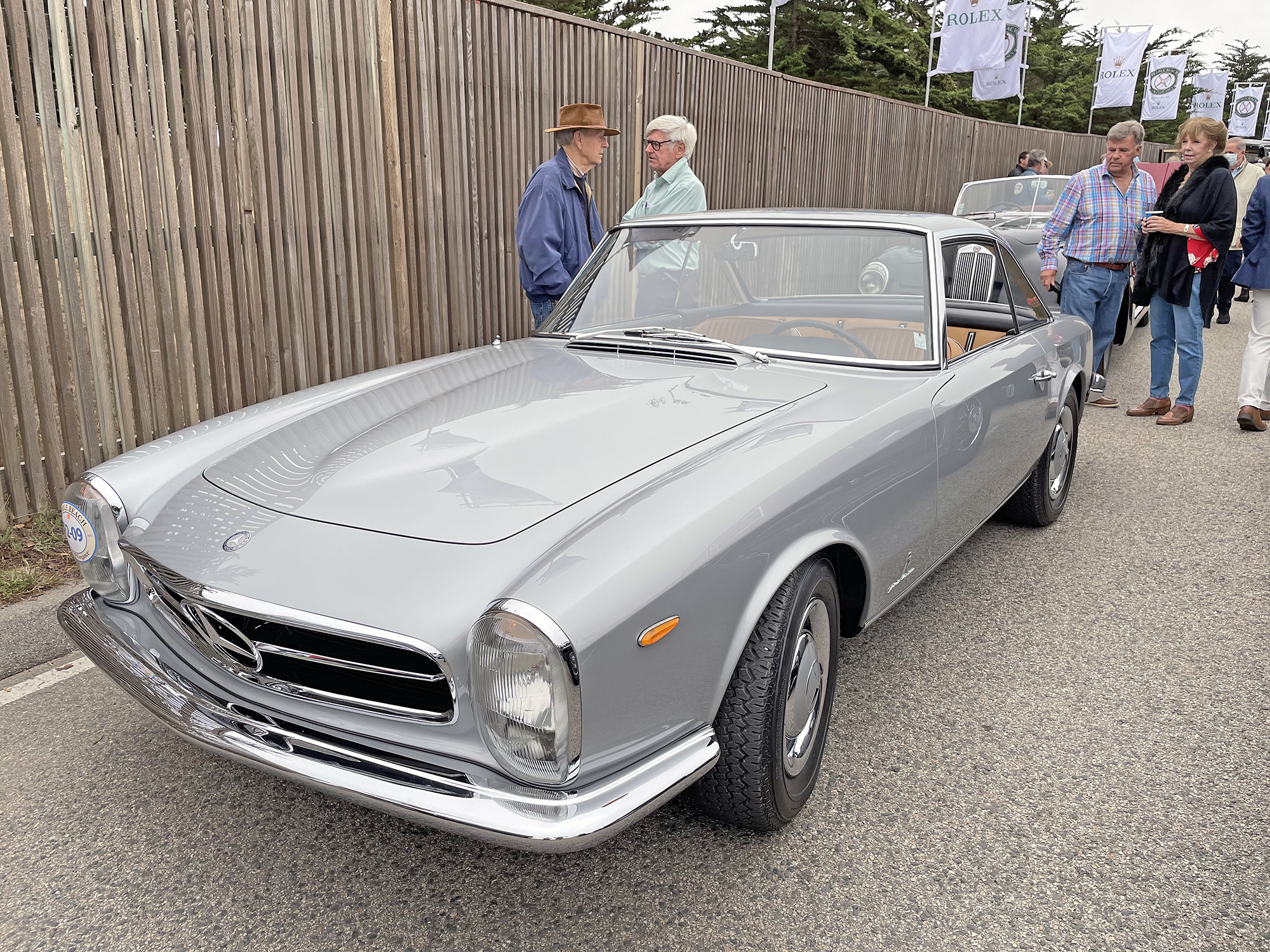 Pininfarina’s Tom Tjaarda stretched and massaged the upright and sober original 230SL design to great effect. In fact it has been said that about 30 customers expressed interest in acquiring one while the car was displayed at the 1964 Paris and Turin shows. Only one was constructed and it’s always a treat to see it in the flesh.

The Prewar/Postwar Preservation classes have become two of my favorite groups over the years and it’s always exciting to see what the car selection committee has unearthed each year. This tatty 1955 300SL Gullwing certainly looked the part of a ‘survivor’ but it was immediately evident that the car had been color changed from silver to the current blue metallic.

This begs the question of whether a car that has been entirely repainted should qualify for the class. I vote for a high percentage of original paint be present to be considered for this class as well as the car still in at least a facsimile of its original color. 100% original paint is generally unobtainable, but I feel a full color change should be a no-no for this class. 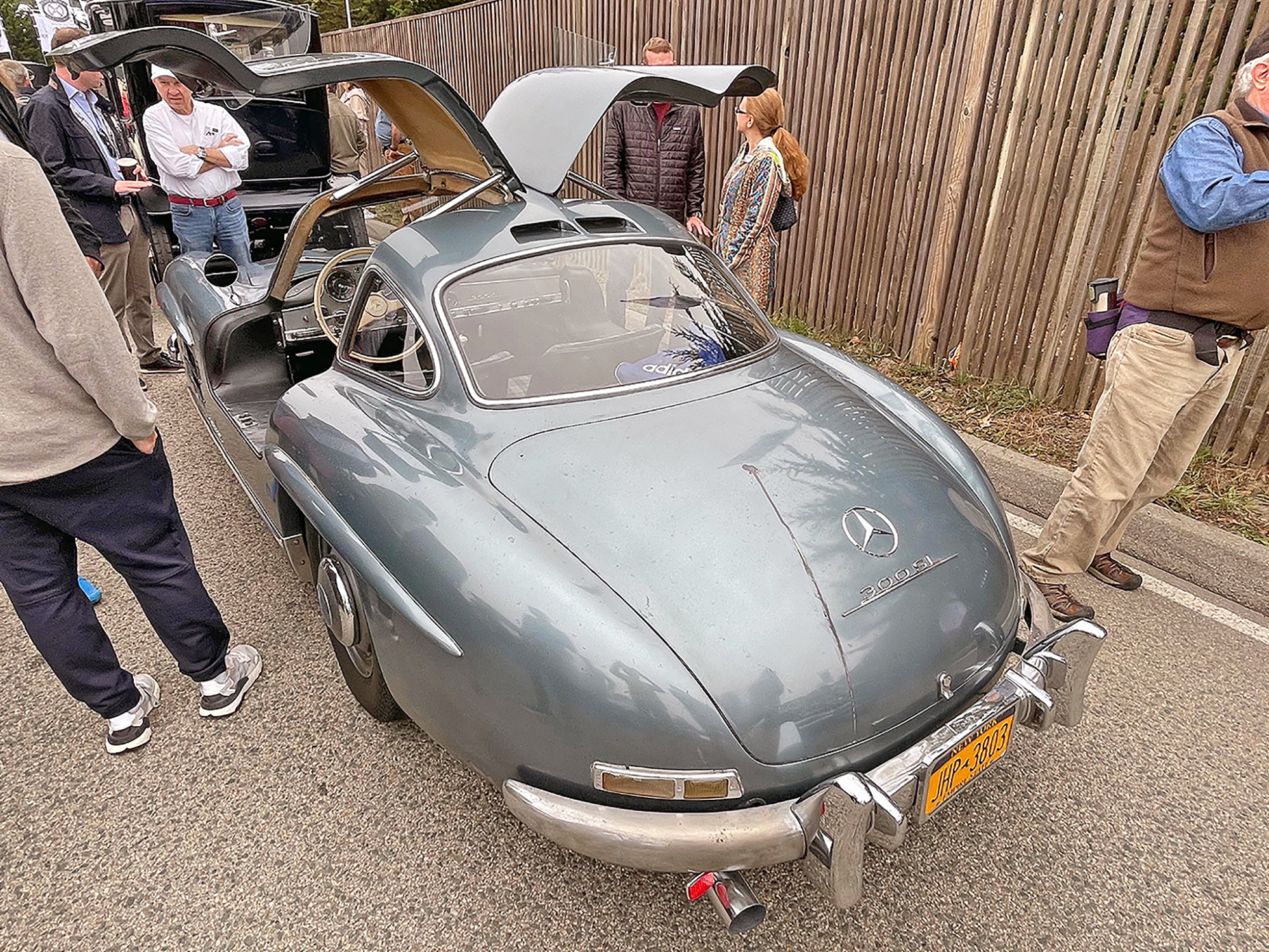 I admit to be weary of the preponderance of better than new 300SLs. This parallels with the recognition – and appreciation – of ‘preservation’ examples that has occurred over the last 20 years. While full restorations are often unavoidable the result can come across as ‘soulless’ for lack of a better word. I’ve just acquired a Gullwing that has an endearing subtle patina of age, particularly the interior, for a client. I’ll have a heart attach if the next owner restores the car and erases the character the car accumulated over its last 67 years of gentle use in California.

Mercedes-Benz led the pack with W194 #5, the car driven by Lang/Krupp during the 1952 Carrera Panamericana. The W194 represented ground zero for the 300SL Gullwings we identify with today. In period the W194’s were raced as roadsters as well as coupes. Herman Lang and Fritz Reiss shared #7 to win Le Mans in 1952. This was an amazing achievement for Mercedes-Benz in early postwar Germany. The W194 successes portended Mercedes’ total domination of motor sport in 1954/55. ` 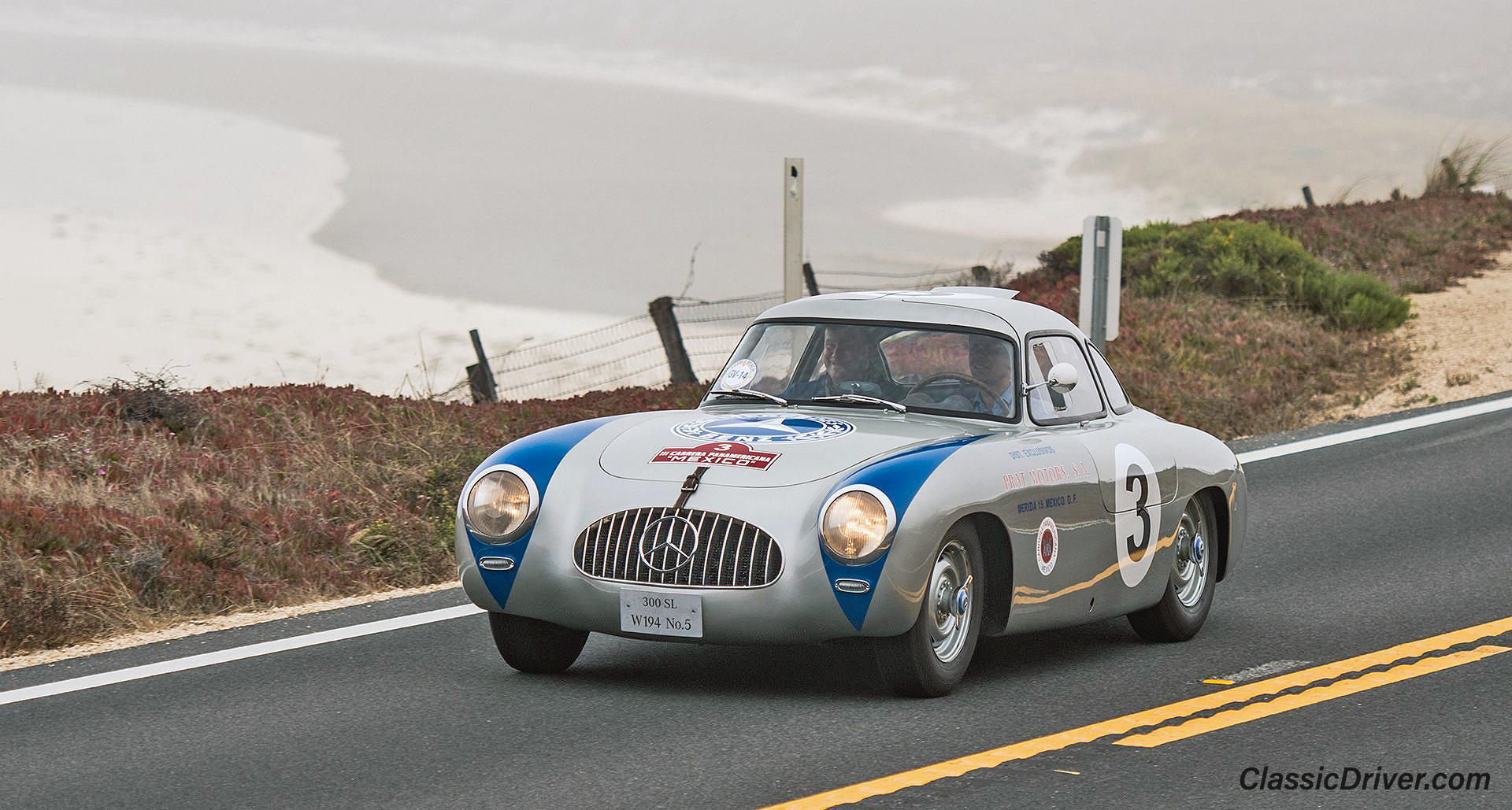 W194 #5 making its way down the California coast. The car’s slippery shape is apparent here and we see the angry grille configuration that inspired that of all AMG models today. 170ish horsepower out of a 3 liter cast iron six fitted with 3 solex carburetors.

In keeping with MB’s spirit of celebrating the arrival of the latest SL, the MB Classic Center also brought out my favorite W194 iteration, #11 and the last W194 constructed. Also known as the Hobel (carpenter’s plane), due to its sharply hewn nose, this 1953 300SL is far more exotic than all the W194s before it. Fitted with fuel injection – raising the power to 214 HP – and a transaxle, this SL was to be the basis for the Factory’s assault on the European Sports Car championship in 1953.

Plans changed late in 1953, however, and the Competition Department turned its attention back to Formula 1 in an attempt recapture its prewar domination of that formula. And that it certainly did in 1954/1955 with the creation of the all conquering W196 models augmented by the 300SLRs. Focus for the 300SLs turned from competition pursuits to creating a world beating production grand touring car. I feel fortunate to have an example of the result sitting in my warehouse at the moment. 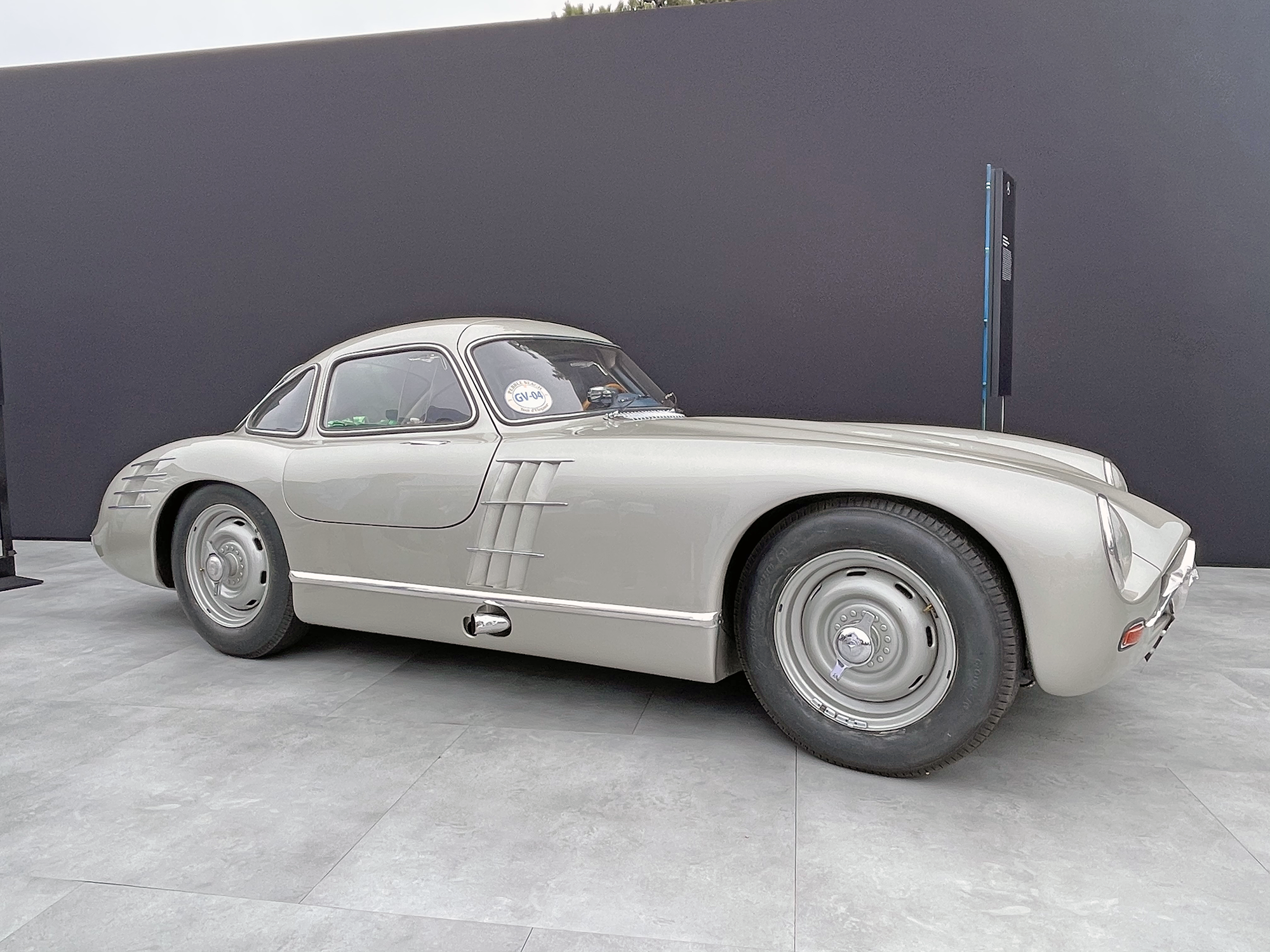 W194 #11 is the most exotic W194. You’ll notice the car is far more compact than the earlier W194s due to both its 3.9″ shorter wheelbase and narrower track. 16″ wheels are apparent here and the massive front and rear fender vents dictated by wind tunnel testing to relieve under body pressure are clearly seen. Quite an intriguing car.

Notably absent from the Tour was eventual best of show winner Arturo Keller’s 1938 Mercedes 540K Autobahn Kurier. This despite the benefit of participating in the Tour in the event of a scoring tie on Sunday. The sleek 540K will be covered in my Pebble Beach Concours article coming soon.

After my few days in Monterey, somehow all seemed normal again in what was then and still is a decidedly abnormal world. I can’t wait for next year. You can view all the Pebble Beach Tour participants heading out to Highway 1 in the video below!