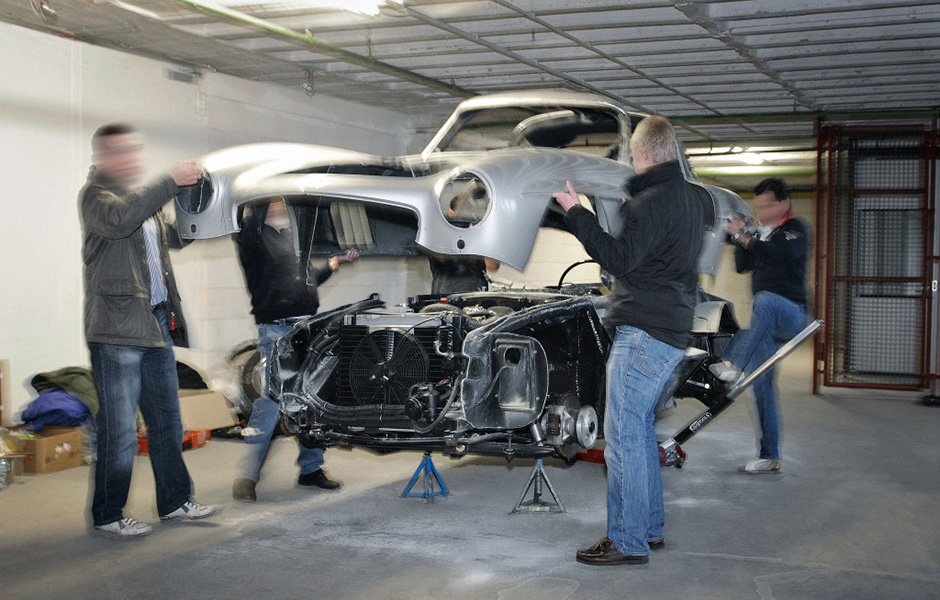 Is this the moment of truth in a Gullwing restoration when the body is once again joined to its chassis? Not quite. We’re looking at the bowels of the Mercedes-Benz Used Parts Center and this particular Gullwing body is being crudely removed from its chassis to be crushed and disposed of.

Ever mindful of the impact of poorly conceived replica Gullwings on its heritage brand, Mercedes-Benz recently seized and destroyed a German built Gullwing replica’s fiberglass body. For decades the Silver Star has viewed any road going copy of the iconic Gullwing shape with derision, particularly those with badging as per the original. During the ’80s Tony Ostermeier’s generally respected Gullwing Cars operation in California skirted the badging issue by delivering their replicas with altered grille/deck lid star designs and no ‘Mercedes-Benz’ or ‘300SL’ insignias. Predictably, as soon as new owners took delivery of their cars, an original grille star and original insignias were installed. Other replicas employed similar trickery to avoid attention from Stuttgart.

This will no longer be tolerated by Mercedes-Benz. Badging or no, the glorious Gullwing shape is a work of ‘applied art’ and has been under copyright protection for decades. It’s the enforcement that has been spotty. That is, until 2012. Emboldened by a December 2010 Stuttgart regional court’s ruling affirming the Gullwing design’s copyright status, Mercedes stepped up investigating copyright violations. It is not legal to copy the Gullwing design – at least not in Germany. Gullwing AG, a German firm which planned to introduce a new Gullwing using the original Ostermeier plans and fitted with modern drivetrain, was shut down shortly after the court ruling.

“However, as well as the creators of this vehicle copying our parts and designs, the use of the Mercedes-Benz name and logo is in clear contravention of our trademark rights and we will look seriously at this.” 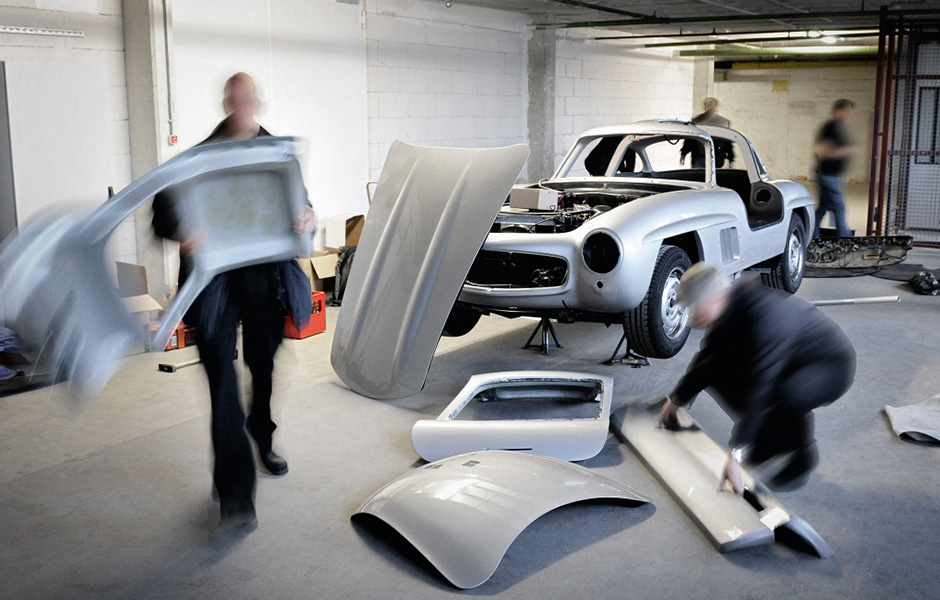 Copyrighted design elements being unceremoniously removed from a built up ‘Gullwing.’ Evidently the replica was constructed in Germany.

Daimler Media’s release outlines Mercedes-Benz’ attitude succinctly, “A case had arisen in which a company based in Germany had built an unlawful replica of a Mercedes-Benz 300 SL.” The replica was seized by German Customs officials which may indicate the car was being processed for export. While the entire experience had to be a nightmare for the owner, he/she likely did receive the rolling chassis back after its illicit body was unceremoniously removed and crushed. The issue involved the coachwork only. Case closed for this particular replica. 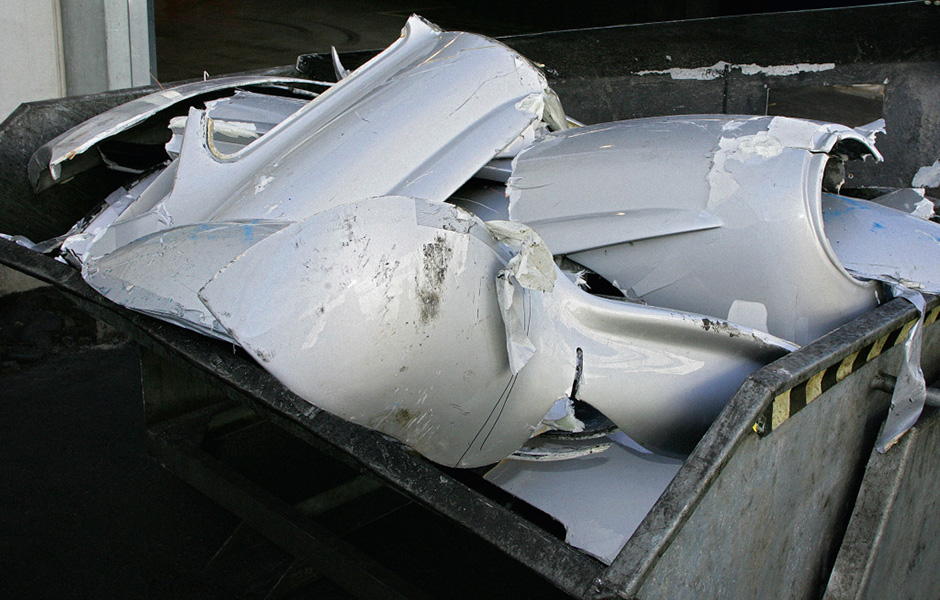 This photo makes a strong statement indeed. The offending body has been officially destroyed by ‘certified equipment’ and officially documented with a signed and stamped ‘confirmation of scrappage.’

Stuttgart’s attitude toward protecting its cherished Gullwing shape is now clear but how will the Factory react to the specter of not one but five EXACT duplicates (4 open wheel versions and one streamliner) of the epic 595hp 1937 W125 Grand Prix car? Two have been completed and one was featured in a massive article within the February 2012 issue of the superb Octane Magazine. The brainchild of the now deceased historic Grand Prix disciple, Tom Wheatcroft, this project began in 2003 and has VERY quietly yielded two cars. Wheatcroft’s plan was to amortize costs by building five, selling 4 and placing the remaining car in his extraordinary Donington Park Racing Car Museum located within England’s Donington Park racing circuit.

With Wheatcoft senior’s death, son Kevin stepped in enthusiastically and kept the project moving ahead, utilizing the best fabrication shops in the world that conveniently happen to be located in England. This program is producing not just ‘replicas’ but, according to reports, DUPLICATES of the original car. How is this possible? The team’s mysterious acquisition of 2,500(!) original drawings and access to two of the original cars that escaped the factory into private hands has insured a mind bending level of accuracy. We must credit the extraordinary fabrication and research skills of Crosthwiate & Gardener and master coachwork fabricator Roach Manufacturing as well. 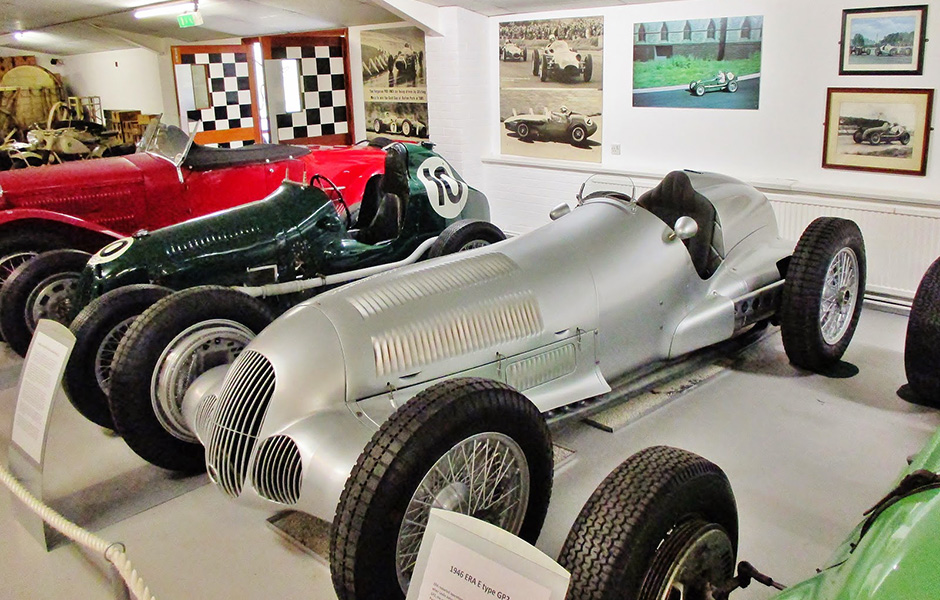 The Wheatcroft ‘toolroom’ W125 replica sits in their museum. Owner Kevin Wheatcroft has been able to live the dream of any pre-war Grand Prix nut – power sliding a virtual duplicate of one of the awesome Silver Arrows of the latter ’30s Grand Prix era. Note the lack of Mercedes-Benz badging on the nose.

How does Mercedes-Benz feel about this project which comes to fruition the same year it decides to actually race it’s W125 in selected top tier historic events? Michael Bock, CEO of Mercedes-Benz Museum GmbH and Head of Mercedes-Benz Classic, responded with a tactful but revealing statement also in Octane’s Februry issue, “The Mercedes-Benz w 125 is an iconic racing car, and whilst we can see the logic in companies recreating those cars lost forever, like the Auto Unions and Von Trips’ ‘Sharknose’ Ferrari, there’s no justification to create a facsimile of the real deal, especially when these cars are still regularly shown.” Bock continued by citing trademark issues, “However, as well as the creators of this vehicle copying our parts and designs, the use of the Mercedes-Benz name and logo is in clear contravention of our trademark rights and we will look seriously at this.”

Mr. Bock closes with, “We support – at any time – all collectors of original Mercedes-Benz cars with all the passion, experience and knowledge we have but we have no understanding (tolerance? ed.) for facsimiles of the real deal.” Strong if slightly veiled words. We have a feeling none of Wheatcroft’s W125s will see German soil anytime soon. This fascinating saga centering around the passion for and protection of two of Mercedes-Benz’ most enduring and cherished sporting creations is certainly going to evolve. I feel there will be more confrontations ahead. 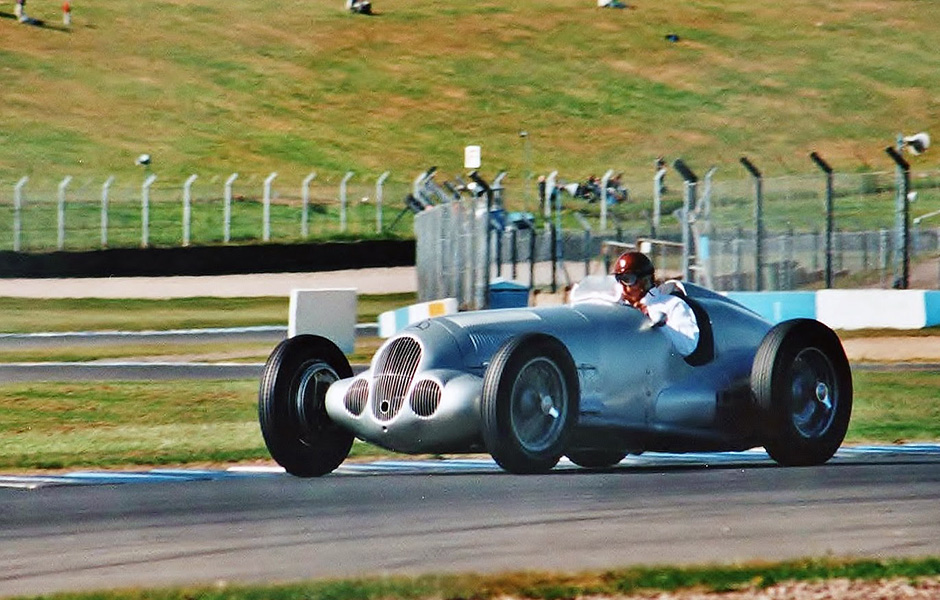