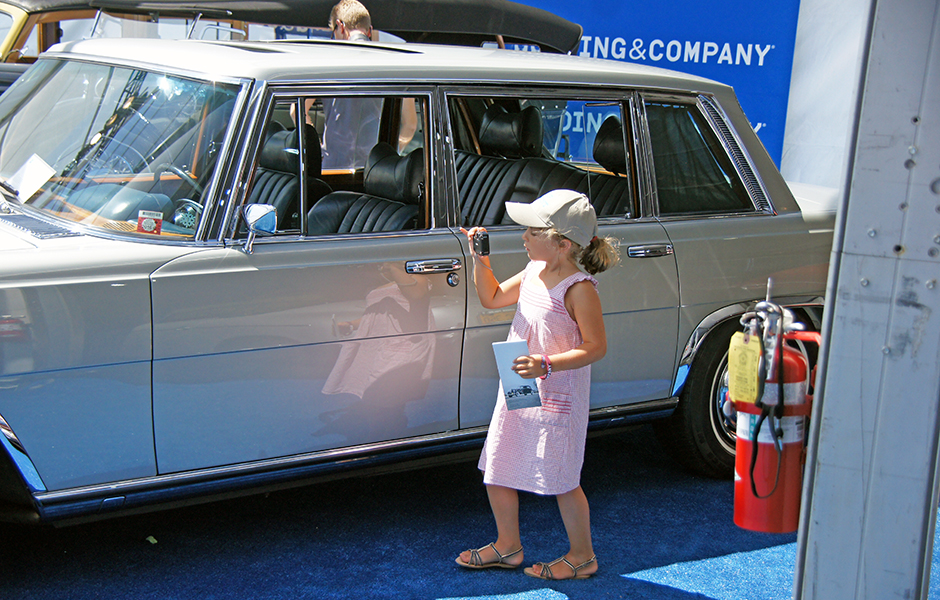 The cycle of renewal for Pebble 2016 begins after the bags are packed and the reservations are made for next year. With a bag full of programs fit for an Olympic weight lifter, I check the fuel in my E55 before I make the dash back to Santa Barbara. My realization that the week-end that I had anticipated since my motel reservation was made more than 360 days ago was over was just beginning to sink in.

As I head north, I will start the rewind of the past four days as I pass one classic straggler after another on highway 101. These are the hardy souls who weren’t transported to the past week’s activities. It gives you pause to realize you are passing a 300SL Gullwing and enjoying the splender of an iconic motor car worth a million dollars as it motors on literally inches from peril.

The NY Times recently included Pebble Beach Concours d’Elegance as a stopover for the super rich to keep busy this summer. Somehow, all generations and socioeconomic groups really blend to enjoy and discuss the pros and cons of the show. The entries in the preservation class have sparked enthusiasm in all circles and I believe it’s not long before one these beauties is “Best of Show.” I even remarked that the Classic Center would soon have a part number for the dust to match the region of the find.

“Sunday is the DAY…it’s hard to describe the impact a couple hundred examples of the best cars in the world has on the crowd. In the midst of these cars I see the awesome “722” 300SLR sitting there naked.”

My marathon began with a 7AM rendezvous with some press colleagues that kicksedoff a 14 hour day. As night falls, we had covered pit row at Laguna Seca, Gooding and Company, the Porsche Reunion, the Mercedes Pavilion, Quail Lodge, a quick peek at some downtown auctions, and most uniquely, the commemorative re-enactment of the legendary Pebble Beach Road Race.

Started in the early 50’s, this race covered a course of about 2 miles through the pines of the Del Monte Forest on the 17 Mile Drive. During the 1956 race a fatal crash removed the race permanently from the public roads, relocating it at Laguna Seca. This year, vintage Ferrari racers of that era provide the “red” along with the exciting sounds associated with these models

A Ferrari 166MM Touring Barchetta led the parade of the immaculately presented group of veteran Ferraris. There were some emotional words from Phil Hill’s widow Alma who talked about Phil’s love of the race and his last ride retracing the twists and turns of his two victories there. The nostalgic, slow motion start began with an engine roar that may have collapsed a hearing aid or two. After three or four laps with various friends and VIP’s riding along, the cars retired to ready themselves for Sunday’s Concours.
House of the Holy

The massive white portable pavilion Mercedes erects every year dignifies the brand like no other at Pebble. With massive windows this is as good as it gets. If you can tear yourself away from magnificently presented Mercedes Benz motor cars for a second, one might catch a glimpse of the California beauty of the Pebble Beach environs.

The cathedral-like proportions of this space pay homage to the past and future and celebrate the heritage of Mercedes-Benz. At center stage was the famed 300 SLR #722, the holy grail of automobile racing during the ’50s. As you read the history of the car and Sir Stirling Moss’ Mille Miglia record, the thrill of that accomplishment over 60 years ago grips you even if you’ve read it many times before. Curious about the 1000 mile name in a metric country, I found a reference to a reaction to the 1200 kilometers covered in the initial race…”why that’s a 1000 miles,” and that very nice alliteration stuck.

Close by other examples of precision work by the Mercedes Classic Center were beautifully displayed and demonstrated vehicle restoration at its finest. Maybach is back in our vocabulary with an S-Class look and a new name; “Mercedes Maybach.” That should have been the designation all along. A real Maybach from yesteryear stood by to remind us that there really was such a marque. The stretch version was on display apparently for its “shock” value. It was juxtaposed to the godfather of limousine luxury, the original 600.

The 600 looked very comfortable in its skin and even at about the same length as the new cousin, it seems understated probably because of its height. At the Gooding Preview I saw a 5 year old with a point and shoot staring down a 600 grill clicking and then gleefully seeking approval by showing it to her dad. In front of the exhibit hall there is typically a theme..E-Class, SUV’s, etc. This year it was the new GTR in yellow with some friends enhancing its evolution. I commented on the Gullwings, and was reminded that they were “retired” not “discontinued.”

“Between the Concorso Italiano, the auctions, and just plain owners, it seems every Ferrari ever built was on the Monterey Peninsula this week.”

Sunday is the DAY. It’s hard to describe the impact a couple hundred examples of the best cars in the world have. In the midst of these cars, the awesome “722”is again sitting there naked. Hundreds are milling around, flashing, clicking, or just standing near by absorbing its radiance.

“What exactly am I witnessing,” many wonder. You don’t have to imagine what Sir Stirling is like. He may appear at any moment in his golf cart immaculately dressed and clutching his convertible cane seat. And he did just that! For some time now, I have worn a”722 tie” with my blue blazer and straw hat but I never had the tie, the Sharpie, and Sir Stirling all together for a signing. Finally, it all happened and he was delighted to autograph my prized tie.

After the overall winner was announced, it was back to Carmel. The winner had a long name that I can’t spell but I do know there was no star on the grill. The judges do the impossible, but to many they are all winners. The big loser is the grass at the iconic 18th hole where several thousand walk around for a few hours.

I had dinner, a few interesting post mortems, and a final look around town. Ferraris were still strutting their stuff. Between the Concorso Italiano, the auctions, and just plain owners, it seems every Ferrari ever built was on the Monterey Peninsula this week. I seem to always find a jewel like a 190SL to sooth my nerves among the excesses of the Italian car industry.

Then, it was back to the motel to pack my bags and the “Life Cycle of Pebble Beach” began once more in anticipation of next year’s adventures. 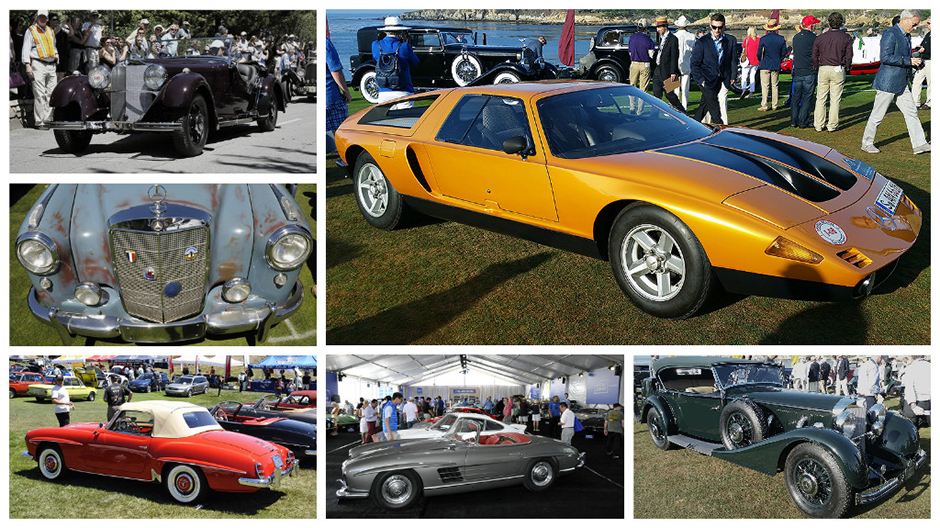 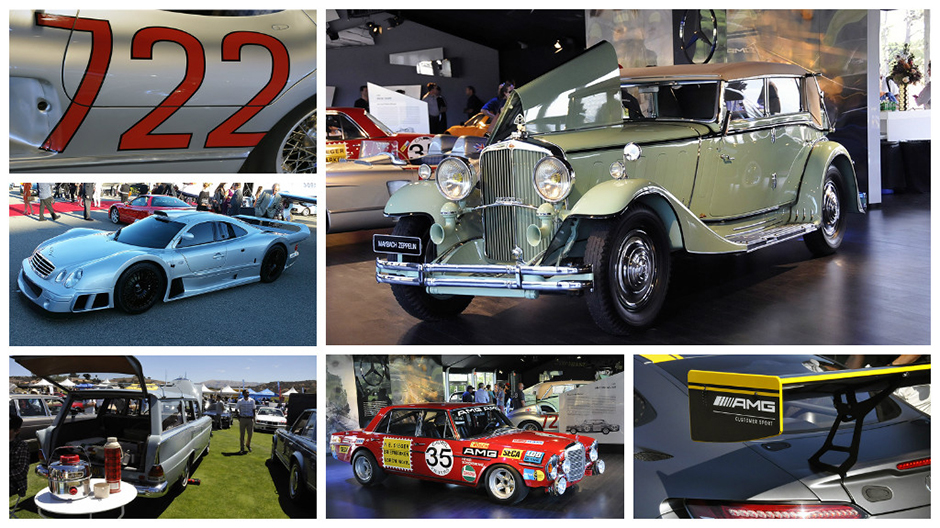 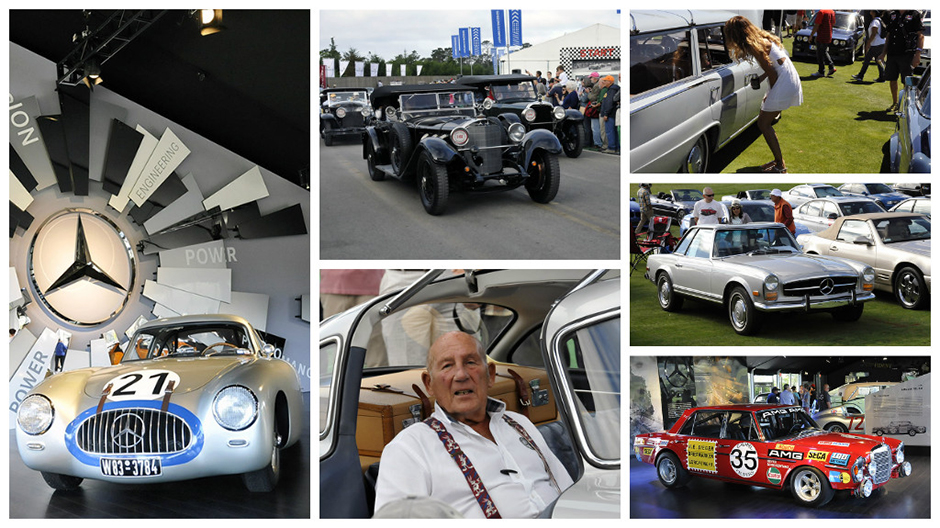