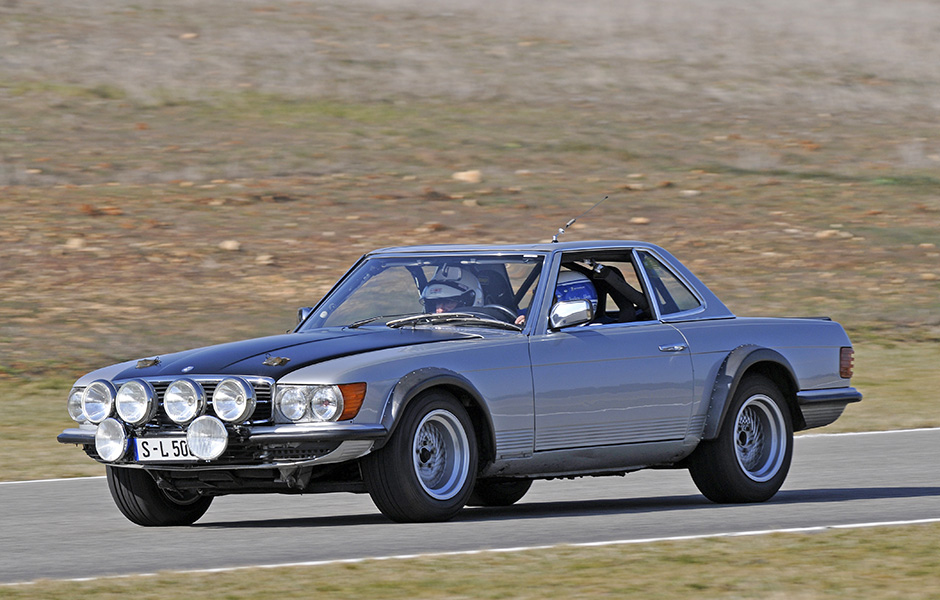 The stillborn 1981 500SL will make a rare appearance during the August 3-5 Schloss Dyck Classic Days. Frankly, we never knew this car existed.

Mercedes never ceases to surprise us. A few months ago the media center casually released images and comments relating to the long rumored 6.3 liter V8 Pagoda that was briefly evaluated in 1968 before being crushed. And now we have received information on what is perhaps the only 107 series SL ever seriously prepared by the factory for racing.

The success of the 5 liter SLC rally program is well known: The factory team of lightweight SLCs finished a credible 4th in the 1980 World Rally Championship. With its rather long wheelbase, the SLC was an unlikely candidate for rallying where the ability to quickly rotate the car during during tighter stages was essential. The SLCs high ‘polar moment’ was not lost on the engineering team headed by Erich Waxenberger and plans were initiated to replace the SLCs with the far shorter and more agile SLs in 1981. 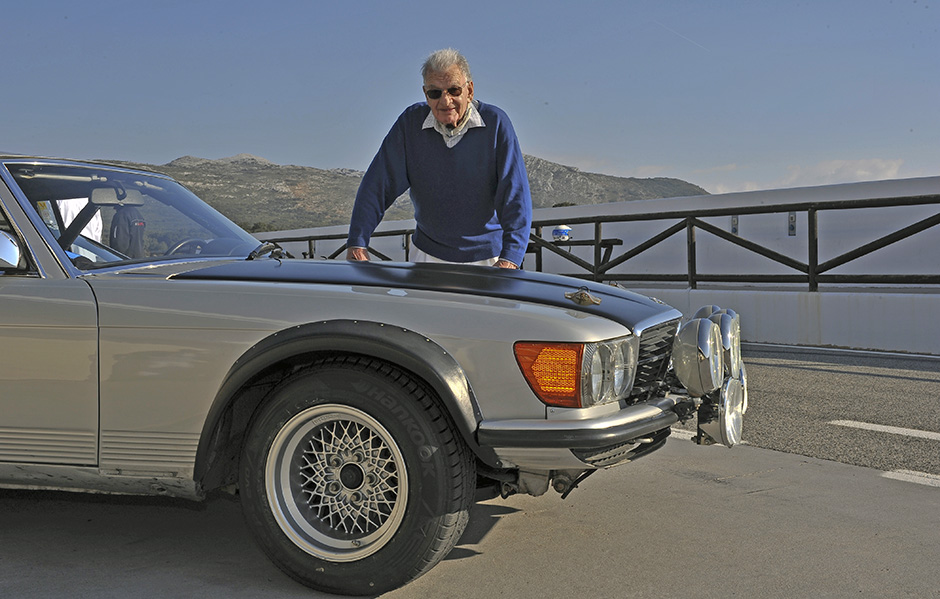 Mercedes-Benz’ prolific engineer, Erich Waxenberger, poses recently with the 500SL he created for the 1981 World Championship Rally season. We see the ’80s era BBS wheels, standard bumpers perhaps in aluminum and massive lamps for high speed night stages. Rocker and side moldings have been removed as has the production car’s shallow front chin spoiler.

After 1980’s fourth place finish in the World Rally Championship, Mercedes prepared four 500SLs for the 1981 season for a driver lineup headed by then top international rally star, Walter Rohrl. The SLs were prepared in a similar fashion to the earlier SLCs receiving the 320hp M117 engine, a very short final drive ratio fitted to a limited slip differential and the other modifications essential to rally success.

Removing any unnecessary items from the standard SL resulted in a vehicle weight of just under 3,000 lbs despite the addition of an alloy roll cage and massive night driving lamps. Rohrl carried out extensive testing with the new rally contender from Stuttgart. However, marketing priorities changed in the boardroom and all rally plans for 1981 were terminated. 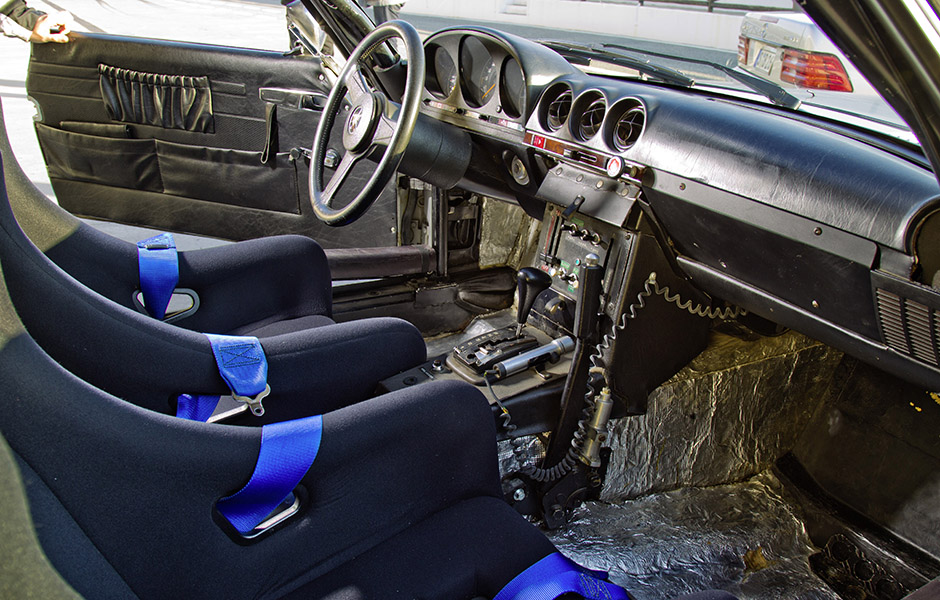 The rally 500SL’s interior is generally all business although we can see some of the original street 500SL’s burlwood below the center dash vents. The shroud above the temp controls seems to be a light to illuminate the switchgear. Door panels are fitted with extra pockets to store route maps, and checkpoint paperwork. Extra deep seats were required to keep driver and navigator securely planted in the car while navigating chaotic and rough rally terrain. Ken Block fans will recognize the massive black emergency brake lever right of the transmission tunnel used to instantly pivot the car when necessary. Corded aluminum cylinder on the console is either a flash light or microphone.

Aside from the 1979-1980 SLC rally program and the stillborn 500SL project of 1981, factory racing projects focusing on the 107 cars were virtually non existent. However, dedicated privateers pressed on with some interesting 107 projects both in period and currently. 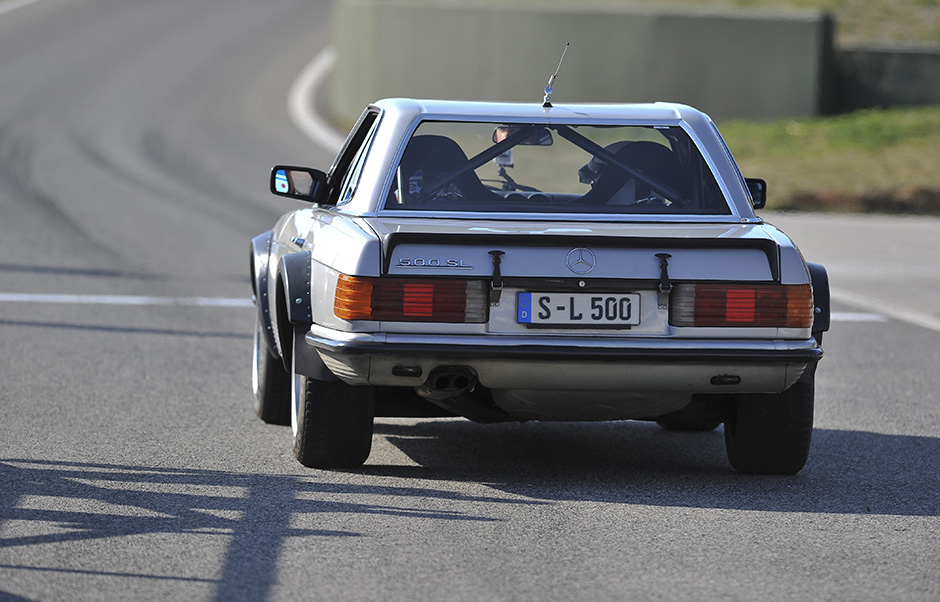 Unfulfilled promise: Who knows how the factory 500SL would have fared in 1981 against Ari Vatanen’s agile 270hp Ford Escort RS1800. We’ll never know.